Accessibility links
Kevin McCarthy Could Be The Next Speaker. Is He Still A 'Bakersfield Boy'? : It's All Politics Many of McCarthy's Bakersfield, Calif., constituents like him, but he's riled some Latinos over immigration and been criticized by conservatives for compromising. 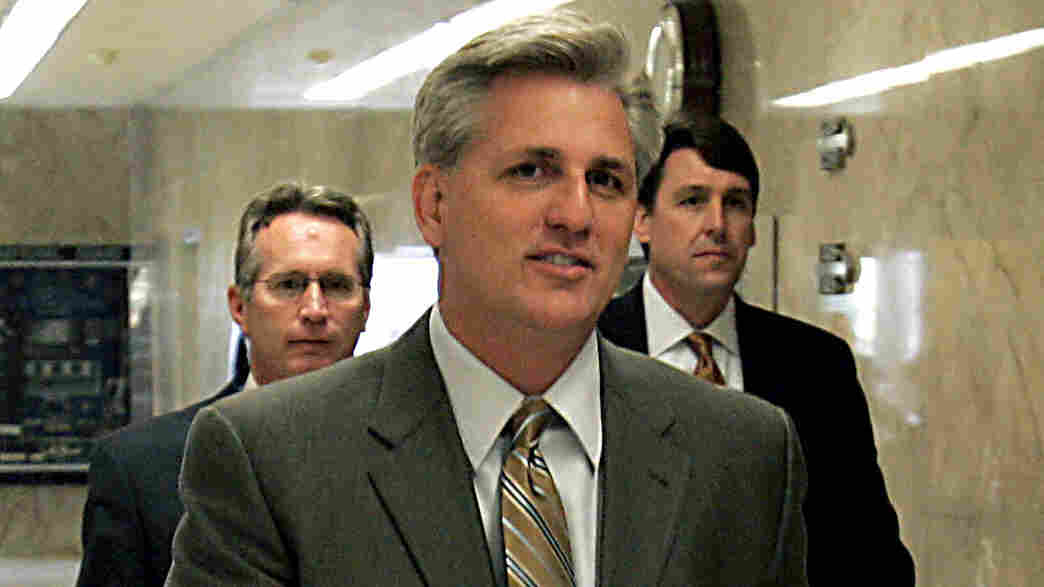 Kevin McCarthy, then in the California Assembly, walks to the governor's office at the Capitol in Sacramento in 2006. Rick Pedroncelli/AP hide caption 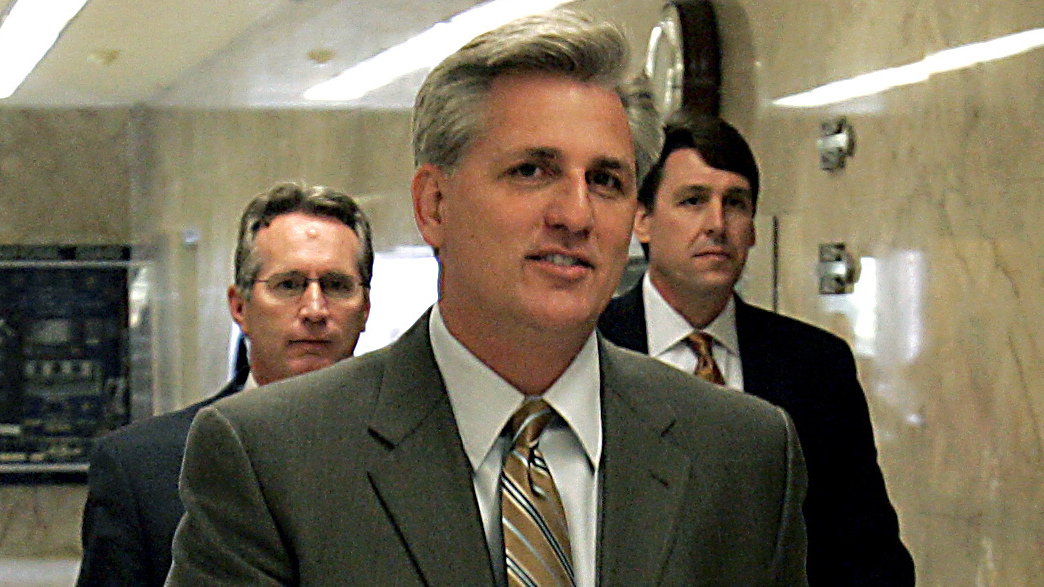 Kevin McCarthy, then in the California Assembly, walks to the governor's office at the Capitol in Sacramento in 2006.

Republicans in the U.S. House will take an initial vote Thursday on who they think should replace John Boehner as speaker of the House.

Utah Rep. Jason Chaffetz recently announced his candidacy for speaker, but the front-runner for the job is current House Majority Leader Kevin McCarthy, a Republican from Bakersfield, Calif.

And McCarthy's roots in California's Central Valley provide some clues about how McCarthy might run the House, if he's elected speaker.

According to locals, one of McCarthy's favorite lunch spots in Bakersfield is Luigi's, a more than 100-year-old Italian restaurant and grocery. On a recent weekday, people enjoying lunch at Luigi's said they knew McCarthy well, and most referred to him not as "the congressman," but as "Kevin." 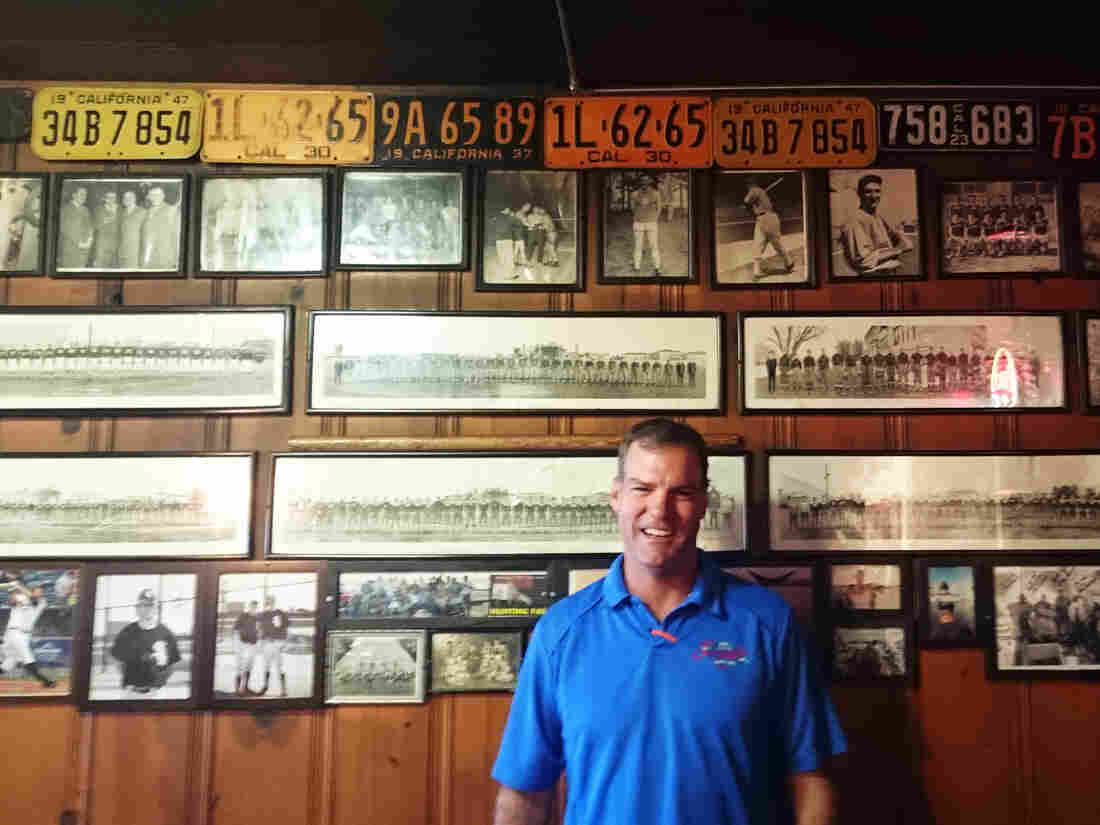 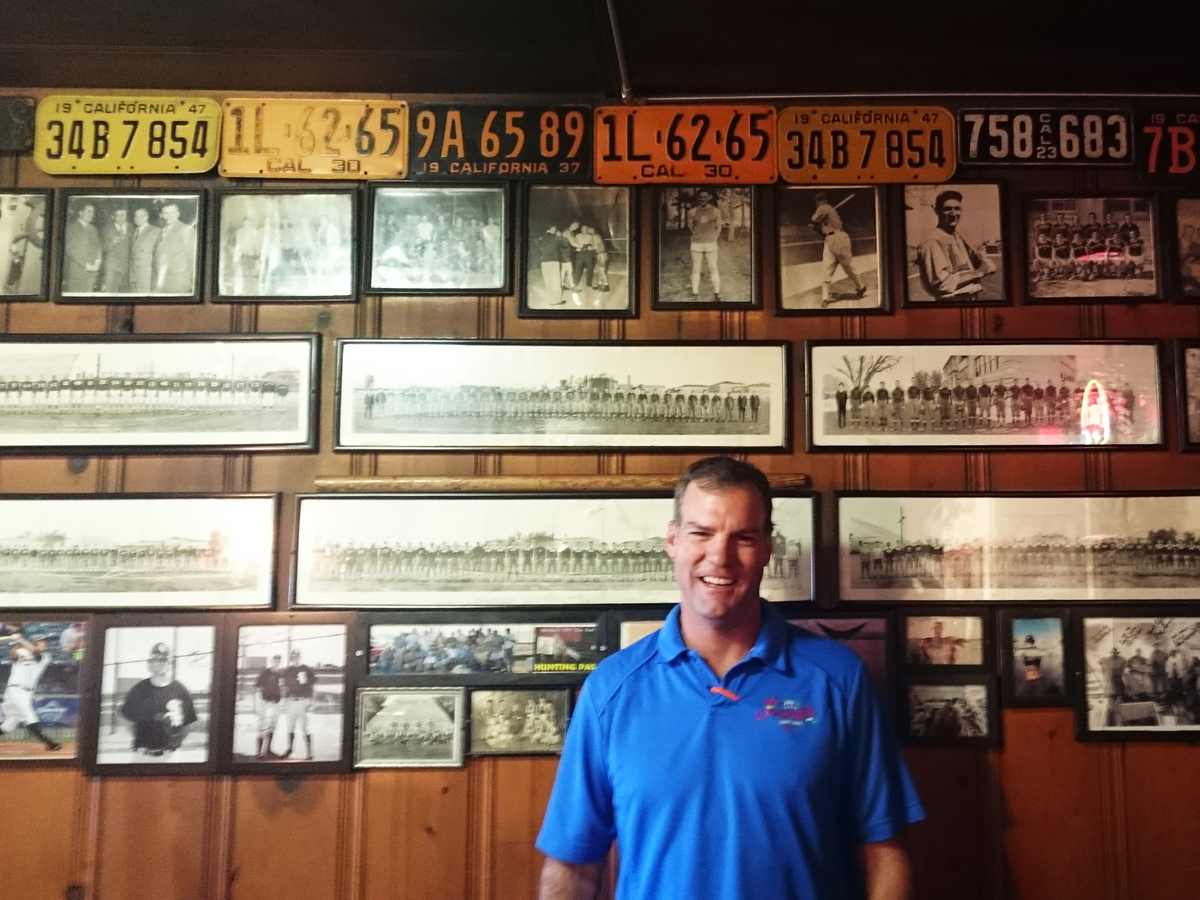 Gino Valpredo owns Luigi's, a popular Italian restaurant in Bakersfield frequented by Rep. McCarthy. Patrons say McCarthy is very popular in town, and nearly everyone calls him by his first name, Kevin.

"Kevin was just another parent in the stands that was rooting for our team," said Gary Toschi, who got to know McCarthy when he coached the now-majority leader's son in baseball. "He wasn't a hardcore fan — 'Everything's OK, as long as my kid bats fourth, plays shortstop!' — No he wasn't like that at all."

Like a lot of people in Bakersfield, Toschi works in agriculture.

Terry Smith works in the other main industry in Bakersfield — he's an oil and gas consultant. He says the working people here like Kevin McCarthy, who he says is no fluff.

"I call him 'Kevin' when I see him and shake his hand," says Smith. "He came from here. He's a Bakersfield boy. I mean, he's one of us. And I don't think he's changed now just because he's in Washington."

McCarthy is popular with many people in Bakersfield who know him, but not with everyone.

Proponents of immigration reform say McCarthy hasn't done enough to clear a pathway to citizenship for millions of immigrants in the U.S. illegally. 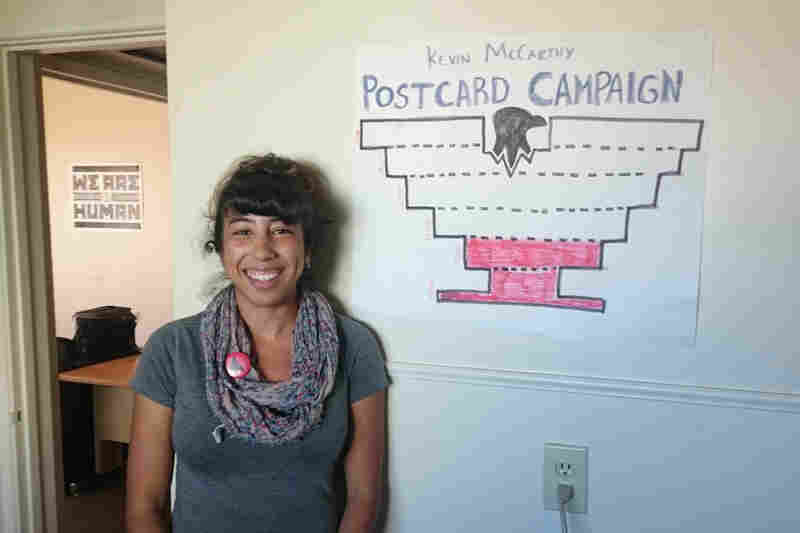 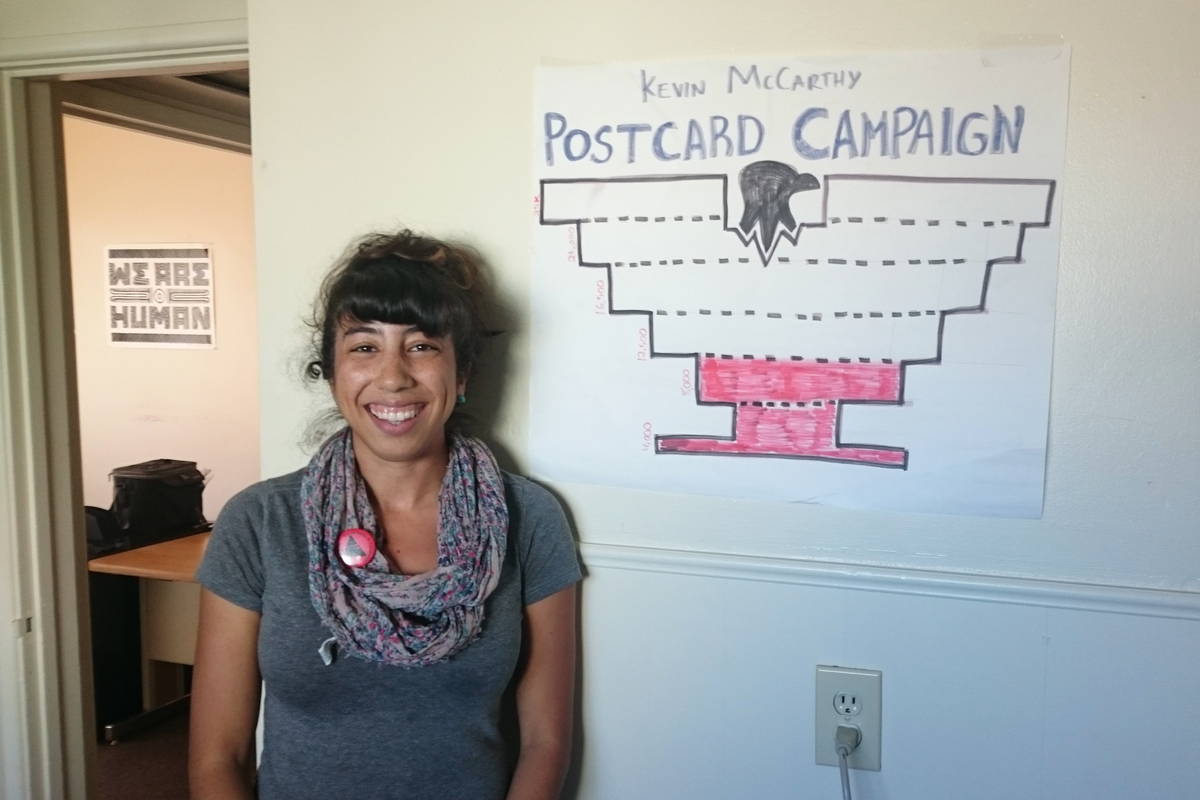 Marichel Mejia, an organizer with the United Farm Workers Foundation based in Bakersfield, has pushed McCarthy to support immigration reform. The large agriculture community and Latino population have influenced the district's immigration politics.

They point to comprehensive immigration reform that passed the Senate in 2013, but that Republican leaders like McCarthy and Boehner failed to bring up for a vote in the House.

Gonzalo Santos, a California State University, Bakersfield professor and immigration activist, has been a strong critic of McCarthy.

"We have had a continuous process of petitions, of marches, of rallies, of every conceivable effort to reach him," said Santos. "His district is one-third Latino, this county is over half Latino, and he doesn't respond. He doesn't engage. He does not commit."

And the United Farm Workers Foundation based in Bakersfield has pushed McCarthy to support immigration reform, including with a UFW postcard campaign.

In California, the politics of immigration reform are different than at the national level.

Nearly all the people who work the farms that power this district are immigrants, many of them in the country illegally. Many farm owners support some kind of immigration reform.

And even conservative Republicans here believe that deporting millions of immigrants is not an option.

"I'm considered one of the most conservative state assembly people in the state of California — they call me sometimes a 'Tea Party Darling,'" said California State Assemblywoman Shannon Grove, who is also a McCarthy supporter.

Grove said she does not back a pathway to citizenship for people in the country illegally, but does support a form of legal status.

"We need to protect our borders first," said Grove. "But I think that the people that are here illegally we need to deal with in a compassionate way."

In the past, Kevin McCarthy has said he favors legal status for immigrants that could protect them from being deported, but not a pathway to full citizenship.

The second group that McCarthy has to please is the Tea Party conservatives.

They are skeptical about whether McCarthy will make compromises if he becomes the House speaker, like current speaker John Boehner.

Or if McCarthy will hold the conservative line, like he did when he first got to Congress in 2007.

"I joke with him, I've started a new hashtag called #BringBackTheOldKevin," says Tom Pavich, a local Tea Party leader and organic grape grower. "[It's] not quite trending yet, but I'm working on it."

The person he calls "the old Kevin McCarthy" once had a perfect rating on his voting record from the American Conservative Union.

But since joining the House leadership in 2009, Pavich said McCarthy's had to compromise.

It's the question that looms over McCarthy. How would he please the most conservative members of the party?

Analysts say that was something John Boehner never figured out.

Richard Beene, president and CEO of local newspaper the Bakersfield Californian, said an important thing to remember is that McCarthy was once a staffer for Republican Bill Thomas, who used to represent Bakersfield in Congress and chaired the powerful House Ways and Means Committee.

"Bill Thomas was extremely, extremely bright," says Beene. "He was known as one of the brightest guys in the House, but maybe as also one of the meanest guys. And Kevin is neither of those things ... he always says, 'I may not be the smartest guy in the room. But I will be the hardest working guy in the room.'"

Beene says one thing McCarthy did learn from Thomas is how to build consensus. And that is not in line with the Tea Party tactic of blocking legislation on principle.

"His voting record would certainly pass any conservative's litmus test," says Beene. "But I think that his internal drive is to make things happen. He's not an obstructionist at heart."

McCarthy declined declined NPR's request for an interview. Republicans will nominate a candidate for House speaker on Thursday.