Accessibility links
After Oregon Shooting, GOP Candidates Urge Caution In Response : It's All Politics Most Republicans are calling for a renewed focus on mental health services, but some of the presidential candidates have been criticized for their word choice in responding. 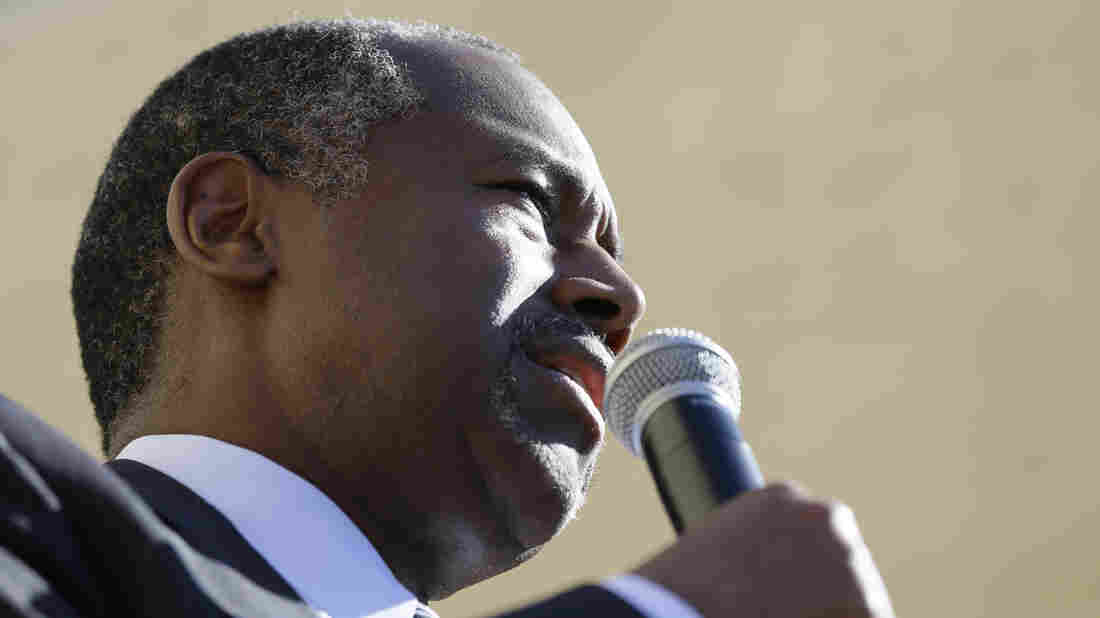 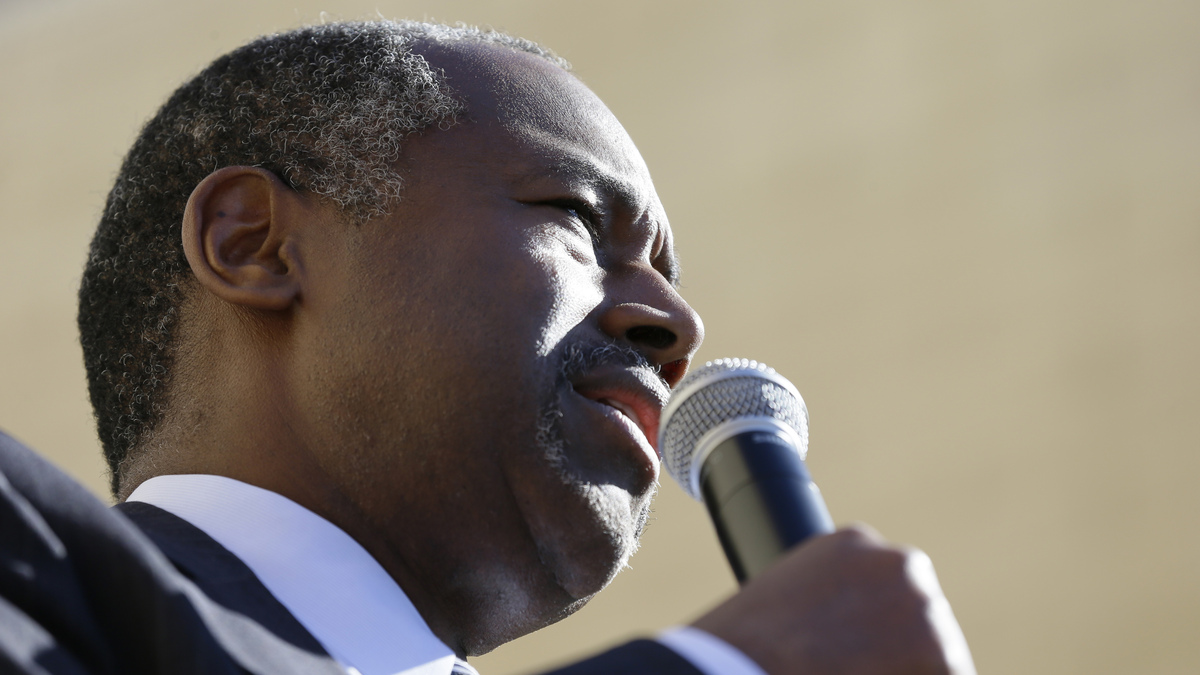 Instead, most are urging a renewed focus on mental health with a caution not to react too quickly before all the facts are known — but some of them have reacted inartfully at best.

Neurosurgeon Ben Carson, who's been surging in the polls, said Tuesday on Fox News that if he were in a situation with an active shooter, "I would not just stand there and let him shoot me."

Carson defended his comments Wednesday on CBS, saying that it appeared that the students "didn't rush the shooter," which could have changed the outcome.

"The shooter can only shoot one person at a time," Carson argued. "He cannot shoot a whole group of people. So the idea is overwhelm him so not everybody gets killed."

Current front-runner Donald Trump defended Carson against criticism for his comments. The billionaire businessman said on NBC's Meet The Press Sunday that if people were allowed to have guns in the classroom, the incident could have been stopped — a common refrain as well from the powerful National Rifle Association.

Jeb Bush also created a firestorm last Friday when he urged caution in reaction to the shootings by saying "stuff happens."

"I had this challenge as governor," Bush said of the way government should respond after such incidents. "Look, stuff happens, there's always a crisis. And the impulse is always to do something, and it's not necessarily the right thing to do."

While the former Florida governor wasn't being flippant about the tragedy that took the lives of nine people, his choice of words left him explaining what he meant — that lawmakers shouldn't react to this latest incident with more regulations, as President Obama had pleaded for in the immediate aftermath.

Wednesday at a campaign stop in Muscatine, Iowa, Bush underscored that he believes that the way to stop the epidemic of mass shootings is with a renewed focus on mental health treatment and not to curtail Second Amendment rights.

"I don't think you can say taking the rights away of 99.999% of law abiding citizens would have changed the outcome. These are people who are sick, they needed help, we didn't intervene early enough and they spiraled out of control and acted on their sickness in a way that was devastating," Bush told reporters after the event. "The impulse in Washington is to try to take advantage of these situations and create broad restrictions on gun rights without having a focus on whether it would have changed the course of that particular event."

Ohio Gov. John Kasich also said that guns themselves weren't to blame, but instead an increasingly isolated society where mental illness can flourish instead of being fixed.

"The problem is, I don't think, the lack of gun laws, I think the problem is we have a society where people become increasingly isolated. They become estranged, they have no family, they don't have much community," Kasich said Tuesday on CNN. "I've been involved and invested a lot to help the issue of mental illness in Ohio. It's one of the reasons I expanded Medicaid, so the communities are strong. It's those kind of things, because if you focus on the guns, you're missing the bigger picture, which is the fact that people have been isolated, estranged, and to try to take away guns, I don't think is going to solve the problem."

Florida Sen. Marco Rubio said on NBC Tuesday that mental illness should be the focus going forward, and that "we need to begin to address [it] more seriously, as opposed to stigmatizing it or, in some cases, trying to put it aside, and that's a societal thing that we need to confront."

Last week in South Carolina, businesswoman Carly Fiorina urged similar caution, and said that the current laws on the books should be better enforced. The Oregon shooter appears to have purchased his weapons legally, but others, such as the shooter who killed nine African-Americans in a Charleston church this summer, should not have been able to purchase firearms.

"Before we start calling for more laws, I think we should consider why we don't enforce the laws we have," Fiorina said. She added that Obama's call for more laws and restrictions in the wake of the shooting was "premature at best" and "at worst a really unfortunate politicization of this tragedy."

"Unfortunately that is the approach with President Obama on every issue, is that he seeks to tear us apart, he seeks to politicize it and it's worth remembering he is ideological and he's a radical," Cruz said Friday on the Mark Levin radio show. "We ought to do everything we can, for example, to be prosecuting the felons and fugitives who are trying to illegally buy guns. The Obama administration doesn't do that. Instead, they try to use these tragedies as an excuse to come after the constitutional rights of law-abiding citizens."

Louisiana Gov. Bobby Jindal took a different tack than most of his competitors, writing on his website that "these shootings are a symptom of deep and serious cultural decay in our society."

"If anyone is at all serious about changing any of this, they must address the root problems, and those are cultural decay, the glorification of evil, the devaluation of human life, the breakdown of the family, and specifically the complete abdication of fathers," Jindal continued. "Meanwhile, the shallow and simple minded liberals will continue to blame pieces of hardware for the problem, and they will long for the days before firearms were invented."

All of these positions are ones in line with the Republican Party, even though they could cause problems in a general election. Support for gun rights has seen a significant uptick in the past two decades among GOP voters, while Democrats have continued to push for stricter regulations.

On Monday, Democrat Hillary Clinton unveiled her new proposals in the wake of the Oregon tragedy, including closing the gun show loophole and allowing lawsuits against gun manufacturers.

Former Maryland Gov. Martin O'Malley's plan goes even further, including requiring everyone who buys a gun to be fingerprinted and get a license and creating a national firearms registry.

Vermont Sen. Bernie Sanders, who on most issues is the most progressive candidate in the Democratic field, has had a mixed record on gun control in the past. But he also said he would soon release a plan that would strengthen background checks and include mental health reforms.