Accessibility links
Koch Political Network Expanding 'Grass-Roots' Organizing : It's All Politics The groups funded by the Koch brothers have run lots of TV ads, but now they're making a big community-organizing push. They have the money to do it, too, vowing to spend almost $1 billion for 2016. 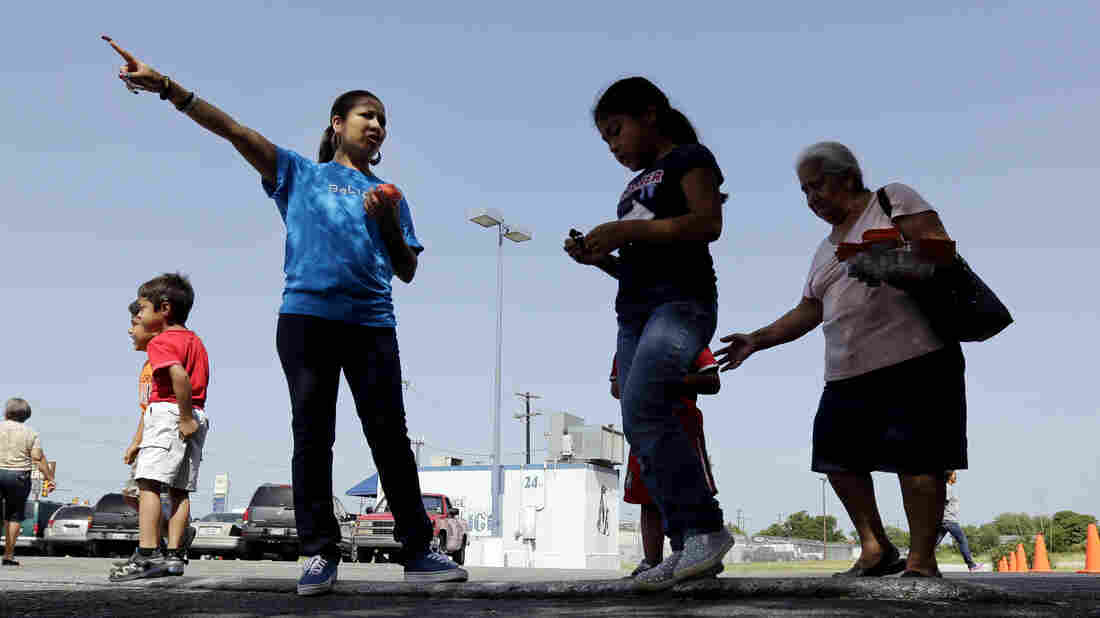 A volunteer with the Koch-funded Libre Initiative directs people in 2014 as groceries are distributed at a food bank it partially sponsors in San Antonio. Eric Gay/AP hide caption 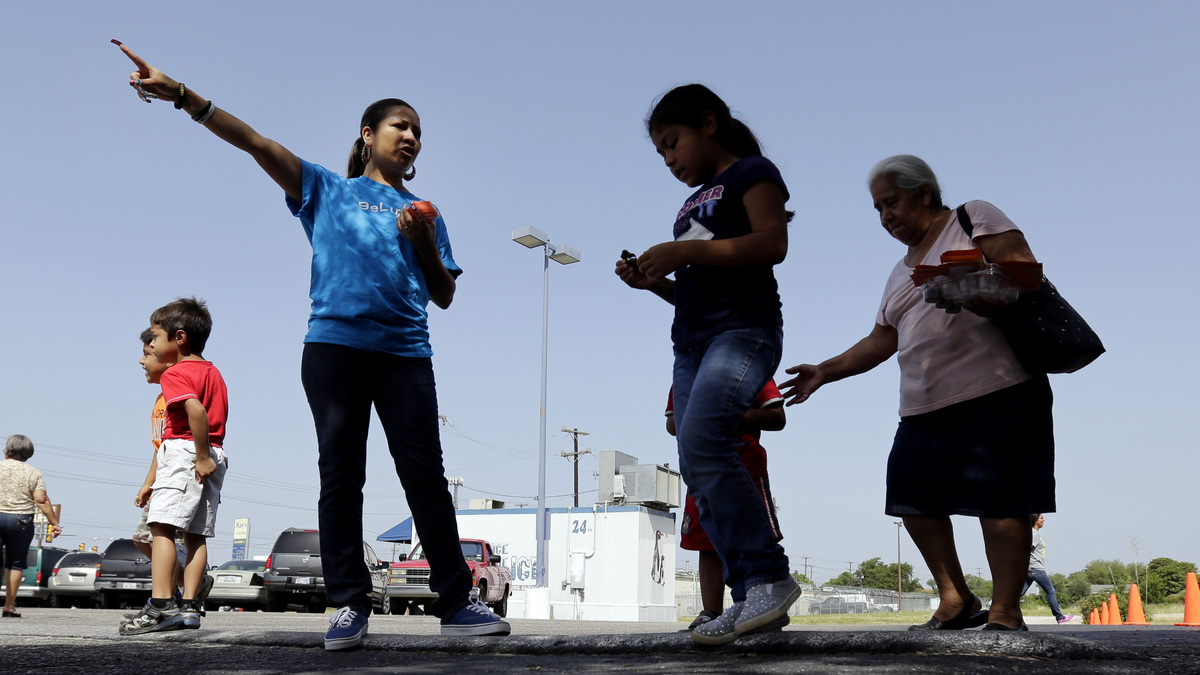 A volunteer with the Koch-funded Libre Initiative directs people in 2014 as groceries are distributed at a food bank it partially sponsors in San Antonio.

The political network led by billionaires David and Charles Koch is building what's meant to be a seamless system of grass-roots groups, designed to advance the network's conservative and libertarian goals year in and year out, while also helping like-minded politicians.

This strategy could have come straight out of a labor union's handbook, or an Obama campaign memo: community organizing.

"This isn't just about an election cycle," Pete Hegseth, CEO of Concerned Veterans for America, told a group of activists at an August conference. "What makes this network different ... is that we've been in these communities now for three, four years and we're going to be in them in 2017, 2018, 2019."

Concerned Veterans is one of the Koch grass-roots groups, and Hegseth was speaking at a session titled "Community Organizing — Life Past November."

It's a stark contrast to media campaigns that have absorbed millions of dollars from the Koch network. In 2012, the network spent nearly $400 million overall, including extensive TV attack ads. Other big-budget outside groups, including Crossroads GPS and American Action Network, have also favored TV. They are aiming to spend more than double that for the 2016 election.

Joining Hegseth at the community organizing session were representatives of the broad-based Americans for Prosperity; Generation Opportunity, targeting millennials; and the Libre Initiative, which is working to build ties in Latino communities.

Libre Executive Director Daniel Garza said his organization is putting down roots in neighborhoods where progressive groups have been active for years. "They're embedded," he said. "I mean, they run the institutions in the community. They've gained the trust of the Latino community."

The session was part of the 2015 Defending the American Dream Summit, sponsored by the Americans for Prosperity Foundation in Columbus, Ohio. NPR obtained audio of the session from a liberal activist who bought a ticket to the conference. The activist said the recorder was in plain view as the participants spoke.

"The strategy has not changed since Day 1," Garza told NPR in a phone interview of his group, which was founded in 2011 and which Garza says now has 15,000 supporters in nine states. "Control the message in media, both in Spanish and English language. Second, was working with the communities, at the community level. And third, was to mobilize an army of advocates and activists and volunteers who could drive our message at the community level."

At the community-organizing session, Garza went through some of Libre's activities. In Nevada, where immigrants in the country illegally can get driver's licenses, it helps Latinos prepare for the Department of Motor Vehicles.

In Florida, a new program covers the costs and helps people study for GED exams — which it also pays for.

As Libre volunteers work in a community, they tell people about low taxes, small government and libertarianism, Garza told the session.

"And, of course, they've now become part of our database," he said. "Over 100,000 people that we've touched one-on-one at these community events."

"What we're doing with the Latino outreach, well, nobody had done it before at the scale we're doing it," Garza told NPR. "So, there's no playbook."

At the community-organizing session, Hegseth said he put the basic message — less government and regulation, more unfettered free enterprise — and framed it in military terms.

"It's fighting for the freedom and prosperity here at home that we fought for overseas or in uniform," he said. "It's when you raise your right hand to defend the Constitution. There's no reason why when you come home that service should stop."

Concerned Veterans is currently promoting legislation to simplify the firing of employees at the Department of Veterans Affairs.

As Concerned Veterans volunteers talk about the legislation with veterans and military families, Hegseth said, "then they also pick up an iPad and knock on some doors and make some phone calls and remind veterans to vote."

The iPads may be new, but community organizing is old-fashioned American politics. In the 1800s and early 1900s political parties were often involved in local communities.

More recently, however, those connections have withered, Harvard professor Theda Skocpol told NPR, and "parties have mainly been about raising money and running election campaigns."

Skocpol is a sociologist and political scientist who leads the Scholars Strategy Network, a group of progressive academics. She's been studying the Koch network for several years and says it is emulating what political parties and labor unions used to do.

In fact, the Koch network perhaps can do it better. The network can persuade donors to keep giving in non-election years, while progressive efforts struggle to maintain a presence. In other words, progressive groups and unions cannot keep pace with the Koch network.

"No. Not even close," Skocpol said.

Besides cash-flow problems, the progressive infrastructure is fragmented, with hundreds of groups targeting their own specific issues.

"That's not what you see on the right," Skocpol said. "You see much more of an effort to create an overall strategy."

It's a strategy meant to last for many elections to come.

The Koch political network has branched out and put significant amounts of money into trying to win over various voter groups, including Hispanics, on the ground. In all, the groups have been funded with more than $570 million and almost 4,000 official volunteers.