Accessibility links
What To Watch For At Democrats' First Debate : It's All Politics Hillary Clinton needs to appear likable and trustworthy, while Bernie Sanders needs to appear presidential. Others need to make the case for why voters should give them a look.

What To Watch For At Democrats' First Debate

What To Watch For At Democrats' First Debate

A bruised Hillary Clinton will have much to prove as she takes the debate stage Tuesday evening alongside four of her Democratic presidential challengers. The former secretary of state has been damaged by lingering questions about her private email server and doubts about her trustworthiness.

That has partly enabled Vermont independent Sen. Bernie Sanders to ride a wave of progressive support to a lead over her in New Hampshire and an impressive $25 million fundraising haul last quarter.

Sanders, too, will need to impress in his most high-profile appearance so far. This will be the first chance for many voters to see him on stage, and they'll be watching to see if he's someone they want to be president.

"It's certainly not going to be as entertaining as some of the previous Republican debates, but it will be important, especially for Hillary Clinton and Bernie Sanders, to finally show the broader public what exactly they're made of," said Jim Manley, a longtime Democratic strategist and former top Senate aide.

Of course, there's also the elephant — or, rather, the donkey — in the room: Vice President Joe Biden. He's not yet announced his intentions, as he continues a public flirtation with a bid. CNN has left open the possibility of allowing Biden on stage, even if he were to decide as late as Tuesday. He has given no indication that he will do so.

But perhaps the most important thing for Democrats is that it's finally their turn in the political spotlight. After two rollicking GOP debates and a cycle that's largely been dominated by the outsiders in the Republican field, party loyalists have worried they are being overshadowed.

"This is the first real opportunity for a Democratic message to break through," said Mo Elleithee, a former Democratic National Committee communications director who now directs the Georgetown Institute of Politics and Public Service. "The numbers game is working against us right now, and the Republican message is penetrating far more than the Democratic message."

Here's what to watch for from each candidate in the first Democratic debate. CNN's coverage begins at 8:30 p.m. ET, while the debate is expected to start at 9 p.m. ET Tuesday on CNN. 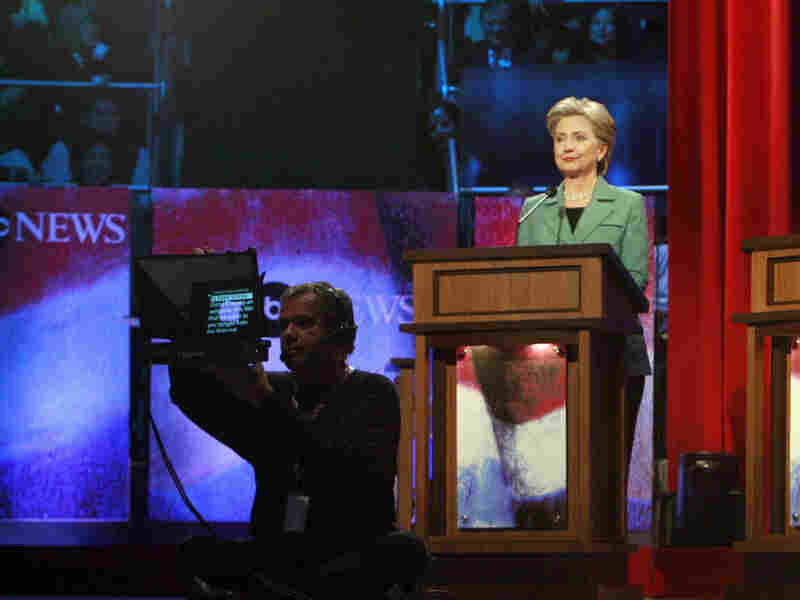 Hillary Clinton participated in 25 primary debates during her 2008 campaign — experience that should serve her well on Tuesday night. But she still has to appear likable and at ease on stage this time. Matt Rourke/AP hide caption 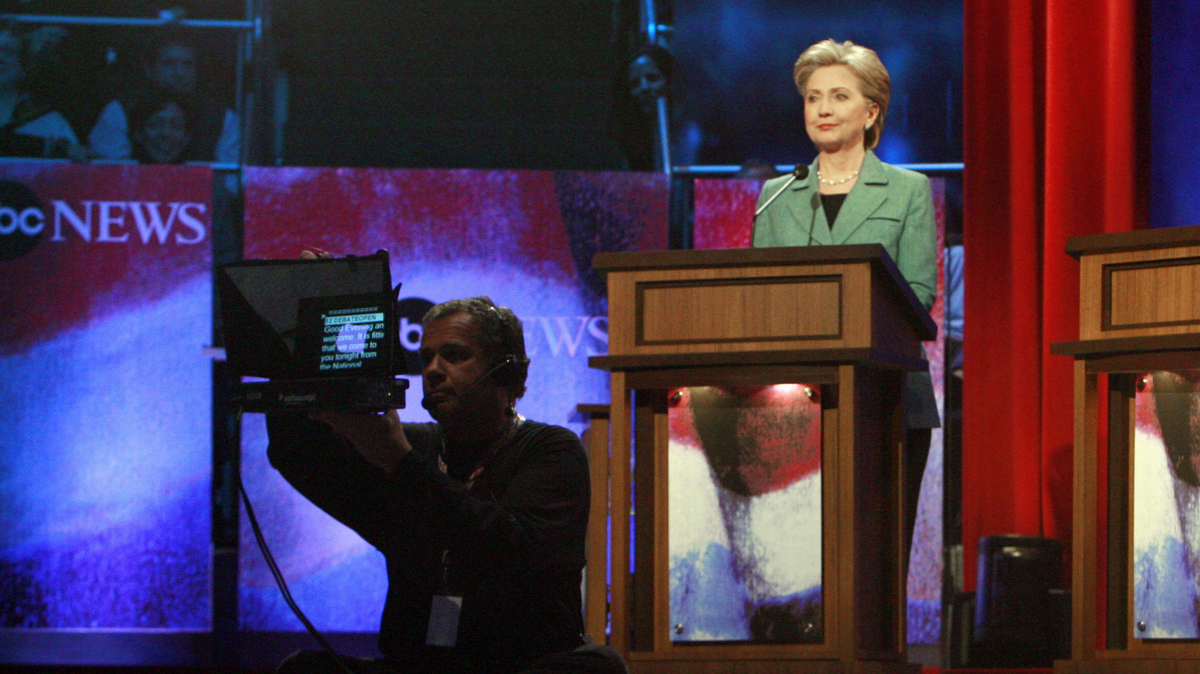 Hillary Clinton participated in 25 primary debates during her 2008 campaign — experience that should serve her well on Tuesday night. But she still has to appear likable and at ease on stage this time.

Need: Appear likable and straightforward, especially when talking about those emails and recent policy positions

She will be center stage and the center of attention. She's the most experienced campaign debater on stage — there were 25 primary debates in 2008 — and that will be an asset. But Clinton still has some of the same struggles she had eight years ago — trying to appear likable and not scripted to a public very skeptical of traditional politicians.

"In Hillary's case, she has to be more likable and come across as genuine and down to earth," said Dan Payne, a Democratic strategist and debate coach. "She is those things, from what people say who know her well. She can talk to day-to-day people about their lives and share experiences, but somehow it doesn't come across when she's on camera. She gets stiff and stern, and not likable."

She wasn't that way during her cameo on Saturday Night Live last week, Payne noted, and that should be an instance her team should draw from.

"She was self-aware," he added. "She was poking fun at herself and doing it with a laugh. If she can do that in the debate occasionally, it can help."

One of the first questions directed to her will likely be about her email server. She has yet to put to rest questions about why she had the private server and whether it was a security threat. Last month she finally apologized for the decision, but it may have been too little too late.

In an interview on 60 Minutes on Sunday, President Obama said the server was not a national-security threat. But he did not forcefully defend Clinton, instead directing questions back to her.

"I would hope that, if pressed, she would again apologize for allowing this to be an issue in the first place," said Manley, who is a Clinton supporter.

It's no mistake that in the run-up to the debate, Clinton came out against both the Keystone XL Pipeline and Obama's Trans-Pacific Partnership, something she once called the "gold standard" of trade agreements. Clinton was trying to clean up messy policy positions ahead of the debate.

But Clinton will still likely have to answer whether the moves were politically calculated. Sanders and former Maryland Gov. Martin O'Malley have been against both for some time; expect them to point out the disparity. 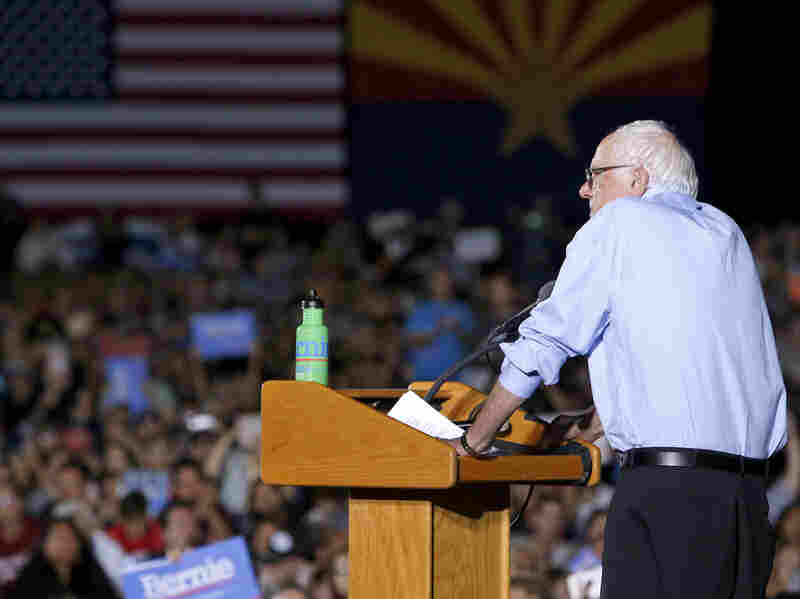 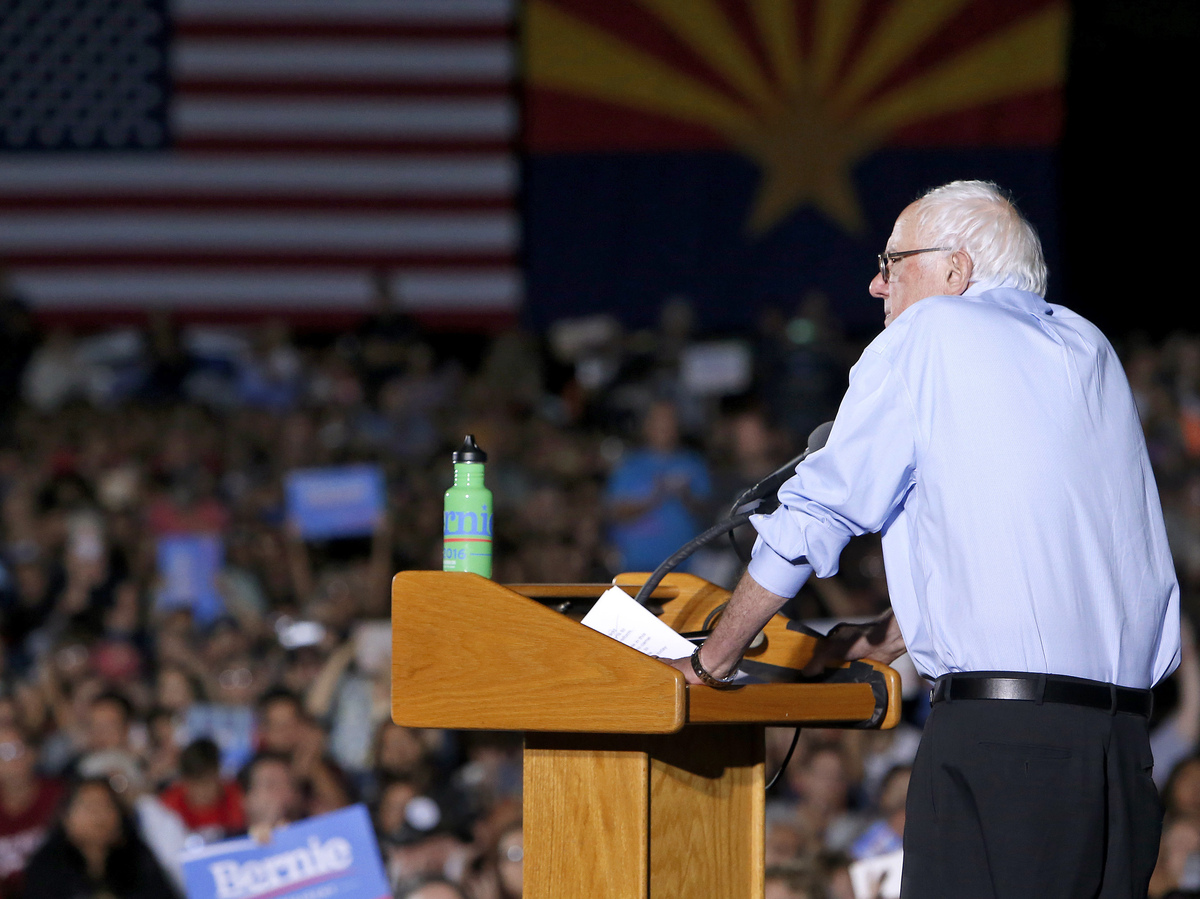 Vermont independent Sen. Bernie Sanders has been able to wow massive crowds, but debating will take a different skill set.

Need: Convince a national audience he's presidential material and that he can branch out beyond his core economic message

While Sanders may not have had much campaign debating experience — he has faced mostly safe elections in Vermont — he does have more than two decades of congressional experience to draw from. He brings skills debating on the House and Senate floor and in committees to Tuesday's event.

His challenge will be translating the considerable enthusiasm he's been generating on the campaign trail to the debate stage. Filling arenas is quite impressive, but facing questions from moderators and elbows from his rivals is another thing entirely.

"He can give a line or two or three and get a roar from the crowd," Payne said, "but you have much longer in a TV debate — you have to sustain your argument for 45 seconds to a minute."

Don't expect Sanders to go for the jugular against his chief rival, though. As much as the moderators might try to goad him into it, the Vermont senator has largely avoided direct attacks on Clinton, and his team has telegraphed to expect the same on Tuesday. Instead of focusing on lobbing hits, Politico reported, his somewhat limited debate prep has instead been policy-heavy.

"I suspect that neither one is really going to go after the other," predicted Elleithee, who worked on Clinton's 2008 campaign. "They may disagree, and they will point out where they disagree. That's normal, and that's fine. But I don't think you'll see either one come in and try to tear the other one down. That would be a bad strategy."

But Sanders will have to keep his cool throughout the debate, too. He's been testy with reporters when pressed in the past, and that type of reaction might not play well in front of a national TV audience.

"In Bernie's case, he has to be in control and not appear unpleasant — be a man who you could conceivably believe is president," said Payne, the debate coach. "If you're angry, it may come across as extremely harsh." 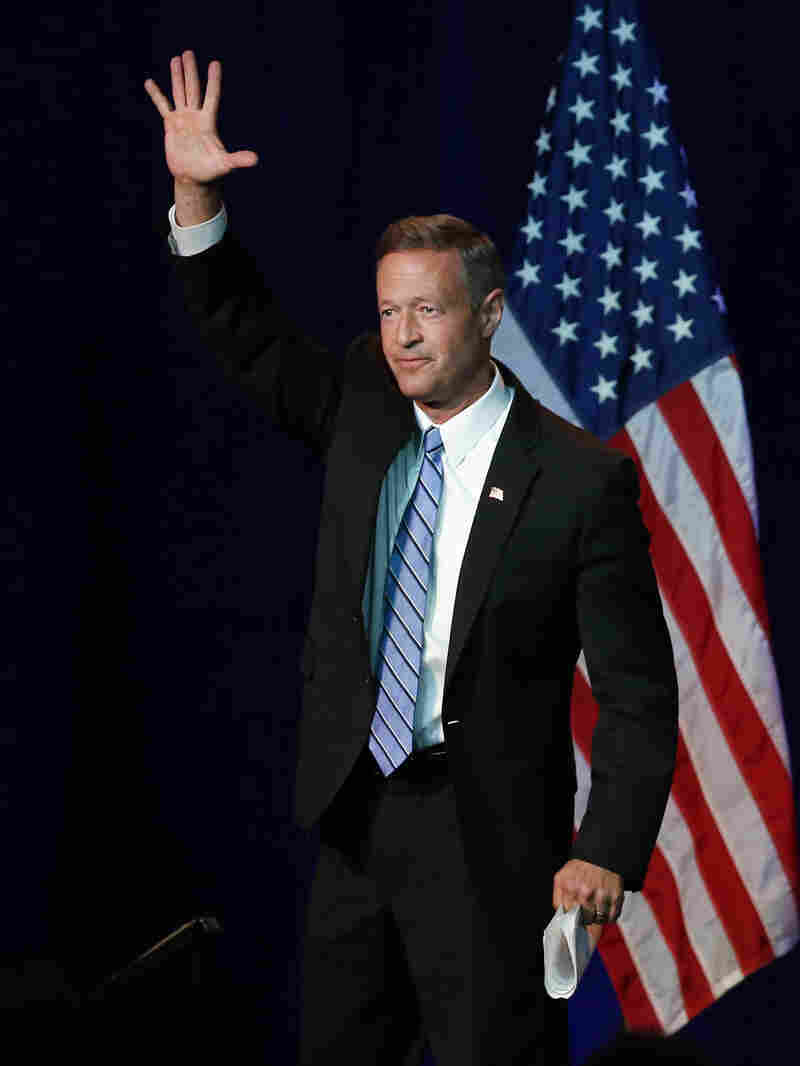 Former Maryland Gov. Martin O'Malley can draw distinctions between himself and his top two rivals on guns. But he'll need a breakout performance to stay in the game. Jim Mone/AP hide caption 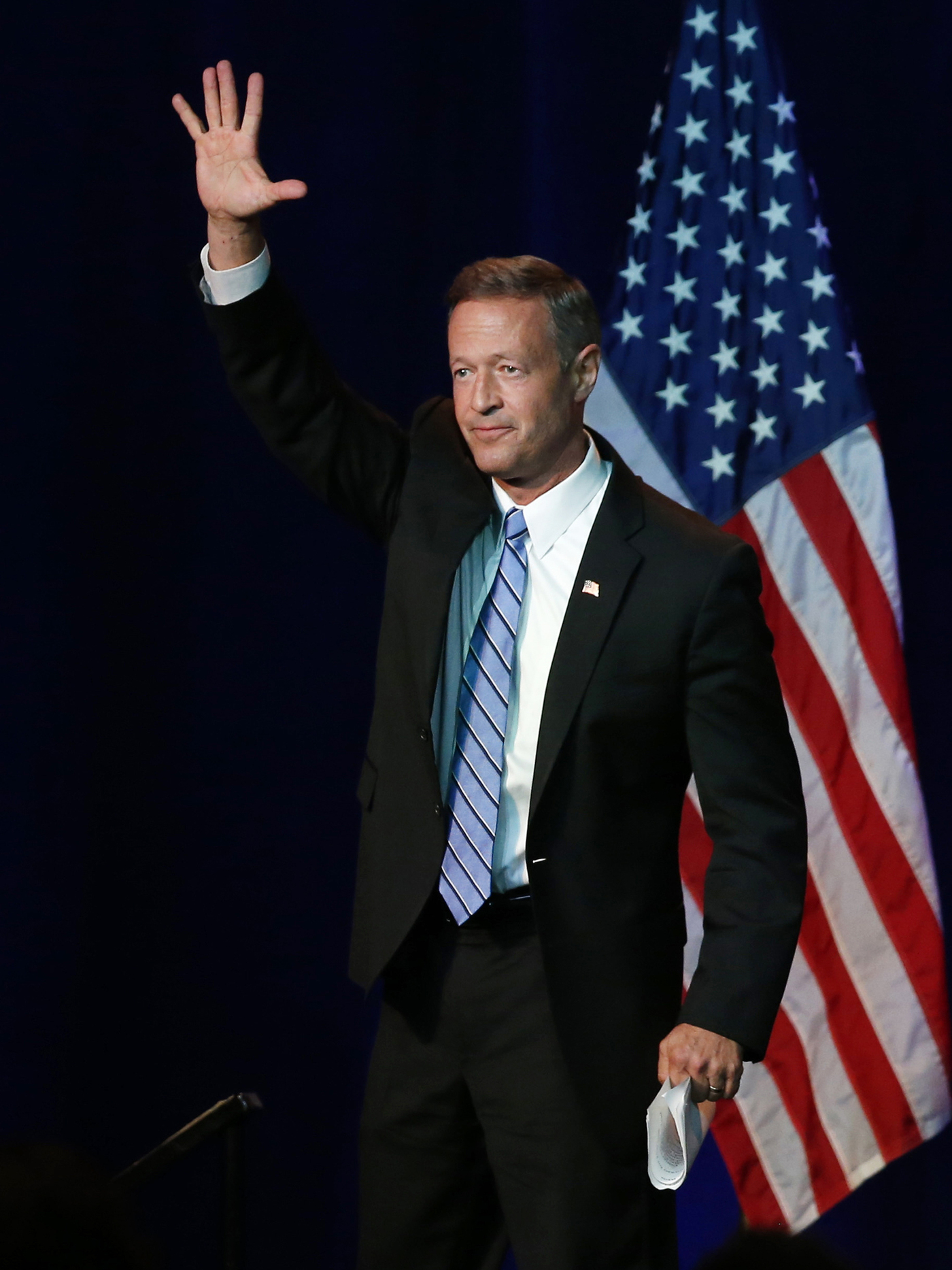 Former Maryland Gov. Martin O'Malley can draw distinctions between himself and his top two rivals on guns. But he'll need a breakout performance to stay in the game.

Need: Show he belongs in consideration as a top-tier candidate

Avoid: Debating about debates and getting on a high horse

Former Maryland Gov. Martin O'Malley has struggled to catch fire, but has also proven to be the most dogged Clinton attacker of the bunch — another element Clinton will have to manage.

Ultimately, O'Malley may have the most to gain and the most to lose during Tuesday's debate. Once seen as a rising star in the Democratic Party, he was supposed to have been the top alternative to Clinton. Instead, that distinction has gone to Sanders (or possibly even Biden, if he does indeed run).

Now, O'Malley needs to give a rationale for his candidacy and prove he can be an able sparring partner with both Clinton and Sanders. O'Malley has vigorously pushed for more debates instead of the scheduled six face-offs, and he needs to show why that's a good idea for him.

"This could be his Scott Walker moment," Elleithee said, comparing O'Malley to the Wisconsin governor whose presidential campaign was doomed after a dismal performance in the second GOP debate.

"O'Malley can either break through and show he deserves to be considered as a top-tier candidate," he continued, "or if he doesn't break through, his advisers are going to have to circle up, re-calibrate, and figure out what they're going to say to donors. The rationale for his candidacy is not very evident."

That doesn't mean O'Malley should come in being a bomb-thrower, which could backfire on stage. Instead, he needs to draw well-reasoned contrasts with his opponents.

One top issue where he could do that is on gun control, which is back in the news after yet another mass shooting last week. O'Malley has, by far, the most progressive and far-reaching plan of any Democratic candidate. He also stands in contrast especially with Sanders, who has had a mixed record on the issue.

Need: A breakout moment to show they're serious candidates

Avoid: Getting left out of the conversation

The other two candidates on stage — former Virginia Sen. Jim Webb and former Rhode Island Gov. Lincoln Chafee — have been almost entirely absent from the campaign trail and will simply need to explain why they're in the race. Both need to introduce themselves to voters, as expectations are already very low.

Webb, the only veteran on the stage, could bring a valuable voice in terms of foreign policy and national security.

"He needs to tell his story," Payne said. "He was a star in the making eight years ago, but once he left the Senate, his star has all but extinguished."

Chafee, a former GOP senator turned independent turned Democrat, could still have to explain his liberal bona fides and defend a controversial tenure as Rhode Island governor. Expect him to needle Clinton on her vote for the Iraq War — and to point out that even as a Republican, he opposed it from the start.

Both Webb and Chafee need a breakthrough moment.