Accessibility links
Joe Biden's Window May Have Just Closed : It's All Politics After strong debate performances by Clinton and Sanders, it's harder to see where the vice president would fit into the field. And that may be a welcome relief for a still-grieving Biden. 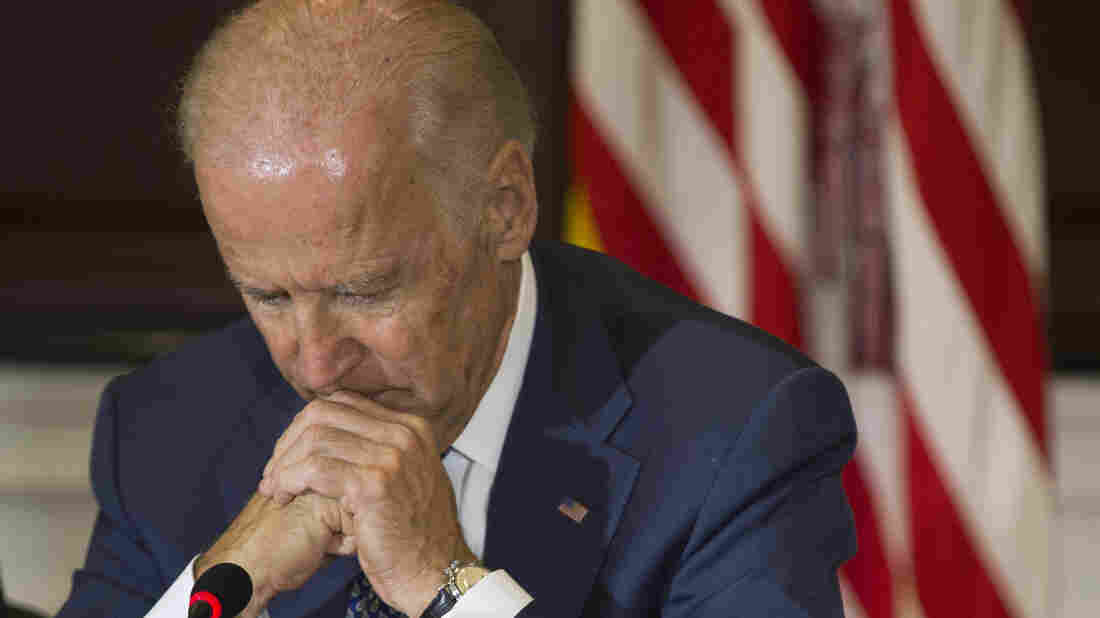 Despite promising a decision on whether he would run for president by the end of summer, Vice President Biden still hasn't announced one way or the other. Evan Vucci/AP hide caption 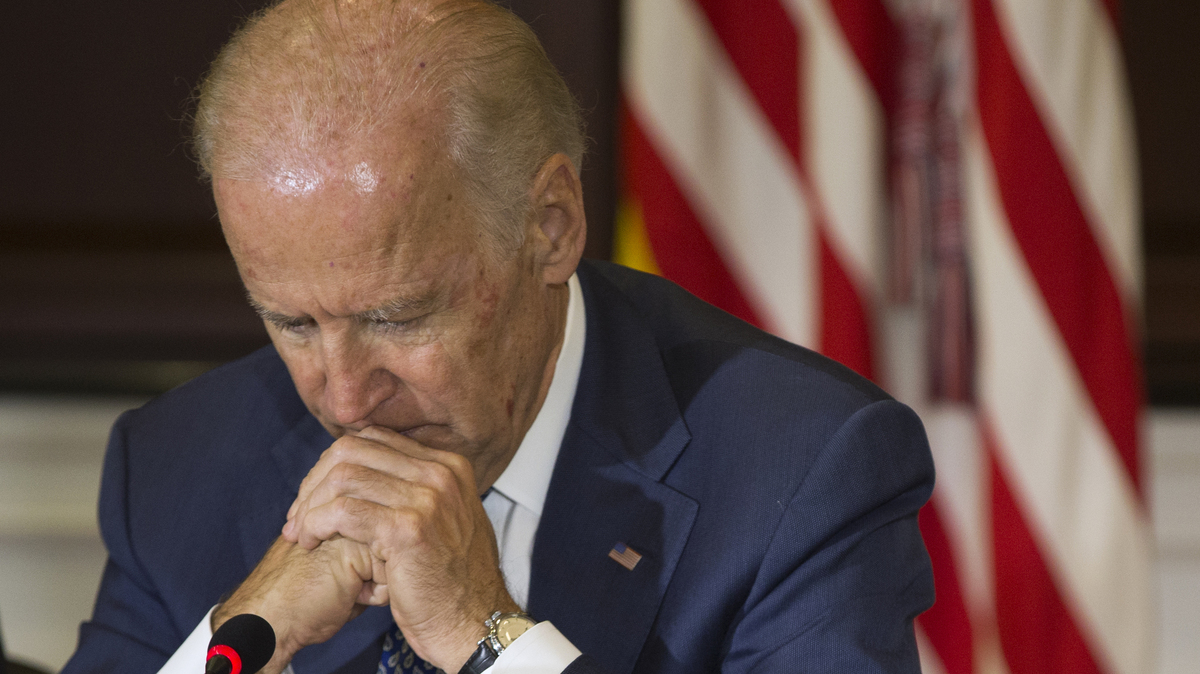 Despite promising a decision on whether he would run for president by the end of summer, Vice President Biden still hasn't announced one way or the other.

Biding his time may have cost Joe Biden after Tuesday's Democratic primary debate — but it could also be a welcome relief for the would-be candidate who never really seemed like he wanted to be a candidate.

As the vice president continues a Hamlet-like exploration of a White House bid, his self-imposed deadlines have come and gone, and yet he appears no closer to making a final decision.

But despite CNN's public entreaties for Biden to enter their debate — leaving the option for him to join until the last possible moment — the vice president wasn't missed at all on Tuesday.

In fact, for all the "will he or won't he" pre-debate hand-wringing, Biden's name wasn't even mentioned by any of his potential rivals. And the stage felt fully complete without Biden there, too.

For Democrats worried about Hillary Clinton's uneven performance on the campaign trail, a strong debate showing Tuesday night should do much to assuage those concerns. She was well-prepared, pointed with her responses to her scandals and needled her rivals when necessary. And when she could, she pivoted away from Democratic divides to draw distinctions with Republicans.

Perhaps most harmful for Biden, she pointed to ways she would continue Obama's legacy and emphasized how he trusted her experience on foreign policy even after their bitter 2008 fight. If Biden was going to run clinging to the president, Clinton just hugged him a little tighter on Tuesday, leaving less and less room for the vice president.

Her campaign issued a warning shot after the debate, too, with campaign chairman John Podesta telegraphing that it was time for Biden to either jump in or move on.

"If Vice President Biden wants to enter and compete for the presidency, then it is time he make that decision," Podesta said on MSNBC's Andrea Mitchell Reports. "And, you know, I think that we will have a healthy and respectful debate amongst friends about the direction of the economy, the direction of foreign policy. But she is very proud to have served President Obama."

But it wasn't just Clinton who did well on Tuesday. Bernie Sanders, too, got strong marks during the debate. Though he seemed ill-prepared on foreign policy, he shone on topics that are his bread and butter — economic inequality and money in politics. He wasn't aggressive, as some Democrats feared he might be, but instead gave Clinton some cover on her email server controversy, delivering the most memorable line of the night that "the American people are sick and tired of hearing about your damn emails!"

Overall, if Democratic leaders were worried about Sanders looking nonpresidential or unelectable, he didn't.

It was hard to imagine how Biden would have added to the debate stage or differentiated himself from either of the front-runners. Sure, Biden is affable and would have done well, but there was already little daylight between the Democratic candidates on most issues, and the vice president wouldn't have offered much contrast.

Even Biden himself seemed to agree with the positive assessment of the Democratic field after Tuesday's performance, saying Wednesday afternoon that "I thought every one of those folks did well."

Though the drumbeat from pro-Biden groups has only grown in recent weeks — the Draft Biden group aired an emotional ad in favor of his candidacy during the debate — Biden still hasn't given any public indication he will pull the trigger soon. He spent the weekend with his family at home in Delaware, not at diners in New Hampshire or at meetings in Iowa.

In fact, in his most recent interviews about whether he's planning to mount a third White House bid, Biden almost sounded like someone who wanted an out — any out. Talking to Stephen Colbert last month, the vice president sounded far from having the fire in the belly necessary to sustain a draining and bruising national campaign.

"I don't think any man or woman should run for president unless, No. 1, they know exactly why they would want to be president and, No. 2, they can look at folks out there and say, 'I promise you, you have my whole heart, my whole soul, my energy, and my passion to do this,' " Biden told Colbert. "I'd be lying if I said that I knew I was there."

Biden still doesn't have an answer for No. 1 — why he wants to be president and how he would be different than credible options who have already been running hard for months.

As for No. 2, as his raw interviews have exposed, Biden is still very much grieving after the death of his son, Beau, from brain cancer in May. And while reports have been out there — possibly floated by the vice president himself according to one report — that it was Beau who pushed him to run, the reality of a campaign and the idea of one are very different.

A strong debate performance by both Clinton and Sanders may have given Biden new pause about running. But it also could be a comfort for a man who is, more than anything, proud to be a father and grandfather and still isn't sure he can put his family through such an ordeal.