Accessibility links
'Dumbass' Or Not, Rand Paul's Live Stream May Be The Future Of Campaigning : It's All Politics Rand Paul might have tired with a daylong Internet broadcast from the trail, but his campaign says it was a success. 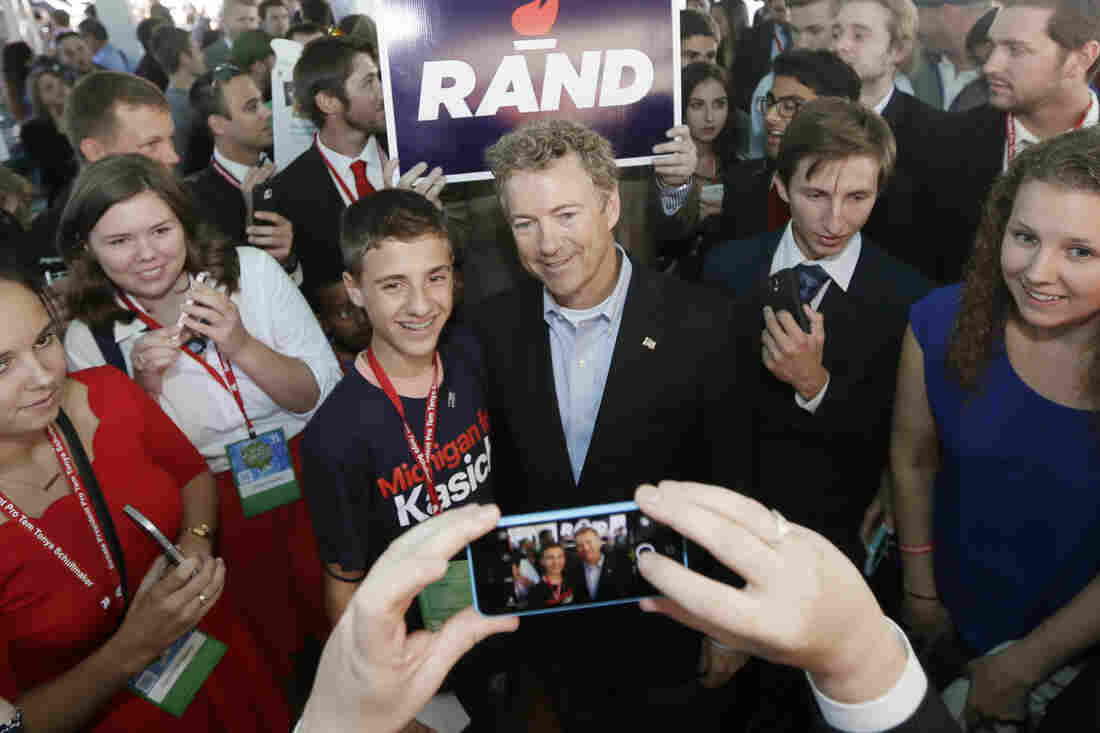 Presidential candidates have to put up with the ubiquity of mobile devices, as Rand Paul did posing for photos at a campaign event in Michigan last month. But for Paul, a full day of live streaming his campaign was too much. Carlos Osorio/AP hide caption 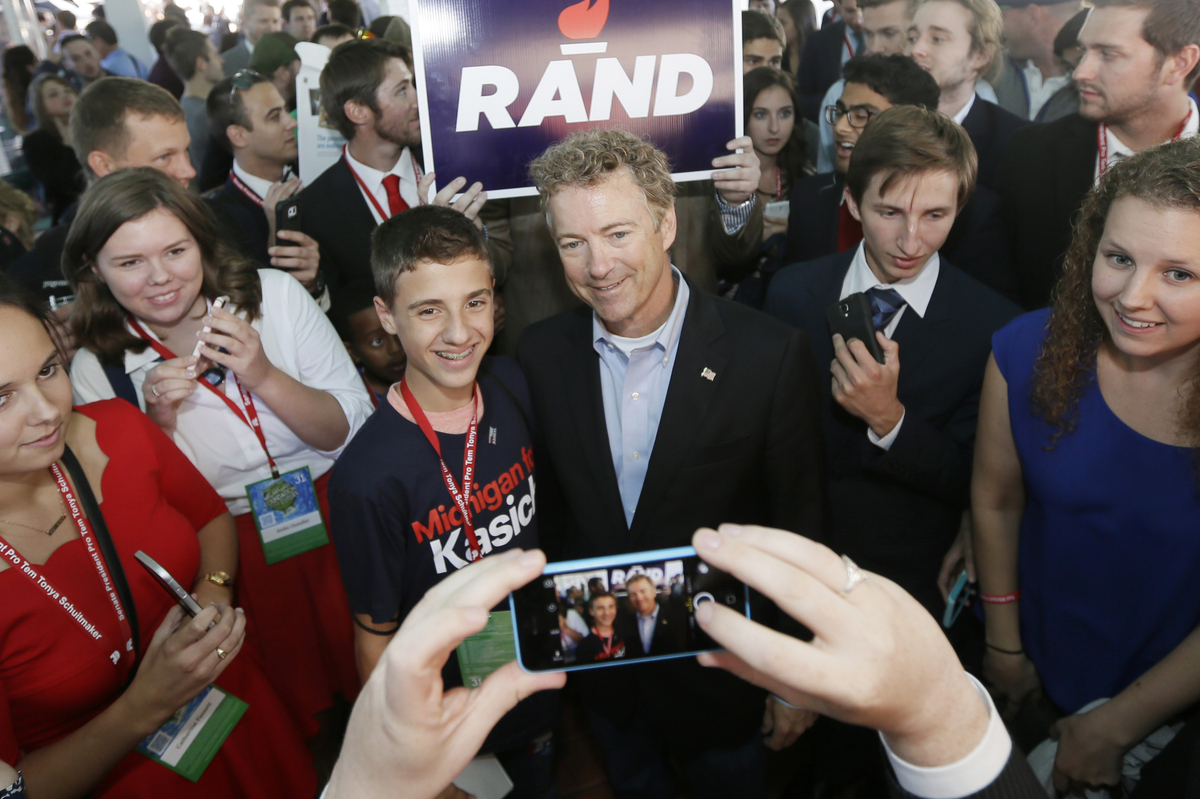 Presidential candidates have to put up with the ubiquity of mobile devices, as Rand Paul did posing for photos at a campaign event in Michigan last month. But for Paul, a full day of live streaming his campaign was too much.

It was probably only a matter of time before we got the live-streamed campaign.

With Periscope, Vine and Snapchat, candidates have seized on new apps this cycle to produce behind-the-scenes, unfiltered moments and deliver them to voters.

On Tuesday, Kentucky Sen. Rand Paul took the trend to its inevitable conclusion and broadcast the bulk of his day on the Iowa campaign trail on the Internet.

Toward the end of the day, Paul answered hostile questions from Twitter users that campaign staffers put in front of him as a gag. He delivered the type of language you don't usually hear from a presidential candidate. "Is Rand Paul still running for president? I dunno," he answered. "I wouldn't be doing this dumbass live streaming if I weren't."

But as far as digital revolutions go, "Randlive" offered all the excitement of a long car trip.

Viewers who tuned in saw Paul in the back of an SUV, checking his email, talking to reporters on the phone and playing DJ.

"Didn't we play this at CPAC one year?" he asked as Metallica's "Enter Sandman" blared. "Remember when MTV had music on?"

There were speeches and events, too. But a large chunk of what the Paul campaign broadcast via UStream was just the nuts and bolts of life on the campaign trail: tired small talk over coffee and orange juice in a generic hotel lobby; walking into an empty conference room; a visit to the windy baseball diamond where Field of Dreams was filmed.

"Was it all just the White Sox playing during the movie, or .... was Honus Wagner in the game?" he asked, after sitting in the bleachers where Kevin Costner watched Shoeless Joe Jackson and his teammates play ball. (Note to Paul: Wagner doesn't play, but the Sox do invite some players from other teams toward the end.)

Paul spokesman Sergio Gor said the campaign viewed the live stream as an extension of what they're already doing: aggressively embracing new platforms like Vine, Periscope and Snapchat, which all come with the promise of behind-the-scenes access. "This was a way for us to take people along for the ride with us. To see what a typical day on the campaign trail entails," Gor said

Digital strategist Vincent Harris conceded that part of the goal was to generate some attention, too. But, he said via email, "Modern voters, especially younger voters, expect to engage directly with politicians in an almost voyeuristic way. This stream certainly satisfied that approach."

Documentary filmmaker AJ Schnack knows something about campaign life. He made a movie, Caucus, about the 2012 Iowa campaign. He's a little hesitant about the current "you are there" trend in both politics and technology.

As raw as Periscope feeds and Vine clips claim to be, Schnack pointed out there's still a lot of production going on. "It's the appearance of giving more access, but the reality is they [the campaigns] also control the on and off switch. And it's still being seen through the filter of what the campaign wants you to see," he said.

But Schnack acknowledged Paul's stream was a bit different. Even though there were some gaps in the Paul live stream, the whole thing did come across pretty unfiltered. "I mean, I was seeing how exhausted Rand Paul looked," said Schnack.

The campaign said his reference to "dumbass" live streaming was a joke — that you have to think about Paul's sarcastic sense of humor — but Schnack said "Randlive" showed the risk that campaigns take when they really do go for the true unfiltered approach. "You know, I think there's a fine line between looking like you're really tired and looking like you're not interested in campaigning at all," he said.

Still, the Paul campaign is claiming victory. "It was a success for us in terms of generating traffic," emailed Harris. "The most to his site since the Fox News debate...so far the content has had more than 400,000 views and [is] growing by the minute."

As crotchety as Paul was about the live stream, the campaign says they may do it again.

And, in the true spirit of the web, the campaign has already turned Paul's "dumbass" comment into a T-shirt you can buy on Rand Paul's website.