Accessibility links
Meet The N.H. Mayor Presidential Candidates Want To Knock On Doors With : It's All Politics Local candidates in the first in the nation primary state often get high profile company when they stump for votes. 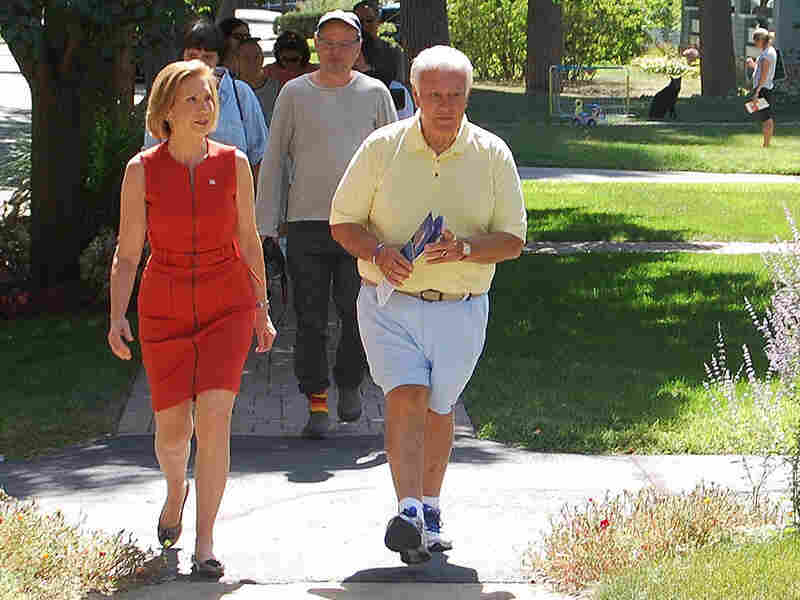 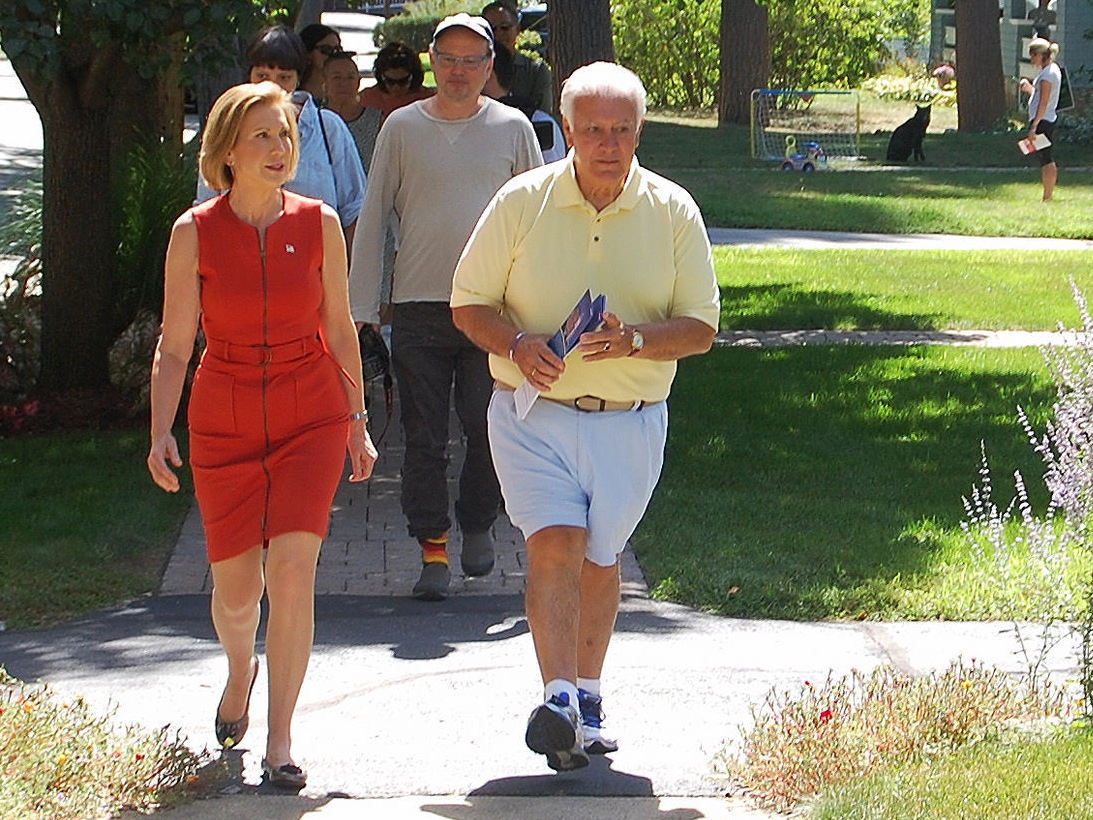 Many candidates on the road to the White House have made an unlikely detour: walking door-to-door through the streets of Manchester, New Hampshire, with the city's mayor, Ted Gatsas.

In a neighborhood of large, well-tended houses, Gatsas knocks on the doors of potential voters as he campaigns for a fourth two-year term. His companion this Saturday afternoon: Republican presidential hopeful and former Hewlett-Packard CEO Carly Fiorina.

"We do a lot of walking in this city — it's retail politics at its finest," Gatsas says.

It's not glamorous work; at most of the houses, no one answers the door. But when they find a real live human, Gatsas is quick to pounce.

"I have Carly Fiorina with me," he tells the prospective voter.

Fiorina chimes in, "I'm running for president, you really want to meet me."

This being New Hampshire, home to the first in the nation presidential primary, Fiorina is not the first White House wannabe to have walked the wards with Gatsas.

Other presidential hopefuls who have gone door knocking with him recently include Ohio Gov. John Kasich, New Jersey Gov. Chris Christie and Louisiana Gov. Bobby Jindal. And in past years, Gastas has been accompanied around town by the likes of John McCain and Mitt Romney.

"We like to say in New Hampshire that candidates for office will never walk alone," says Patrick Griffin, a longtime New Hampshire Republican strategist.

While presidential campaigns have become more national in focus, Griffin argues that candidates like Fiorina still need to appear they're in touch with local politics in early voting states.

"The optics of grassroots says something to potential voters in the early primary and caucus states [that] this guy or this woman is really doing the hard work needed to earn voters' trust and confidence one on one," Griffin says. "It also provides a wonderful set for the national media to shoot against, showing the candidate in action."

On the backstreets of Manchester, it's a local issue that's on one voter's mind: her daughters haven't gotten their high school diplomas, which in Manchester are signed by the mayor. Gatsas vows to to take care of the issue.

Then, the woman's attention turns to Fiorina and asks the former CEO what's she running for.

"You've got to help this guy!" said the voter.

It's a long, bipartisan tradition for national figures to cozy up to local New Hampshire politicians.

Former Manchester mayor Bob Baines, a Democrat, recalled winning his first election ahead of the 2000 presidential primary. Hours later, the phone rang and it was then-Vice President Al Gore on the line.

"The sitting vice president, all of a sudden, oh, by the way, I'm in town, I'm coming to Bob Baines' victory party," said Baines.

But it can be risky for local candidates to pick sides in a presidential primary.

"We are in the middle of a family feud, and until the family works this out, I'm not sure the benefit to [hosting] the national candidate is necessarily much more than the optic of them on the hustings. That's pretty much it," said Griffin.

At the end of their walk, Fiorina and Gatsas hug and exchange goodbyes — a presidential candidate and a mayor each looking to connect with New Hampshire voters, walking together down a two-way political street.