Accessibility links
Biden Touting His Bromance With Obama In 5 Clips : It's All Politics During a talk in Washington, D.C., this week, Biden portrayed himself as part of the Obama legacy. He took the opportunity to indirectly knock Hillary Clinton.

Biden Touting His Bromance With Obama In 5 Clips 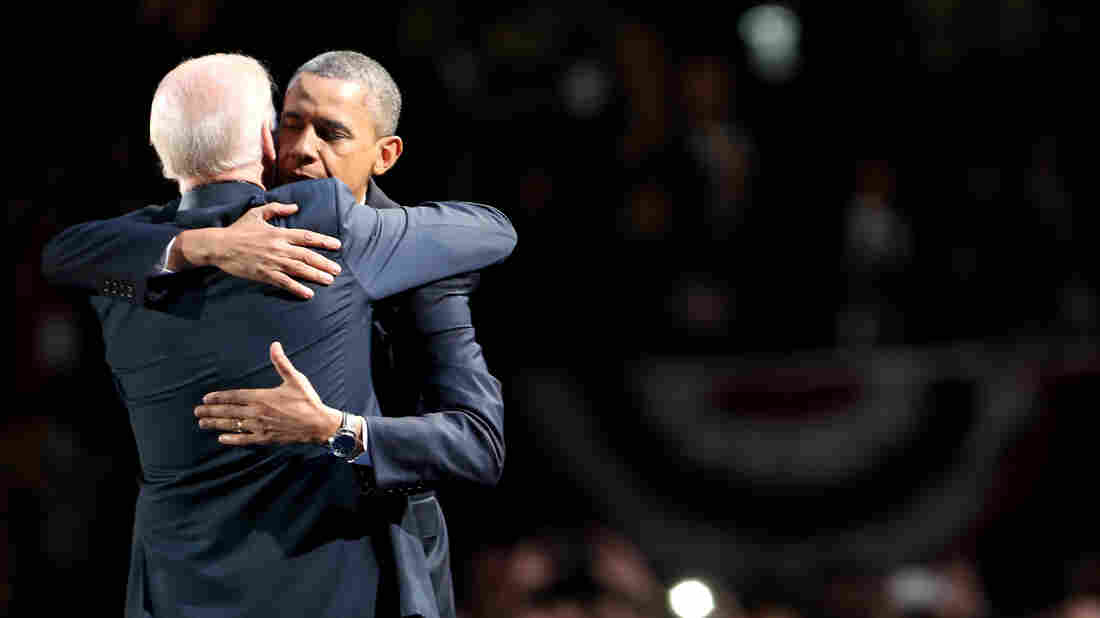 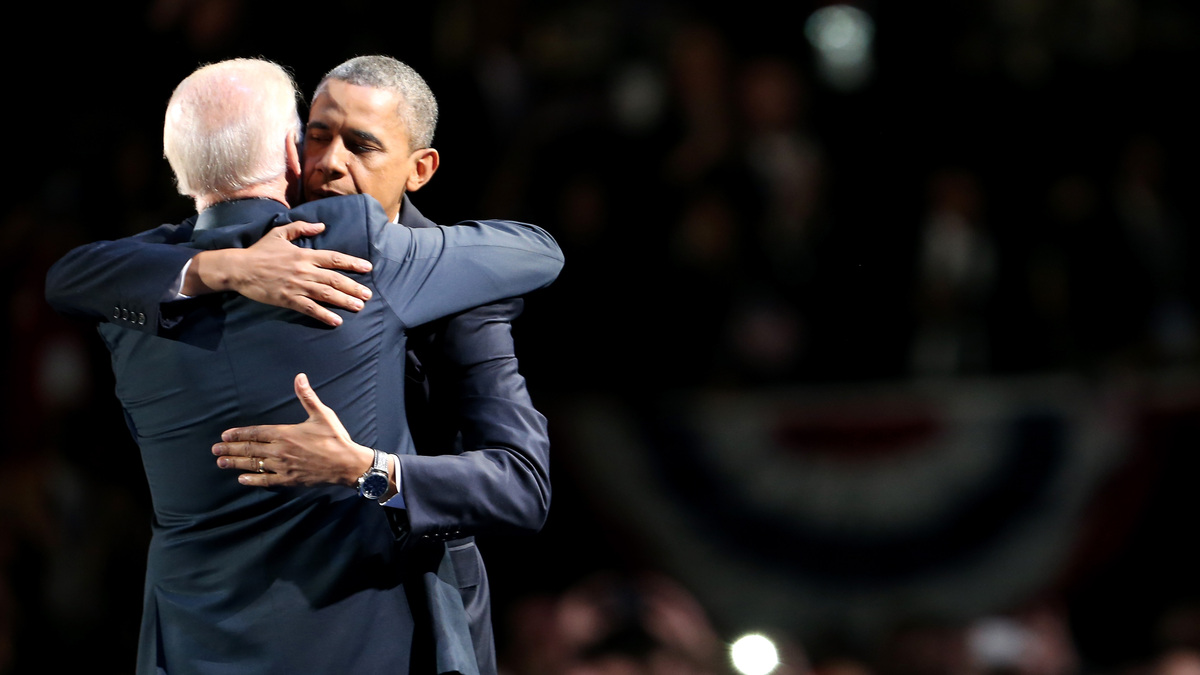 Barack Obama and Joe Biden embrace on stage after his victory speech on election night in 2012.

This week the anticipation around Joe Biden's possible bid for the White House meant any time the vice president opened his mouth, reporters wondered whether he would jump into the presidential race. The answer came Wednesday, when he announced he will not run. He spoke at the White House, with President Obama standing over his right shoulder, and urged the Democratic candidates to run on the president's legacy.

Biden spoke a day earlier at an event to celebrate the legacy of former Vice President Walter Mondale (who served under President Jimmy Carter). That talk was less than an hour, but in his comments, Biden painted himself as closely tied to the Obama legacy, if not an heir to it.

1. "Best decision of my political career was to join the president."

2. "The president and I debated 13 times in 2008 trying to get the nomination, and if you look back on it, the only two people who didn't disagree on a single substantive issue were the president and me. ... So it started off where I knew I was simpatico with the president-elect."

3. "My grandchildren and his children are each other's best friends now; they vacation together."

5. "Well, I said, 'I think we should make one more pass with another UAV to see if it is him [Osama bin Laden].' And, the reason I did that is I didn't want to take a position to go if that was not where [the president] was gonna go. So, as we walked out of the room, and walked upstairs, I told him my opinion — that I thought he should go, but follow his own instincts. But it would have been a mistake, imagine, if I had said in front of everyone, 'don't go' or 'go,' and his decision was a different decision. It undercuts that relationship. So, I never, on a difficult issue, never say what I think finally until I go up into the Oval with him alone."

That last quote got the most attention, so it deserves a bit of explanation. Biden was referring to a Cabinet meeting in which the president went around the table asking for opinions on the Osama bin Laden raid in Abbottabad, Pakistan.

In Biden's version of the events, he presents himself as a man of solid national security credentials. And, he says, only two people in the room were absolutely certain what to do:
CIA Director Leon Panetta said "go."
Defense Secretary Robert Gates said "don't go."

But that version of events differs from other public accounts outlined in three separate biographies written by other Cabinet members.

In Gates' book Duty, the former defense secretary says he and Biden were the "two primary skeptics." Gates wrote: "Biden's primary concern was the political consequences of failure."

And, in Leon Panetta's book Worthy Fights, the former CIA director wrote, "Biden argued that we still did not have enough confidence that bin Laden was in the compound, and he came out firmly in favor of waiting for more information."

None of the previous accounts create the picture Biden presented Tuesday. The vice president's seemingly revisionist history acknowledges that he was a voice of caution in the room, but not out of ideological difference, rather, out of respect. Biden's new version of the events suggests he did not want to publicly contradict the president.

6. The last will-he-or-won't-he-run moment was when Biden seemed to take a clear shot at Hillary Clinton.

"I still have a lot of Republican friends"

In the Democratic debate last week, the candidates were asked, "Which enemy are you most proud of?" Clinton mentioned a few predictable responses and then added "probably the Republicans."

On Tuesday, Biden seemed to criticize that attitude (albeit indirectly; he never mentioned Clinton by name).

"I really respect the members up [on the Hill] and I still have a lot of Republican friends. I don't think my chief enemy is the Republican Party. This is a matter of, you know, making things work."