Accessibility links
West Virginia Tells The Story Of America's Shifting Political Climate : It's All Politics There are few places where Obama is less liked than West Virginia. But for decades, Democrats could count on the state's voters in presidential contests, with only rare exceptions. 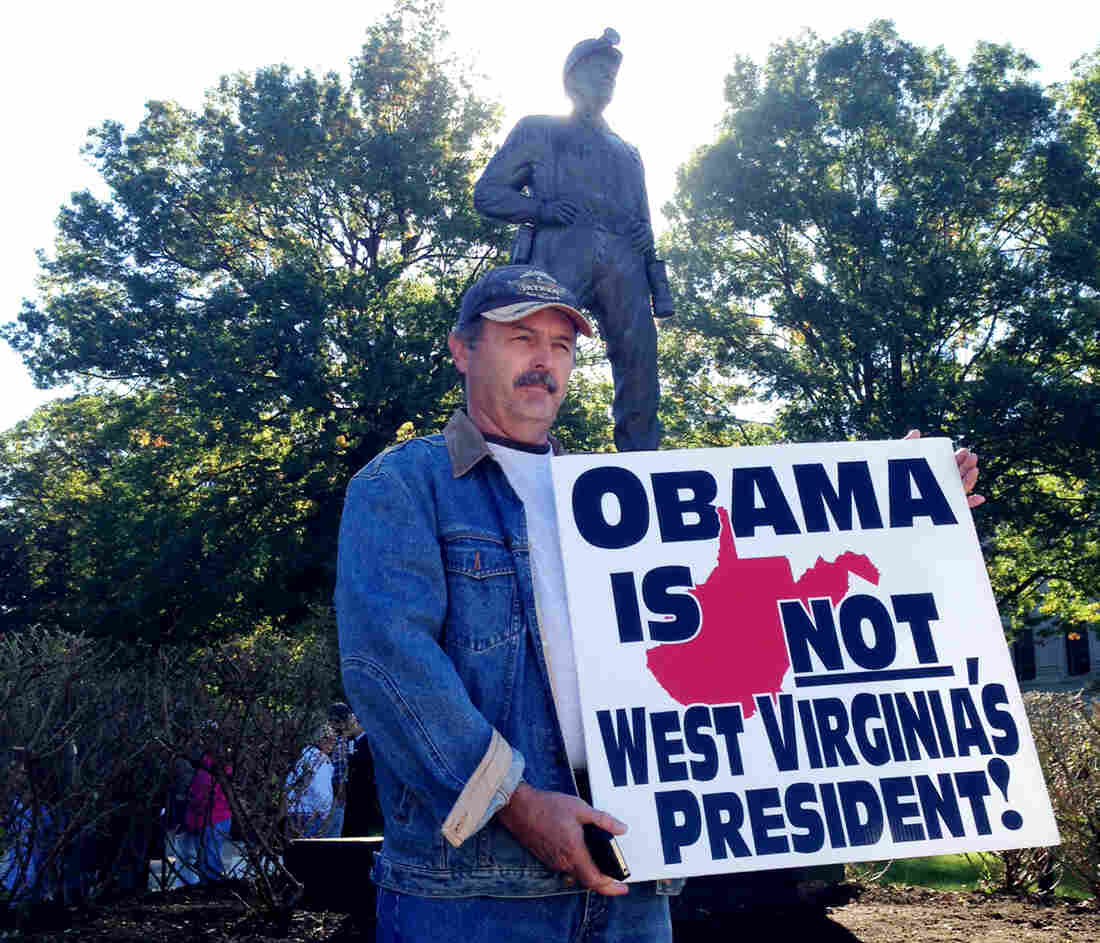 Standing next to the Coal Miner's Statue at the West Virginia Capitol in Charleston on Wednesday, James Bennett rallied alongside other speakers who criticized President Obama's proposed environmental rules that would limit carbon emissions from coal-fired power plants. The rally coincided with president's visit to the state capital to talk about drug abuse. John Raby/AP hide caption 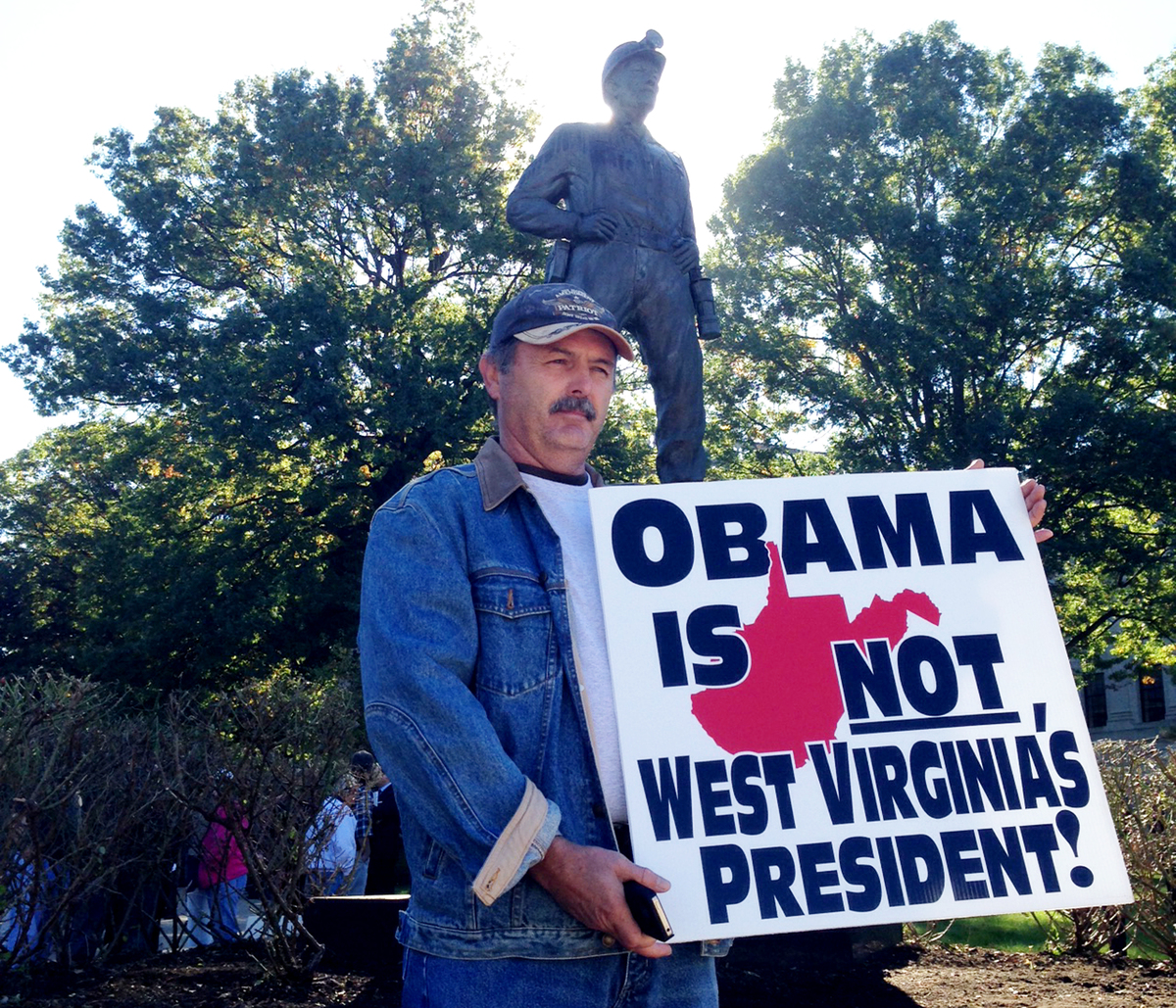 Standing next to the Coal Miner's Statue at the West Virginia Capitol in Charleston on Wednesday, James Bennett rallied alongside other speakers who criticized President Obama's proposed environmental rules that would limit carbon emissions from coal-fired power plants. The rally coincided with president's visit to the state capital to talk about drug abuse.

As Democrats gain from the nation's growing diversity — attracting solid majorities among Hispanic and African American voters — Republicans are gaining among white, working-class voters, a group that was once a Democratic stronghold.

Nowhere is this clearer than in West Virginia, where the president touched down this week to talk about drug addiction.

Number Of Registered Democrats In W.Va. Drops To Historic Low

A few hours before Air Force One was due to land in Charleston, an anti-Obama rally took shape outside the state capitol building.

A dozen speakers, including local officials and state and federal office holders took turns attacking the president for environmental policies they say are killing the coal industry.

"We are going to win the war on coal. We have to stay strong, we have to stand together, and we absolutely have to get through the [2016] election," said Chris Hamilton of the state-funded West Virginia Coal Forum.

About 75 people stand listening, some with signs. There was: "Obama your change destroyed our hope." And another that exclaims, "Obama is not West Virginia's president!"

Today there are few places where Obama is less liked. For decades, though, Democrats could count on West Virginia voters in presidential contests, with only rare exceptions. But Bill Clinton is the last Democrat to carry the state, and in 2012 Obama received just 35 percent of the vote.

Charlotte Kainser, who's married to a retired miner, holds a sign that says "Coal Miners Matter." She shakes her head at the state's worst-in-the-nation jobless rate.

"The economy's bad – bad, bad, bad," Kainser says. "So why would you really want to come to West Virginia? Why would you want to live here?"

Young people are leaving the state in search of jobs, and the overall population is aging.

Kainser says she's still a registered Democrat, but one who can't remember the last Democratic nominee she voted for. That's not uncommon. As for this year, she kind of likes Mike Huckabee — and Donald Trump.

"I vote for the best person," she says. "When it comes down to the main election I would vote for Trump on top of Hillary Clinton," and probably over any of the Democrats, she adds.

In the past few presidential elections, Republicans have won the popular vote over Democrats in West Virginia. Dave Leip's Atlas of U.S. Presidential Elections hide caption

A couple hours north is the campus of West Virginia University. Twenty-year-old Dakota Workman grew up in coal country and comes from a family of Democrats going back many generations. But when Workman registered to vote for the first time, he declared himself a Republican.

"My mom called my grandma and told her, 'You'll never believe your grandson just came home registered Republican.' And my grandma was like, 'Well, good job, I voted Republican since Bush's first election,' " he says, even though she was registered as a Democrat.

Workman, vice chair of the local College Republicans, is a perfect example of what has happened in the state.

White, working-class Democrats are abandoning the party over environmental issues like coal, and on things like gun rights and abortion. There's been a similar shift among such voters nationally.

Meanwhile, still loyal Democrats in the state, like Samantha Shimer, are frustrated by the turn of events.

"For West Virginia, I would say that I feel kind of rock bottom," says the West Virginia University sophomore. "However, my views on the political shift in the country as a whole is it's shifting progressively."

That's good news nationally, she says, but she feels her home state is being left behind, using an analogy:

The state may be a speed bump for progressive Democrats, but it's a rising stronghold for Republicans.