Accessibility links
What Each GOP Hopeful Needs To Do At Tonight's Presidential Debate : It's All Politics There will be a renewed focus on a surging Ben Carson, while Jeb Bush needs a strong performance during the debate — which is focused on the economy — to assuage nervous donors.

What Each GOP Hopeful Needs To Do At Tonight's Presidential Debate

What Each GOP Hopeful Needs To Do At Tonight's Presidential Debate 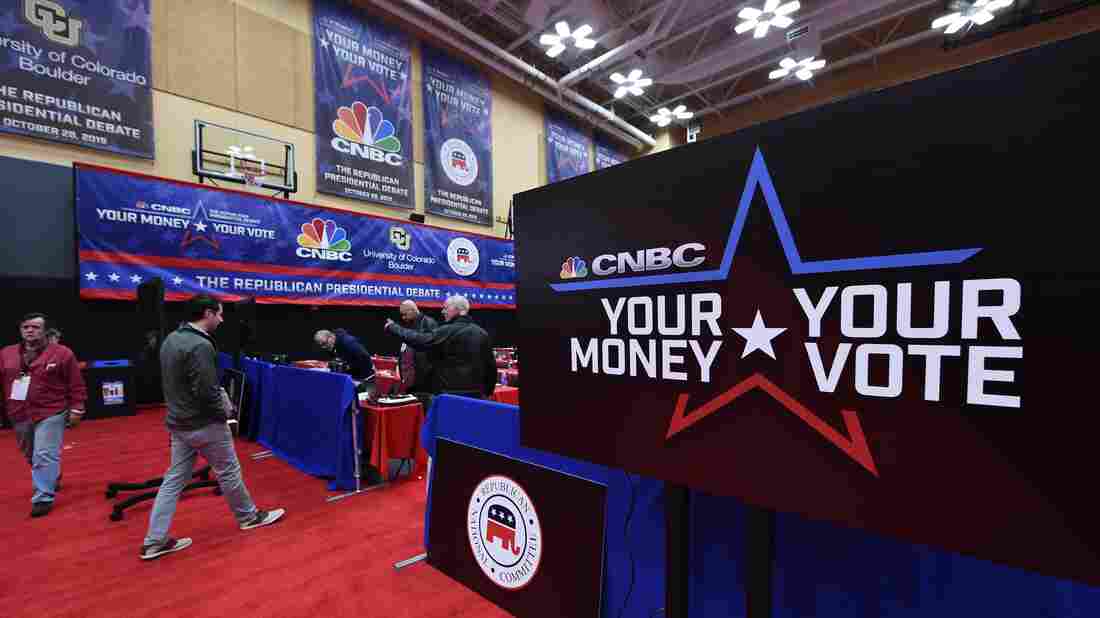 Preparations underway in the Media Center at the third Republican debate on the campus of the University of Colorado in Boulder, Colo. Robyn Beck/AFP/Getty Images hide caption 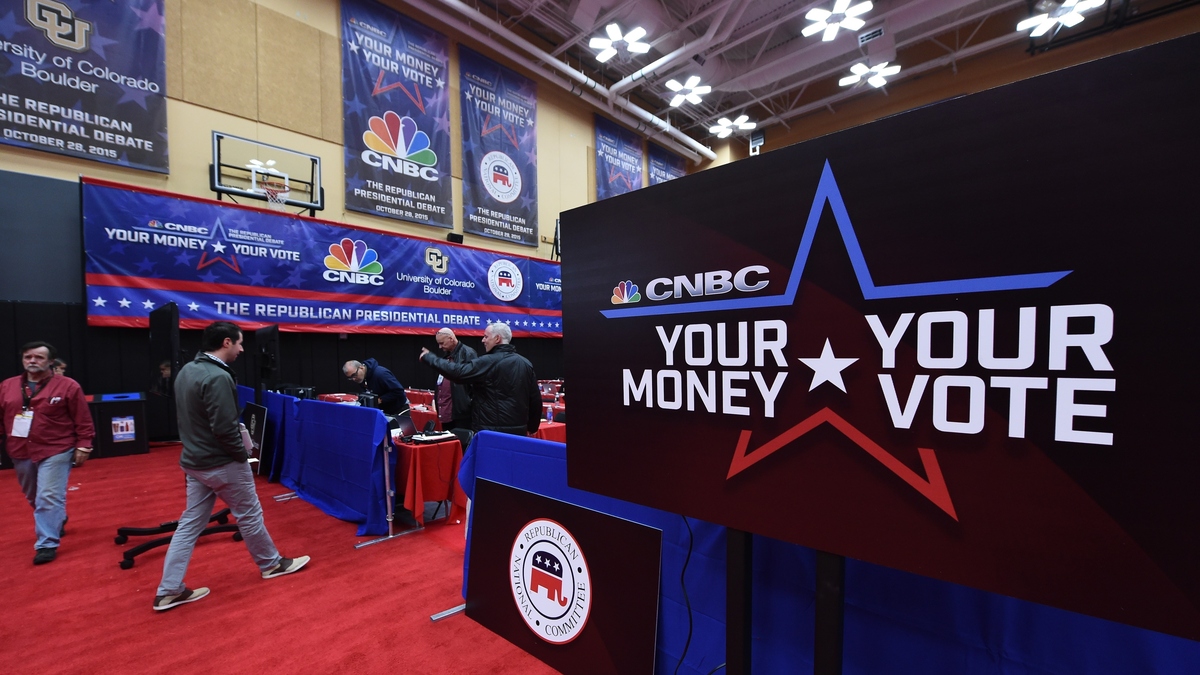 Preparations underway in the Media Center at the third Republican debate on the campus of the University of Colorado in Boulder, Colo.

Republicans are set to take the stage Wednesday night for their third presidential debate. This one is focused on the economy, but you can bet there will be plenty more topics explored.

For many candidates, who have been touting their business background and job creation experience, it gives them an opportunity to try to flex their muscles. Others will need to seize the chance to show they can handle economic concerns, which remain atop voters' minds.

The face-off could also showcase divides within the GOP, as Republicans on Capitol Hill debate a budget deal that could remove the threat of a government shutdown until after the election.

Not all candidates are on board, however. Notably, both Texas Sen. Ted Cruz and Kentucky Sen. Rand Paul have spoken out forcefully against the deal, with Paul coming out late Tuesday pledging to filibuster the new debt-ceiling bill. "It is horrible," he said. "It's hard for me not to use profanity describing."

Need: Policy specifics and a message that goes beyond platitudes of his business experience

Avoid: Pettiness with other candidates and arguing about poll numbers

The billionaire real-estate mogul will again be center stage Wednesday evening, but his grasp on the main spot is slipping. He's fallen behind in Iowa to Ben Carson; the retired neurosurgeon also passed Trump, for the first time, in a national poll this week.

It's getting under Trump's skin, as he's taken to cable and Twitter to insist he's not dropping out. What's more, on Tuesday night, NPR's Don Gonyea reported that Trump was pleading with Iowans to vote for him and expressing disappointment in evangelicals for moving toward Carson. The often-volatile candidate shouldn't spend any time on it during the debate. If he does, it could look out of place.

If Trump's business background makes him the most experienced person to tackle the economy, this type of debate should be his bread and butter, right? He released an expansive tax-reform plan, and he should be ready to defend it from other GOP attacks. He'll also likely need to be on his policy game to explain his plans for entitlement reform and how he would plan to pay for some of his other costly proposals, like his immigration plan.

Need: Show he belongs as a serious contender for the GOP nomination. That means showing competency on the issues, engaging more and delivering clear messages stylistically. 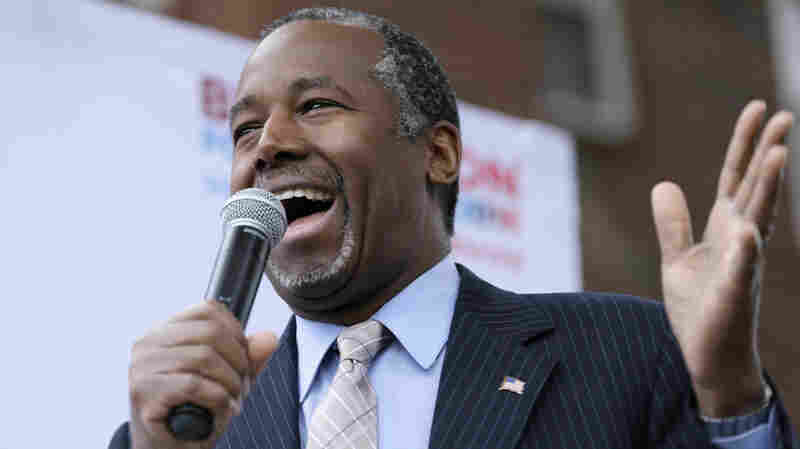 Dr. Ben Carson is on the rise in Iowa and in national polls, leapfrogging Donald Trump in some surveys. Charlie Neibergall/AP hide caption 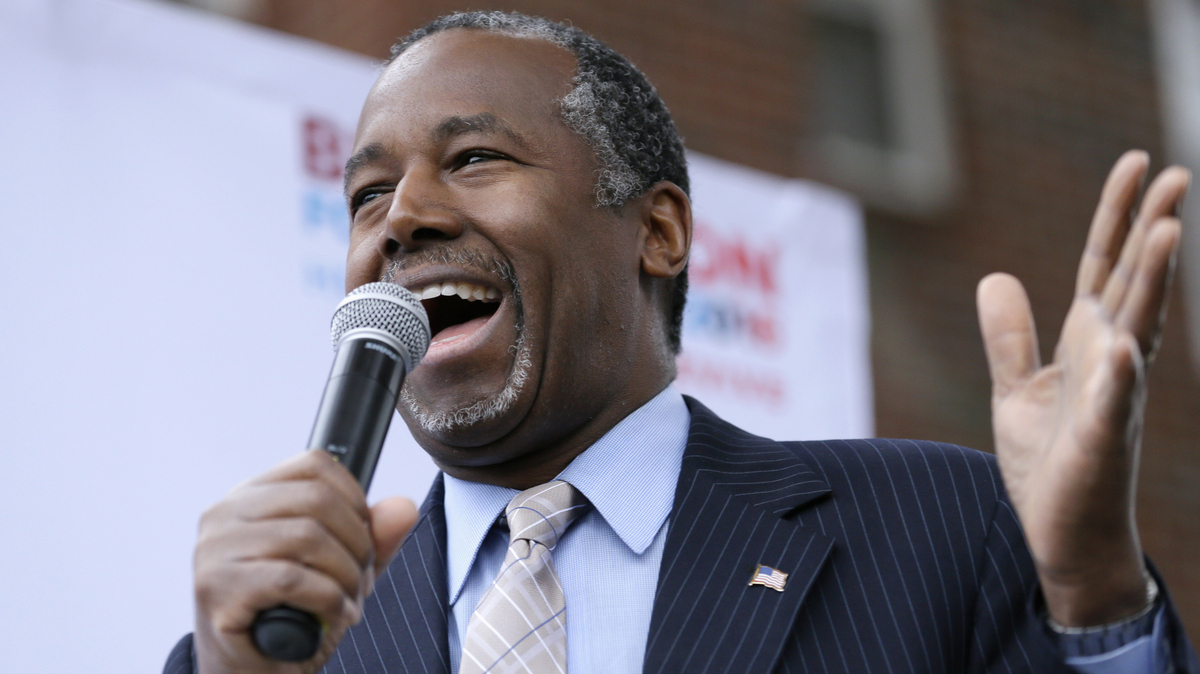 Dr. Ben Carson is on the rise in Iowa and in national polls, leapfrogging Donald Trump in some surveys.

Avoid: Mistakes on economic specifics and, most importantly, fading into the background like he has in past debates.

Despite an unremarkable debate performance last month, Carson has continued to surge and is now neck and neck with Trump. But his continued rise even higher means the pressure is on the soft-spoken doctor to prove he belongs.

On the evening's main topic — the economy — Carson has had some missteps. In an interview with Marketplace's Kai Ryssdal earlier this month, Carson seemed confused over the debt ceiling. He now says he wouldn't sign any bill to raise it as president. He will also likely be forced to defend his plan to replace Medicaid and Medicare.

Need: Show a fluency with policy other than foreign affairs and look like he belongs as a serious, viable alternative to Trump or Carson

Avoid: Being defensive about his relative youth and inexperience and getting dragged down by Jeb Bush

Rubio had a strong showing in the last debate, and another good performance could slingshot the Florida senator further. Though he's typically seemed more at ease on foreign policy questions, he needs to point to his experience on the economy during this face-off.

He needs also to find a way to sidestep one of the most damaging comparisons that his ally-turned-adversary Jeb Bush has been leveling against him — that he bears a striking resemblance to another first-term senator who took the White House too soon and sunk the economy.

Need: Another breakout moment like she had in the first debate

Avoid: Being on the defensive about her business background

Fiorina surged after her commanding performance in the first debate — despite being relegated to the "happy hour" debate — and did well enough to earn her a promotion onto the main stage. In the second gathering, she had a good performance again, but hasn't capitalized on it. She's actually been slipping in the polls and national conversation since.

The economy should be her place to shine, given her business background. But she needs to push back effectively, like she has for the most part in other debates, on criticisms of her tenure at Hewlett-Packard, her ouster and resulting layoffs.

Need: A commanding performance that reassures nervous donors, and tangibly translate his record as Florida governor to GOP voters 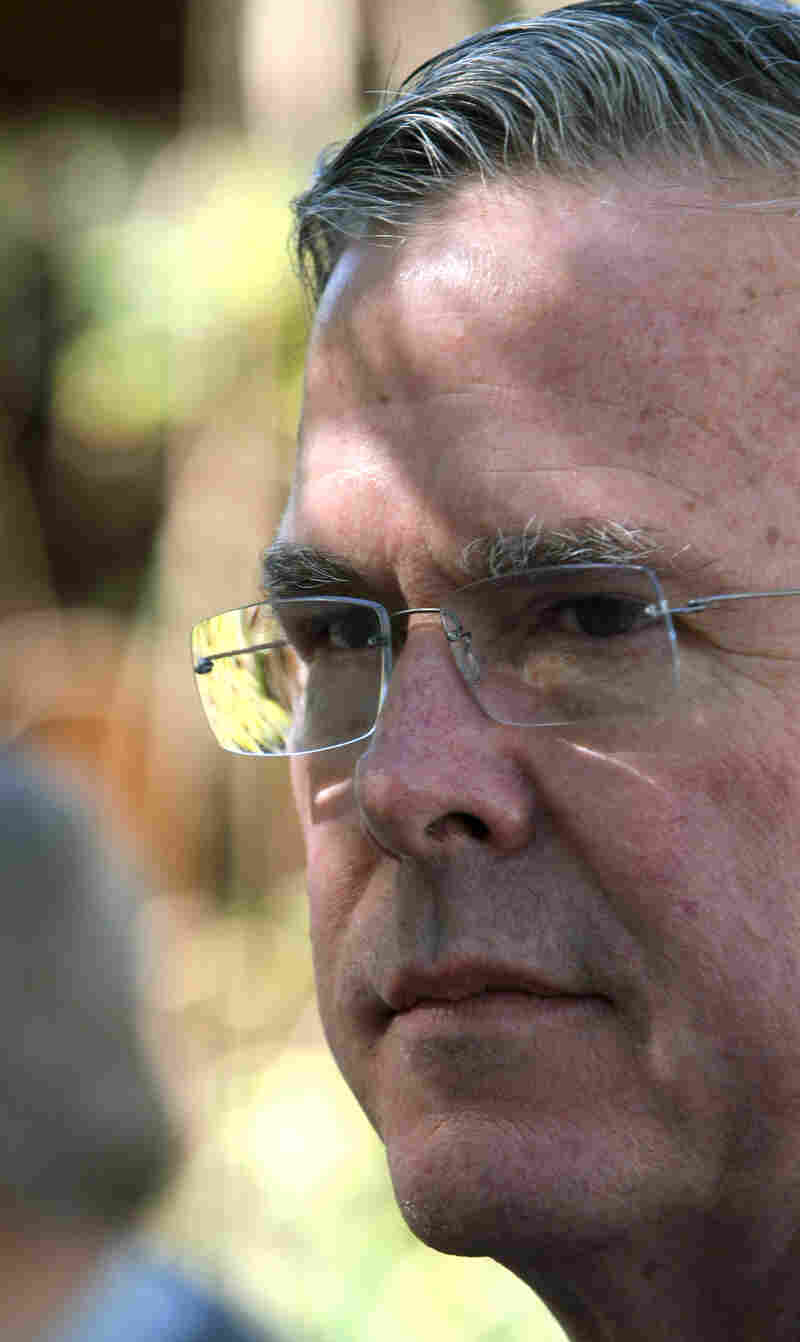 Former Florida Gov. Jeb Bush has made staff reductions in recent days to keep his campaign afloat. Now, nervous donors will be looking for him to have a strong debate performance. Lance Iversen/AP hide caption

Avoid: Getting overshadowed by Rubio and Trump, being forced to defend his brother's economic record

Probably no one has more at stake in Wednesday night's debate than Bush. He's tried to assuage concerns about his candidacy, but the headlines — on downsizing and changing course — have not helped. Bush has slipped since being center stage in the previous two debates. He's now in fifth place in national poll averages.

The good news for Bush is that he has a good story to tell about his record as Florida governor — from slashing spending to an economy that did well while he was in office. The trick is whether that message, from the most policy-focused candidate in the race on the GOP side, will translate to voters. It hasn't so far, despite millions in ads.

The bad news — Democrats, and even some Republicans, blame his brother, former President George W. Bush, for starting the national economic slump, and other candidates (read: Trump) have not been shy about tying Jeb to George.

Need: Distinguish himself from other conservatives on his approach to the economy

Avoid: Taking blame for shuttering the government two years ago and looking like he's advocating for a shutdown now

Cruz has benefited from the previous debates and is climbing in the polls, particularly in Iowa. Wednesday's debate gives him the opportunity to seize a top issue on Capitol Hill — the budget and the deficit.

The Texan rode a Tea Party wave to the Senate, and now he needs to set himself apart as their candidate from several other choices. The budget and debt-ceiling debate and the deal between GOP leaders and the White House lets him do just that.

But it could be a double-edged sword for Cruz. He'll have to defend why the deal — which would avoid a damaging government shutdown and a debt default — is better than the shutdown many Republicans blame him for causing two years ago, because of his protests on Obamacare.

There's a big chasm in polling between the top-tier contenders and these bottom four who made the debate. Their challenge will be to try to take on their top rivals, seize as much of the time as they can, and stay relevant in the conversation. All have points on the economy they'll try to make.

Huckabee has long been a proponent of a flat tax;

Christie will try to defend New Jersey's economy, which was strong four years ago when he considered running for president, but has since had hiccups;

Kasich's biggest task may not be touting the Ohio economy — something he's done often — but to not appear outside the GOP mainstream;

Paul needs something to break through to help his sagging poll numbers. Expect him to try to seize some of Cruz's mantle on the congressional budget deal and the debt ceiling — reminding voters he's planning concrete steps to stop it.

The task for this quartet is simple — just try to have a knockout moment that could give them any buzz that could somehow help them into the main debate next month. That's all. 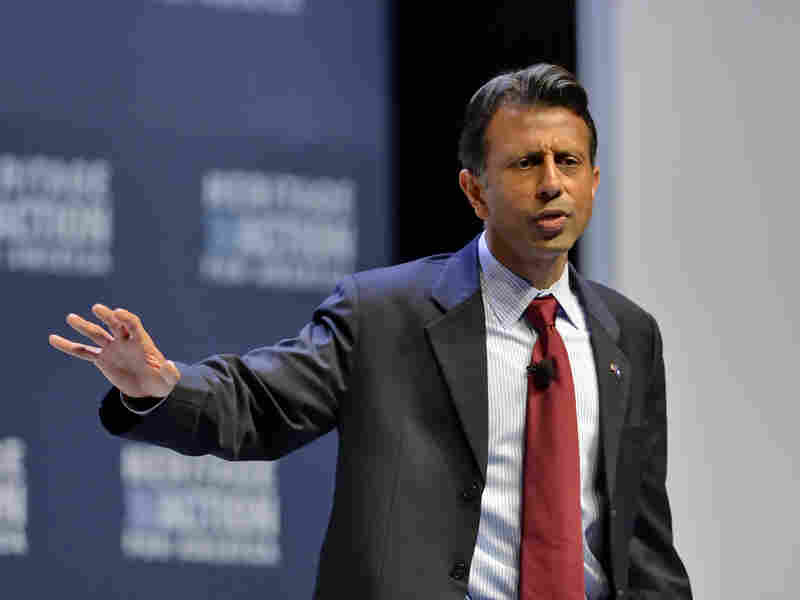 Upset with the debate qualification criteria that put him again in the undercard debate, Louisiana Gov. Bobby Jindal had threatened to boycott the Boulder debate. Richard Shiro/AP hide caption 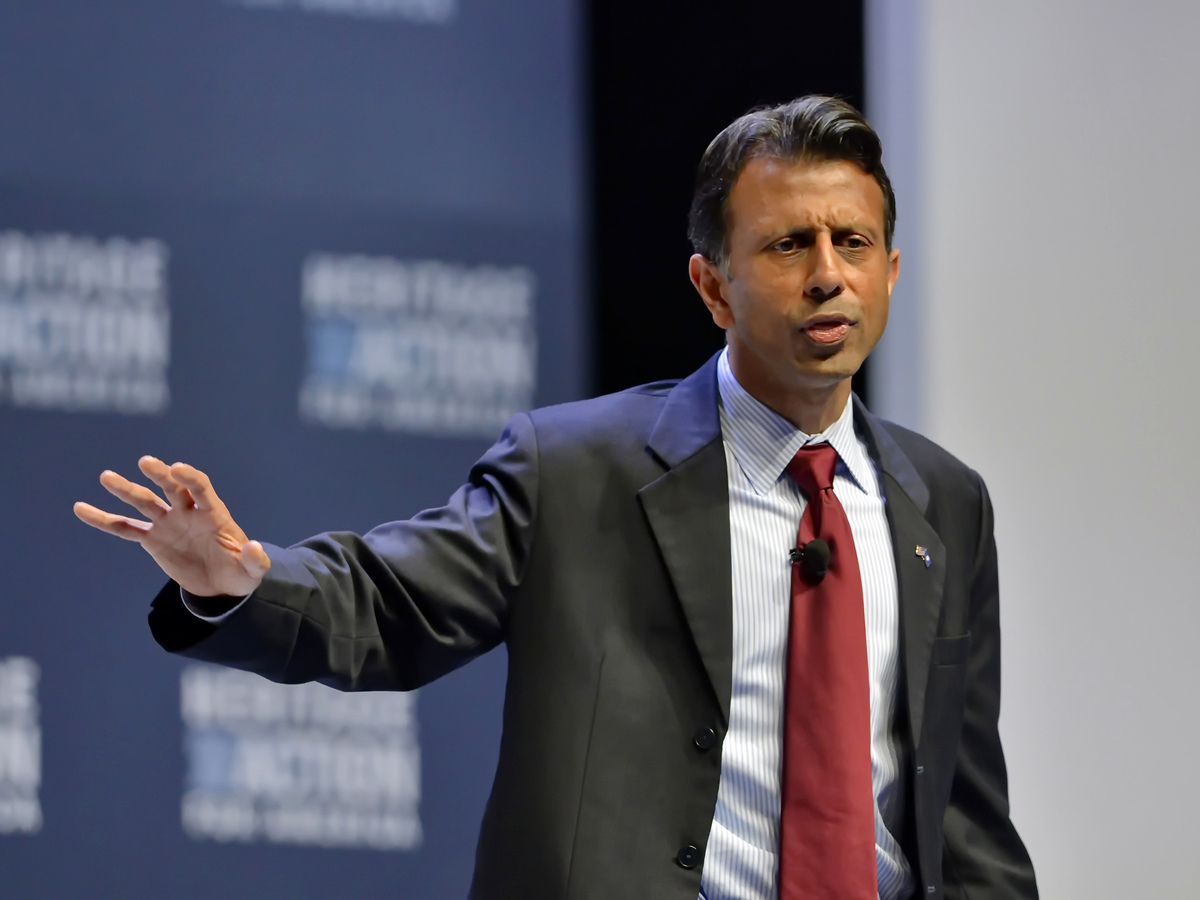 Upset with the debate qualification criteria that put him again in the undercard debate, Louisiana Gov. Bobby Jindal had threatened to boycott the Boulder debate.

Graham and Pataki only barely qualified for the debate. (Former Virginia Gov. Jim Gilmore didn't make the cut again.) Both had good performances last time, but will need to explain how they're the best pick on the economy.

Santorum — who's often pigeonholed as solely a social conservative — actually has very deep blue-collar appeal. This topic could give him a moment to shine. The loss of manufacturing jobs and how to get them back is a critical part of his stump speech.

Jindal — who had threatened to boycott the debate because of the polling criteria it used — could find himself on the defensive for Louisiana's struggling economy and budget under his watch.