Accessibility links
4 Republicans Battle For Attention At Undercard Debate : It's All Politics Rick Santorum, Bobby Jindal, George Pataki and Lindsey Graham tried to make the best of it as they were relegated, yet again, to an earlier debate instead of the main prime-time stage. 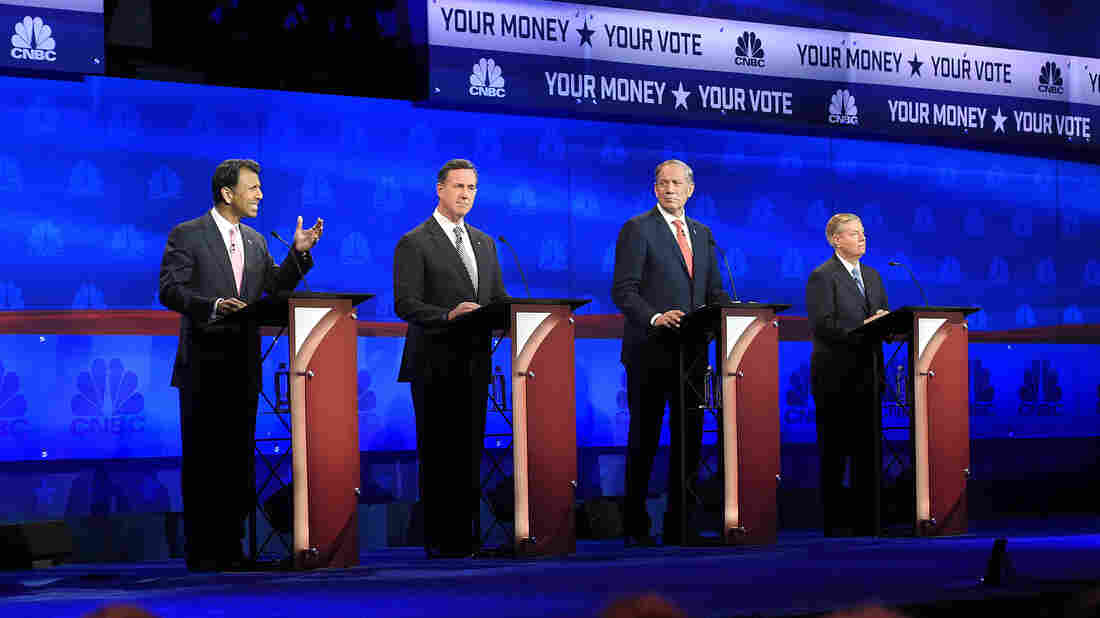 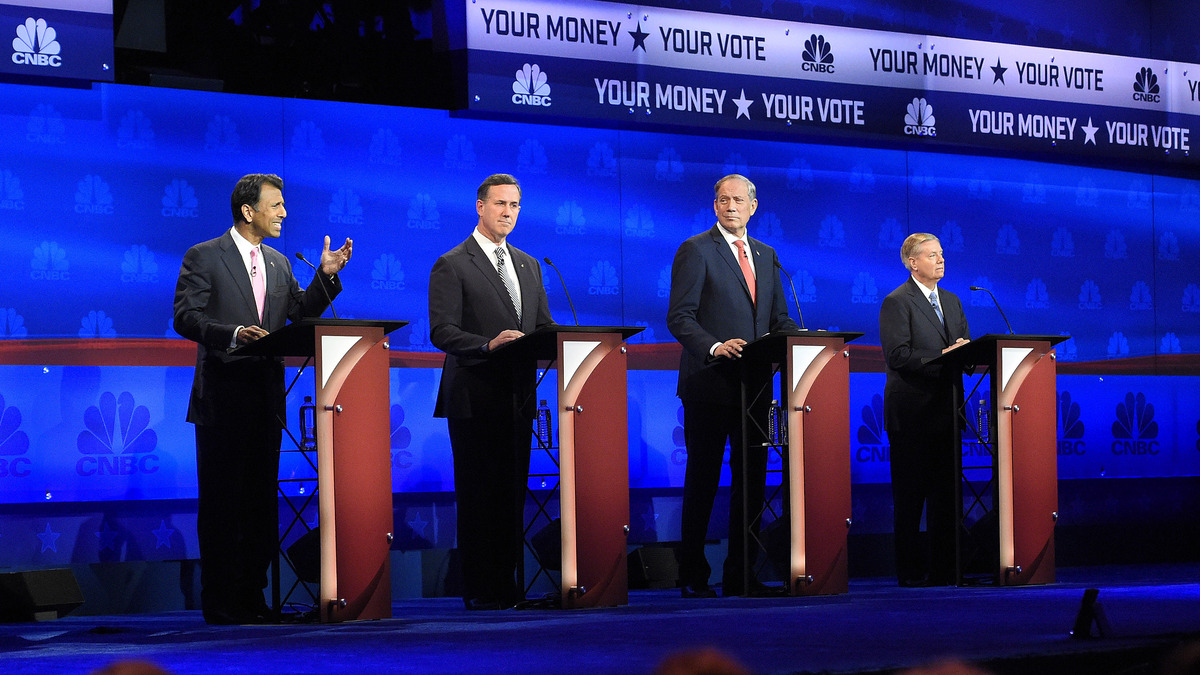 Former Pennsylvania Sen. Rick Santorum, Louisiana Gov. Bobby Jindal, former New York Gov. George Pataki and South Carolina Sen. Lindsey Graham may have been the warm-up act for the main GOP debate Wednesday night, but they all tried to make the best of it.

Jindal tried to hammer home that he's the most conservative, touting his credentials as governor — but he also had to repeatedly defend his economic record that even some home-state Republicans have criticized.

Santorum talked up his blue collar appeal and his ideas to increase manufacturing in the country. Pataki tried to stake out the center, embracing climate change and working across the aisle.

And Graham was by far the most amusing of the evening, with multiple zingers and laugh lines, trying to show that he would be the best commander-in-chief and the best to protect national security.

The retired Air Force JAG officer and the only military veteran on stage had the best performance in the last debate too, and it did nothing to jumpstart him in the polls, so a strong showing may not matter.

Being the warm-up act is beginning to feel familiar for four candidates.

The quartet, all just barely registering on national polls, will be trying to have a breakout moment that could jumpstart their campaign and launch them onto the next main debate stage — as business woman Carly Fiorina did in the first debate.

Our liveblog of the first debate is below. You can also follow along with NPR by using the hashtag #nprdebate and see the live Twitter chat here. Also read our analysis on what each candidate in both debates needed to do tonight.

7:10 p.m. In closing statements, Graham gets almost emotional. "America is great again," riffing Trump's slogan (Democrats have done this too). "If you make me your president, our best days are ahead." Pataki also makes a pitch for the center, emphasizing he can work across the aisle and believes in climate change. Santorum hones in on his cross-party appeal, saying he was elected in Democratic territory (that is, until he lost in 2006) and Jindal also tries to hammer home his Christian conservative credentials.

7:05 p.m. The always-fun lightening round questions — what apps do you use on your phone? Jindal still has a Blackberry so he can only play Bricklayer. Santorum says he checks the MLB, NHL and Wall Street Journal apps. Pataki tries to make a play for millennials, saying he uses Uber, but then kind of has a disconnect when he says it's because he "used to be driven around" as governor. Graham — a recent convert from his flip phone — says he only has one because Donald Trump gave out his phone number and he had to get rid of it. "Don't give Donald Trump your cell phone number," he says. For the record, he now likes the Fox News app.

Then, should the day after the Super Bowl be a national holiday? Jindal and Santorum both say yes, hawking the success of their teams (Saints and Steelers respectively). Pataki jokes it shouldn't be because he is a long-suffering Jets fan. And Graham, somehow, manages to turn it around to a national security jab, saying the real holiday should be when Barack Obama is no longer commander-in-chief.

Oh, also his parents owned a bar, so " if you're looking for good beer policy, i'm your best bet," he says reviving an earlier question about beer industry in Colorado. Santorum had also noted that Colorado-brewed Coors Light is his favorite.

6:55 p.m. Things got a bit testy between Jindal & Santorum. Jindal questions whether Santorum would cut government and taxes enough. The moderators again press Jindal though on his own record as governor, saying his cuts caused a deficit. He says it's balanced now though.

6:45 p.m. CNBC's Rick Santelli (credited with spurring the Tea Party movement) essentially tries to call out Santorum for not being a true conservative because he supports the Ex-Im bank — something potentially revived by a coalition of moderate Republicans and Democrats this week in the House. Santorum — who has a more populist economic plan than most Republicans — defends his support of it and says it's necessary for the U.S. to have a level playing field.

6:40 p.m. On the question of paid leave — which was revived after likely next House Speaker Paul Ryan said he needed a better work-life balance to take the job. Jindal says it's a good idea — people should have better wages and paid time off — but that doesn't mean the government should mandate it. "The government can't wave a magic wand and make it happen."

6:30 p.m. Graham is making this debate lively. When asked by moderator John Harwood whether he should even be in the GOP debate or the other party's because of his views on climate change and immigration, he doesn't back of his positions that are at odds with most of his rivals. (He believes in climate change, but also jokes he listens to others who know because he did bad in science).

But then Graham goes into almost-screaming, passionate mode. "At the end of the day i'm trying to solve a problem and win an election. I'm tired of losing," he declares, hitting both Hillary Clinton and Bernie Sanders, who he jokes "went to the Soviet Union for his honeymoon and I don't think he ever came back." It's a good moment for Graham. But he also had good moments in the last debate, and his numbers didn't budge.

6:25 p.m. Pataki is asked about cyberwarfare and Chinese attacks — what would he do to combat it? Not a military response he says, but a "coordinated response" and one agency should be used to react. Graham also is asked the question, and it's of course right in his wheelhouse. He hits Obama for being too weak on foreign policy and that China and Russia aren't afraid of U.S. leadership. He says if elected he'd give them two options — an open hand and a clenched fist. "Make me commander in chief and this crap stops," Graham says.

6:20 p.m. Jindal gets a question about his own record as governor — something under fire in his own home state. He's defending his budget and economic proposals that even Republicans have criticized — including the GOP nominee to succeed him, Louisiana Sen. David Vitter. Don't be surprised if this comes up again frequently tonight.

6:11 p.m. After a late start, there are no opening statements for the candidates. But they each get to list their qualifications in the first question — Jindal and Pataki, the only governors on the stage, tout how they cut government. Santorum takes a slight jab at Jindal (who also used to be a member of the House) saying you can't just attack Washington, you have to be there to try to make things work. Graham pivots to national security — his forte — and takes a hit against Hillary Clinton on the Veterans Administration.