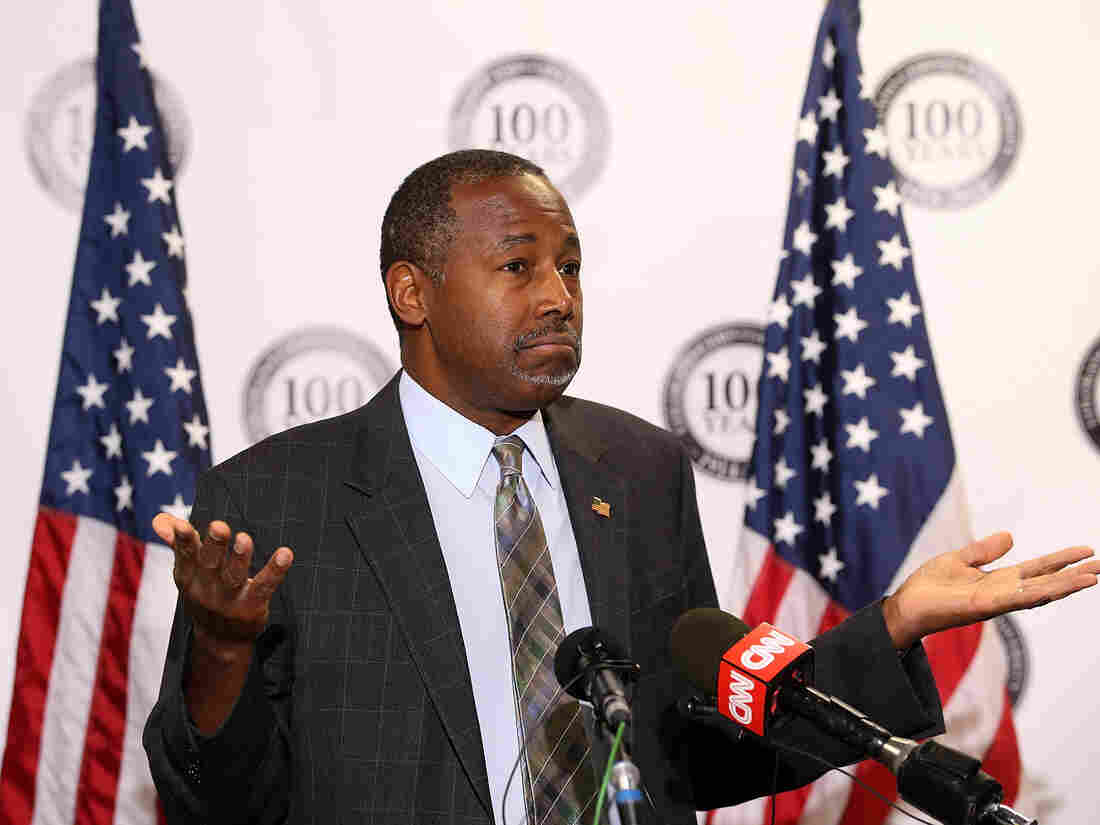 Ben Carson — and his fellow candidates — are slashing tax revenues. Do we know how they'll pay for them? Justin Sullivan/Getty Images hide caption 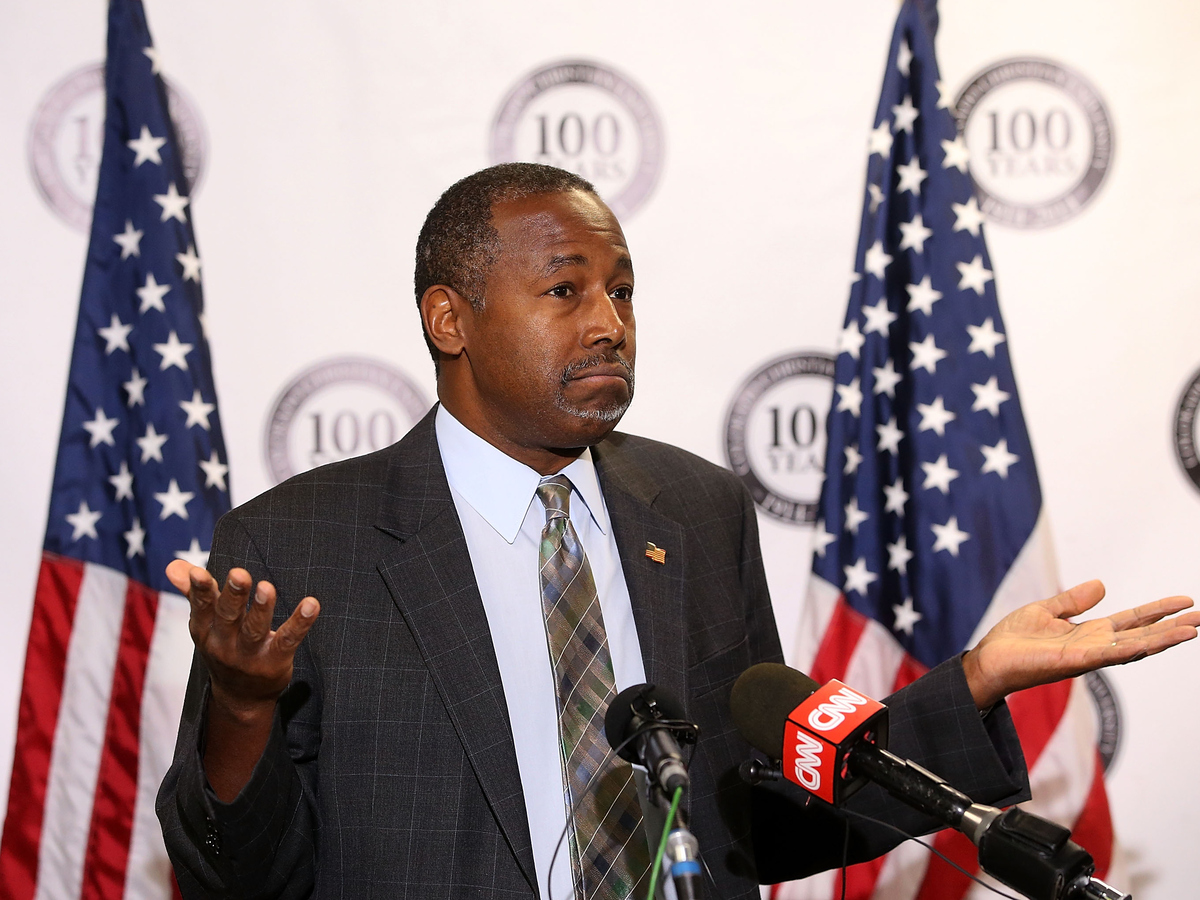 Ben Carson — and his fellow candidates — are slashing tax revenues. Do we know how they'll pay for them?

In Wednesday night's GOP debate, moderators pressed GOP candidates on their massive tax reform pans. Moderator John Harwood asked Donald Trump about the idea that his massive tax cuts would make the economy take off "like a rocket ship" (an idea that Trump staunchly defended).

Ted Cruz got at a similar idea, referencing the tax plan he unveiled Thursday: "[I]t costs, with dynamic scoring, less than $1 trillion. Those are the hard numbers. And every single income decile sees a double-digit increase in after-tax income. ... Growth is the answer. And as Reagan demonstrated, if we cut taxes, we can bring back growth."

Does reducing taxes grow the economy?

Tax cuts can boost economic growth. But the operative word there is "can." It's by no means an automatic or perfect relationship.

We know, we know. No one likes a fact check with a nonfirm answer. So let's dig further into this idea.

There's a simple logic behind the idea that cutting taxes boosts growth: Cutting taxes gives people more money to spend as they like, which can boost economic growth.

Many — but by no means all— economists believe there's a relationship between cuts and growth. In a 2012 survey of top economists, the University of Chicago's Booth School of Business found that 35 percent thought cutting taxes would boost economic growth. A roughly equal share, 35 percent, were uncertain. Only 8 percent disagreed or strongly disagreed.

But in practice, it's not always clear that tax cuts themselves automatically boost the economy, according to a recent study.

"[I]t is by no means obvious, on an ex ante basis, that tax rate cuts will ultimately lead to a larger economy," as the Brookings Institution's William Gale and Andrew Samwick wrote in a 2014 paper. Well-designed tax policy can increase growth, they wrote, but to do so, tax cuts have to come alongside spending cuts.

And even then, it can't just be any spending cuts — it has to be cuts to "unproductive" spending.

It's not just Gale. According to a 2012 report from the nonpartisan Congressional Research Service (referenced by the New York Times' David Leonhardt in a 2012 column), top marginal tax rates and economic growth have not appeared correlated over the past 60 years.

One other nuance — it depends on the type of tax cut. You can imagine how cutting taxes for lower earners might boost activity more than cutting the top marginal rate — lower-income Americans with an extra $100 are more likely to spend that money than a millionaire.

Likewise, the economic research firm Moody's found in 2008 that temporary tax cuts (like rebates) could boost GDP, but permanent ones had a much weaker effect. Meanwhile, boosting spending on programs like food stamps and unemployment had a stronger effect, they found.

In short, if your sole, ultimate goal is faster growth, tax cuts might not be the best policy.

Why It Matters, Part 1: What do these plans cost?

This might seem like a stupid question — of course economic growth matters! — but it matters doubly for these tax plans because it affects how much they end up costing. And most of the Republicans' plans look really, really expensive.

A lot of the conversation about revenue in this week's debate focused on estimates from the Tax Foundation, a right-leaning tax policy think tank in Washington, D.C., that has scored many of the GOP candidates' tax plans.

That group releases what are called static and dynamic scores. Dynamic scores are complicated: They take into account potential economic effects — for example, they assume that tax cuts can generate economic growth and therefore, revenue. Static scores are much simpler, ignoring those effects.

To see this fight in action, look back to earlier this year, when the Congressional Budget Office, with a new GOP-appointed director, announced it would start issuing dynamic scores.

Or look at the Tax Foundation. Many (Gale included) say the group's dynamic scores are too generous, making policies like tax cuts look cheaper than they really are.

And here's where the bottom line comes in — even if you do believe the Tax Foundation's dynamic scores are way too generous, as of earlier this month, they found that one candidate (Rand Paul) comes out with a plan that won't slash revenue, while most of the other candidates will cut it by more than $1 trillion over 10 years.

Trump's plan, by this math, cuts revenue by $10 trillion over 10 years.

Why It Matters, Part II: How do you pay for it?

"[A tax cut] won't pay for itself. You're not going to cut taxes by a dollar and get a dollar back in revenue from the growth," said Doug Holtz-Eakin, former director of the CBO.

In short, big revenue-cutting tax plans would have to come up with some big spending cuts. Marc Goldwein, senior vice president at the Committee for a Responsible Federal Budget, uses Gov. Jeb Bush's tax plan as an example.

"Gov. Bush's tax cut is between $1 and $4 trillion," Goldwein said. "He's making his job that much harder when not only does he have to reduce the debt but also he's got to pay for his tax cuts first."

Ben Carson's tax plan, for example, appears to leave a $2 trillion gap between spending and revenue, according to math from CNBC debate moderator Becky Quick this week (and Carson's math — in which he seemed to say he would somehow tax all of GDP, not just income — is not how taxes currently work).

For its part, the Carson campaign tells NPR that all will eventually be revealed.

"We expect to issue our tax plan in a few weeks, then all your questions and those of Ms. Quick will be ably answered," campaign spokesman Doug Watts wrote back. "We are not going to piecemeal answers because we continue to refine the details, which will be professionally scored and prove Ms. Quick wrong."

"[Lower revenue] means they must be claiming they're willing to fix it on the other side of the budget," Holtz-Eakin said. "Show me how you're going to do that."

He argues that tax plans can't be viewed in isolation; a tax plan that cuts revenue should simply come alongside other plans that cut spending.

"I don't think they're realistic, but I don't think that's the real way to indict them," he added. "They're campaign plans. They're never like legislation."

Candidates are presenting their dream worlds of fiscal policy, he says — the way the U.S. would operate if they could get everything they wanted through Congress (which won't happen).

Viewed this way, different campaigns appear to be saying different things: Marco Rubio wants families with kids to have more income. Bush and Paul, for their parts, are aiming for more business investment and growth. And so on.

Then again, this is also kind of a disappointing idea — if voters aren't supposed to read tax plans as, well, tax plans, what incentive do campaigns have to make them into serious-looking proposals?

Candidates tend to oversimplify the relationship between tax cuts and economic growth.

This story is part of NPR's fact checking series, "Break It Down," in which we try to cut through the spin and put things in context. Have something you want us to fact check? Put it in the comments section or send us an email at nprpolitics@npr.org.