Accessibility links
Cruz Deals Trump A Setback In Iowa; Clinton Narrowly Edges Out Sanders : It's All Politics Ted Cruz was the big winner, and Marco Rubio lost second place to Donald Trump by just 1 percentage point. For Democrats, the margin of victory was exquisitely small, with voters' age a key factor. 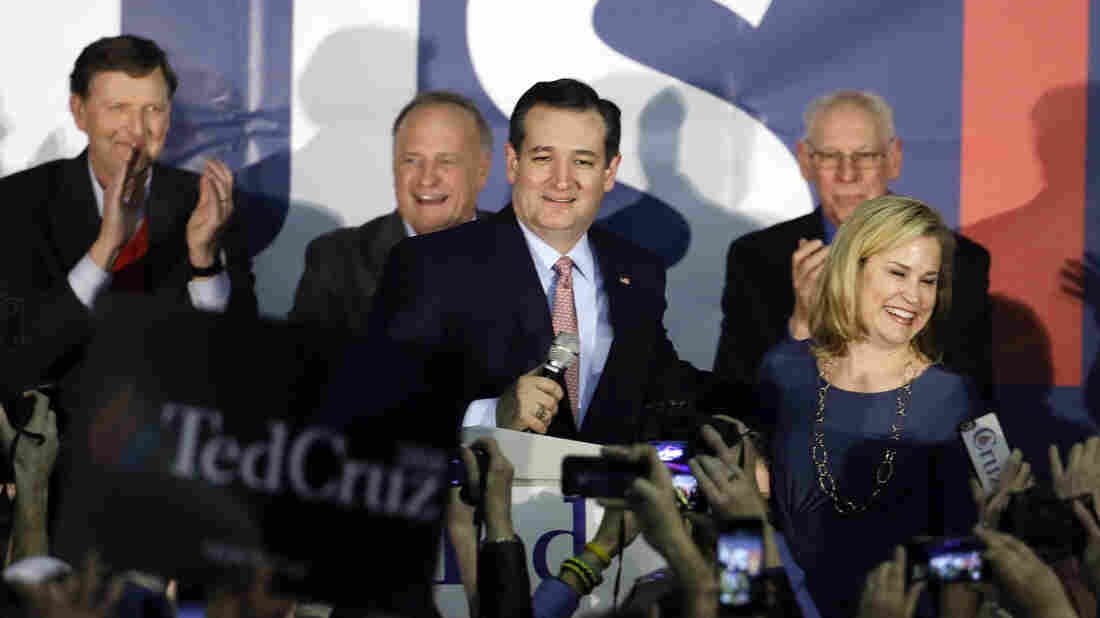 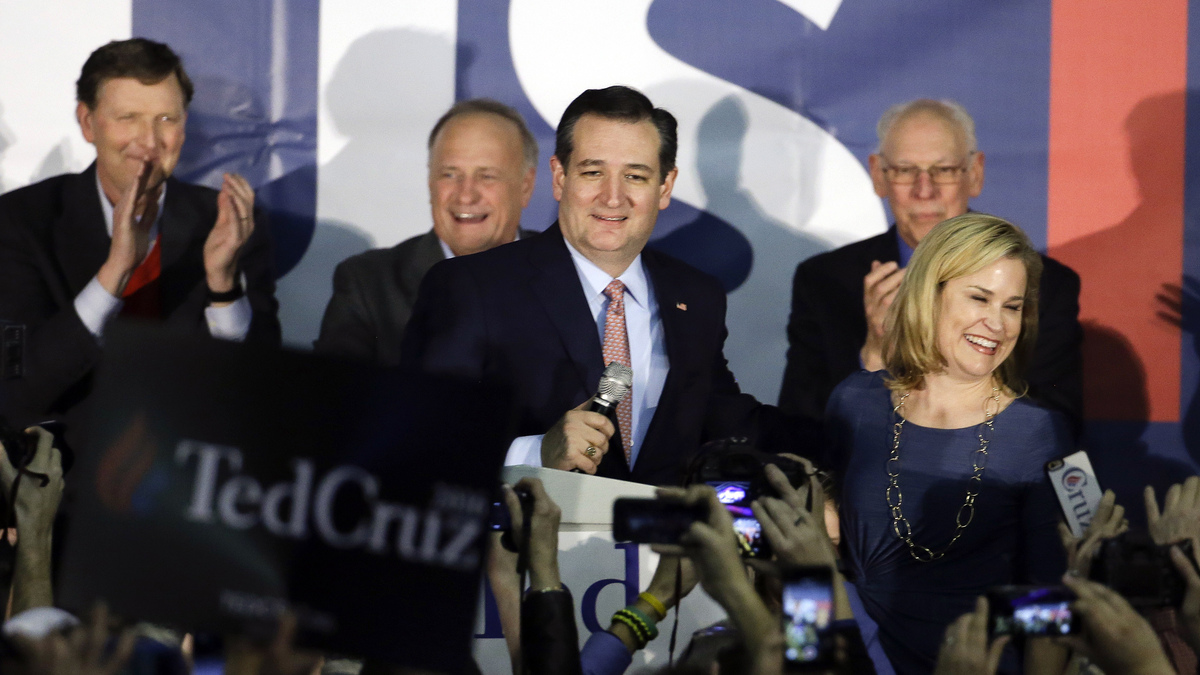 Iowa has once again proved its perennial resistance to political inevitability and the power of personality.

In this year's iteration of the Iowa caucuses, national polling leaders Donald Trump and Hillary Clinton had their campaign momentum slowed in significant ways by party activists who preferred their rivals.

A big win in Iowa might have set either leader on the path to a relatively easy nomination. But that was not to be, and now both Trump and Clinton face difficult and perhaps protracted struggles to overcome rivals they had hoped to dismiss.

It was perhaps a greater shock to Trump, who has carried all before him since entering the contest last summer — including the polls in Iowa in January. Clinton had known she was in trouble for weeks, as her Iowa lead over Bernie Sanders evaporated.

The big winner on Monday night was Ted Cruz, the Texas senator beloved by conservative hardliners in the media and on the hustings. Cruz won the GOP caucuses with 28 percent of the vote, eclipsing Trump's 24 percent.

Close behind them was Marco Rubio, the Florida senator who had risen rapidly in recent weeks. He finished only a single percentage point behind Trump.

All that contributed to a sense of deflation surrounding Trump as he delivered his concession speech. After dominating the Republican campaign for six months with his braggadocio and elaborate promises, Trump spoke only briefly Monday night and then left the stage. He told supporters he had done far better than doubters had projected last summer, but did not mention the now-discredited lead he had taken in several Iowa polls in January.

Trump will now have his first opportunity to show his mettle as a contestant in the public arena. Everyone knows Trump can throw a punch; now we will see how well he can take one.

Cruz, meanwhile, survived a withering crossfire from Trump and Rubio, a tag team that had been attacking him for weeks. Trump called Cruz "a total liar" for calling him a supporter of Obamacare. Rubio aired ads parodying Cruz's TRUSTED logo with ads labeling the Texan CALCULATED instead.

In the end, Cruz relied on the strategy that had worked for Rick Santorum in 2012 and for Mike Huckabee in 2008, going straight at the state's evangelical Christian voters. That group was once again estimated at 60 percent of the GOP caucus population. And Cruz was clearly their preferred entrant in a field of a dozen that included both Santorum and Huckabee. 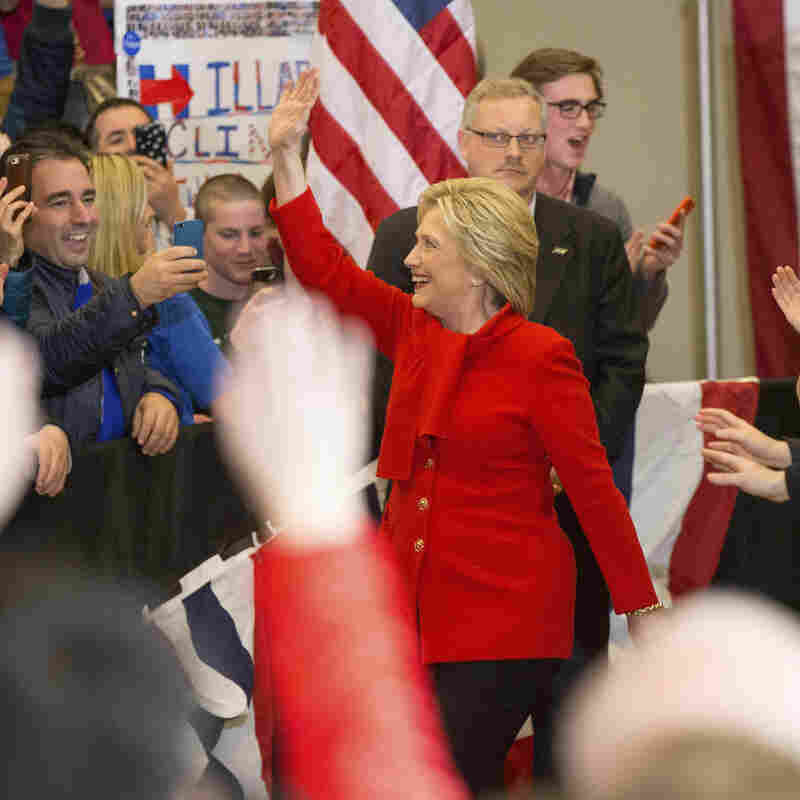 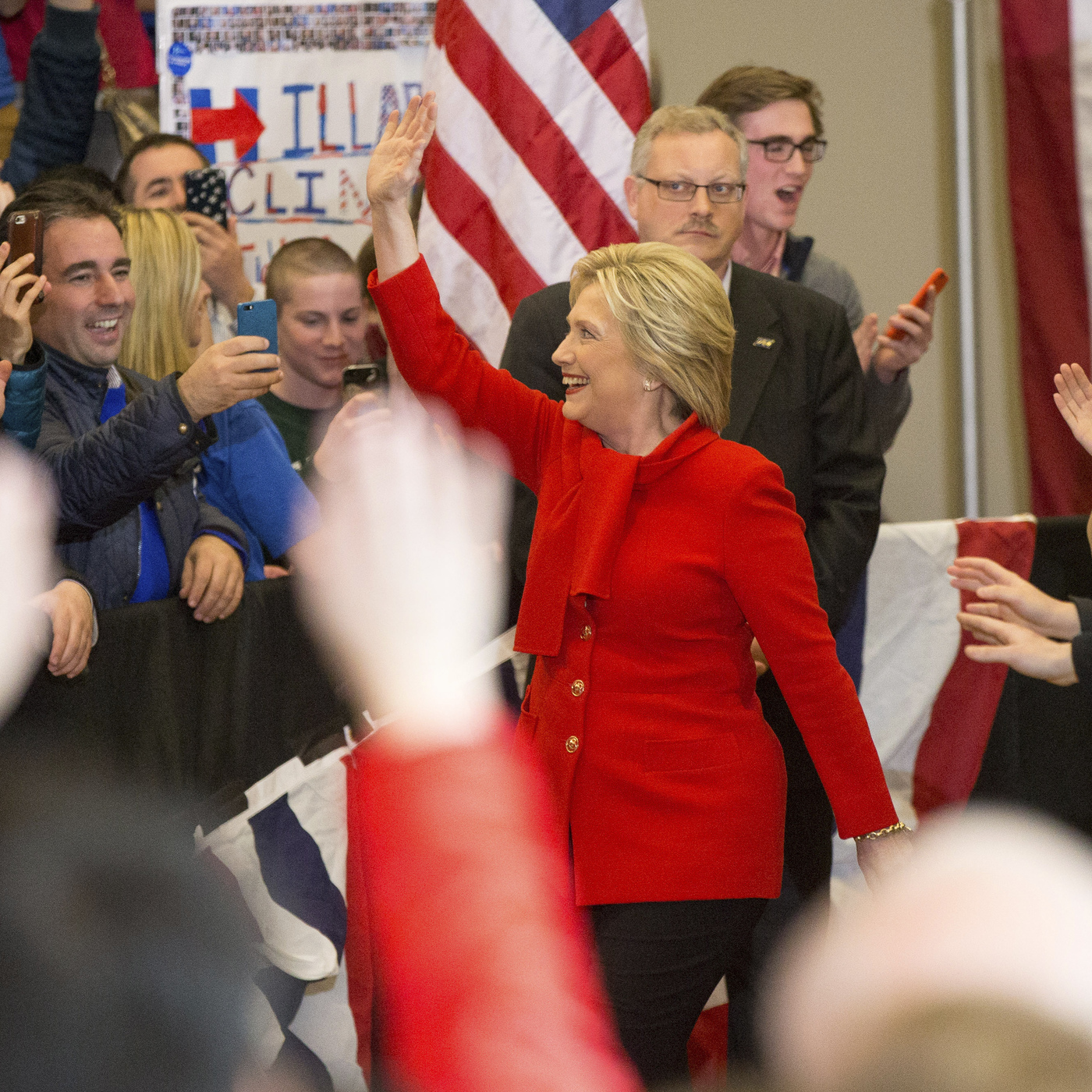 On the Democratic side, the Iowa Democratic Party declared Clinton the winner, but her margin of victory was exquisitely narrow. The IDP said Clinton received 699.57 state delegate equivalents, to Sanders' 695.49. There are currently 2.28 delegate equivalents still outstanding, not enough for Sanders to make up the difference. There is no mechanism for a recount.

In a microcosm of the state, tiny Calhoun County split its vote 200 to 200 for a perfect tie.

In a move reminiscent of her husband Bill's 1992 campaign for president, Clinton took the stage at 11:30 p.m. Iowa time, speaking of "a great sigh of relief" but not really claiming victory. (That would come in a campaign statement hours later.) Clinton also seized more attention by coming out to speak before Cruz had finished his victory speech, knocking him off television.

Sanders followed not long after with a speech of his own, also not claiming outright victory but glorying in how far his quixotic campaign had come.

Once again, Iowa's process proved the undoing of lesser candidacies that had hoped for a miracle. Before the votes had been tallied, Martin O'Malley had announced he was suspending his bid for the Democratic nomination. The former Maryland governor had notable moments in some of the debates with Clinton and Sanders, but he never moved the needle in Iowa or nationally.

Not long thereafter, Huckabee also suspended his long-shot campaign, which at times seemed more an exercise in nostalgia than a realistic bid for office. Also on life support after anemic showings were the other candidates who have appeared in the so-called "undercard" portion of the Republican debates: Jim Gilmore, Rick Santorum and Carly Fiorina. Santorum promptly announced he would campaign in every county of South Carolina, and Fiorina's campaign said she had "a 50-state strategy."

Hoping to reverse their fortunes were Jeb Bush, John Kasich, Rand Paul and Chris Christie, all of whom had focused more on New Hampshire than Iowa. But at this point, all four must contend not only with each other, but with a Rubio campaign that suddenly seems the best hope of those bent on stopping Cruz and Trump.

Early in the evening, polls taken for a consortium of media organizations showed Trump and Clinton in charge. Both appeared headed toward relatively easy wins, in part because the record-high Republican turnout was thought to be driven largely by Trump and because older voters outnumbered younger ones among the Democrats.

While the early waves of entrance polls may have misdirected many observers, the characterizing of the voters did suggest a way to understand the actual results.

In the end, the unprecedented turnout among Republicans (roughly 50 percent more than the record set in 2012) was driven as much by the appeal of Trump's rivals as by Trump. But it did appear that age was the most important differentiating factor among Democrats. Sanders led Clinton by nearly 9 to 1 among voters under 30, while Clinton got two-thirds of the votes among those 65 and older.

The Clinton-Sanders vote was so close that less than a percentage point separated them. A spokesman for the Sanders campaign said the results were suspect because many of the precincts had not been properly staffed and supervised by the Iowa Democratic Party.

The Iowa Democratic Party said it was still receiving some results in the wee hours of the morning, but that reports of missing votes or other irregularities were not accurate.

It was not clear whether that complaint would be pursued beyond caucus night.