Larry changed my concept of what could be done on radio.

Friendship is an elusive thing. This week we tried to illustrate the bond between two guys who hang out -- for no obvious reason.

The smoker in the video is Larry Massett.

He's a long time independent radio producer and musician who lives in Cabin John, Maryland, not far from Washington, DC but hundreds of miles away in spirit.

The non-smoker is me.

I've known Larry since 1979. The first story we did together was about me trying to fix my own car. This was a funny idea because I can't even make my own toast.

Later, Larry and I sprung into action when we heard on the news that the State of Maryland was looking for a way to tone down its official song. They wanted to eliminate the lyric that says "Huzza! she spurns the Northern scum!" We wrote a version so harmless and banal that it could offend no one. It was about crabs and happy people.

These collaborations with Larry changed my concept of what could be done on radio. Instead of hard news and silly features they was another path; a shortcut to reality by way of bizarre humor and imagination. Larry went on to create many of these features for NPR and for other places.

The two of us also did stories from abroad in Nepal, Japan and China. 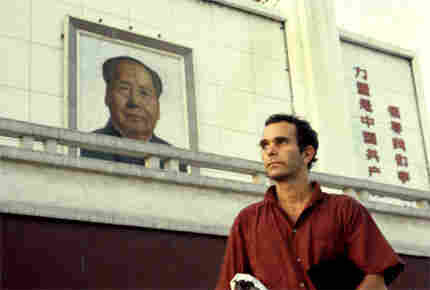 In the 1990s, we created "The Program That Never Was" -- a weekly series of conversations and skits with Amy Dickinson, Chris Mandra, Rebecca Flowers and the two of us. We taped them for several years. And, of course, they never found a radio home. But now, under the title "Chesty Morgan's Forbidden Love," they have a new life.