Accessibility links
Mastodons in Manhattan: A Botanical Puzzle : Krulwich Wonders... Those long, spiky thorns on Fifth Avenue trees are no accident, says one biologist. He suspects they evolved millions of years ago to protect the honey locusts from a very large pre-Manhattan predator: mastodons.

Next time you're on Fifth Avenue across from Rockefeller Center in New York City, look up at the honey locust trees. There's a bunch of them lining the avenue from 52nd Street down to TGI Friday's on 48th Street.

If you look closely, you will see long, spiky thorns projecting from the tree trunks, sometimes from the branches.

He and some other biologists suspect they evolved millions of years ago to protect these trees from a predator that liked to eat honey locust bark. The thorns are there to prick or pierce the tongue of a large animal. 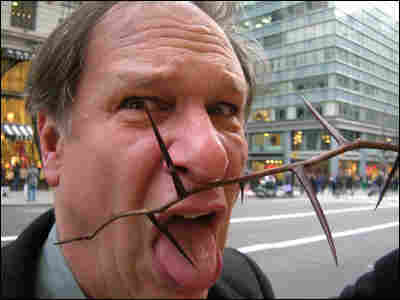 (That's me, demonstrating their effectiveness.)

What animal used to prowl around the New York metropolitan area munching bark?

Here's what they looked like, or here's the best approximation from Carl Buell, whose paintings of ancient animals appear at museums all over the world. The one pictured here is eating fruit not from a honey locust, but willow and spruce. 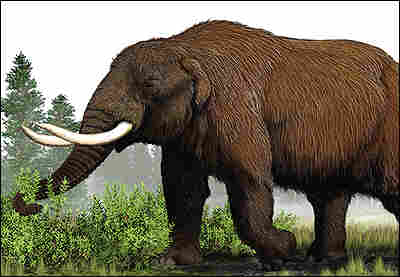 Robinson suspects those mastodons liked to eat bark. But trees with damaged bark often die, which is why honey locust trees developed thorns, to keep the mastodons away.

There hasn't been a mastodon in New York for at least 13,000 years, but the thorns are still there, waiting for the mastodons that will never come. That's his notion, and it's shared by several important scientists.

For one thing, mastodons were indeed New Yorkers. Mastodon fossils have been found in upper Manhattan at a construction site on Secrest Avenue and in swamps near the Manhattan-Bronx border. Mastodon teeth have shown up at dredging sites in New York harbor. Mastodons were very definitely in the area for millions of years.

For a second thing, honey locusts trees have been in the northeast for a very long period. The trees on today's Fifth Avenue are direct descendants of an old species, so mastodons and honey locusts were neighbors for a time. What's more, we know mastodons ate from a variety of trees, including spruce and pine. They weren't picky eaters, sometimes swallowing leaves, seeds and branches all at once. We know this because paleobiologists have examined mastodon feces, in fossilized form, and have found all kinds of tree fruits inside.

In Africa, acacias are regularly bothered by modern elephants, which feed on the tree's seedpods and then like to munch on Acacia bark. So, over the eons, the African tree has evolved spiky thorns to keep the elephants at bay.

Only thing is, our local elephants disappeared after the last ice age and are no longer a problem. But when a genetic trait takes millions of years to develop, it doesn't go away in a flash. Honey locusts may keep producing thorns for a long, long time.

To be fair, there is no direct evidence that mastodons actually ate honey locust bark. Someone now has to look carefully through the petrified mastodon feces samples stored at museums around the area and find honey locust fruit in the gut of a long-dead mastodon. Such a finding, as the lawyers say, would be persuasive. Robinson says he has access to a large mastodon sample, and with admirable enthusiasm, is planning to take a close look sometime soon.

Connie Barlow has written about this in her book, Ghosts of Evolution, Nonsensical Fruit, Missing Partners and Other Ecological Anachronisms, Basic Books, 2001