Accessibility links
India Cow Killer Bagged, but Deaths Continue : Krulwich Wonders... A few years ago, urban cows in Lucknow, India, began starving to death. They had plenty of garbage to graze on, but were getting skinnier. An inspection of sick cows revealed the problem, and a solution soon followed. So why are the cows still dying? 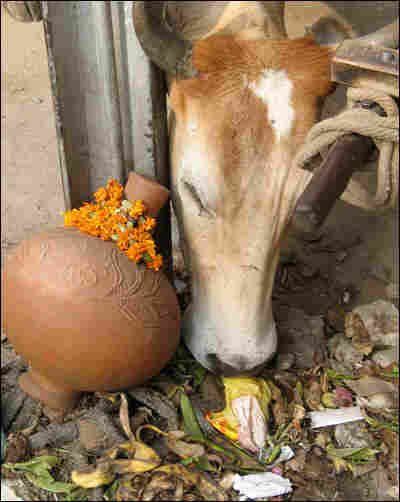 Cows in India's cities have been suffering from a strange malady.

Back in 2000, a senior police official in Lucknow, India, announced that cows in his city were mysteriously dying of some kind of new wasting disease. No one could explain why, but normally healthy cows were being released, as usual, into the city's streets to graze on garbage. Yet they were getting skinnier and weaker, and then dying of what appeared to be starvation.

They were eating and yet they were starving, said the police official. He wondered why.

A group of very ill cows was taken to a local veterinary hospital, anaesthetized and surgically examined. It turned out, says Indian journalist Subhash Mishra, that inside their stomachs was an extraordinary number of plastic bags. "More than 50, 60 bags," per cow, he recalls. 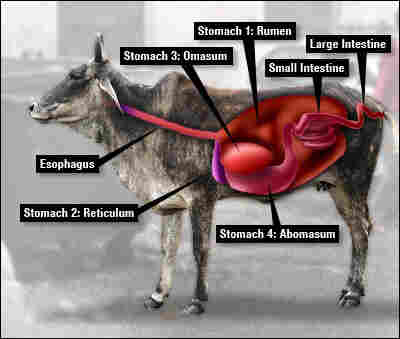 The bags, state authorities said, were gathering in the cows' stomachs — cows have four — to the point that food could no longer be absorbed and digested. In some of the sample cows, there were pounds of plastic engorged in their stomachs.

In a Hindu country, cows are sacred animals; whatever causes harm to a cow must be stopped. So in Lucknow, a movement to ban plastic bags began. The movement caught on. A bill was proposed in India's parliament. The plastics industry, naturally alarmed, proposed an alternate solution: Instead of banning plastic bags, why not require better, thicker plastic bags?

Thicker plastic bags weigh more and are more valuable to ragpickers — a caste of people in India who collect garbage.

A law was passed. But the plastics industry ignored the law and continued to make thin bags. 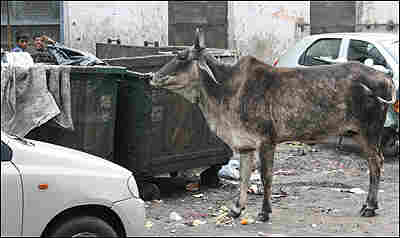 Around the country, stories were told of government officials and police officers trying to enforce the thicker bag rule, by going through stores with an instrument that weighed the thickness of plastic bags in microns. The ruling deemed that any bag 20 microns or less was banned. But how could shopkeepers distinguish a 20-micron bag from a 21-micron bag?

And so, like everywhere else in the world, you discover that what people say is one thing — but what they do is often something different.