Accessibility links
'Hey I'm Dead!' The Story Of The Very Lively Ant : Krulwich Wonders... How do ants know when another ant is dead? Play a little trick on them by creating an artificial corpse — a zombie ant from the living dead. What did the most eminent ant scholar find out? Hint: It stinks!

Here's a question — not one that's on everybody's lips, granted — but a question nonetheless: How do ants know when another ant is dead? E.O. Wilson, now the most celebrated, most eminent ant scholar in the world, wanted to know. 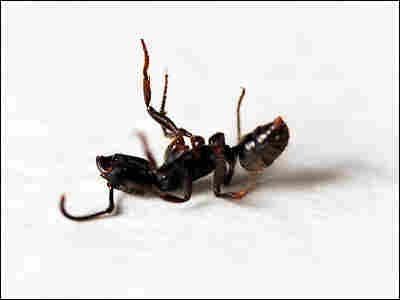 Am I dead? iStockphoto.com hide caption

When Ed Wilson was a young assistant professor at Harvard in the 1950s, he observed that when ants die — and if they're not crushed and torn apart — they just lie there, sometimes upside down, feet in the air, while their sister ants (almost all ants in a colony are ladies) walk right by without a glance. That is until about two days after an ant's passing, Ed discovered, when the corpse appears to emit a chemical signal that changes the living ants' behavior dramatically. 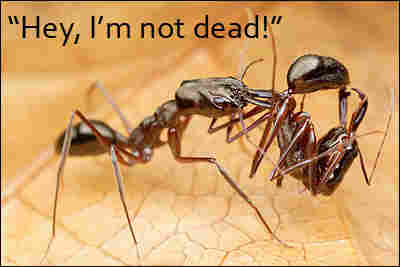 All of a sudden what was once a pile of gunk on the colony floor becomes a "Problem to Be Solved." Once the signal is in the air, any ant that happens by grabs the corpse and carries it through the colony to a refuse pile designated the graveyard and dumps it on a mound of also-dead ants.

Ed, who would revolutionize the study of ants by exploring their ability to communicate with smell, decided to figure out what chemicals equal "I am dead" to an ant.

In his autobiography, Naturalist, he wrote: "I thought, maybe with the right chemicals I could create an artificial corpse."

In our broadcast on All Things Considered, Ed describes how he researched the likely chemical constituents of "I am dead."

"They included skatole, a component of feces; trimethylamine, one of the essences of rotting fish; and several of the more pungent fatty acids that contribute to rancid human body odor," Ed says. "For weeks, my laboratory smelled like the combined essences of sewer, garbage dump and locker room." 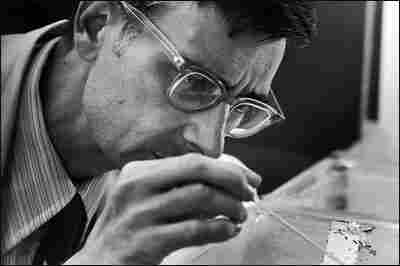 Finally, after much sifting and mixing, Ed discovered that oleic acid — just a teeny drop of it — was all the ants had to sniff to think "DEAD!" And, because he could — Ed had a colony parked in his Harvard lab so he could watch them endlessly — one day he took a drop of the chemical and gently deposited it on an ant that had the misfortune of walking by.

That poor ant is the main subject of our radio story. (Click the listen button above.) Ed describes how as soon as he dabbed the ant, the next ant that came near grabbed his ant, slung it on its back, hiked over to the graveyard and though the ant was very much alive — "kicking, you know," says Ed — flung it onto the refuse pile.

Dead is what you smell — not what you see — if you are an ant. So, though it tried to clean itself over and over, the minute it returned to the colony, it was grabbed, carried and slung back on the pile.

"Didn't you take pity?" I asked Ed. "You started it! Didn't you give it a shower or something?"

"No, I was trying to see if I could create the 'Living Dead,'" he says, while making zombie motions with his head and hands. He confesses that it took the ant "roughly an hour or two" to get clean enough to return to regular business.

Yes, Ed was naughty, and yes he had a wonderful time offending all the folks on his floor in the biology department. But what Ed was discovering is that most organisms on Earth do not communicate by sight and sound. He was among the first to realize that an enormous number of creatures — ants included — share information by taste and smell, even if those smells are what technological sophisticates would call "yucky."