Accessibility links
The Secret Advantage Of Being Short : Krulwich Wonders... If someone touches your toe and nose at the same time, you feel it simultaneously; but really the signal from your nose reaches your brain before the signal from your toe. This could mean that short people experience things faster than tall people.

Take a look at Abe Lincoln, particularly this version, and what do you see?

And it's good to be tall.

But, says neuroscientist David Eagleman, there is one possible, ever-so-slight drawback.

Eagleman can imagine situations where tall people experience the world a little later than short people.

If 6-foot-4-inch Abraham Lincoln and a 5-foot-2-inch person were standing side by side, Eagleman thinks he could demonstrate that "now" might come a teensy bit later for Abe than for the shorter person.

We conduct this sensory experiment in our broadcast on NPR's All Things Considered (click the "Listen" button above), and you can also think about it like this:

If you think about that, you might wonder: How come I didn't hear two snaps? After all, the sound entered your left ear right away and had to travel around your head into the right ear (which must have taken a little time). So your right ear heard it a little later, and yet it registered as one simultaneous event.

This is what Eagleman calls "temporal binding": The brain manages to synchronize what's happening even though sensory data comes through your eyes, ears, tongue and skin at slightly different times and speeds. Because the snap arrived more quickly at the left ear than the right ear, the brain had to edit the difference to give you a feeling of simultaneity.

"How is the resolution so precise, given that the signals are so smeared out in space and time?" Eagleman asks.

Making Sense Of A Sensory Delay

"It may be," he proposes in his essay "Brain Time," that "if the brain wants to get events correct time-wise, it may have only one choice — wait for the slowest information to arrive:

"To accomplish this, [the brain] must wait about a tenth of a second. In the early days of television broadcasting, engineers worried about the problem of keeping audio and video signals synchronized. Then they accidentally discovered that they had around a hundred milliseconds of slop, and as long as the signals arrived within this window, viewers' brains would automatically resynchronize the signals.

"This brief waiting period allows the visual system to discount the various delays imposed by the early stages; however, it has the disadvantage of pushing perception into the past. There is a distinct survival advantage to operating as close to the present as possible; an animal does not want to live too far in the past. Therefore, the tenth of a second window may be the smallest delay that allows higher areas of the brain to account for the delays created in the first stages of the system while still operating near the borders of the present."

It may be that our sensory perception of the world has to wait for the slowest piece of information to arrive, Eagleman says.

"Given conduction times along limbs, this leads to the bizarre but testable suggestion that tall people may live further in the past than short people."

What a strange idea!

For Tall People, 'Now' Is Really The Past 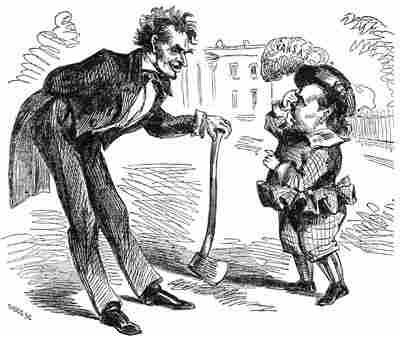 Because for the taller person it takes a tenth of a second longer for the toe-touch to travel up the foot, the ankle, the calf, the thigh, the backbone to the brain, the brain waits that extra beat to announce a "NOW!" That tall person will live his sensory life on a teeny delay (at least as regards toe-touching). This, of course, could apply to all kinds of lower-extremity experiences — cold or heat against the skin, tickles, rubs, hitting a soccer ball — the list goes on and on.

Randy Newman's observation that "short people have no reason to live" must be wrong then, because, if Eagleman is right, when it comes to sensory experience, especially down where you wear your socks, short people suddenly have bragging rights.

Eagleman's essay, "Brain Time," appears in a new anthology called What's Next?: Dispatches on the Future of Science from Random House Inc., edited by Max Brockman, to be published at the end of May.