Accessibility links
Bee Vs. Car: Who Gets More Miles Per Gallon? : Krulwich Wonders... So Volkswagen has this new concept car — give it two gallons of gas, and it will go 416 miles without a stop. But German engineers, meet your fuel-efficiency master: the honeybee.

Bee Vs. Car: Who Gets More Miles Per Gallon?

So Volkswagen has this new car – the prototype was shown at the Frankfurt Motor Show a few months ago – that will get an estimated 170 miles per gallon. 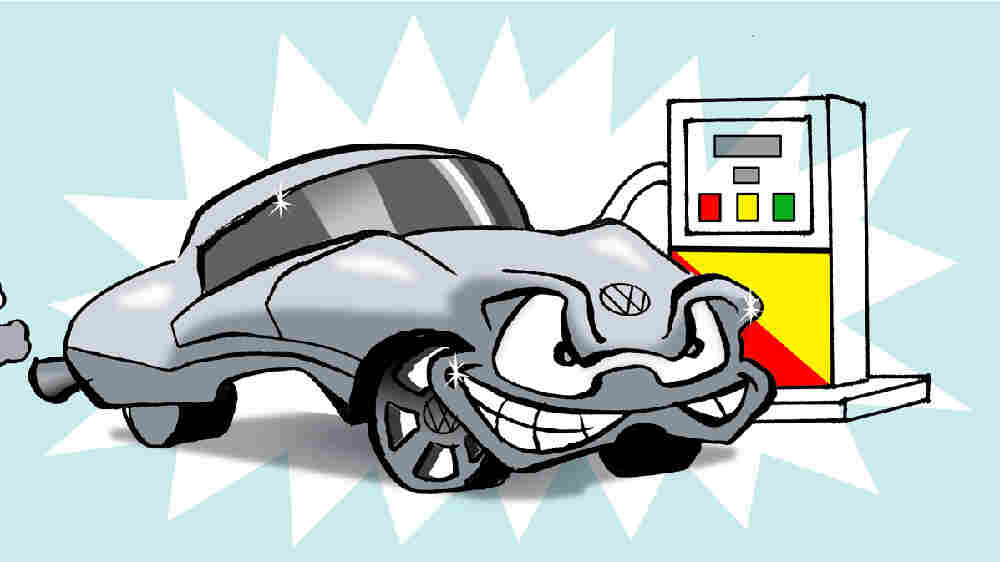 Give this car a drink of gas and it will go 416 miles without a stop!

The accomplishment here is a diesel engine that's small and powerful, and set in a very light frame. The "L1," as it's called, is very little, weighing approximately 837 pounds with a 2.6-gallon fuel tank.

German engineers were justly proud. This is, the company claims, a level of fuel efficiency never seen before in the auto world.

But that's just for cars. We suggest that Germany's proud engineers take picnic baskets to the nearest springtime hill and meet their energy-efficient masters: honeybees.

We don't mean super-bees or some mutant variety. It turns out an ordinary honeybee can convert fuel with an efficiency that should intrigue (and humble) the wizards at Volkswagen. 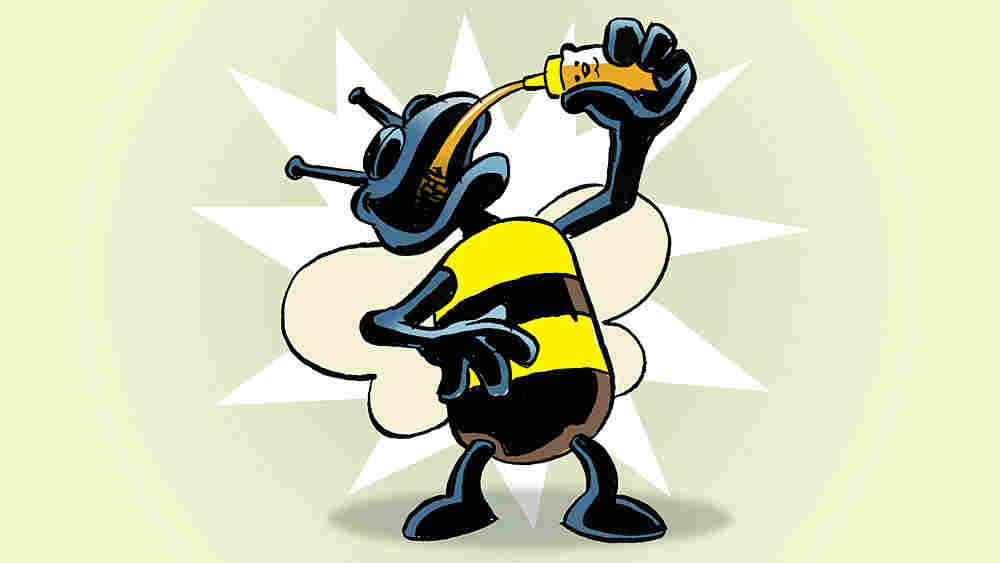 In 1957, Canadian scientist Brian Hocking wondered, how far could a bee travel on a gallon of honey? Bees are too small to carry a gallon of anything, but Hocking came up with a way to calculate Bee Miles Per Gallon.

Experimenters take a bee, give it all the honey it can eat and then tether it to a pole. (This neither harms nor seems to disturb the bee.) It then flies round and round until, basically, it runs out of fuel. The pole measures the distance flown by the rotating bee. Because the experimenter now knows how far a bee can travel on a bee-belly of fuel, you scale up to imagine how far it would go if it had a gallon-sized belly. That's how you calculate Bee Miles Per Gallon.

Because Hocking is no longer alive, we took his data and invited Arizona bee scholar Stephen Buchmann to recreate the experiment.

Buchmann calls bees "the ultimate hybrid mini-vehicles." He says millions of years of evolution have produced muscles across the animal kingdom that are consistently more energy efficient than even the best human-built machines. But until he came across Hocking's data, he had no idea how much more efficient.

In the case of our bee, Buchmann used a tried-and-true formula, tested by Hocking, and his bee forefather, insect physiologist Karl Crailsheim:

Flight Efficiency of a Bee = 0.5 mg Per 1 Kilometer

Buchmann concluded that on one sip of honey, our bee could fly continuously for approximately 8 kilometers; on a full stomach of honey, a bee could go 64 kilometers. And when he scaled up bee fuel intake to a gallon, he came up with an astonishing number. Stand back ... 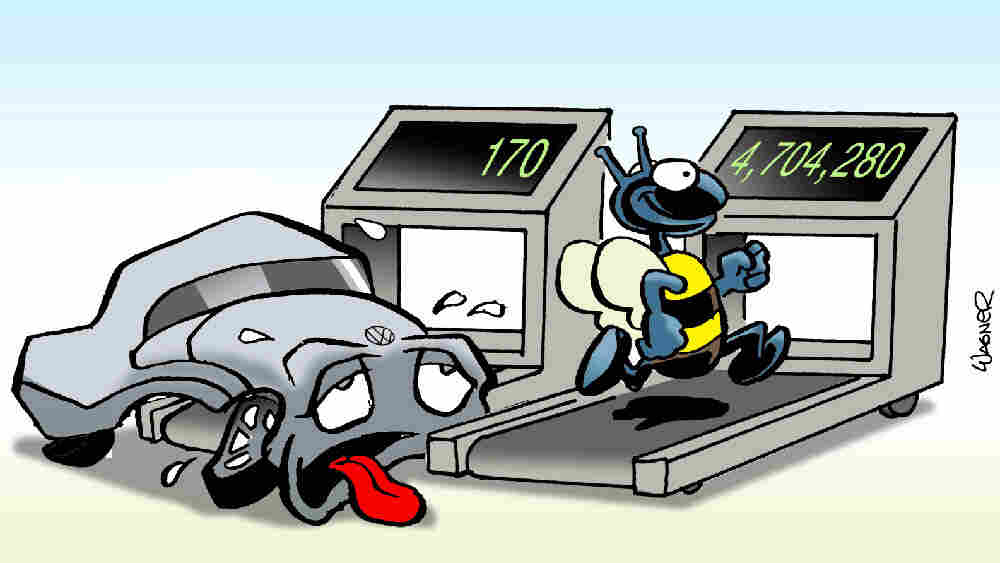 That's a whole lot better than the Volkswagen.

"I was expecting something big, but not something quite so [Carl] Saganesque," Buchmann said.

In our interview on Morning Edition, I asked if we are just playing with numbers here. Does the bee get that mileage because it is so small? Is this just a scaling trick? Or is it because a bee is just a more efficient transportation vehicle?

"We are playing with the numbers a little bit in terms of the scaling factors," he said. "But that does not negate the fact that honeybees are super, super efficient, far more efficient than any kind of internal combustion engine that human engineers have ever devised. So yes, we're cheating a little bit, but if you want to think in terms of miles per gallon, no denying it: We [he means the bee] got almost 5 million miles per gallon. Pretty darn impressive." 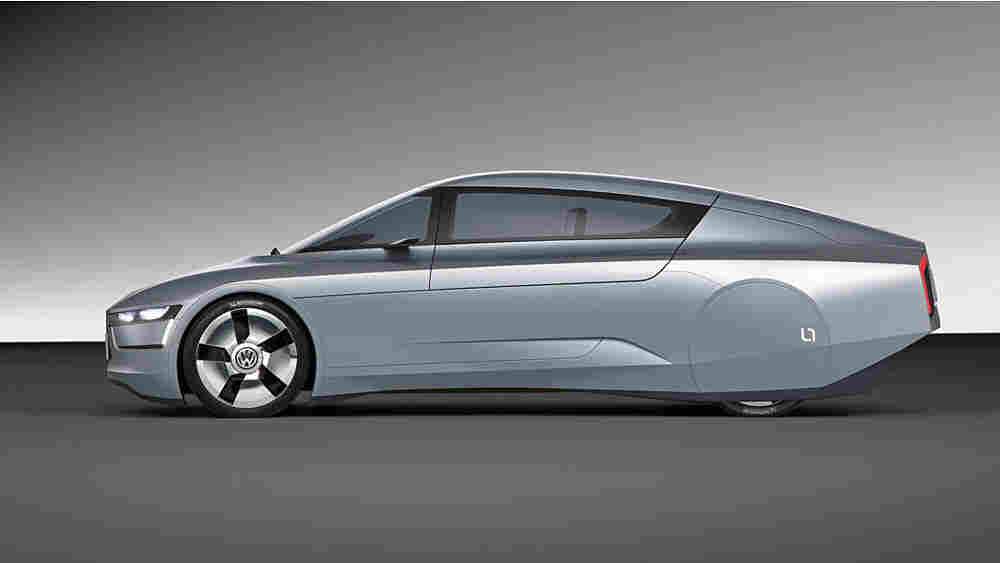 We just thought the folks at Volkswagen should know.

Special thanks to Neil Wagner for his bee and VW cartoons. And to entomologist May Berenbaum at the University of Illinois for alerting me to this story. And should you wish to hear Buchmann do his calculations with help (it's almost a duet) with bluesman Muddy Waters singing "Sail on, my little honeybee," just hit the "listen" button at the top of this page.