Accessibility links
A Very Scary Fireworks Show: Exploding H-Bombs In Space : Krulwich Wonders... Back in 1962, the U.S. blew up a hydrogen bomb, creating what might be the greatest fireworks spectacular ever. People in Hawaii gathered on rooftops, sipping drinks, as they watched a radioactive rainbow display in the night sky.

Since we're coming up on the Fourth of July, and towns everywhere are preparing their better-than-ever fireworks spectaculars, we would like to offer this humbling bit of history. Back in the summer of 1962, the U.S. blew up a hydrogen bomb in outer space, some 250 miles above the Pacific Ocean. It was a weapons test, but one that created a man-made light show that has never been equaled — and hopefully never will. Here it is:

Some of the images in this video were until recently top secret. Peter Kuran of Visual Concept Entertainment collected them for his documentary Nukes In Space.

If you are wondering why anybody would deliberately detonate an H-bomb in space, the answer comes from a conversation we had with science historian James Fleming of Colby College.

"Well, I think a good entry point to the story is May 1, 1958, when James Van Allen, the space scientist, stands in front of the National Academy in Washington, D.C., and announces that they've just discovered something new about the planet," he told us.

Van Allen described how the Earth is surrounded by belts of high-energy particles — mainly protons and electrons — that are held in place by the magnetic fields. 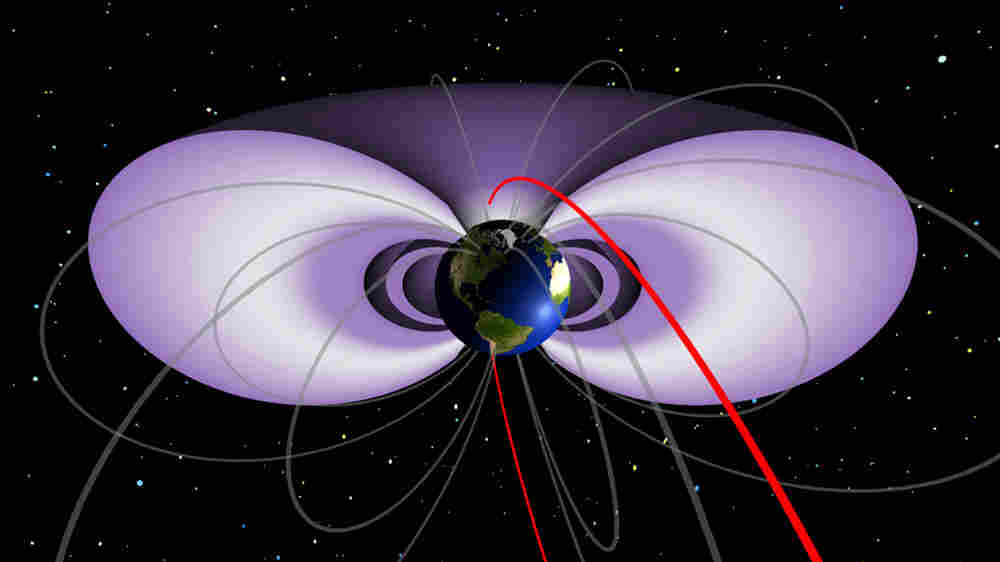 There are two Van Allen radiation belts that circle the Earth (shown here in purple): an inner belt and an outer belt. The belts are contained by the Earth’s magnetic field (pictured as gray lines). Red marks a radiation-safe orbit path for satellites. NASA hide caption

Today these radiation belts are called Van Allen belts. Now comes the surprise: While looking through the Van Allen papers at the University of Iowa to prepare a Van Allen biography, Fleming discovered "that [the] very same day after the press conference, [Van Allen] agreed with the military to get involved with a project to set off atomic bombs in the magnetosphere to see if they could disrupt it."

To understand where the colors come from in Starfish Prime, you first have to know a little bit about Earth's atmosphere. Nitrogen and oxygen are the two most abundant gases in our air. The concentration of each gas is different depending on the altitude.

When Starfish Prime detonated, charged particles — electrons — were released from the explosion. According to NASA astrophysicist David Sibeck, those particles came streaming down through the Earth's atmosphere, energizing oxygen and nitrogen atoms, causing them to glow in different colors.

As electrons collide with the atoms, energy is transferred to the atoms. After holding onto it for a moment, the excess energy is released as light. When many excited atoms release energy together, the light is visible to the naked eye. Depending on the type of atom and the number of atoms, you get different colors.

It's similar to what causes the aurora borealis, although those electrons are coming from the solar wind pounding into Earth. The electrons first encounter a high concentration of oxygen at the upper reaches of Earth's atmosphere, causing the atoms to release a red light. Then green appears as the electrons travel to lower altitudes where there are fewer oxygen atoms. Even lower, where more nitrogen atoms are present, the collisions throw off a blue light.

But in the Starfish Prime explosion, charged particles went in every direction. That's why you see the sky filled with a rainbow of colors nearly all at once in the footage. — Meagen Voss

Discover It, Then Blow It Up

The plan was to send rockets hundreds of miles up, higher than the Earth's atmosphere, and then detonate nuclear weapons to see: a) If a bomb's radiation would make it harder to see what was up there (like incoming Russian missiles!); b) If an explosion would do any damage to objects nearby; c) If the Van Allen belts would move a blast down the bands to an earthly target (Moscow! for example); and — most peculiar — d) if a man-made explosion might "alter" the natural shape of the belts.

The scientific basis for these proposals is not clear. Fleming is trying to figure out if Van Allen had any theoretical reason to suppose the military could use the Van Allen belts to attack a hostile nation. He supposes that at the height of the Cold War, the most pressing argument for a military experiment was, "if we don't do it, the Russians will." And, indeed, the Russians did test atomic bombs and hydrogen bombs in space.

In any case, says the science history professor, "this is the first occasion I've ever discovered where someone discovered something and immediately decided to blow it up."

The Americans launched their first atomic nuclear tests above the Earth's atmosphere in 1958. Atom bombs had little effect on the magnetosphere, but the hydrogen bomb of July 9, 1962, did. Code-named "Starfish Prime" by the military, it literally created an artificial extension of the Van Allen belts that could be seen across the Pacific Ocean, from Hawaii to New Zealand.

In Honolulu, the explosions were front page news. "N-Blast Tonight May Be Dazzling: Good View Likely," said the Honolulu Advertiser. Hotels held what they called "Rainbow Bomb Parties" on rooftops and verandas. When the bomb burst, people told of blackouts and strange electrical malfunctions, like garage doors opening and closing on their own. But the big show was in the sky.

To hear eyewitness accounts of what it looked like, listen to our broadcast on All Things Considered by clicking the Listen button on the top of this page.