Accessibility links
The Junkman And The Madonna : Krulwich Wonders... Now that it's nearly fall and there is a hint again of things passing, I think about a wistful boy who once looked out a window and froze a junkman in time.

The Junkman And The Madonna

The Junkman And The Madonna 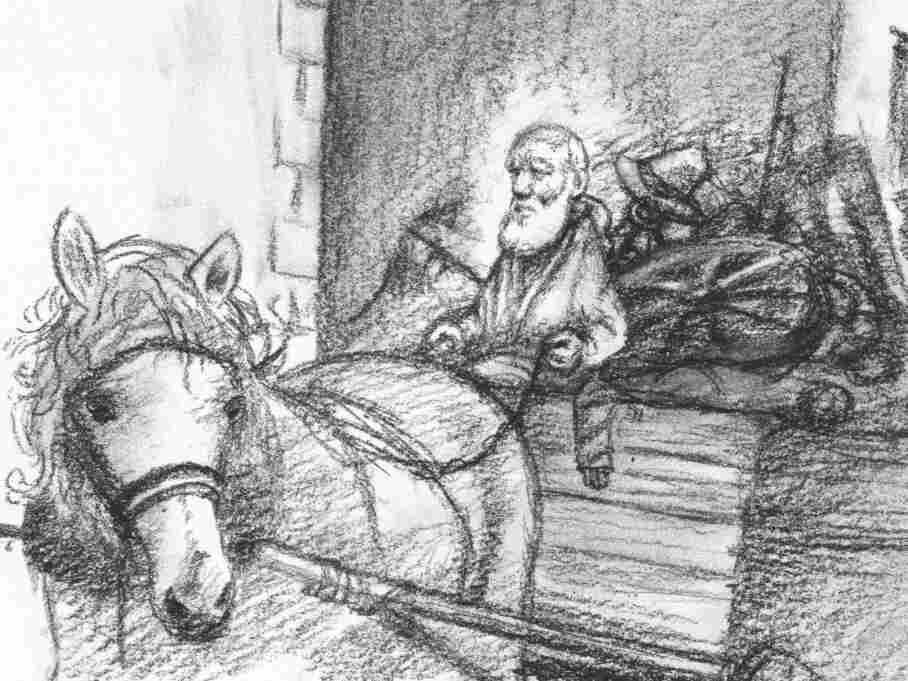 Now that it's almost fall and there is a hint again of things passing, I think about a boy who once looked out a window, and wistful about time slipping by, he made it stop. Yes, he stopped time.

I love this story. It was told by Loren Eiseley, an anthropologist and one of my favorite science writers.  Eiseley grew up in Nebraska and one day, when he was in high school, he happened to glance out the window and saw a junkman heading up a city street.

In 1923, junkmen collected potentially valuable garbage and hauled it off for resale. This particular junkman, Eiseley wrote, had "a broken old horse plodding before a cart laden with bags of cast-off clothing, discarded furniture and abandoned metal. The horse's harness was a makeshift combination of straps mended with rope. The bearded man perched high in the driver's seat looked as though he had been compounded from the assorted junk heap in the wagon bed."

A few moments later, when the junkman and his wagon were about to round a corner at the intersection of R and 14th streets, Loren says he "leaned from a high school window a block away, absorbed as only a sixteen year old may sometimes be with the sudden discovery of time. It is all going, I thought with the bitter desperation of the young confronting history. No one can hold us. Each and all, we are riding into the dark."

That is when he stopped the world.

"I had thought instantly, now, save him, immortalize the unseizable moment. The junkman is the symbol of all that is going or is gone. He is passing the intersection into nothingness. Say to the mind, 'Hold him, do not forget.'"

And so he snapped an image in his head, and froze the junkman in place just before he went out of sight.

Forty-six years later, when he wrote his essay, Eiseley supposed "the man on the wagon is dead, his cargo disbursed, never to be reassembled. The plodding beast has been overtaken by whatever fate comes upon a junkman's horse." But in his mind the junkman was still turning onto R Street, held in mid-turn, "prevented from departing".

"The power to free him is not mine," Eiseley wrote. "He is held enchanted because long ago I willed a miniature of history, confined to a single brain." As long as Eiseley's heart kept beating, as long as oxygen kept flowing to his neurons, that junkman would stay frozen.  Such is the power of mind.

Until Loren Eiseley died in 1977. At that moment, one imagines, the junkman was released and allowed to fade away, in effect completing his long delayed escape onto R Street, except for the inconvenient fact that he had  slipped from Eiseley's brain onto a page, then to a book, then to many books, then to my mind and now into yours.

That poor junkman. His escape has been thwarted so many times that he may be stuck mid-turn for centuries. Such is the power of a good story.

Oh, And One More Thing…

Eiseley's frozen image of the junkman  reminds me of  this observation from neuroscientist David  Eagleman: "There are three deaths. The first is when the body ceases to function. The second is when the body is consigned to the grave. The third is that moment, sometime in the future, when your name is spoken for the last time."

The stories children tell about their grandparents, great-grandparents keep those people  glimmering, if only for a few generations. Then, like almost all of us, they wink into oblivion.

But, every so often someone comes along, a Loren Eiseley, or more emphatically, a Leonardo, and he decides to paint a picture of  lady, the wife of a merchant  in his town, Francesco del Giocondo. He paints the painting. At the Louvre, it is called Portrait of Lisa Gherardini and magically that lady – who lived modestly in the 1500s -- escapes her  third death because we still talk about her.

We don't call her by her full name any more. Mona, I have read, is a contraction of "Madonna", similar to Ma'am, or M'lady in English. In modern Italian the short form of Madonna is typically spelled Monna. But she's still "Lisa" and I think that counts.

So by Dr. Eagleman's definition, she is not dead yet. Not even close.

The junkman… with no name, he is, I suppose, much closer to gone.