Accessibility links
Migration Blues: When Birds Don't Fly South : Krulwich Wonders... This little bird has a tale of migration woe that's common to many animals around the world. But one leg of its broken journey seems to have been repaired.

It's fall, time to head south, leave here, go there. Time to migrate. How do animals know when, where and how to go?

The usual explanation is that the trip is driven by instinct, hard-wired into every migrating animal and sculpted by an ancient logic. Something, perhaps, like this intricate motor created by the artist Arthur Ganson, a sculptor who builds elegant little devices that spin, pump and pull themselves into poetry.

Well, that's one way to think about migration. And while Arthur didn't build his forest of pipes and pulleys to explain why birds fly south in the fall, he's given new meaning to the term "hard- wired". By the way, if you liked what you saw here -- there are more Arthur Ganson machine videos here. In our version we added a score from composer Danny Madorsky who spends his winters north, where the winds blow through Harlem, but I digress...

No question migrating birds are answering a command of nature, but now the bad news: There is growing evidence that the wiring is off; the system is breaking down.

"Simply stated," says Princeton professor David Wilcove, "the phenomenon of migration is disappearing around the world. The great salmon runs of the Pacific Northwest have been reduced to a trickle ... Monarch butterflies are threatened by illegal logging of the Mexican forests where they winter. "

More and more studies show fewer creatures are migrating and those who do more often don't make it.  There is no easy way to address this problem. 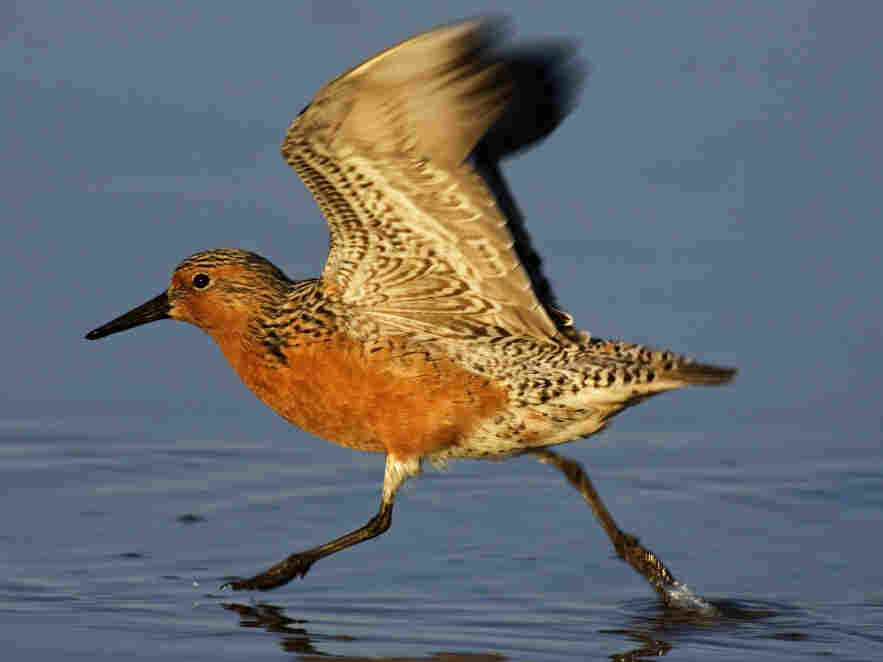 In his book No Way Home, Wilcove tells the story of a little shore bird called a red knot.

Knots are robin-sized sandpipers that spend their summers nesting and breeding in the Arctic. Come fall, these birds  then head down to different winter spots around the world, including Tierra del Fuego in Argentina. That's an 18,000 mile trip. "So demanding is the journey," writes Wilcove, "that the knots actually shrink the size of their intestines and other internal organs during the migratory period in order to reduce their flying weight."

"Why the sudden drop in numbers?" asks Wilcove. "Biologists found no evidence of any dramatic changes on either the breeding or wintering grounds.  Hunting was not a major issue. Nor were there any indications of a sudden disease outbreak. Weather conditions during the migratory period seemed more or less normal."

The problem, it turned out, popped up in the middle of the knots' trip: at a stopover site in Maryland, at Delaware Bay.

Birds don't fly non-stop. They pause to rest. When they catch a nap, a meal, or a few days off, they become vulnerable to predators, to hunger. The more places they visit the harder it is to protect them.  Wilcove describes how one migrating Swainson's thrush going from Manitoba down to its winter grounds in Brazil will pass through or over 10 different countries and more than 40 states, provinces, departments, and other major subnational jurisdictions. How to get all those different communities to pay attention? Not easy.

The Rest Of The Story

What happened to the red knot is bad news/better news story. Wilcove tells it as a spring time tale when the birds are heading north:

"Every year toward the end of May, virtually the entire population of Calidris canutus rufa [a kind of red knot] funnels into Delaware Bay to rest and eat. It's the last refeuling stop for the birds before they undertake the final leg of their migration, a fifteen hundred-mile sprint to their nesting grounds in the Canadian tundra. The knots arrive in Delaware Bay exhausted and depleted, each weighing about four and a half ounces. During the span of a couple of weeks, they must put on an additional one and two-thirds ounces of fat just to fly to Canada. Moreover, because the tundra may still be frozen when they arrive on their breeding grounds, preventing them from finding food, the knots will need some additional fat to sustain themselves for a few days until conditions improve. All told, then, they may have to increase their body weight by over 50 percent while in Delaware Bay.

"Their ability to go on a sustained eating binge while at the bay is due entirely to another creature: the horseshoe crab. These bizarre animals are among the oldest on Earth." 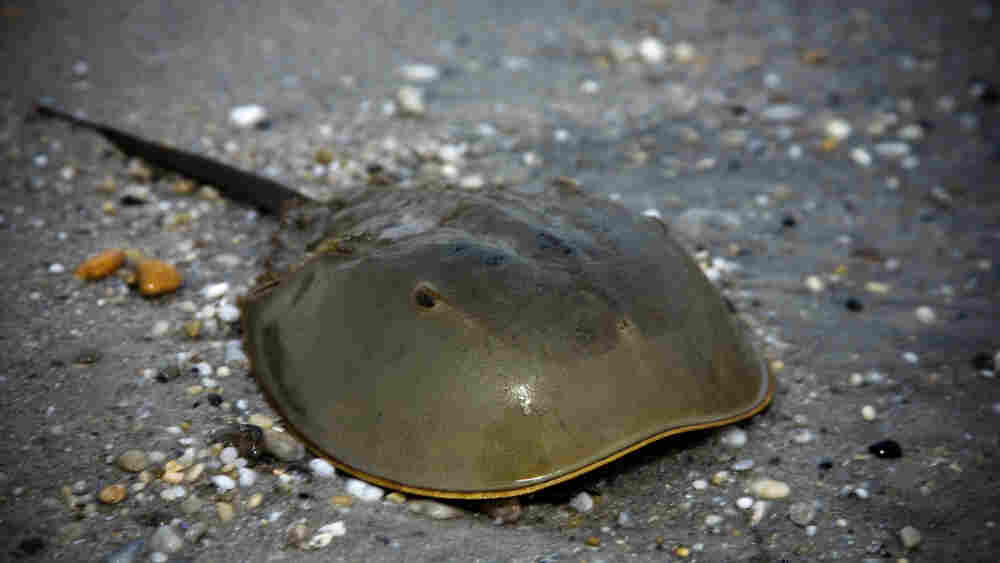 "Horseshoe crab fossils over 200 million years old are almost identical to contemporary animals: They are the closest living relatives of the trilobites. Each spring, millions of horseshoe crabs migrate from the waters of the continental shelf to the shallower waters of Delaware Bay to spawn. Males literally attach themselves to females (an arrangement known as amplexus), and the pairs then make their way to the sandy intertidal zone. Each female digs a shallow pit in the sand, where she lays tens of thousands of tiny, blue-green eggs, usually in clusters of a few thousand. Wave action and the digging of nearby horseshoe crabs disturb many of the egg clusters, bringing them closer to the surface. It is this ephemeral resource -- billions of eggs, some lying just beneath the surface of the sand, others churned up by the waves and deposited in long wrack lines on the shore -- that attracts hundreds of thousands of hungry gulls and sandpipers, including red knots. The result is an avian feeding frenzy that ranks as on of the greatest wildlife spectacles of North America.

"By trapping, marking, and weighing the knots, biologists have been able to piece together some alarming trends in Delaware Bay. [The knots, it turns out, aren't getting enough horseshoe crab eggs to eat.]

It's The Fishermen's Fault

"[After a 'Let's do some more studies' interval] state and federal authorities began to take action. They reduced the allowable harvest of horseshoe crabs, and they prohibited any harvest at all during the period when the shorebirds are visiting. As a consequence, the overall harvest of horseshoe crabs dropped by 62 percent between 1998 and 2003. The states of New Jersey and Delaware went even further: in 2006, they declared a two year moratorium on the harvest of all horseshoe crabs."

I wrote Wilcove to find out what happened. The horseshoe crab population has stopped crashing. It's even bounced back a little.  As for the birds, he writes, "The tally of knots in Delaware Bay was 15,000 in the spring of 2008, jumping to 24,000 in 2009."  That's huge. Too huge, Wilcove thinks. The 2010 tally isn't in, "but preliminary reports placed it at around 15,000 knots."  So whatever is going on, the knots aren't disappearing as fast as they used to.

So what do we make of all this? Wilcove seems to think the red knot population has stabilized. "As to whether they are increasing, that won't be known until we have a few more years of data."

The lesson here is that all over the world, habitat destruction, human predation, over-exploitation and climate change are threatening migrant animals, but every so often, however improbably, what's broken can be repaired … at least a little.