Accessibility links
Tangram! I Can't Stop Playing This Game : Krulwich Wonders... All over the world people have created sly, elegant, silly, mathematically curious combinations using only the original seven elements of tangram puzzles. And the possibilities are dazzling. 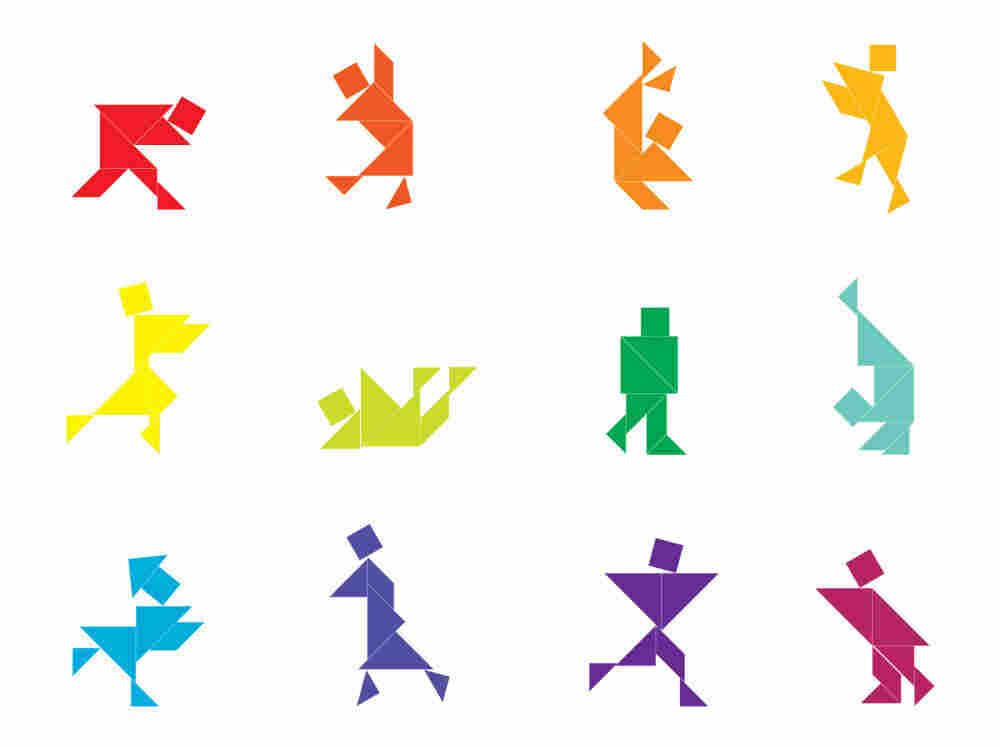 What we have here is the EverReady battery of puzzles. It just keeps going and going.

Each of these figures is built from the same 7 elements: two big triangles, two small triangles, one medium size triangle, a rhomboid and a square.

Put together differently, the same pieces would form a square.

All over the world people have created sly, elegant, silly, mathematically curious combinations using only the original 7 elements, no overlaps allowed. The possibilities are dazzling.

Just take a look at this video from Bolivia:

According to Alex Bellos in his new book on math Here's Looking at Euclid, the idea began as a banquet hall design problem.

The puzzle had originated with the Chinese tradition of arranging tables of different shapes for banquets. One Chinese book from the twelfth century showed 76 banquet placements, many of which were made to look like objects, such as a fluttering flag, a range of mountains and flowers. At the turn of the 19th century, a Chinese writer with the playful nickname Dim-Witted Recluse adapted this ceremonial choreography for finger-size geometrical blocks and put the figures in a book Pictures Using Seven Clever Pieces.

Originally called the Chinese Puzzle, the sets later gained the name tangram. The first book of tangram puzzles to be published outside of China was printed in London in 1817.

Immediately the book started a fad. ... It is hard to believe how engrossing the puzzle is before trying it out. In fact, though it looks easy, solving tangram problems can be surprisingly difficult. The shapes can easily deceive; for example, two similar-looking silhouettes may have totally different underlying structures. The tangram can serve as a warning against complacency, reminding you that the essence of objects may not always be what you first see. Take a look at the following tangram figures.

It looks as if a small triangle has been removed from the first to make the second. In fact, both figures use all the pieces and they are arranged in completely different ways.

From "Here's Looking at Euclid"

There are sites you can visit where you can spend hours pushing triangles into preformed silhouettes. There are clubs, videos, how-tos. I'm going to finish off with two more videos -- I can't help myself -- that show the range of possible play. The first one is conceived on a sidewalk; the Pavement Inspector is a tangram creature.

The second is a beautiful meditation on Asian courtship. In an elegant way, it's kinda hot.