Accessibility links
The Biggest Movie Monster Ever : Krulwich Wonders... Did you know that the Stay Puft Marshmallow Man from <em>Ghostbusters</em> is nearly 100 feet tall? A chart from Geekstir plots the height of great movie monstors, from Chucky to Godzilla. Who's the biggest of them all?

The Biggest Movie Monster Ever

The Biggest Movie Monster Ever 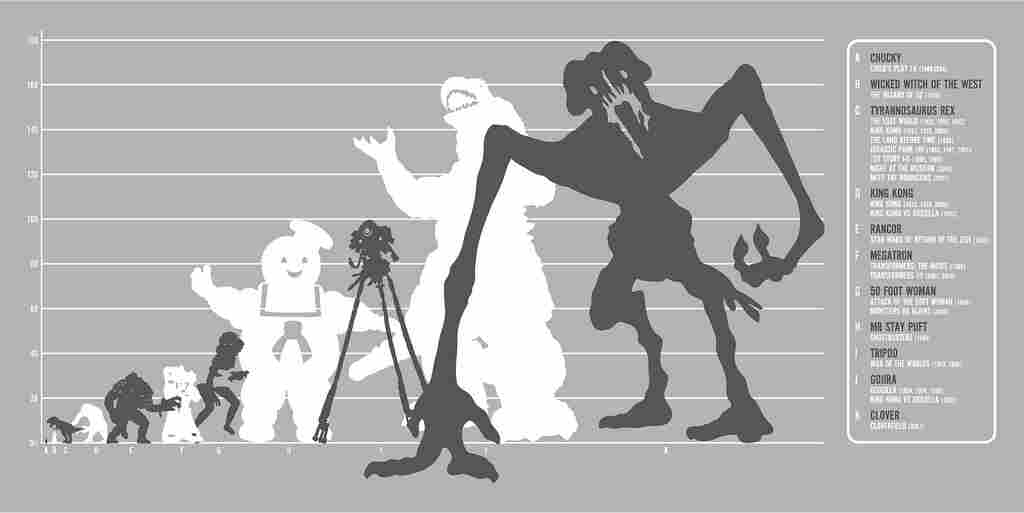 This chart was published last year by Geekstir, a site that caters to video/game/movie obsessives. It ranks movie monsters by size, starting with little axe-wielding Chucky, and bouncing up the villainy scale.

I had no idea Mr. Stay Puft from Ghostbusters was so huge (twinned with "Tripod" of War of the Worlds) but the Biggest of the Baddest is that thing that tries to eat Manhattan in the movie Cloverfield. It doesn’t have a name (On the chart they call it "Clover," but nobody in the movie called it that); it’s mostly limb and has these hideous teethlike fingers that it uses to...well, I couldn’t watch. Whatever it did with those fingers, I don’t want to know.