Accessibility links
Here Comes The Sun And I Say...'Uh Oh' : Krulwich Wonders... The sun goes through cycles. Quiet ones, then not-so-quiet. And one author says the next not-so-quiet phase "is expected to start sometime between 2010 and 2012."

The Sun goes through cycles. Quiet ones, then not-so-quiet. In his new book Chasing The Sun, Richard Cohen says the next not-so-quiet phase "is expected to start sometime between 2010 and 2012" which means our Sun will soon have a fit of extra-violent explosions that release more than a billion tons of matter into space at millions of miles per hour. These are called coronal mass ejections. There will be more of them. 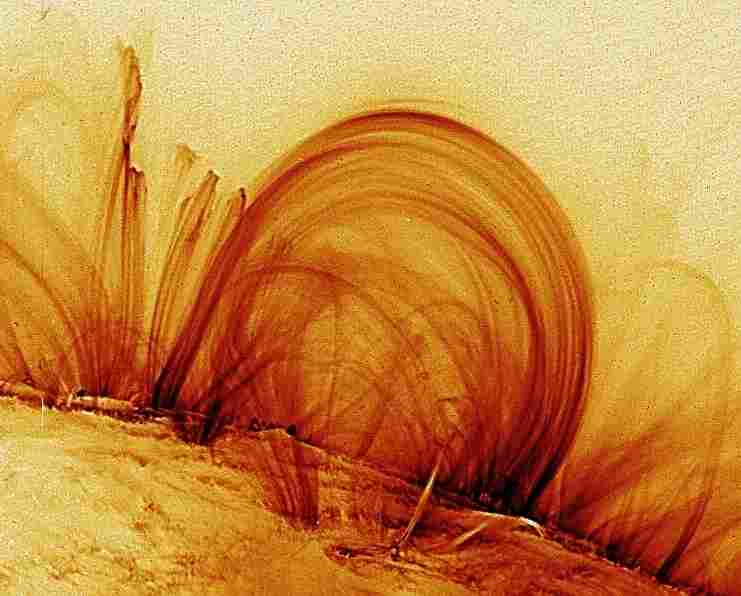 Enlarge this image
via pruned.blogspot.com 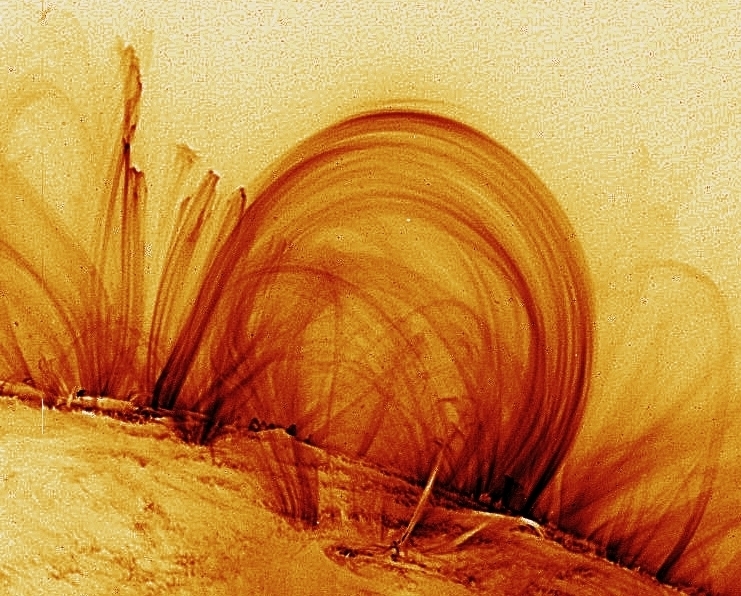 These loops of flame fly up tens of thousands of miles like rubber bands that stretch and twist until they break, flinging matter outward. NASA has released footage of one of these storms (and just to make this extra exciting I'm showing you NASA's ultraviolet version posted by Alexander Trevi of pruned.blogspot.com and Geoff Manaugh of BLDGBLOG.blogspot.com with help from a band called Main playing their "Haloform III"). Watch for the big solar blow -- it happens about half way through and comes roaring at the camera filling the frame with scratchy looking blades of light (photons, I suppose; or maybe just loose protons -- all I know is I felt like ducking). It ends with multiple explosions of fire-rings; all of this is going on 8 lightspeed minutes from where I sit.

To Octavio Paz from Alexander Trevi on Vimeo.

Where do these storms come from? 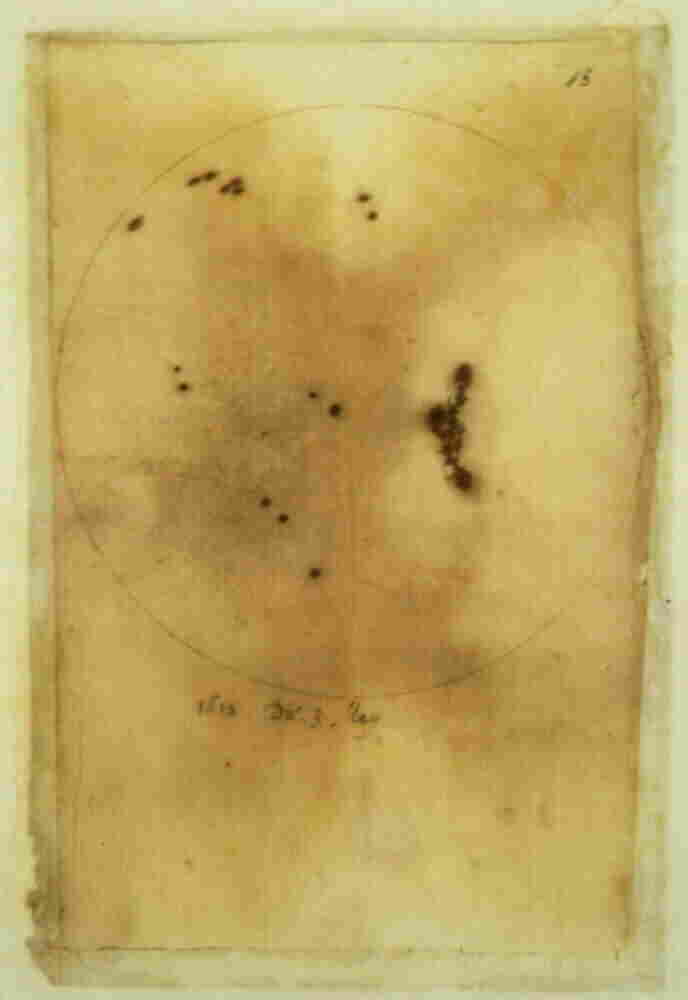 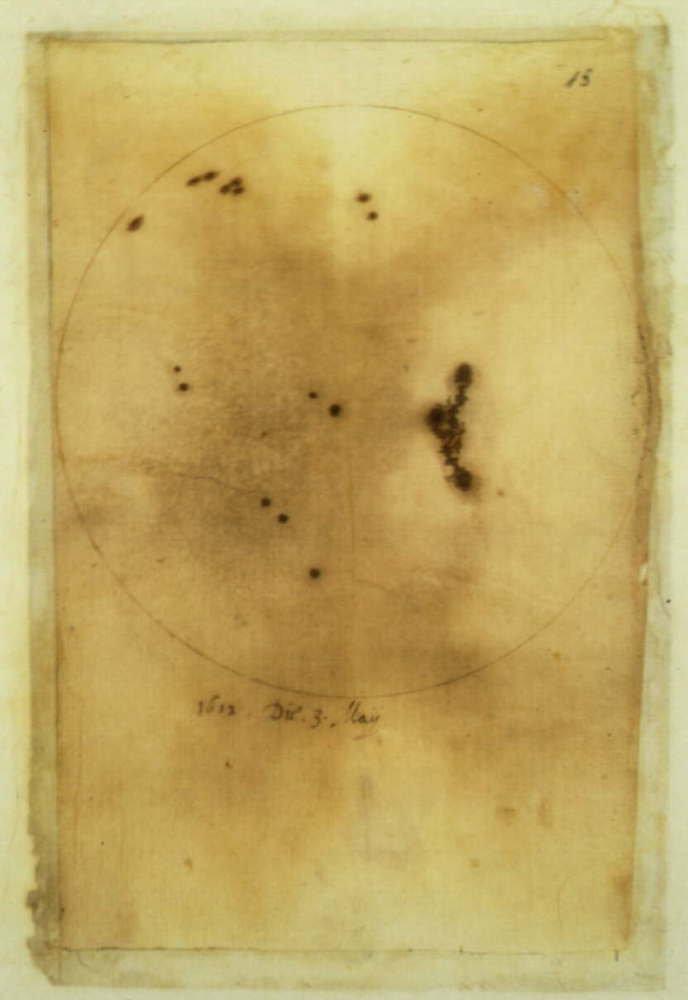 Richard Cohen says they have long been associated with the appearance of sunspots, those little dark blemishes that show up on the Sun's surface. Galileo was among the first to notice that sunspots appear in flurries. He watched them drift across the sun in June of 1613 (that's one of his drawings on the left; enlarge it to see how carefully he inked the spots in).

A few centuries later, in 1843, a pharmacist-turned-astronomer, Samuel Schwabe, discovered that sunspots seem to wax and wane in cycles. In 1976 astronomer John Eddy worked out the math so we now have a very rough calendar that tells us we may be about to enter our next "solar maximum." Should we care?

"There is now no doubt that sunspots can violently disrupt events on Earth," Cohen writes. Electricity gets knocked out. Power fails. But the more sensitive question, at least these days, is how sunspots affect global warming. Professor Eddy suggested more sunspots may be warm us up while fewer sunspots cool us down.

Climate records from 1645 to 1715 show that it got very cold in the northern hemisphere.

The Thames River in London froze solid. The Rhine froze for five weeks. Wine glasses froze at King Louis the 14th's banquet table. In the middle of this chill, astronomers all over the northern hemisphere (there were lots of them) noticed fewer sunspots than usual. For 30 of those years, they saw only about 50 sunspots, compared to 40,000 to 50,000 over the same period in modern times. The evidence suggested that when sunspots wane, the world gets cooler.

Wait! What Did I Just Say?

I know that seems upside down. Sunspots are black. They don't look like they produce light. So the more black spots on the sun, the colder we should be. When there are fewer spots, the sun looks brighter. Shouldn't we warm up when spots go down?

You might think that the Sun without acne would make it warmer on Earth because sunspots are dark, but the bright regions that surround them will more than compensate so the Sun Is actually dimmer in sunspot minimum.

Weird. But OK, if sunspots are about to multiply, that means we may be in for a solar warming on top of the warming caused by human activity. Not a pleasant thought.

On The Other Hand...

But the sunspot-weather hypothesis is not accepted everywhere. Cohen, in his book, visits Mike Baillie at Queen's University in Belfast. Baillie studies tree rings. He is one of the world's senior scholars of ancient temperature. Baillie quibbles with Eddy's data, points out there are alternate explanations for temperature cycles, and wonders if we really know enough to reliably predict the future. I was surprised. I thought the Grandees of Science were of one mind about sunspots. But Baillie tells Cohen:

Of course, sunspots do probably have an effect on climate, but so do other factors....For a moment he seemed lost in his own thoughts. We don't know what effect volcanoes have. We don't have good returns for past tsunamis, or how often the Earth has been struck from space: but people think I'm a little crazy worrying about all this.

This is one of those subjects that refuses to resolve. Cohen's book is deep meditation on how the sun affects our culture, our history, our myths, but even he seems very wary about the sunspot -global warming connection. He ends his chapter:

We are back almost to where we began: The Sun clearly creates climate; but just how much does it vary it?

For that, he has no answer.

Richard Cohen's new book is called Chasing The Sun: The Epic Story of the Star that Gives Us Life; Chris Impey, quoted above, also talks about the sun in his new book How it Ends: From You to the Universe.