Accessibility links
Jumping Fences With Bees (A New Extreme Sport) : Krulwich Wonders... People who literally run with bees, who dash across meadows inside a bee swarm, learn a few things. One, for example, thinks his bees can recognize him and vice versa: he can say "That's my bee!" .... and be right.

My friend Kevin Kelly wrote this and he says it's true. It describes a desire so odd, so strange that I have trouble imagining anyone wanting to do this. This isn’t Mark. This is someone equally strange. LEE JIN-MAN/AP hide caption

Kevin's friend Mark, dreamed, apparently, of inserting himself into the midst of a hive of bees. Like hurricane chasers who push to the eye of the storm, Mark wanted to be dead center in a living hive of bees.

For many years Mark Thompson, a beekeeper local to my area [Kevin lives south of San Francisco], had the bizarre urge to build a Live-in-Hive -- an active bee home you could visit by inserting your head into it.

For whatever reason (I can think of several hundred), Mark never got around to building his co-habitable beehive until one day, entirely by chance, he was working in the garden and a swarm of bees showed up. 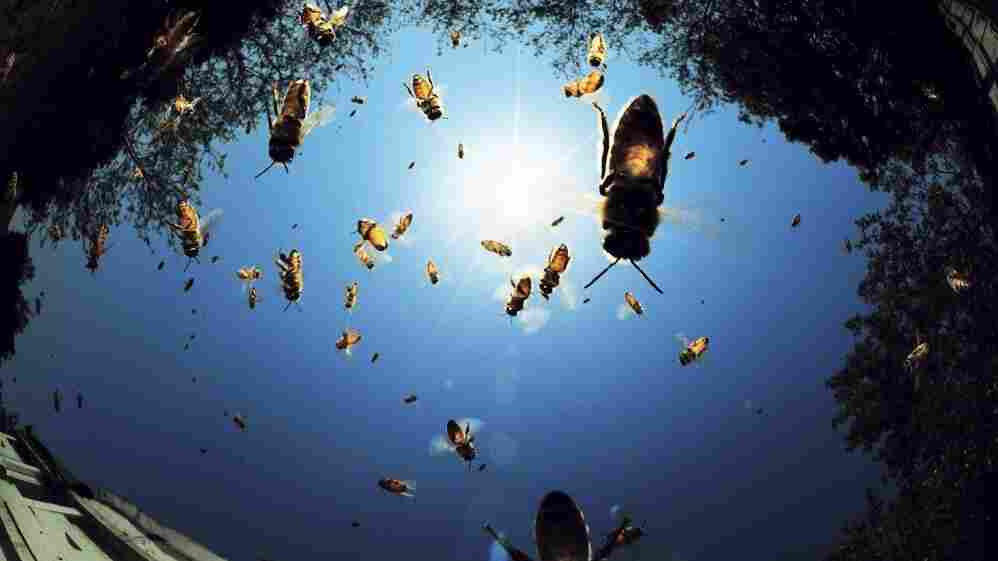 The black cloud coalesced into a 20-foot-round black halo of 30,000 bees that hovered, UFO-like, six feet off the ground, exactly at eye level.

Then, as  Kevin tells the story...

The flickering insect halo began to drift slowly away, keeping a constant six feet above the earth. It was a Live-in-Hive come true. Mark didn't waiver. Dropping his tools he slipped into the swarm, his bare head now in the eye of the bee hurricane.

He trotted in sync across the yard as the swarm eased away. Wearing a bee halo, Mark hopped over one fence, then another. He was now running to keep up with the thundering animal in whose belly his head floated.  They all crossed the road and hurried down an open field, and then he jumped another fence.

He was tiring. The bees weren't; they picked up speed. The swarm-bearing man glided down a hill into a marsh. The two of them now resembled a superstitious swamp devil, humming, hovering, and plowing through the miasma. Mark churned wildly through the muck trying to keep up. Then, on some signal, the bees accelerated. They unhaloed Mark and left him standing there wet, "in panting joyful amazement." 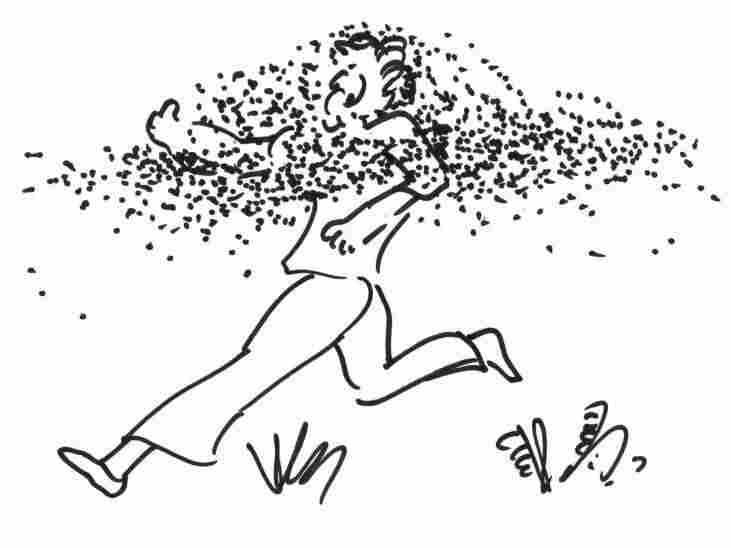 Whoa! What just happened? I know people who dream of swimming with dolphins, or joining a flock of geese,  but sticking your head into a cloud of bees, that's new to me. Maybe Mark's years as a beekeeper got him so curious about hive behavior he wanted to live the life, just for a few beats. I wanted to ask the man, but  when I tried to find him, Kevin told me, "all this happened 30 years ago and I have no idea where Mark is or what he is up to."

Dang.  So I asked Kevin (who has studied hive behavior) why wasn't Mark worried they would sting him? Wouldn't be bees be irritated by an invading bulbous, warm globe of flesh that didn't look or smell or act like a bee? And why DIDN'T they sting him? Was Mark some sort of bee-whisperer? Or maybe the bees didn't know he was there?

Kevin wrote me back:

Typically bees will swarm when their queen leaves the colony and it's time to move to a new location. In a typical swarm, writes bee scholar Thomas Seeley, "the swarming bees fly round each other in a wild whirl, forming a cloud approximately...30 to 60 feet across, with their queen flying somewhere in their midst."  They travel, he says, at 3 to 4 miles an hour, that's brisk walking, or maybe trotting speed for us.

Peter Cook (who lives near Kevin and is co-founder of the Santa Cruz Bee Keeping Guild) told the Santa Cruz Sentinel, "While many people panic when they see a bee swarm...that is when honeybees are most gentle." 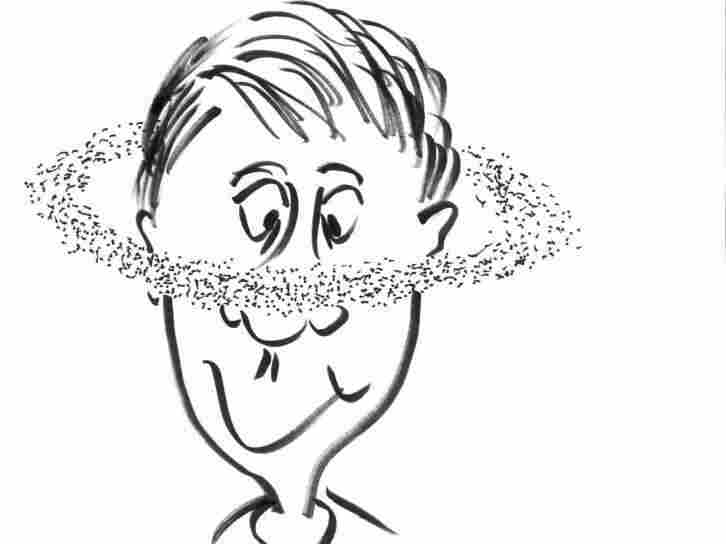 He went on to say that when bees have just left the hive, they "are the least dangerous because they don't have anything to defend and have just gorged on honey to see them to their next home. You put your hand into it and it's just like petting a kitten -- it's warm and fluffy."

So Mark had lucked out. He'd been presented with a  hive that would ignore him AND allow him in,  kind of like a warm Casper the Ghost.

Which is not to say that bees can never recognize an individual human. True, they paid no attention to Mark, but the question of bee/human recognition,  says Kevin, is an open one:

The great beekeeper (and holder of the world record Most Honey from One Hive) Ormond Aebi claimed his bee hives (not individual bees) could distinguish him from other workers. Since Ormond had been breeding his own colonies for 40 years this might be plausible -- that he [had bred] them unconsciously
favoring ones that "knew" him.

And maybe it can even work the other way. This same beekeeper Ormond Aebi told the Santa Cruz Sentinel he was so familiar with the bees from his hives that when he was out driving, his father would say, "Ormond, isn't that one of our bees?," and Ormond would know. I'll say, 'No, I don't think so,' or 'Yep, sure is.'

Sometimes people who pay exquisite attention see exquisite things. I don't know if Ormond Aebi could really tell one bee from another, but who knows? Maybe he could.