Accessibility links
60 Wild Coyotes Patrol Chicago (And Occasionally Stop At Convenience Stores) : Krulwich Wonders... Coyotes are pacing the streets and parks of Chicago, but they're not the predators you might expect -- more than 60 of them have been fitted with radio collars and have Cook County's blessing to roam wild and earn their keep catching small rodents.

This is a coyote "patrolling" the streets (and not just any street, this is State Street!) in downtown Chicago. It's supposed to be there, say the police. And it's not alone.

Chicago's Cook County now has over 60 coyotes fitted with radio collars (plus a good many uncollared ones) roaming parks, alleys, yards and thoroughfares in one of the biggest cities in America. The animals earn their keep eating small rodents, especially rats and voles. The Cook County, Illinois, Coyote Project calls itself "the largest urban study of coyotes in the world."

We have tracked the coyotes day and night and located the collared coyotes more than 40,000 times. This allows us to peek into the hidden lives of urban coyotes. We use results from this unique project to answer common questions regarding coyotes in urban areas.

Their first animal, called "Big Mama" was caught in 2000. "She was a young, transient coyote that was not a member of a group," says Dr. Stan Gehrt of Ohio State who directs the project. By 2002, she had settled down with an uncollared male friend (called, less warmly, "Number 115"), in a heavily-developed area a few miles from O'Hare International Airport. Together Mama and 115 have had at least six litters, producing 45 babies, and those babies now have babies. Big Mama's large family seems to live very discreetly in Chicago. People hardly ever see them. 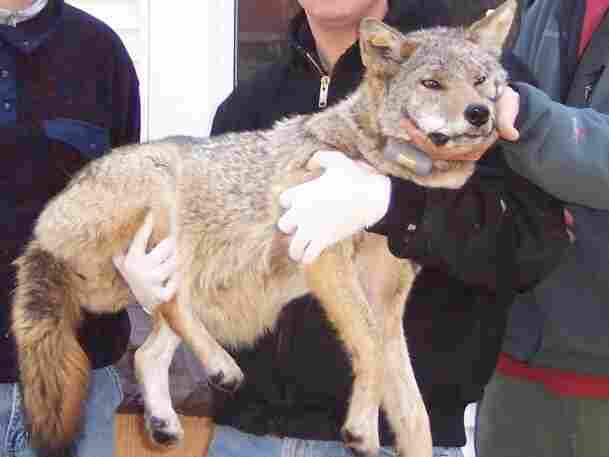 Big Mama being checked out in 2004. Her radio transmitter is around her neck. Dr. Stanley Gehrt/The Cook County, Illinois, Coyote Project hide caption

How do they avoid humans? Well, if you look at these maps, you can see the family spends most of its time hidden in city parks. In this survey, the Yellow Dots show resting spots for Big Mama, and red dots represent 115. If you look closely, it's clear they stick to green spaces. So do their cubs. 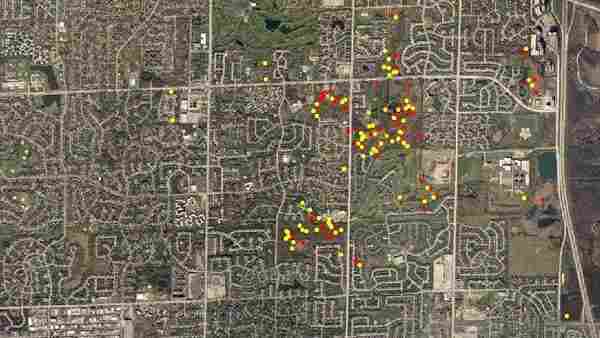 They hunt mostly at night, avoid contact with people, and usually run away from barking dogs, even teeny ones. Stan Gehrt says he's seen small Pekinese house dogs chase coyotes away. Every so often, a coyote has killed a dog or cat, but this is still rare. They like to roam golf courses, municipal parks, public land and their dens are always hidden, often (as you see below) in trees. 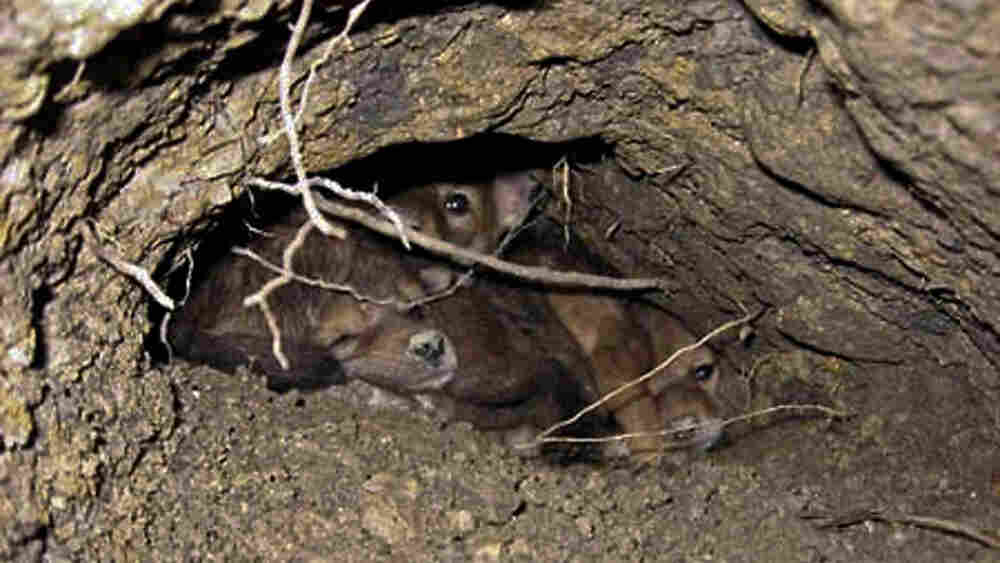 Coyotes are territorial and Chicago now has very distinct coyote neighborhoods. Even Big Mama's family has its own range boundaries. Big Mama, Coyote 115 and their first two children (born in 2006) are represented here by different colors. And as you can see from these radio tracks made in 2007, they often go their own ways. 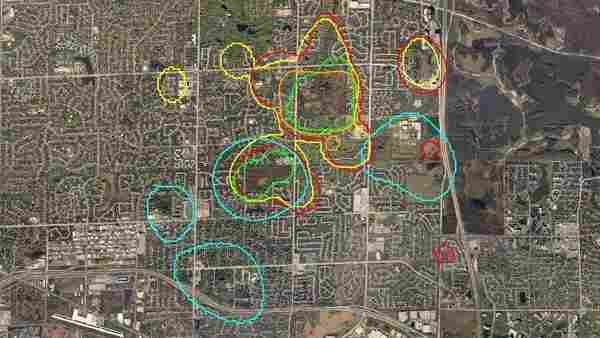 Project workers always know where the collared coyotes are. They caught random glimpses of Big Mama. She was seen crossing 8 lanes of traffic on I-290; her male companion often with her. "They are similar to many married couples," the project's website says, "where at times they are inseparable, and other times they take short breaks from each other, but they have defended the same territory together continuously."

By 2009, Big Mama's radio signal was getting weak. The project (after trying and trying for six months) recaptured her on February 4, 2010. "She was in great condition for a nearly 12-year-old great grandma," Stan Gehrt wrote us. "She weighed about 32 pounds, and had no injuries or illness."

You can see her posing on a living room sofa in the photo below. 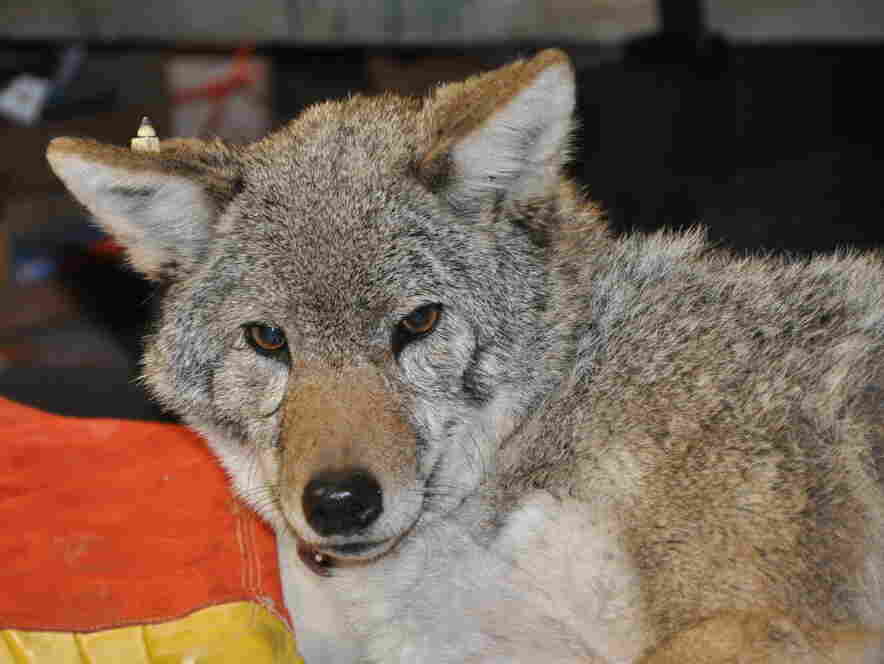 Then, in early April, for no special reason ("The only malady the pathologists could fine was kidney failure") the signal stopped moving. Within hours, a project volunteer found her next to a public park. She had died, apparently from old age. Her friend, Coyote 115, has never been recaptured. He's still out there, somewhere in Chicago.

While they are masters of discretion, every so often a coyote will break the rules and make contact with humans. The most famous encounter happened in 2007 when an otherwise calm coyote walked into a Quizno's sandwich shop in downtown Chicago, and apparently confused (or hot), hopped into a refrigerated case and sat quietly in the fruit juice section.

"It wasn't aggressive at all," restaurant manager Bina Patel told the Chicago Tribune. "It was just looking around." Police came and moved that coyote to someplace safer. Probably a park. 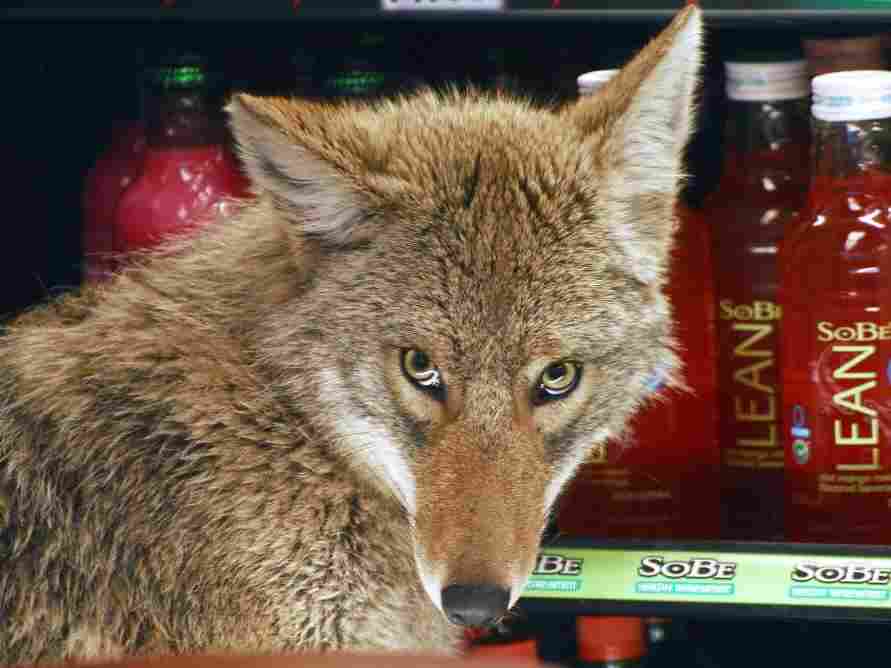