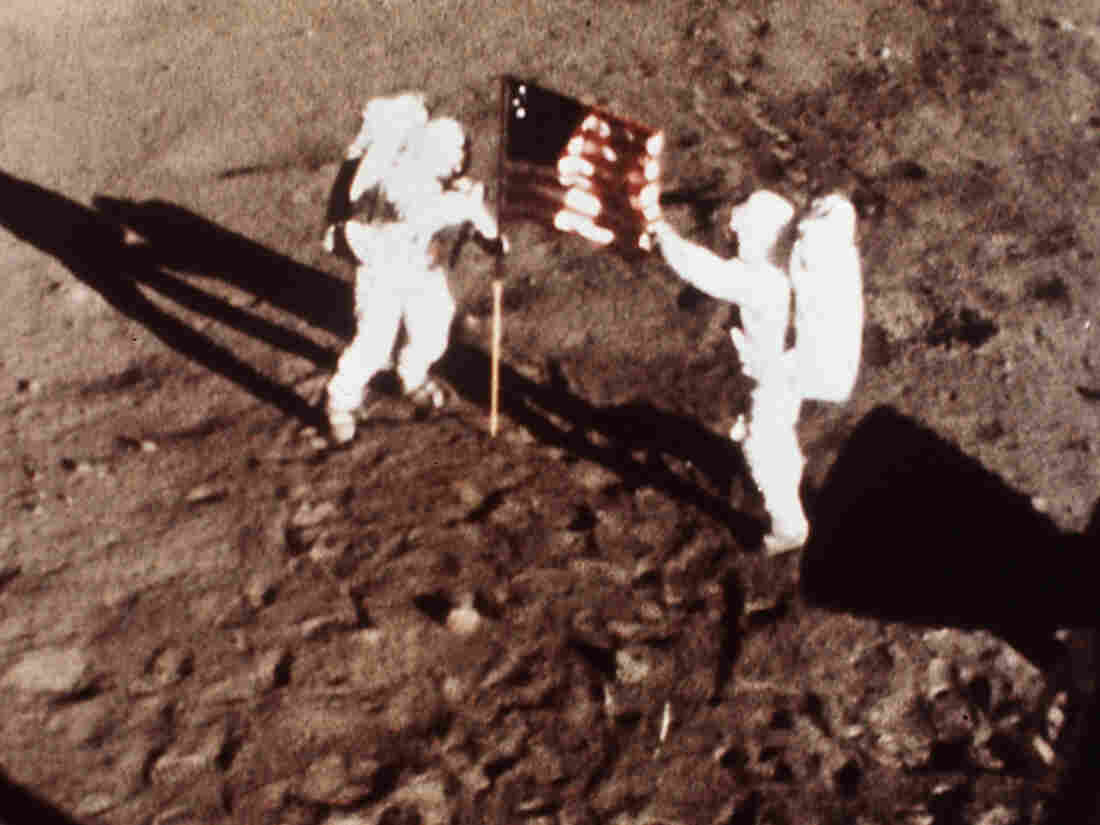 On July 20, 1969, Apollo 11 astronauts Neil Armstrong and Edwin E. "Buzz" Aldrin, the first men to land on the moon, plant the U.S. flag on the lunar surface. AP/NASA hide caption 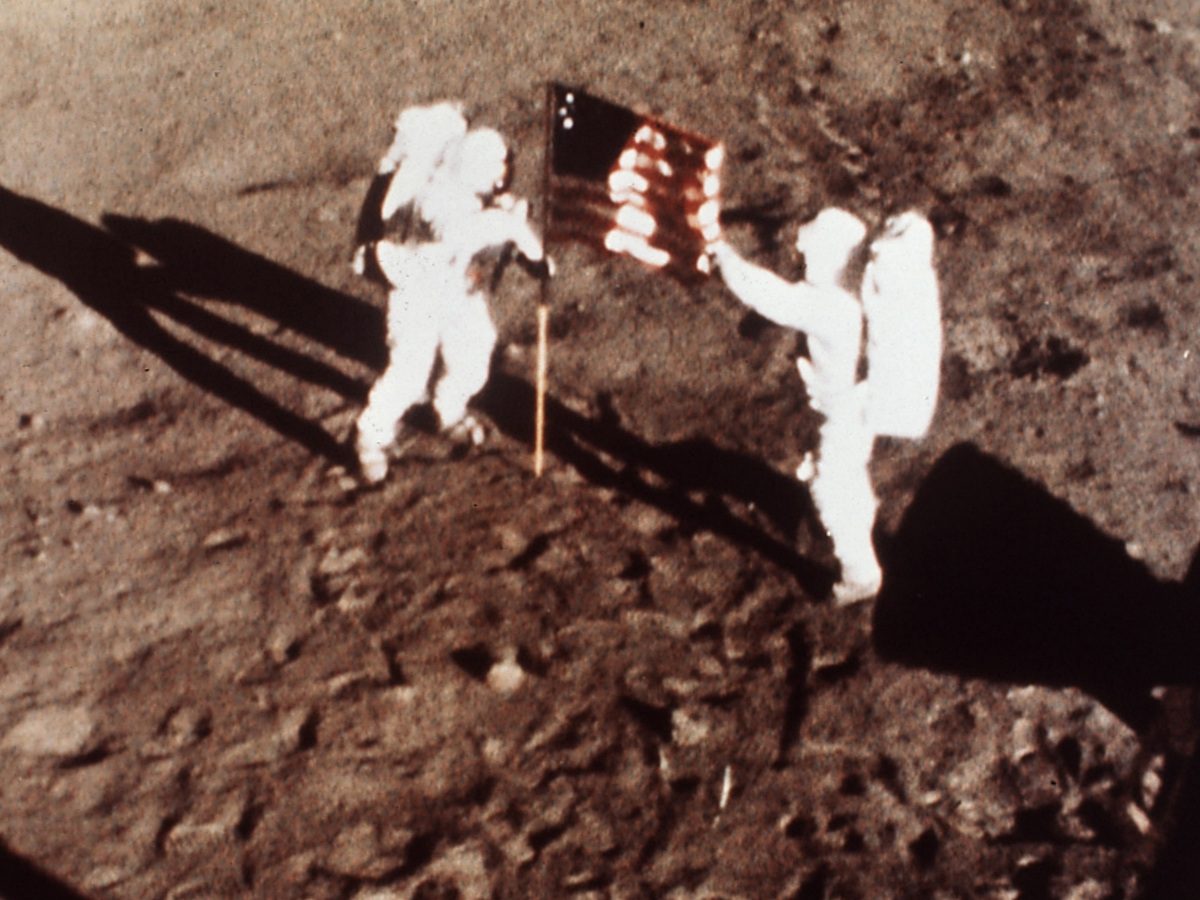 On July 20, 1969, Apollo 11 astronauts Neil Armstrong and Edwin E. "Buzz" Aldrin, the first men to land on the moon, plant the U.S. flag on the lunar surface.

Well, this doesn't happen every day.

In yesterday's post, I talked about Neil Armstrong and Buzz Aldrin's walk across the lunar surface back in 1969 and wondered, how come they walked such a modest distance? Less than a hundred yards from their lander?

Today Neil Armstrong wrote in to say, here are the reasons:

But basically, he says, we were part of a team and we were team players on a perilous, one-of-a-kind journey. Improvisation was not really an option.

But, reading between the lines, I kinda think he wanted to do more, go further. Anyway, read for yourself:

I was delighted to read your December 7 column on the the Apollo 11 lunar surface traverses, The NASA maps do accurately portray the locations of the pathways used to complete the myriad of tasks we were assigned. And, although I have not checked, I believe the comparison with the size of athletic fields is reasonably accurate.

The answer to that question is: Just about anyone who had any interest in learning the answer. The plan for the lunar surface work was widely distributed and we even did a full dress rehearsal for the press at the NASA Johnson Space Center.

It is true that we were cautious in our planning. There were many uncertainties about how well our Lunar module systems and our Pressure suit and backpack would match the engineering predictions in the hostile lunar environment. We were operating in a near perfect vacuum with the temperature well above 200 degrees Fahrenheit with the local gravity only one sixth that of Earth. That combination cannot be duplicated here on Earth, but we tried as best we could to test our equipment for those conditions. For example, because normal air conditioning is inadequate for lunar conditions, we were required to use cold water to cool the interior of our suits. We did not have any data to tell us how long the small water tank in our backpacks would suffice. NASA officials limited our surface working time to 2 and 3/4 hours on that first surface exploration to assure that we would not expire of hyperthermia. After returning to and repressurizing the Lunar Module, we were able to drain and measure the remaining water in the backpacks to confirm the predicted.

There was great uncertainty about how well we would be able to walk in our cumbersome pressurized suit. My colleague demonstrated a variety of techniques in view of the television camera that I had installed in a position predetermined to be in the optimum spot for coverage of all of our activities. Preflight planners wanted us to stay in TV range so that they could learn from our results how they could best plan for future missions. I candidly admit that I knowingly and deliberately left the planned working area out of TV coverage to examine and photograph the interior crater walls for possible bedrock exposure or other useful information. I felt the potential gain was worth the risk.

It is true that we would have liked to stay on the surface longer and traveled further away from the Lunar Module and the television camera. But we had a number of experiments to install, samples to document and collect, and photographs to take. The time available was fully allocated and we were working diligently to complete our assigned tasks. The Lunar Laser Ranging Retroreflector we installed is still in use today in a variety of scientific experiments.

Later Apollo flights were able to do more and move further in order to cover larger areas, particularly when the Lunar Rover vehicle became available in 1971. But in KRULWICH WONDERS, you make an important point, which I emphasized to the House Science and Technology Committee. During my testimony in May I said, "Some question why Americans should return to the Moon. "After all," they say "we have already been there." I find that mystifying. It would be as if 16th century monarchs proclaimed that "we need not go to the New World, we have already been there." Or as if President Thomas Jefferson announced in 1803 that Americans "need not go west of the Mississippi, the Lewis and Clark Expedition has already been there." Americans have visited and examined 6 locations on Luna, varying in size from a suburban lot to a small township. That leaves more than 14 million square miles yet to explore.

I have tried to give a small insight into your question "Who knew?"

I hope it is helpful.