We are in Vienna. Leonard Bernstein is on the podium. The Vienna Philharmonic is on the stage, Haydn's Symphony no.88 is in the air, and our question is: Where are Bernstein's hands?  Why isn't he using his hands? He's moving nothing -- except his face.

Me: What's he doing?

Ezra: Appreciating. My friend George Steel, Director of the New York City Opera calls this technique "eyebrows only," though as you can see, his chin is working, his eyes are darting, his mouth is up, down. He's liking, noticing, saying thank you using only his face muscles. You should let people see this.

Me: OK, ok. Here's Leonard Bernstein finishing an encore performance of the 4th movement of Haydn’s 88th. Watch the man.

Me: That was so weird.

Ezra: Why weird? This is Haydn, remember. Haydn's like a ticking clock, his music just goes. Back in his day, they didn’t even have "professional" conductors. The lead violinist would begin, set the tempo and everyone followed. And, by the way, this is one of the finest symphony orchestras in the world playing music they know so well it’s almost part of their DNA, so Bernstein's just letting them go.

Me: So you're saying he's not conducting? He's just watching?

Ezra: Oh, no, he's conducting. This is what Israeli conductor Itay Talgam calls "doing without doing."

[T]he conductor must not only make his orchestra play, he must make them want to play. He must exalt them. Lift them. Start their adrenaline pouring. Either by pleading or demanding or raging -- it doesn't matter. It is not so much imposing his will on them like a dictator. It is more like projecting his feelings around them...It doesn't really matter how well you move with your hands. It should be in your face, it should be in your expression.

The Expressions of the Emotions in Man and Animals

Me: Yeah, but this is all in his face.

Ezra: And he certainly has got a face for it, hasn't he?

Me: We all do. Charles Darwin used to say that facial expressions are an instinctive, evolved "language of emotion," that long before we had words, our faces learned to communicate feelings. Could we say that Bernstein is illustrating Darwin's notion that humans are better than the other mammals at talking with their faces?

Me: Yes. As my friend and Radiolab colleague Carl Zimmer once wrote, we humans are the Stradivariuses of faces:

When primates evolved about 60 million years ago, big blocks of facial muscles broke into small bits of specialized tissue. Some did nothing but raise eyebrows. Some exclusively puckered lips. Nerves developed new branch patterns across the face to control the new muscles, and the face-controlling regions of the brain grew.

Ezra: When I showed the video to Russell Ger, a young conductor in Boston and Australia, he said maybe he was showing off to the audience in Vienna. Or --

Or was it for the cameras? To be a bit more cynical about it, was it simply "Lenny in the service of being Lenny" as one person I shared this video clip with put it.

Usually we think of Bernstein in full motion, like his hero, Gustav Mahler, who would conduct with his whole body. This is Mahler: 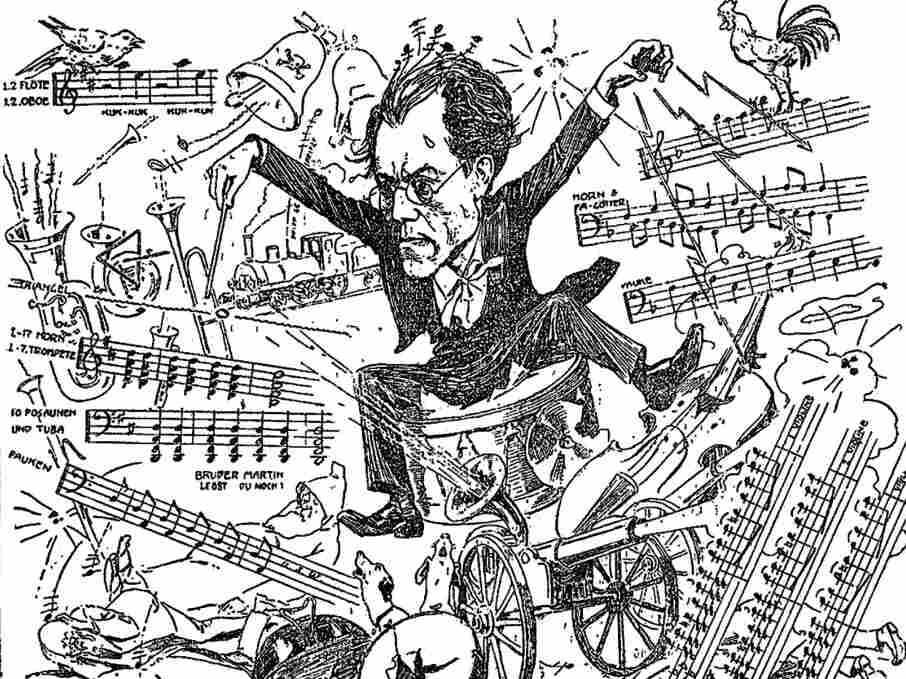 A caricature of Gustav Mahler conducting his Symphony no. 1 n from 1900. Imagno/Getty Images hide caption

So for Bernstein to make this sudden switcheroo from big gestures to absolute minimum, it's so surprising, it only makes Bernstein more noticeable. Modesty becomes a way for him to show off.

Me: Well, I was just thinking there are so many ways to conduct an orchestra, we shouldn't think one way is legit and the others not.

Ezra: Exactly. Bernstein can move like Mahler, use his head, his hands, or not move at all, as long as he's communicating to the ensemble, he's doing his job. I know one guy, Valery Gergiev from Russia, who does it with a toothpick. 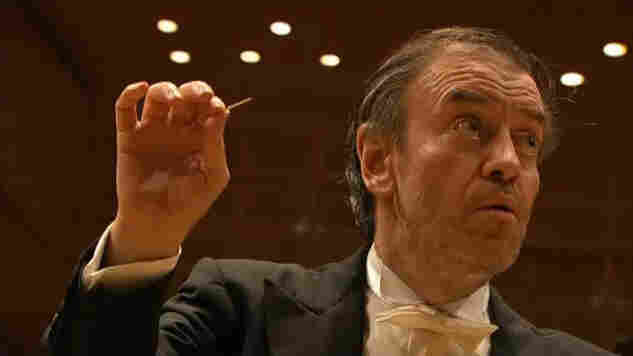