Accessibility links
Could It Be? Spooky Experiments That 'See' The Future : Krulwich Wonders... Tests suggest that today you'll do something you don't know about yet -- but somehow, it's already happened...and affected you.

Could It Be? Spooky Experiments That 'See' The Future

Could It Be? Spooky Experiments That 'See' The Future

Later today you are going to do something, something you don't know about yet. 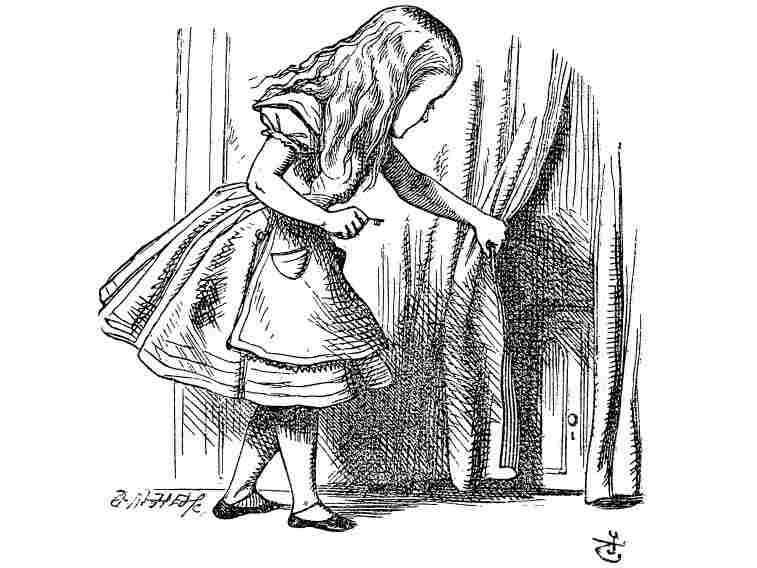 One of the most respected, senior and widely published professors of psychology, Daryl Bem of Cornell, has just published an article that suggests that people -- ordinary people -- can be altered by experiences they haven't had yet. Time, he suggests, is leaking. The Future has slipped, unannounced, into the Present. And he thinks he can prove it.

Already critics are jumping up and down, saying this can't be, time is not porous, the experiments are flawed. But because this is the Professor Daryl Bem (he's in your high school textbook for his work on self perception) and because the journal publishing his article is top-of-the-line rigorous, all over the world psychologists are trying to duplicate what Dr. Bem has done. If serious scientists can repeat his results, this story is going to be big. 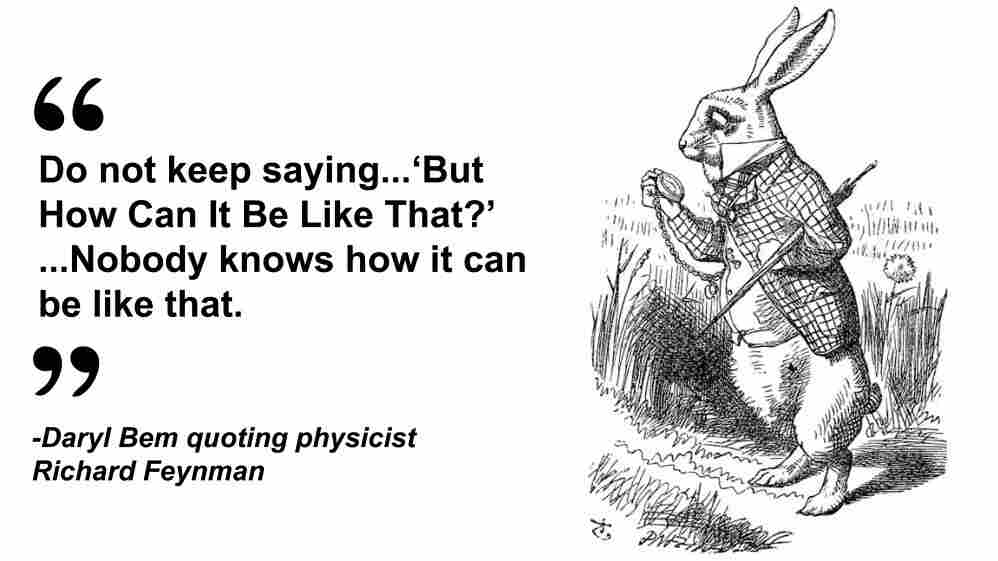 But while we're waiting, let me tell you what he did. (Or at least what I think he did. I'm not a psychology buff, so I hope I get this right) The details are fascinating.

Dr. Bem has been quietly testing extrasensory perception claims for 8 years. His paper reports a series of 9 different experiments, but two especially caught my eye.

The first is a computer quiz. 100 Cornell students, 50 males, 50 females, were invited to sit in front of some computers. Here are Bem's instructions:

This is an experiment that tests for ESP. It takes about 20 minutes and is run completely by computer. First you will answer a couple of brief questions. Then, on each trial of the experiment, pictures of two curtains will appear on the screen side by side. One of them has a picture behind it; the other has a blank wall behind it. Your task is to click on the curtain that you feel has the picture behind it. The curtain will then open, permitting you to see if you selected the correct curtain. There will be 36 trials in all. Several of the pictures contain explicit erotic images (e.g., couples engaged in nonviolent but explicit consensual sexual acts). If you object to seeing such images, you should not participate in this experiment.

OK, that's two curtains. One is hiding nothing. The other hides a picture, often a hot picture with much nakedness.

Since a computer randomly chooses what's behind each curtain, one would expect the students to choose correctly half the time. Fifty-fifty.

Weirder still, Bem reports that the news appeared to arrive at the brain before the computer made its choice. "The remarkable finding [we made] is that their physiological responses are observed to occur about 2-3 seconds prior to the appearance of the picture, even before the computer has decided whether to present a non-arousing or an arousing picture," Bem told the Cornell Daily Sun.

Everybody knows practice improves performance. If you study a list of words, if you try to memorize them, you should be able to remember them better later. But suppose you reverse the process? Suppose you study the words after the test? Your friends will smirk. "After the test is too late, loser. People who study after tests don't graduate."

In one of Bem's studies, 100 college students were shown a list of 48 common nouns flashed on a computer, one at a time, for three seconds each. The instructions said: Look at the word, try to visualize it (see "tree;" imagine "tree") and then go on to the next word.

Afterward, they were told, Surprise! We're going to give you a quick memory quiz. How many of the words we just showed you can you recall?

Students typed in the words they remembered.

Then a computer went through the same list of words and chose 24 -- totally randomly; no human was involved.

Before you leave, the students were told, we still want you to scan and then type the words the computer selected. As they typed, the students were, of course, committing those randomly selected words to memory. But who cares? The test was over.

Did The Future Whisper The Answers?

Now comes the surprise. When Dr. Bem checked the original surprise recall test, a weird pattern emerged. He noticed the students for some reason turned out to be better at recalling the words they had scanned and retyped after the test.

A second group of 24 words served as a control. The computer never asked students to retype them. Those words weren't recalled as often.

Then Bem drops his bomb: "The results show that practicing a set of words after the recall test does, in fact, reach back in time to facilitate the recall of those words."

The results show that [this test] does, in fact, reach back in time...

You can well understand why this paper is raising hackles all over psychology-ville. This is not the first time a prominent psychology professor has found statistical evidence of extrasensory perception, but in these experiments, the methods are classical, simple, well known and repeatable. Already one attempt to repeat Bem's work has failed.

For me (untrained in these matters) the niggling question is Bem's numbers: 53.1 percent is slightly better than chance. It's not 50-50, but is this really significant? The effect shows up across nine different experiments, involving more than a thousand subjects. So the effect in cumulative. But is that enough?

Here's what Melissa Burkley writes in her blog at Psychology Today:

...small effect sizes are not that uncommon in psychology (and other sciences). For example, on average, the Bem studies showed an effect size of .20 (out of a possible range of 0-1). Although that is fairly small, it is as large as or larger than some well-established effects, including the link between aspirin and heart attack prevention, calcium intake and bone mass, second hand smoke and lung cancer, and condom use and HIV prevention (Bushman & Anderson, 2001). And as Cohen has pointed out, such small effect sizes are most likely to occur in the early stages of exploring a topic, when scientists are just starting to discover why the effect occurs and when it is most likely to occur.

It's not like we've never thought about this before. In his paper Bem recalls that in "Through the Looking Glass," the White Queen casually mentions to Alice that in her realm, "memory works both ways." 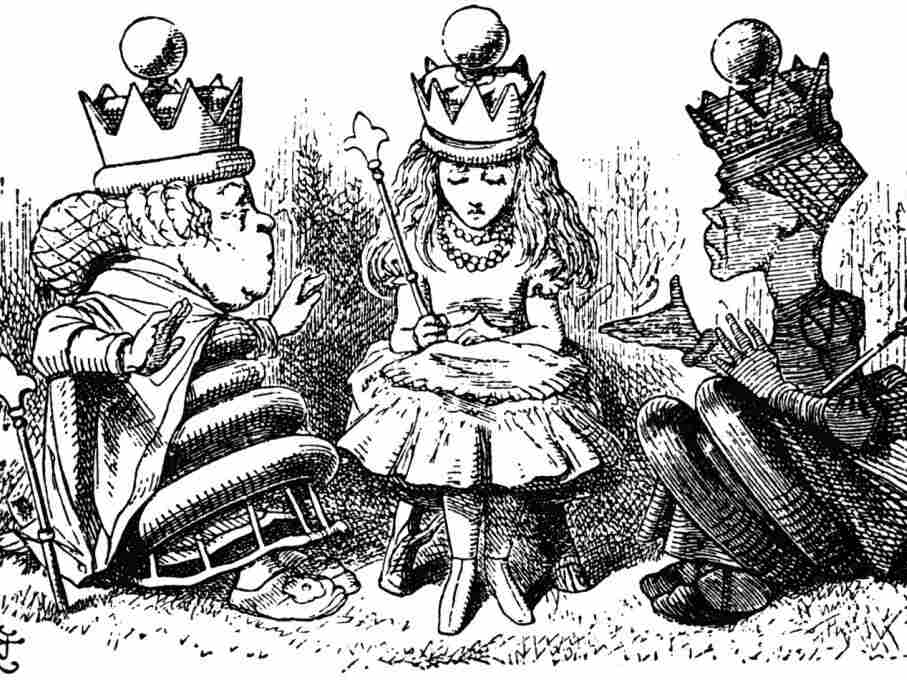 Not only does the Queen remember past events, she can also remember "things that happened the week after next."

Alice, always puzzled, says "I'm sure mine only works one way...I can't remember things before they happen." The Queen seems a little sorry for Alice. "It's a poor sort of memory that only works backwards," she says.

In a year or so, Bem coolly suggests, we may have to agree with the Queen.