Accessibility links
What's The Longest Word In The English Language? : Krulwich Wonders... Finding the longest word that describes something real can be a challenge — especially when you are competing with Mary Poppins.

What's The Longest Word In The English Language?

What's The Longest Word In The English Language?

Well, that depends on what we mean by "word." If a word is coined just to be long, like supercalifragilisticexpialidocious, should that count?

Here are the top candidates. One comes from Shakespeare (of course.) In Love's Labour's Lost, a clown named Costard, arrested for having unlawful fling with a milkmaid, gets to say...

That's 27 letters. The word means something like "loaded with honors," but, suspiciously, it comes in the middle of a conversation about wordiness, so it might be a word created to be wordy.

Here's one you know better:

It has 28 letters, but what is it? Just a bundle of suffixes and prefixes piled up into a little attention-grabbing hummock.

The most famous long word (at least in our times) is, of course, Disney's...

It uses 34 letters, but doesn't mean anything beyond giving Julie Andrews and Dick Van Dyke (and a slew of animated characters) something to dance to.

So what if we want a word that is not famous for being long, but a word that describes something real. What's the longest one of those?

Science writer Sam Kean, in his book The Disappearing Spoon, worked really hard on this and after much sleuthing, he landed on a word that comes not from dancing English nannies but from virus-hunting scientists. It's a protein, found in a virus, but this is a very dangerous, economically important virus, the first ever discovered...

It appeared in all its lettery splendor in 1964 in a reference source for chemists, "Chemical Abstracts." It is one thousand, one hundred and eighty five letters long. So as Sam says, "Take a breath," and... 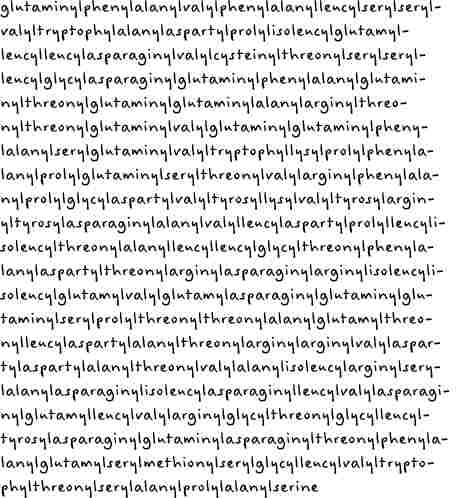 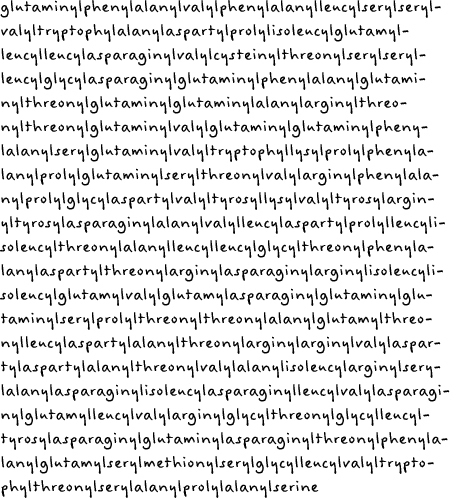 Ta-ta-boom! This has to be the champ. (I know there's a suspiciously large number of "yl" combinations in there, but that's a suffix that biochemists use to describe certain amino acids, so it's truly descriptive). Is it time to unpack the crown?

Is This Really A Word?

Well, just a sec — I'm thinking to myself, is this really a word? You can't speak it. Does anybody use it? And — not to be over-fussy, but aren't there bigger molecules than the 1,185-long mosaic virus?

Turns out, there are bigger molecules. Sam found a tryptophan protein that runs 1,913 letters — that, he says, is over 60 percent longer than the tobacco protein. Which may explain why, for awhile, the Guinness World Records folks ignored tobacco and called tryptophan the king.

Does Anyone Use It?

But that brings us to our second question. Is it being used? That's key. This is about language. Words that aren't used don't count. The tobacco virus word was used (published) in 1964. What about tryptophan? Sam, being Sam, checked himself into the Library of Congress and began looking and...

...after spending hours in the dimly lit stacks...I never located the tryptophan molecule in Chemical Abstracts. It just doesn't seem to have appeared in its full, spelled-out form. To be doubly sure, I hunted down the academic paper that announced the decoding of the tryptophan protein...and there the authors chose to abbreviate the amino acid sequence. So its full name as never appeared in print as far as I can tell, which probably explains why Guiness later rescinded the listing for it as the longest word.

Since the sixties, even though there are bigger, longer molecules that could be words, science journals don't bother to spell them because, says Sam, it would use up enormous amounts of paper and space and frankly, it's just too tedious.

Therefore, because it slipped into a publication early, the tobacco virus — sound the trumpets! — gets the nod. It is the longest word in our language.

Final quibble: The tobacco virus "word" is entirely technical. Its spelling is essentially a syllabic string of abbreviations for amino acids.

Isn't there a longish word that is just, you know, a word? (but that's not supercalifragilisticexpialidocious?)

Well, here's one that beats Disney. Sam found it in the Oxford English Dictionary. Their longest non-technical word is:

It's a disease. Or rather, it's slang for the disease you get when you inhale silicon dioxide which makes it hard to breathe. Unfortunately it was created to win a puzzle contest in 1935 and therefore doesn't pass some peoples' test for "real" words. Like supercalifragilisticexpealidotious, it might be what they sneeringly call a "trophy" word, something somebody made up to solve a riddle, not an organic, up-from-the-streets, authentic word.

So that leaves us — for the longest non-technical word in popular English, back with Ms. Poppins. She (and her cockney friend Burt) are holding on to their non-technical crown — which you'd expect. After all, she is practically perfect.

Sam Kean's book is The Disappearing Spoon And Other True Tales of Madness, Love, and the History of the World From the Periodic Table of the Elements, (Little Brown, 2010).