Accessibility links
Storks Stalked Ancient Humans? : Krulwich Wonders... The biggest threat to the 3-foot tall "hobbit" people living on the island of Flores, might have been a six-foot-tall stork.

Go back 30,000 years and picture an island somewhere in the Indian Ocean. Deep in its tropical forests we find a small group of early humans, tool-making, cave dwelling, social people who live on fruits, fish and occasionally meat. Nothing unusual here — except, very recently, modern scientists made two back-to-back discoveries about this place.

First, it appears that the Neolithic people who lived on the Indonesian island of Flores were incredibly small, the adults three feet tall, their kids about the size of owls. These little people — dubbed "hobbits" — lived on this island for at least 70,000 years. Second, and just recently, in this same forest, scientists discovered the bones of a never-before-seen bird. Six feet tall, extra-heavy, long and sharp beaked, no longer able to fly, this animal prowled the forest looking for meat. It is an ancestor of today's storks.

The mind boggles. Imagine yourself bumping into a wild, meat eating stork that is literally twice your size. 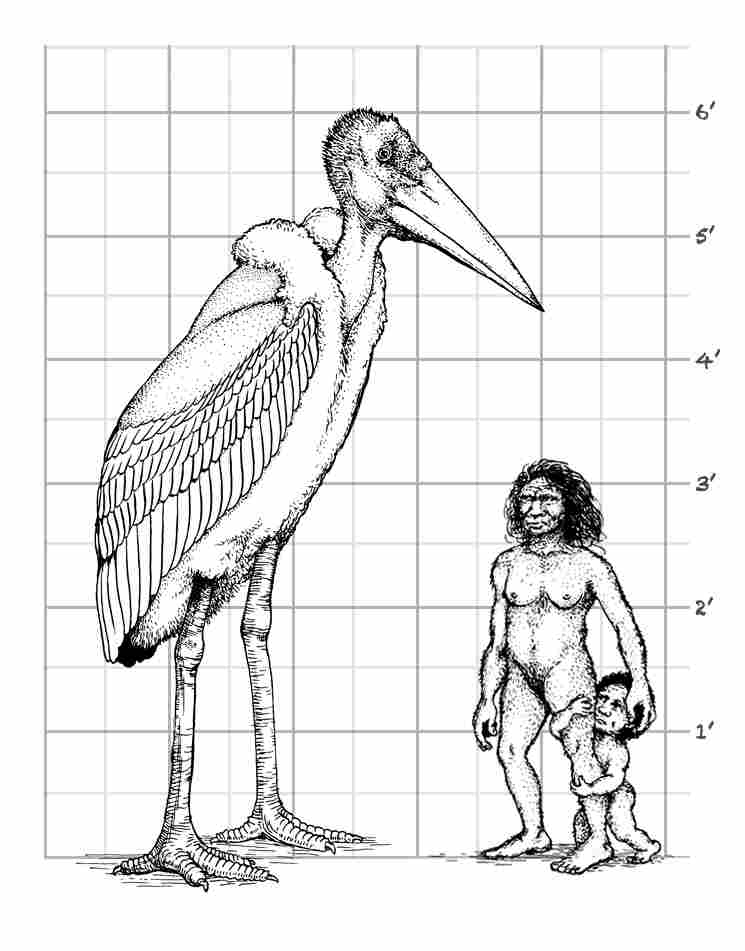 When the discovery of those stork bones was reported last month, the British tabloids went carnivore-crazy. The headline writers assumed (why not?) these birds ate people. "Giant Stork 'preyed on Flores hobbits,'" cried The Telegraph. "Stork that ate babies," said The Independent "rather than delivering them." The headlines suggested that human babies had been standard birdy breakfasts — a powerful image, for sure... 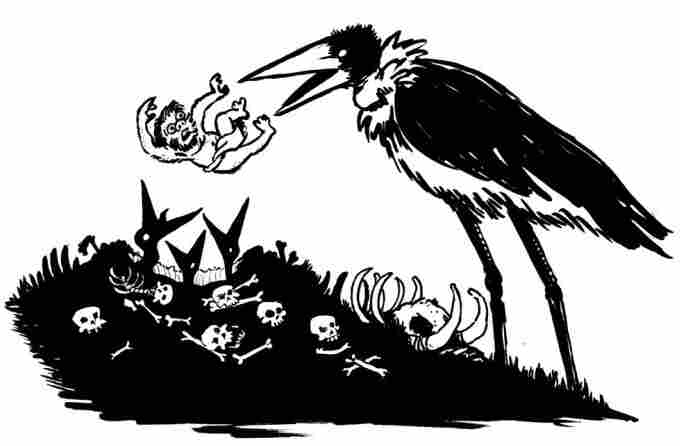 ...but what do we know, really? Brian Switek, a science writer at Wired Science who specializes in paleontology in his blog, Laelaps, took a rich, fascinating look at the fossil evidence and pointed out that Hanneke Meijer and Rokus Awe Due, the two scientists who described the stork bones, "did not mention the hobbits as prey for stork at all." No human skulls by the nesting sites, no telltale human bones in their guts.

That doesn't mean storks didn't eat hobbits. Those storks did eat dead animals, so says Switek, "it is not inconceivable that [the stork] L. robustus could have consumed young hobbits (or even scavenged dead adults)." Yet, with so little evidence, it's just as possible the menu could have gone the other way... 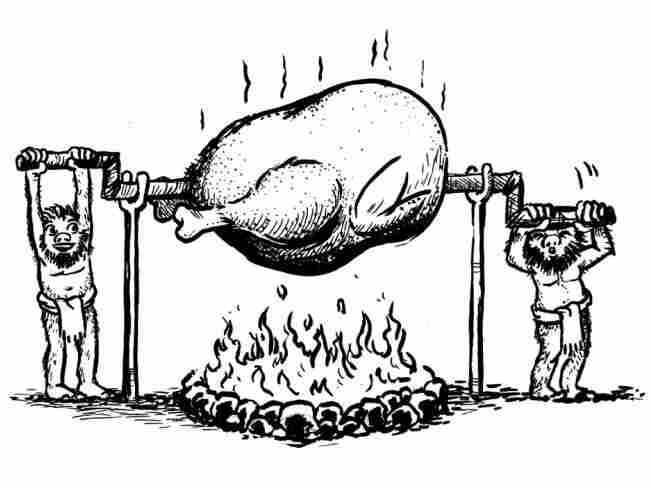 The more fascinating question, for scientists, is how these two creatures, the little hobbits and big storks, came to be on Flores.

The storks, obviously, flew in. Their height is not so surprising. Modern marabou storks can still be almost as tall. But once they landed and discovered an island with no lions, no tigers, no big bird eaters, they could run around and eat large rats (yum, yum). This, says Brian, was "paradise for a meat eating bird." They found so much food on the ground they lost their ability to fly and became ground-hunters.

The hobbits, on the other hand, probably arrived as full-statured bi-pedal descendants of Homo erectus but once they settled in, they began to get shorter. This happens on islands all the time. It's called the "Island Effect." As Brian describes it:

For reasons not yet fully understood, large species which become isolated on islands often become dwarfed while smaller species increase in size over time. These changes are probably not attributable to any single cause, but rather to an array of pressures involving competition for resources and the absence of large carnivores which affect species in different ways.

Like island-dwarf dinosaurs in Transylvania and island-dwarf mammoths in California and Siberia, gradually these island immigrants went through a dwarfing phase too. Partly to adjust to the local diet, they became smaller people.

Some paleontologists insist that the hobbits are not hobbits at all, but humans dwarfed by a brain disease. But more and more, scientists are buying the notion that these are the first known dwarf species of human. The hobbits have a name, Homo floresiensis.

Bottom line: what's new here is not that the storks were big, it's that the people were so surprisingly little. And vulnerable. 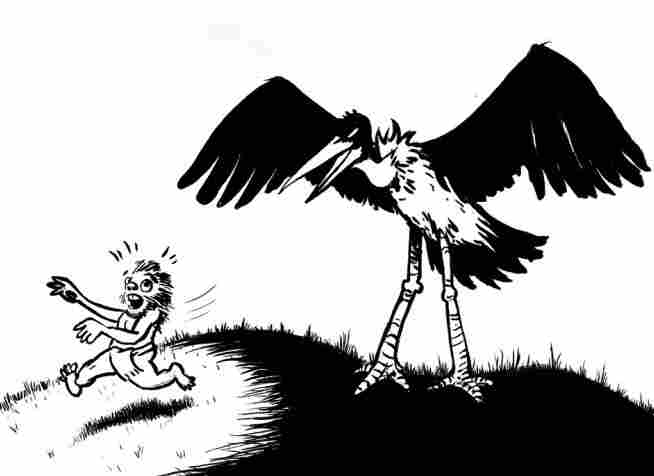 What was it like to be so little? One imagines that to a hobbit, 6 foot storks would seem invincible, like feathery giants stalking the landscape. Hobbits could hide from them. Maybe they would pray to them... 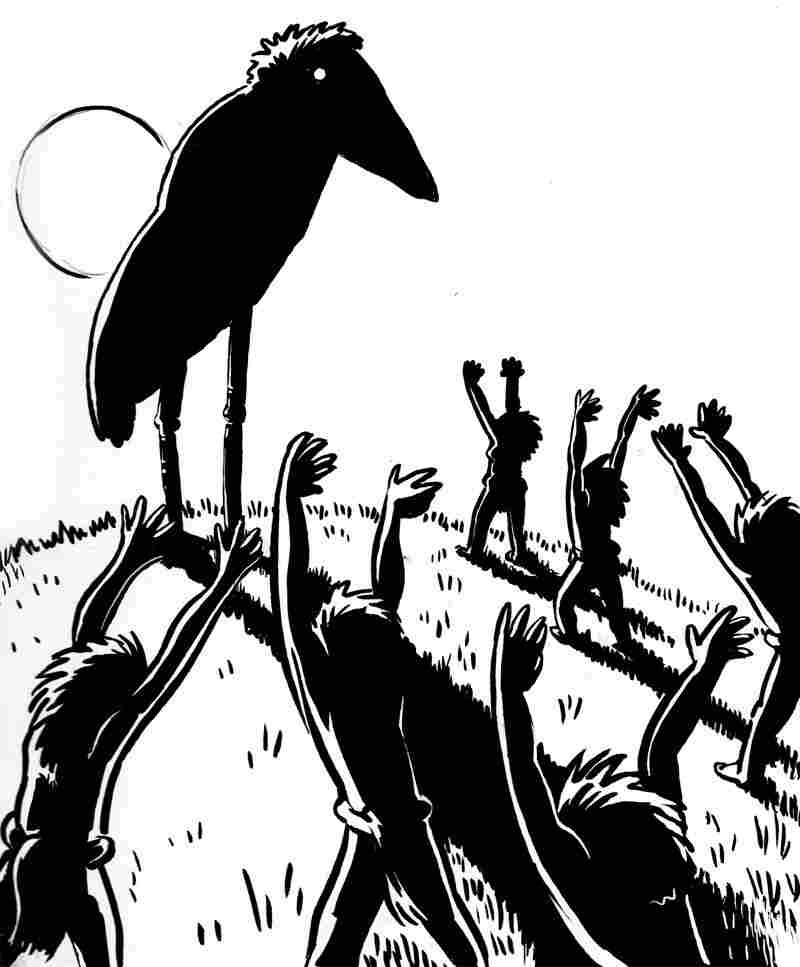 ...or dream magical dreams about them... 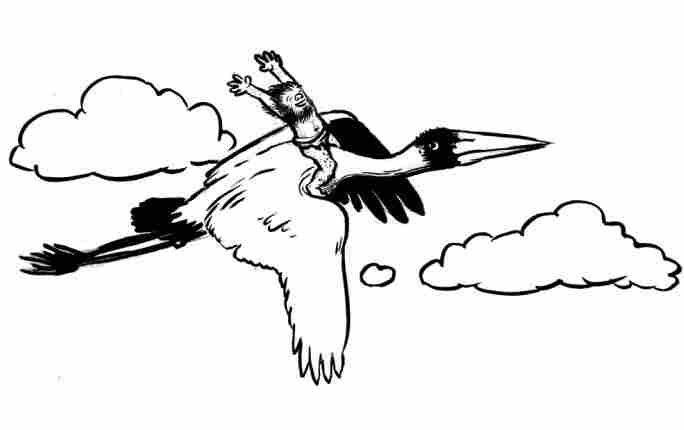 ...or demonize them. We don't know what the hobbits did. The last little people perished on Flores about 18,000 years ago. The storks died off as well.

But now that we know that tiny humans had to run from giant, bloodthirsty storks — that image, says Brian Switek, is going to stick in our modern heads, because, somewhere in our collective unconscious, we want to be scared, be chased, be enmeshed in the kingdom of animals...

The Flores stork was just the latest creature to be added to the menagerie of monstrous prehistoric creatures that enthrall us. As David Quammen concluded in Monster of God, "Such creatures enliven our fondest nightmares. They thrill us horribly...They allow us to recollect our limitations. They keep us company...If we exterminate the last magnificently scary beasts on planet Earth, as we seem bent upon doing, then no matter where we go for the rest of our history as a species — for the rest of time — we may never encounter any others."

We live in a world where there are no giant sloths, no saber tooth tigers, no terrifying dinosaurs, no monsters left. The ones we still have, the wild gorillas, the killer sharks, are disappearing. We keep a few of them in zoos and aquariums, where they are no longer threatening. That is why, Switek thinks, we need to go back in time to find new ones. "Prehistory is one of the few places where we can find monsters and let our imaginations run wild."

I'm not sure if big storks will ever thrill us the way dinosaurs do, but I imagine Steven Spielberg working on it right now, conjuring hungry-eyed storks, creeping through the underbrush, nearer and nearer to the darling baby hobbit cooing by the fire, their giant beaks dripping with fake blood...

Brian Switek has written a book about fossils, Written in Stone, Evolution, the Fossil Record and Our Place in Nature, (Bellevue Literary Press, 2010); Brian's blog is a regular compendium of Paleolithic scoops, gossip and elegant science. He also writes for Smithsonian Magazine's Dinosaur Tracking. Benjamin Arthur, who did the drawings for this story (and who shows every sign of having been a hobbit in a former life — since he imagined these scenes instantly and without any coaching) is an artist living in Santa Cruz, California. He most recently animated our story about Why Can't We Walk Straight. Benjamin's work can be found at his website.