What can I say? Kevin Kelly rules. I can't decide if he slid one by me or just bested me, but consider me beaten. 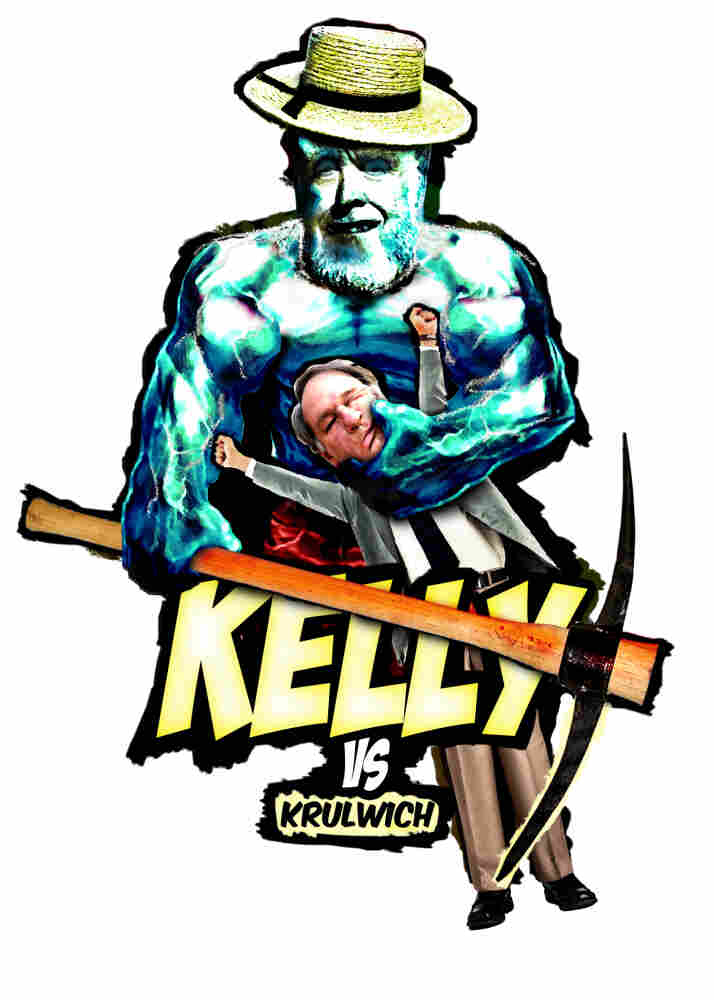 A few weeks ago, Kevin, founding editor of Wired Magazine and world-class gadget geek, made me this bet:

I bet, he said, "there is no species of technology that's gone globally extinct on this planet." By which he meant — or I took him to mean — there is no tool, no invention ever manufactured by humans that isn't still being made new today.

That's what he said on NPR's Morning Edition. Which is where I told him, "You're wrong. I will find a technology that has gone extinct, some bronze helmet, or chariot part or quill pen, something that definitely isn't being made anymore anywhere."

I appealed to you, my readers, to come up with suggestions. You gave me 2500 ideas. We sifted through them together. Then I chose these three: 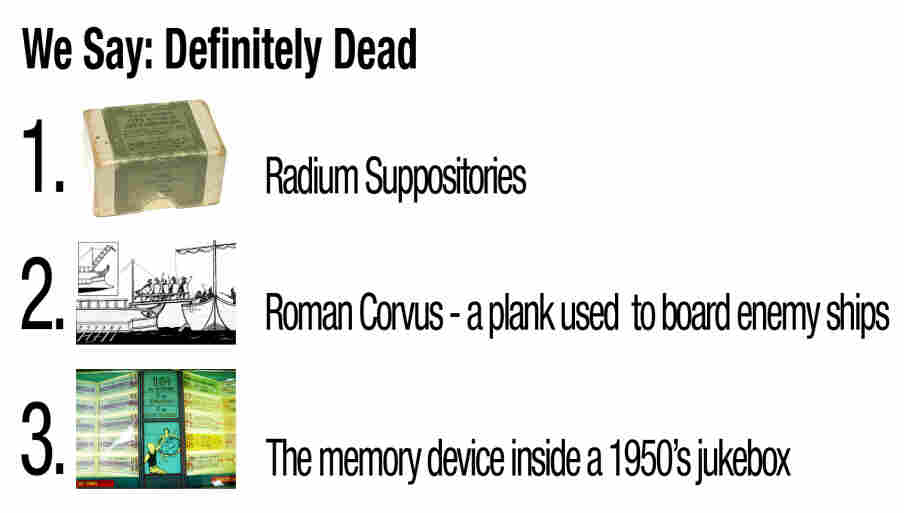 He responded that very afternoon.

"What wonderful listeners you have!" he wrote (not a good sign; I'd hoped he'd open with an apology), and he then sent me to a British website that advertised not exactly a radioactive suppository, but close: 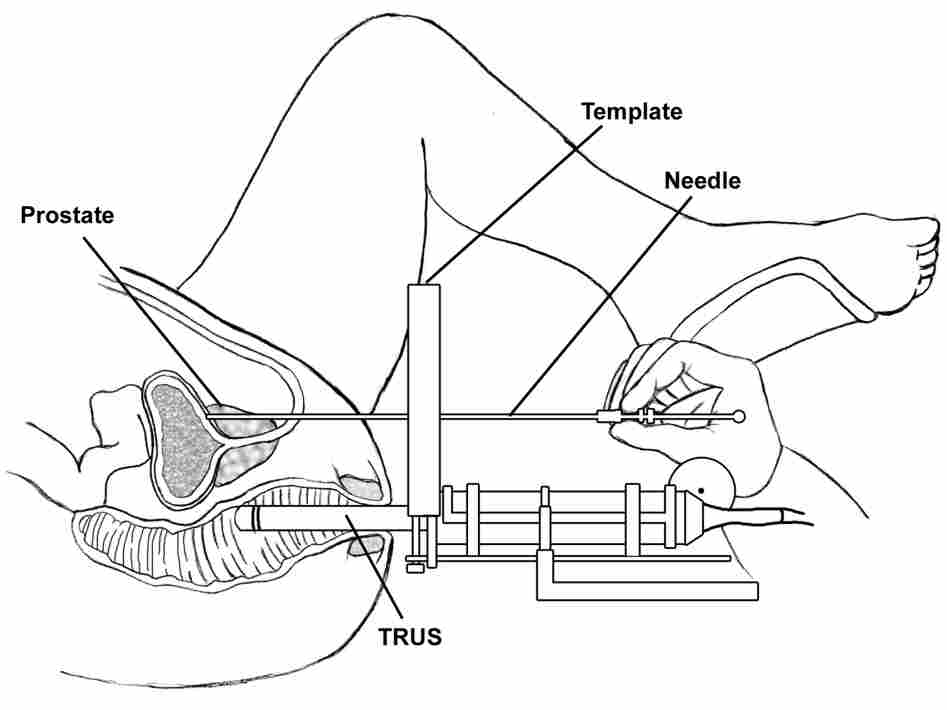 It's a "High dose rate brachytherapy, a contemporary experimental treatment for rectal cancer":

One end of a tube is gently inserted into the rectum. The other end is then attached to a radiotherapy machine and radiation is administered, through the tube, directly into the cancer tissue in the rectum. This causes the cancer to shrink.

Well, it's not a waxy thingy that melts in your butt, but in its way it is a radioactive suppository. So I give him that round.

Next, the Roman Corvus, the ancient plank designed to board an enemy ship."Retractable gangplanks are still in use," Kevin reports. "Usually they are used boat-to-shore rather than boat-to-boat," which is, again, close (though I feel there is a spiritual difference between a plank used to kill and maim your enemies and a plank used to get your poodle safely to the dock) but they do look similar...

So, again, the technology is still being used. Let's see how he did on the last one: the Ferrite Core memory from the juke box...

3. The Core Memory in a Juke Box

He found something being made in Bulgaria that was definitely Ferrite Core technology, but Kevin couldn't prove it's still being made new (Aha!) — and certainly not for a juke box — but the technology, he says, is very much alive in other industries, and, from what I can tell, he's right. 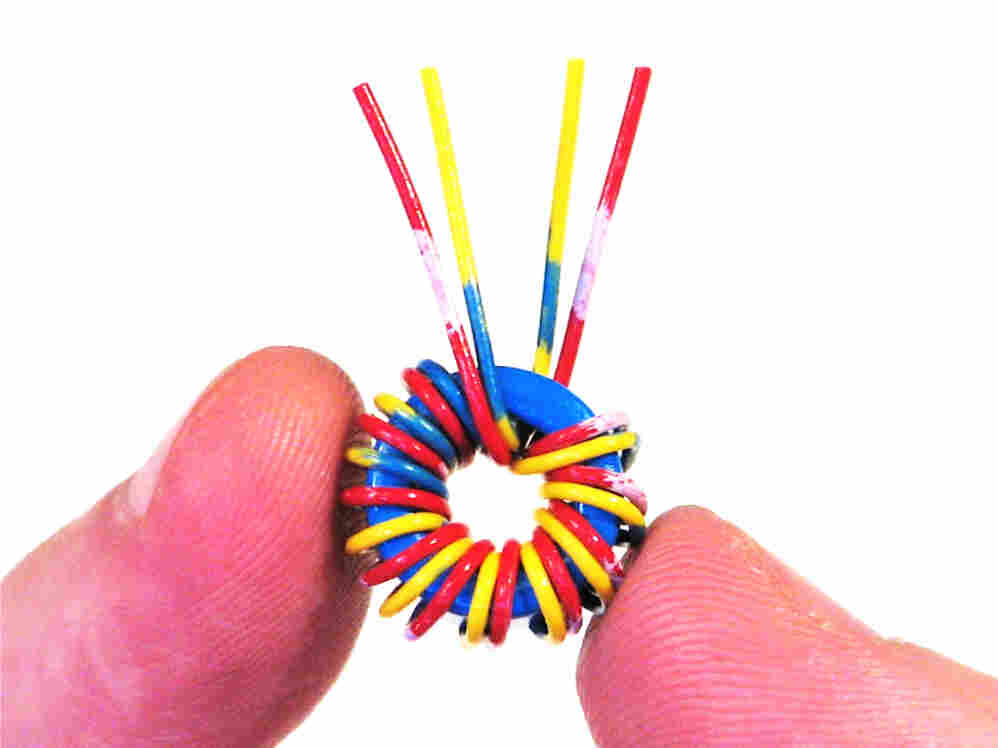 So what Kevin found is not exactly what I asked him to find; the original tool is no longer being made, but the idea, the concept, lives on in new, adaptive forms. Was that our bet?

"Remember," he wrote me a little defensively," I did not say 'no technological device' but rather 'no species of technology' [has disappeared] so my emphasis is on the underlying technology rather than the physical device."

So I guess the first lesson here is when you make a bet with a sharp cookie (and Kevin is nothing if not razor sharp) you should define your terms carefully. He said "there is no species" of tool not being made today. That word, species, is a lawyerly concoction that allows him to call a rubber tube attached to a sophisticated machine a "suppository," which it is — in a broad sense — but not in the very specific sense I meant.

What Have We Learned?

But the deeper lesson of this whole exercise is that — to a degree I didn't appreciate until Kevin forced me to look — technology does indeed persist. Tools, machines, they change, they adapt, they morph, but they continue to be made. I hadn't noticed this tenaciousness before.

Kevin would go further. He has a radical notion, and he talks about it in his book What Technology Wants. He says most living things eventually go extinct. But technology, perhaps, is immortal. 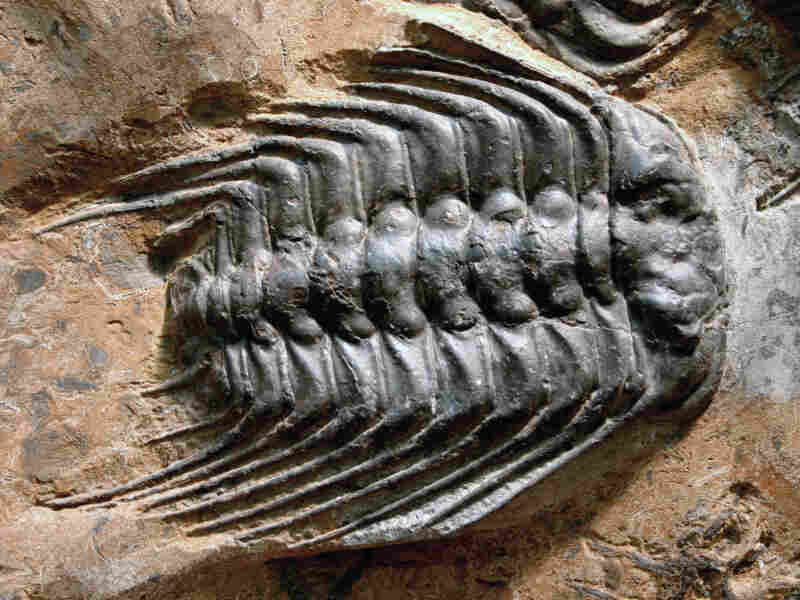 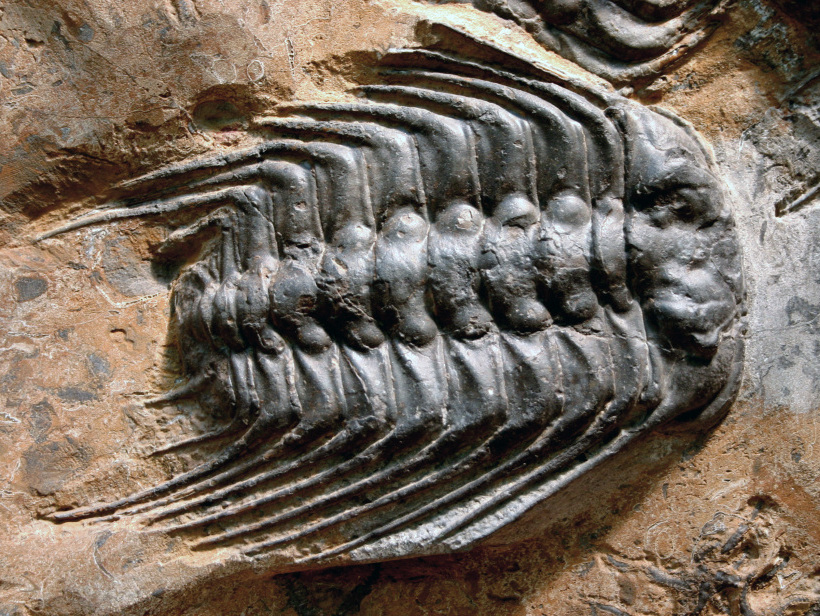 The earth's oceans were once filled with horse shoe crab-like critters called trilobites. They were everywhere. Billions of them. Now there aren't any. They're gone. Kevin suggests that won't happen to our inventions: maybe tools can change, adapt and last forever.

It's a cagey notion. Technology, after all, is the invention of minds, and minds reside in living creatures: us. So if we go extinct, won't our machines and tools die with us? Or will they live on in the brains of our successors, inserted into robot memory or incorporated into not-yet-emergent life form? 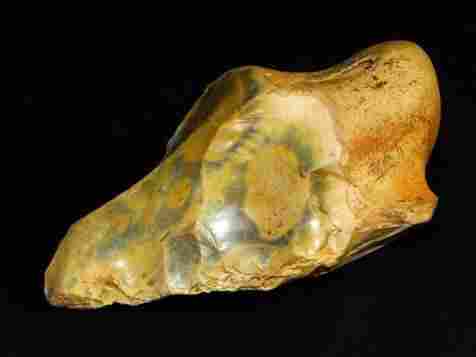 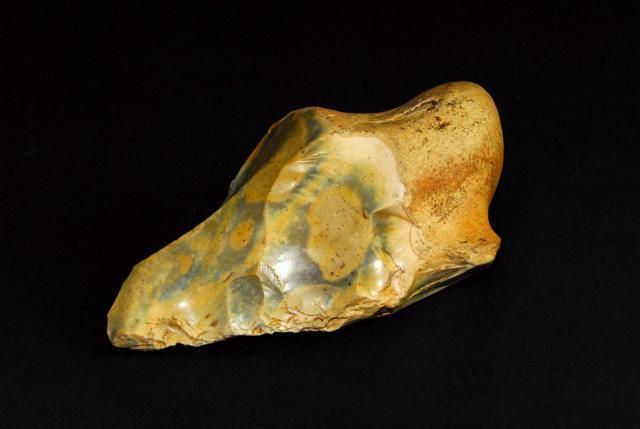 Also when comparing tools to life, the time scales are ridiculously different. Trilobites ranged the Earth for 270 million years. The Paleolithic axe is an infant by comparison, merely 100,000 years old. The homo sapiens who made that axe are only a 200,000 years old. Who's to say that our ideas won't vanish long before the trilobites did?

Jim Gleick, in his new book The Information, to be published a few weeks from now, points out that life and ideas persist for the same reason. Both get copied. Giraffes make baby giraffes, who make babier giraffes, etc. Ideas get copied too. Lennon and McCartney write a tune, that tune bounces from their heads to our heads to our childrens' heads; copies get copied.

To persist, one needs a replicator. Living things use genes, chemical replicators.

Ideas, what do they use? Not chemicals. Richard Dawkins says they leap from, "brain to brain, via a process which, in the broad sense, can be called imitation."

People see a new invention, then they tell friends about it, or they put it onto a cave wall, papyrus, into song, or a book, newspaper, radio, TV, movies, poems, the internet. That way, the invention can be stored and copied.

Life uses genes, technology uses memes (Dawkins' word for an idea that travels through time) and Kevin's radical idea is that memes may be stronger than genes. 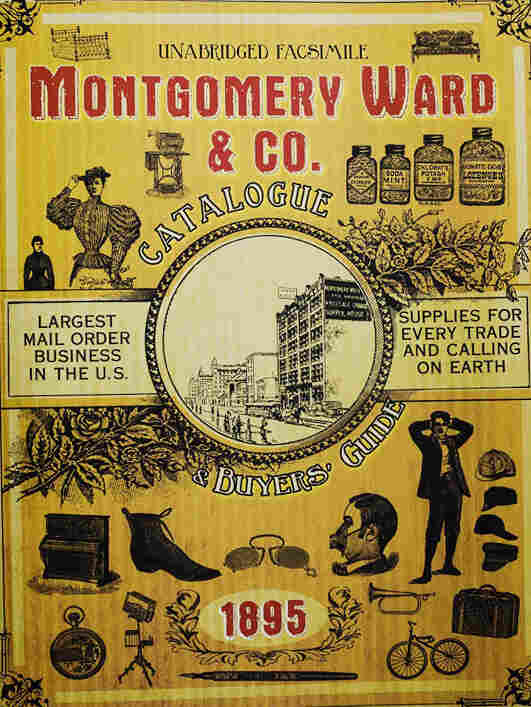 When I was looking through the 1895 Montgomery Ward Catalogue discovering that every corn husker and seeder turned out to be still being made new, I was truly surprised. These designs just keep going. They are viral, infectius, contagious and persistant. So far, they resist extinction.

Why? Why don't people get rid of old ideas? Is it that there are so many people on Earth with different incomes, traditions, religions, enthusiasms that so far, as a young species, we don't need to throw anything away? That no technology is old enough to reach its "sell by" date?

Or is it possible that technology is inherently persistant, that it just won't be thrown out? That's what Kevin is suggesting. That's "What Technology Wants." It "wants" to be copied, to last. I find this idea a bit too mystical for my tastes.

"We Will Persist" Say The Machines

And what if it's true? What if ideas do have a power of their own, who's in charge here? The ideas or us?

Jim Gleick quotes the philosopher/essayist Daniel Dennett: "I don't know about you, but I am not initially attracted by the idea of my brain as a sort of dung heap in which the larvae of other people's ideas renew themselves, before sending out copies of themselves in an informational diaspora...Who's in charge, according to this vision — we or our memes?

Kevin Kelly's new book is What Technology Wants (Viking, 2010); James Gleick's newest book — to be published March 1st — is The Information:A History, a Theory, a Flood (Pantheon, 2011); and our illustrator, Josh Kurz (whose mackerel cans were featured in this space a few weeks ago) sings, reports and designs with Shane Winter on their own blog, Higher Mammals.