Accessibility links
Where Did I Come From? Some Stolen Children Don't Want To Know : Krulwich Wonders... A campaign to reunite Argentinean children kidnapped from their parents in the 1970s is being met with skepticism, as some children aren't sure they want to to take a test that would reveal their ancestry.

Where Did I Come From? Some Stolen Children Don't Want To Know

Where Did I Come From? Some Stolen Children Don't Want To Know

Eight members of the military junta that ran Argentina in the 1970s are now sitting in a courtroom in Buenos Aires. They are accused of trafficking in stolen babies. Those babies are now around 35 years old. Many of them (but as you shall hear, not all) will soon be telling their stories in court. For example: 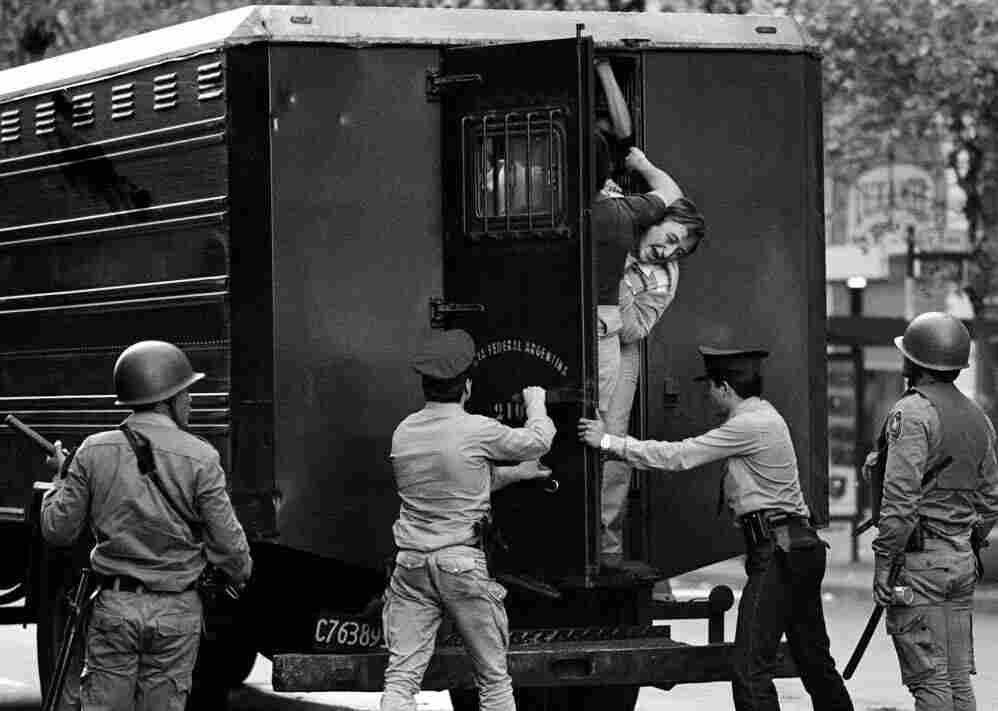 Protesters of the military dictatorship being arrested by special forces of the Federal Police in Buenos Aires, Argentina, on March 30, 1982. Daniel Garcia/AFP/Getty Images hide caption 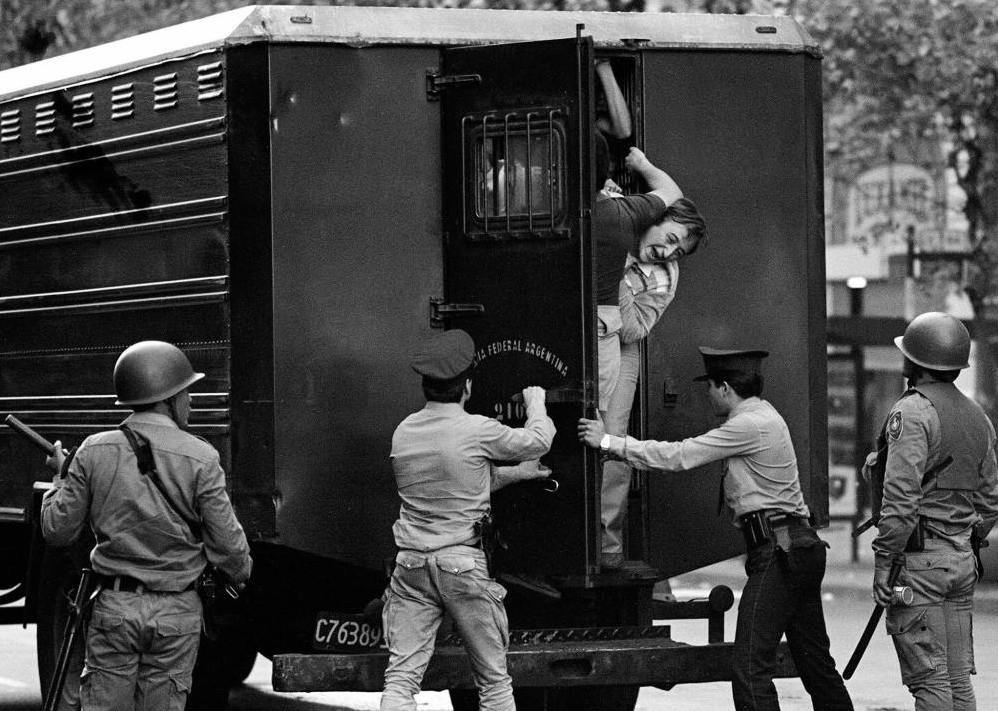 Protesters of the military dictatorship being arrested by special forces of the Federal Police in Buenos Aires, Argentina, on March 30, 1982.

One day in 1977, the Madariagas — a young couple, left-wing activists, living in Argentina — both disappeared, leaving no note, no trace. Their parents went to the police, then to the government for help. They were especially concerned because the Madariagas were expecting a baby. They asked for information. The police had none. This case, officials said, was a mystery. They had no idea where the Madariagas had gone. We now know that was a lie.

During the mid 1970s the Argentine military set up a baby-redistribution network, headquartered at the Campo de Mayo Hospital and the Escuela Mecanica de la Armada in Argentina. Fact-finding commissions have established that the regime systematically kidnapped young parents who expressed left-wing sympathies, then killed those parents, dropping many of them alive from airplanes into the ocean. If the women were pregnant, the regime created maternity wards where mothers were drugged or forced (their hands and feet tied to the beds) to have cesarean sections to accelerate birth. If they survived childbirth, they were murdered. 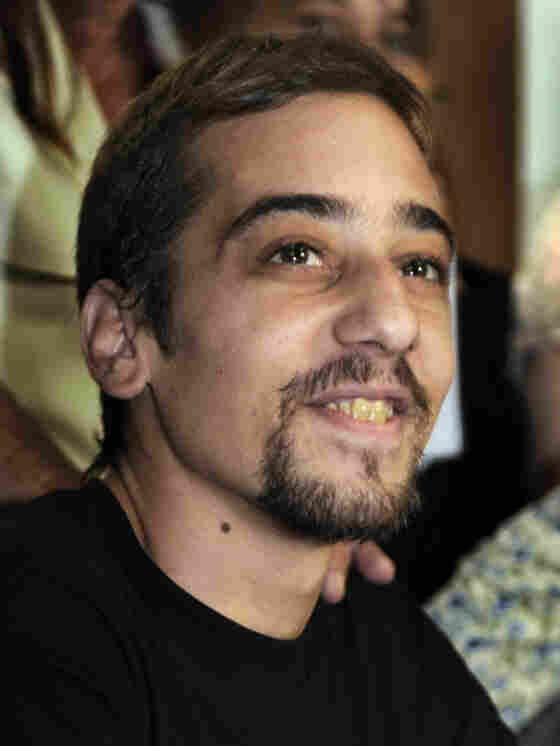 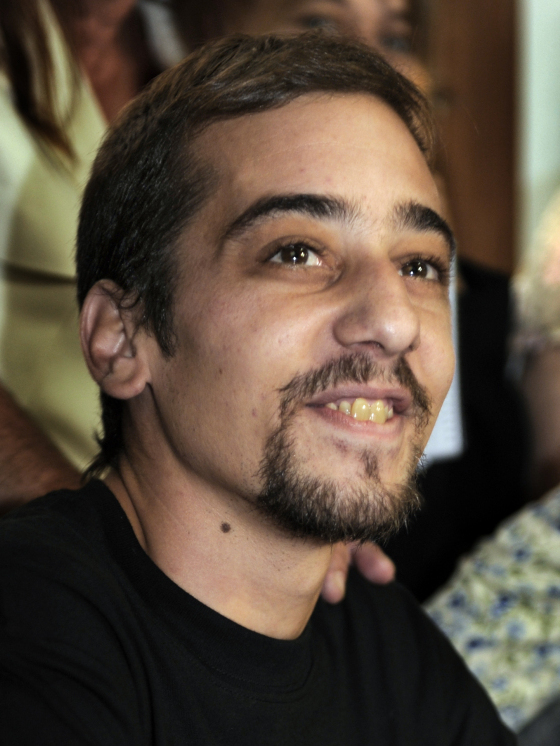 Francisco Madariaga Quintela smiles during a press conference in Buenos Aires on February 23, 2010. Francisco, son of Abel Madariaga and Silvia Monica Quintela, was kidnapped in January 1977 and lived 32 years unaware of his identity.

Francisco Madariaga, we now know, was born at the Campo de Mayo hospital in 1977. His mother is presumed dead. Francisco was then adopted by an intelligence officer at that same hospital. This was not unusual. Children were regularly handed over to police or soldier families more friendly to the regime. That way, the junta would not only eliminate its political opponents; it would steal their children. Kids who might have grown up thinking like their parents would now grow up thinking like their parents' enemies. This was a double erasure.

Francisco was renamed "Alejandro" and was not told that he'd been adopted. He noticed that with his droopy-looking eyelids, his coloring, he looked nothing like his parents. His father regularly beat him. He felt uneasy. "It is something difficult to explain," he told the BBC. "It's like I always knew something was not right."

You Can Take A Test

When the junta was later replaced in the 1980s by a democratically elected government, the parents and grandparents of the missing, or desaparacidos as they were called, began to hunt for their children. A geneticist at the University of California, Berkeley, Dr. Mary-Claire King, helped create a DNA test that would prove with 99.98 percent certainty that a child was the biological descendant of a maternal grandparent.

President Alfonsin and Argentina's Congress then established a National Bank of Genetic Data, which welcomed saliva, hair and blood from grandparents and relatives of the missing children. Genetic profiles of those families are now available, without charge, to anyone whose identity is in question until the year 2050. Hundreds of families immediately contributed specimens. Ever since, Argentines born in the 1970s, if they want, have been able to privately check to see if they are related to any of the couples who disappeared. 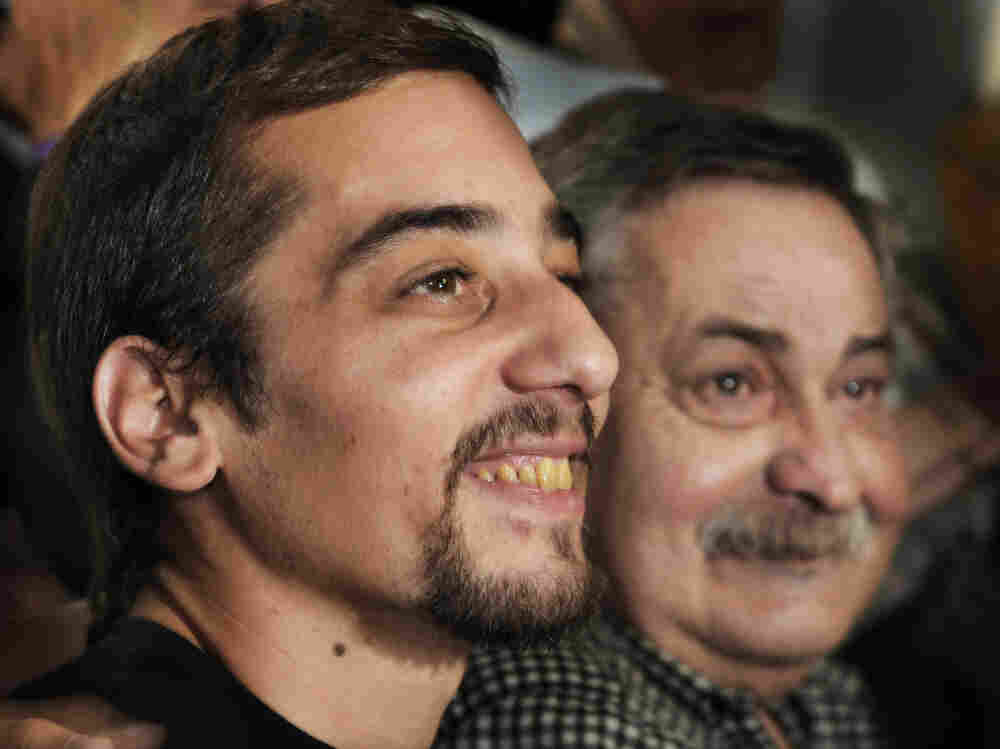 Francisco Madariaga Quintela sits next to his father Abel Madariaga during a press conference, 32 years after his pregnant mother was kidnapped. Daniel Garcia/AFP/Getty Images hide caption 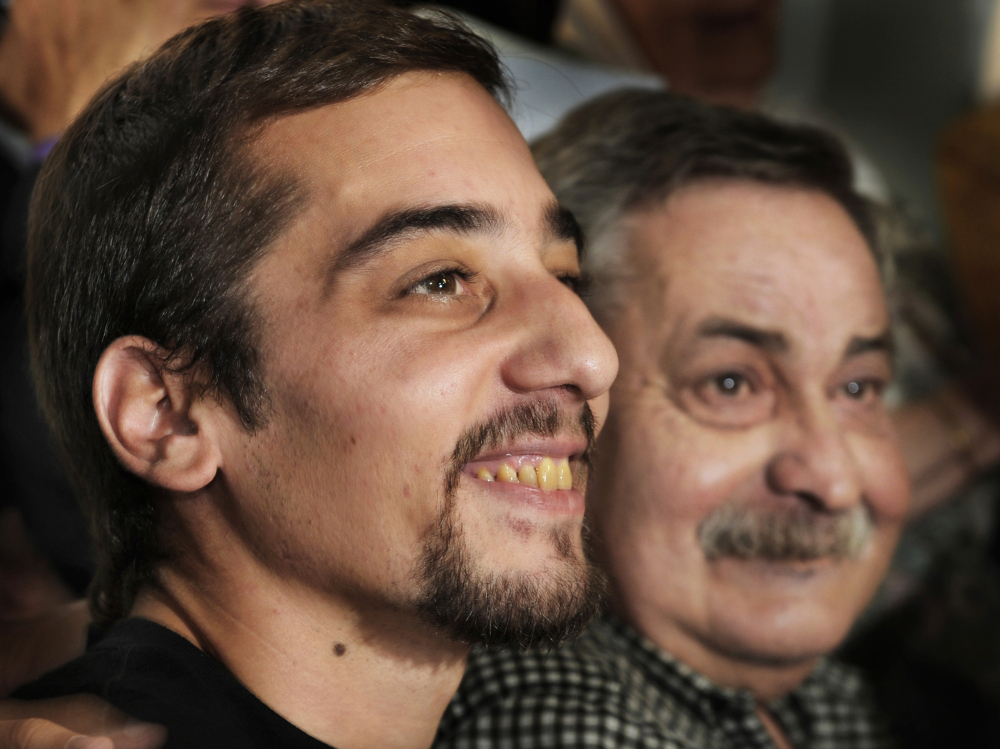 Francisco Madariaga Quintela sits next to his father Abel Madariaga during a press conference, 32 years after his pregnant mother was kidnapped.

Francisco Madariaga took the test, discovered his parents were not who they said they were, and learned that his biological father, Abel, had fled Argentina and was still alive. The two contacted each other and arranged a meeting. "It was the best moment in my life," he said, "I couldn't believe how much I looked like him."

Families, meanwhile continued to press their search for missing relatives. Laws were toughened. If adoptive parents were aware of the abductions, they are now subject to criminal prosecution.

Artists joined the campaign. One exhibit that toured the country displayed a long line of paired photographs. Those photos showed parents who had disappeared, with a mirror in between to represent the missing child. Argentines were invited to look in the mirror and asked, "Does your face look like the mom or dad on either side of you?" 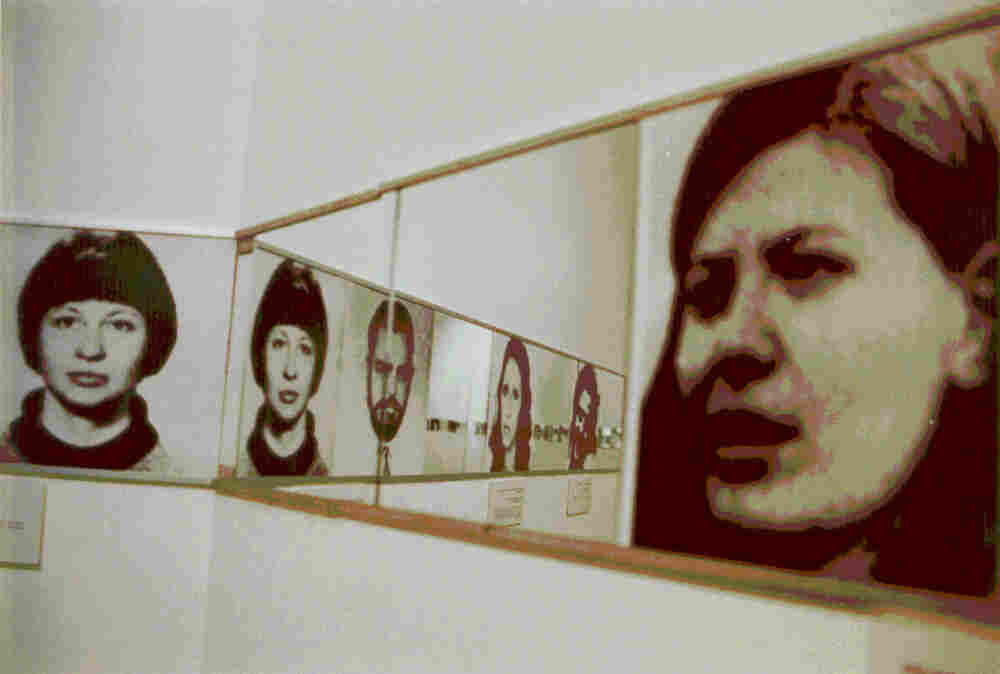 Thousands of people came to see this "Identity" exhibit, and according to museum curator Laurel Reuter, three people figured out "who they were" after seeing the photos.

Colombian artist Oscar Munoz painted faces of kidnap victims on concrete and then filmed those images disappearing (evaporating) under the sun. 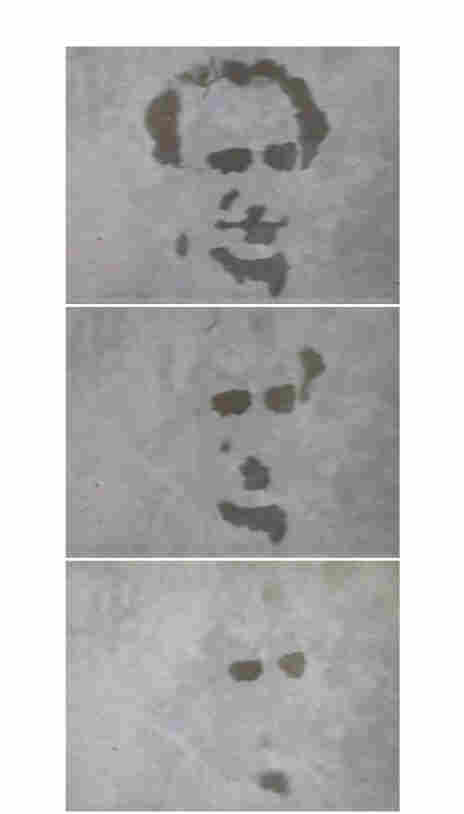 What happens when you discover your biological parents were murdered by the state? Some children are bitter. "I spent 32 years living a lie," Francisco says. "I think I was like a prize of war." He no longer talks to his adoptive father, who was arrested last year for his complicity in the adoption. Francisco expects to testify in the ongoing trial. Other children, however, manage to stay in touch with both their families.

Don't Tell Me Who My Parents Were; I Don't Want to Know...

But there's one case, hugely controversial in Argentina right now, that goes in a very different direction.

In 1976, the first year of the junta, media executive Ernestina Herrera de Noble, owner of several newspapers and cable networks, adopted two babies, a boy and a girl. She signed adoption papers that alleged the babies had been abandoned and left on her doorstep. 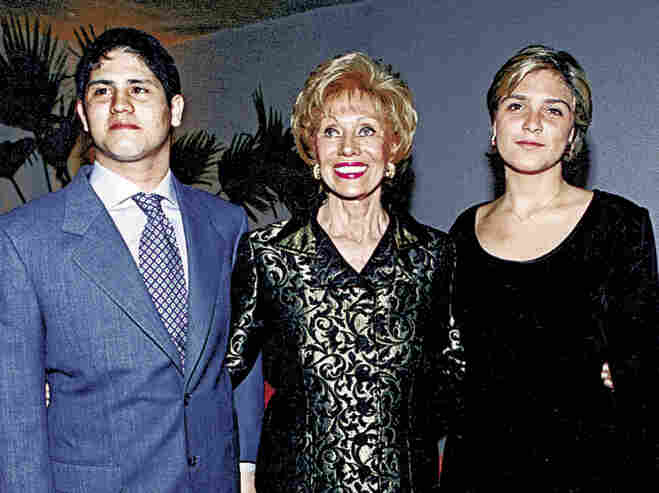 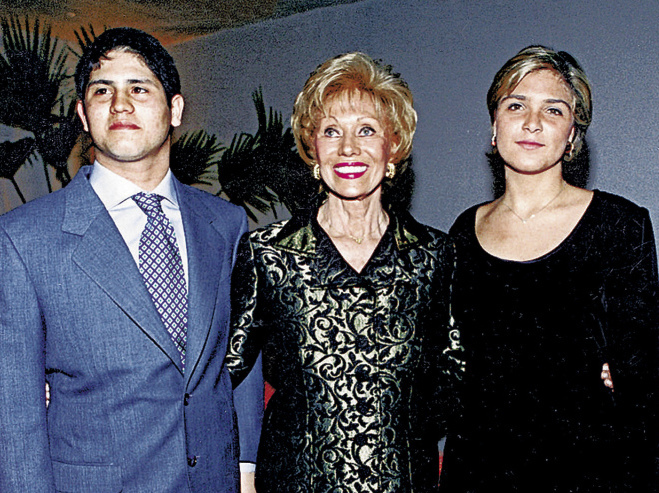 Her children, Felipe and Marcela, are now 35 years old.

Then, a few years ago, the Nobel Prize-winning organization, Grandmothers of the Plaza de Mayo, who represent families with children abducted during the terror, notified Felipe and Marcela that they may be among the 400 stolen children who are still unaccounted for.

Marcela and Felipe refused to be tested. They said they had no desire to know about their biological families. "Our identity is ours. It's a private thing and I don't think it's up to the state or the Grandmothers to come and tell us what is ours," Marcela told The Associated Press. 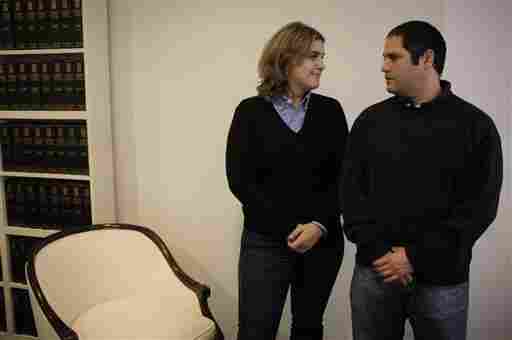 Forcing people to take a genetic test against their will is clearly a serious invasion of privacy. Both children seem very loyal to their adoptive mother. But what about the biological mother's right to find her own child?

After the two children refused to cooperate, the government passed a law authorizing compulsory DNA testing in cases relating to crimes against humanity. Police then raided Marcela and Felipe's home, strip-searched them, seized underwear, toothbrushes and other articles for DNA sampling. The evidence, it turns out, was tainted during the search. The case is still in court. The children have since given blood tests to a private company to share with the families, but they refuse to submit to government testing. Political commentators suggest Argentina's president, Cristina Fernandez, is using the controversy to put pressure on Mrs. Herrera de Noble, whose papers have been critical of the government.

Bottom line: What began as a movement to find abducted babies has now become a struggle between the right to know and the right not to know. The stakes are very high on both sides, because the truth can be so double-edged and so painful. Michael Cook, whose blog about bioethics I admire, sums up with one last case, one I can't get out of my head:

Left-wing political activist Sara Mendez was kidnapped by right-wing soldiers in 1976 and her 20-day-old baby Simon was snatched away and adopted out. "Don't worry, Senora," the commando told her. "We aren't fighting a war on children."

Miraculously, she survived years of prison and torture and began searching for her son. She looked for years. In 1991 she located him, now named Gerardo Vazquez. But he refused to undergo a DNA analysis. She insisted for nine years. Finally he agreed. But he wasn't Simon. It must have been devastating for both of them.

In 2002, after 26 years of anguish, Sara did find Simon. It was a painful meeting, as the young man had just discovered that his adopted parents were not his real parents; his adopted father was not his real father; his biological father was dead; and his biological mother's husband was not his father. For him it was a shattering experience. He severed all ties with the couple who had raised him and changed his name. Who can say whether he was better off now knowing the truth?

I don't know. Different people will probably have to differ on this, but in the end, I find myself almost siding with Francisco Madariaga, who says he just wanted to know the truth about his adoption. For 32 years his adopted family told him lies, he says, "And lies cannot last forever." Well maybe they can. And sometimes maybe they should. But who decides? That's what I don't know.