Accessibility links
The Triceratops Panic: Why Does Science Keep Changing Its Mind? : Krulwich Wonders... Many of us have a hard time understanding that science knowledge is tentative, and what we learned as kids might no longer be true — in some people's minds, Pluto will always be a planet.

The Triceratops Panic: Why Does Science Keep Changing Its Mind?

The Triceratops Panic: Why Does Science Keep Changing Its Mind?

You may have missed it, but last summer triceratops lovers printed t-shirts to defend their favorite dinosaur. I didn't buy one, but a bunch of people did. 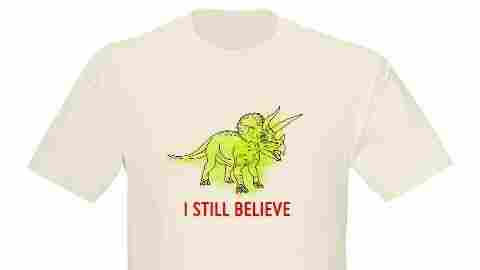 And here's why: People who don't know a lot about science treasure what they do know, what they learned early as children, like:

a) Eskimos have lots of words for snow.
b) Wait 20 minutes after lunch before going swimming.
c) There are nine planets, and the ninth one is Pluto.
d) The biggest dinosaur ever was the Brontosaurus.
e) Triceratops was the one with the three horns.
f) T-rex was awesome.

One of the nice things about growing up is you don't have to spend time thinking about planets, digestion or awesome dinosaurs if you don't want to, because what you were taught was "science" so those things are supposed to stay that way forever.

And then, suddenly, there is "news." Someone in authority says, "Wait a second! New information has come to our attention, and that thing we told you was true may not be true any more. Or not as true. Please pay attention so we can un-teach what we told you."

"WHAT?" is a lot of people's first reaction. "I thought you knew this. I believed you..."
And then they get mad. 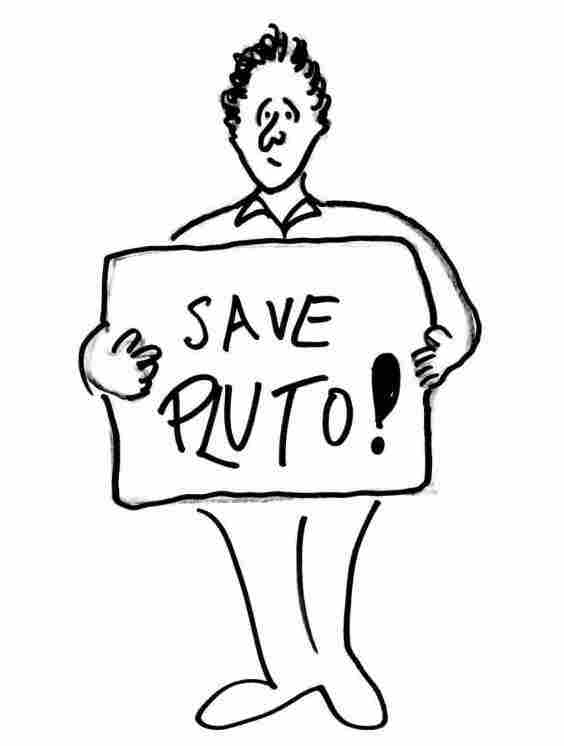 Astronomer Mike Brown of Cal Tech says that, in the days, months and years since the decision [to demote Pluto from planetary status] was made, "I've been accosted on the street, cornered on airplanes, harangued by e-mail, with everyone wanting to know: Why did poor Pluto have to get the boot? What did Pluto ever do to you?"

A hundred years earlier, a very popular dinosaur mistakenly got named twice. The first time it was called "Apatosaurus" or "deceptive lizard" and nobody much cared, because the name was dull and the fossil wasn't all that spectacular, but later discoveries were more dramatic and looked different enough that scientists mistakenly thought they'd found a new dinosaur. They called it "Brontosaurus" (meaning "thunder lizard"). 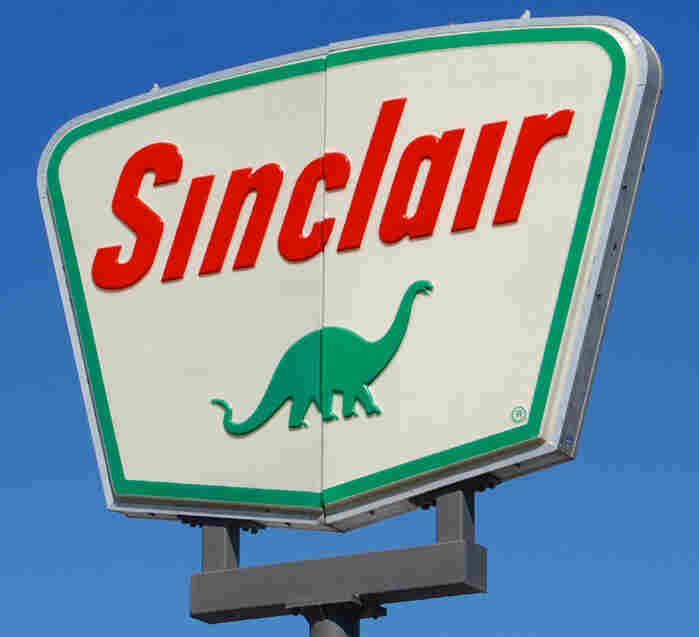 Brontosaurus stuck, in part because of the cool name, plus the Sinclair Oil Company adopted the Brontosaurus as its corporate logo and that long, gangly, smiling "Dino" showed up on TV. Kids got enchanted.

When it became clear that Apatosaurus and Brontosaurus were the same genus, pretty much the same animal, one name had to go. In science the rule is, first names get priority, and Brontosaurus wasn't first. Scientists were willing to let it go, but kids (and former kids) wouldn't. They still won't. 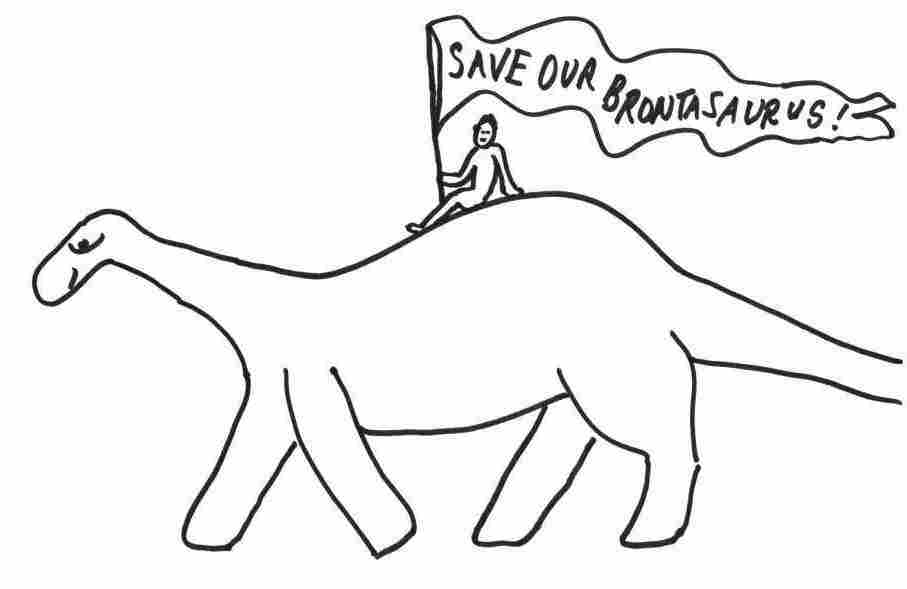 Just this month a blogger who calls herself scicurious (with a Ph.D. from a serious university) recently wrote fellow blogger Brian Switek how mad she was when, at age 7, she was told there's no such thing as a Brontosaurus:

I think it was some older know-it-all kid who told me. I didn't believe it. I read they were the same and I STILL didn't believe it. People were lying to me. Everyone knew Brontosaurus and Apatosaurus weren't the same!!! My model of brontosaurus had a smooth chin. Apatosaurus had a floppy chin like a turkey and some sort of fleshy crest. TOTALLY DIFFERENT (my 7 year old mind probably never figured on the improbability of a floppy chin getting fossilized). Besides, brontosaurus was awesome!!! Apatosaurus was for losers. Brontosaurus sounds better, right? Right??!

Today the real science hipsters, like Randall Monroe who draws the enormously popular XKCD comic strip, are flaunting their loyalty to Brontosaurus, kind of like a Don Quixote who stubbornly won't give up his true love...

Don't You Dare Touch My Triceratops!

And now, most recently, we have the Triceratops Panic. 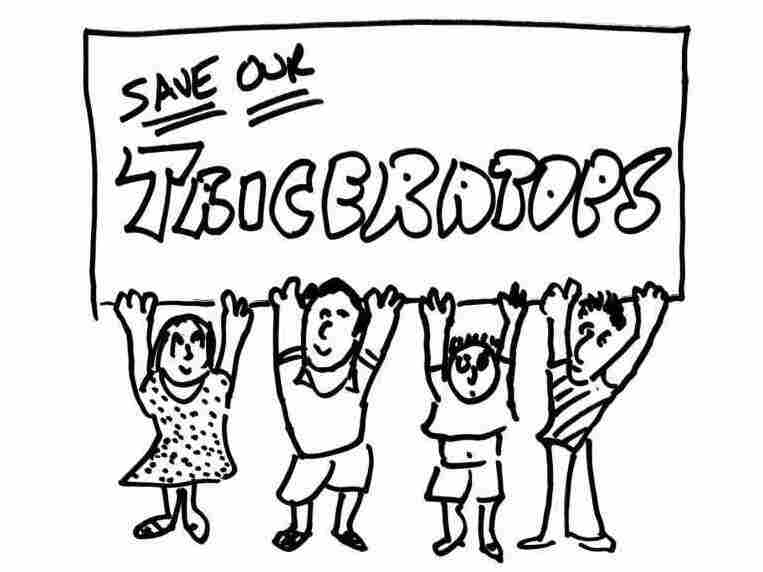 Last summer, Paleontologists John Scannella and Jack Horner suggested that the beloved Triceratops, most recently glorified in The Land Before Time, was not a mature adult dinosaur. It was a young, transitional, teenage version of a Torosaurus, a dinosaur nobody had ever heard of.

As the Triceratops we know and love grew older, Scannella and Horner proposed, its three horns shifted position, got longer, skinnier and a little, well, uglier. Triceratops lovers were not happy. We all know cute teenagers who become less cute adults. But, hey, this was an iconic dinosaur. It's like discovering that Elizabeth Taylor was a youngish phase of a creature on her way to becoming Bette Davis. No, no, no and NOOOOO!, people cried. We want the thing we know as Triceratops to stay a Triceratops! 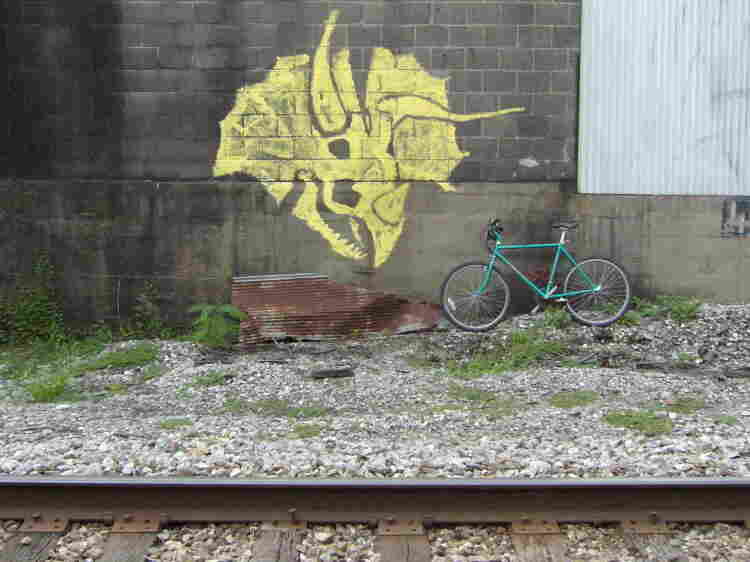 Not that he had to worry. Nobody was going to throw out the name Triceratops, because Triceratops was the FIRST name given to this dinosaur. First names, as we've said, stick in science. So if the Triceratops turns out to be a teenage Torosaurus, too bad for Torosaurus; second names lose to first names, so Triceratops stays. Problem solved.

Except for what this reveals about public attitudes toward science. Brian Switek, on his wonderful blog Dinosaur Tracking, describes how the media portrayed the Triceratops study as a pointy-headed attack on a beloved dinosaur. It's all the scientists' fault, the headlines seemed to say. They're taking away "our" dinosaur:

"Triceratops Never Existed" said the headline from Gizmodo (as did similar ones from CBS News, the National Post, the Baltimore Sun, the San Francisco Chronicle, and Newsoxy), while another one went as far as to ask "Triceratops a Hoax?" In comment sections and on Twitter people have been, well, all a-twitter about the idea that one of their favorite dinosaurs might be taken away...

The lesson here is that when science slips from the academy into popular culture, people love, honor and protect what they know, what they've learned. What they don't understand is all science knowledge is tentative. Something is "true" only as long as the facts support the premise. When the facts change, science has to change with it.

A warning sign to avoid the urge at the Royal Tyrrell Museum in Drumhiller, Alberta. Ricky Romero/Flickr hide caption

People don't want their eternalities to change. They hate that. But, in the end, science has to win. There are 5 year olds all over the world now growing up with Mercury, Venus, Earth, Mars, Jupiter, Saturn, Neptune and Uranus, but not that other guy, the one with the name of Mickey Mouse's pet dog. In fifty years, Pluto may be just a dog again.

That's how it goes.

Professor Mike Brown's stories about the public's reaction to Pluto's de-planetization come from How I Killed Pluto and Why It Had it Coming by Mike Brown, (Spiegel and Grau, Random House, 2010).