Accessibility links
A Cosmonaut's Fiery Death Retold : Krulwich Wonders... Many readers — and space historians — cried out in rage in response to a post last month recounting a new book's take on the 1967 death of Soviet spaceman Vladimir Komarov. Here, we revisit the tale — with footnotes. What really happened?

Last month, I read a book that recounted the horrendous death in 1967 of Soviet cosmonaut Vladimir Komarov. The story amazed me. I described it this way:

"So there's a cosmonaut up in space, circling the globe, convinced he will never make it back to Earth; he's on the phone with Alexei Kosygin — then a high official of the Soviet Union — who is crying because he, too, thinks the cosmonaut will die. The space vehicle is shoddily constructed, running dangerously low on fuel; its parachutes — though no one knows this — won't work and the cosmonaut, Vladimir Komarov, is about to, literally, crash full speed into Earth, his body turning molten on impact. As he heads to his doom, U.S. listening posts in Turkey hear him crying in rage, 'cursing the people who had put him inside a botched spaceship.'" 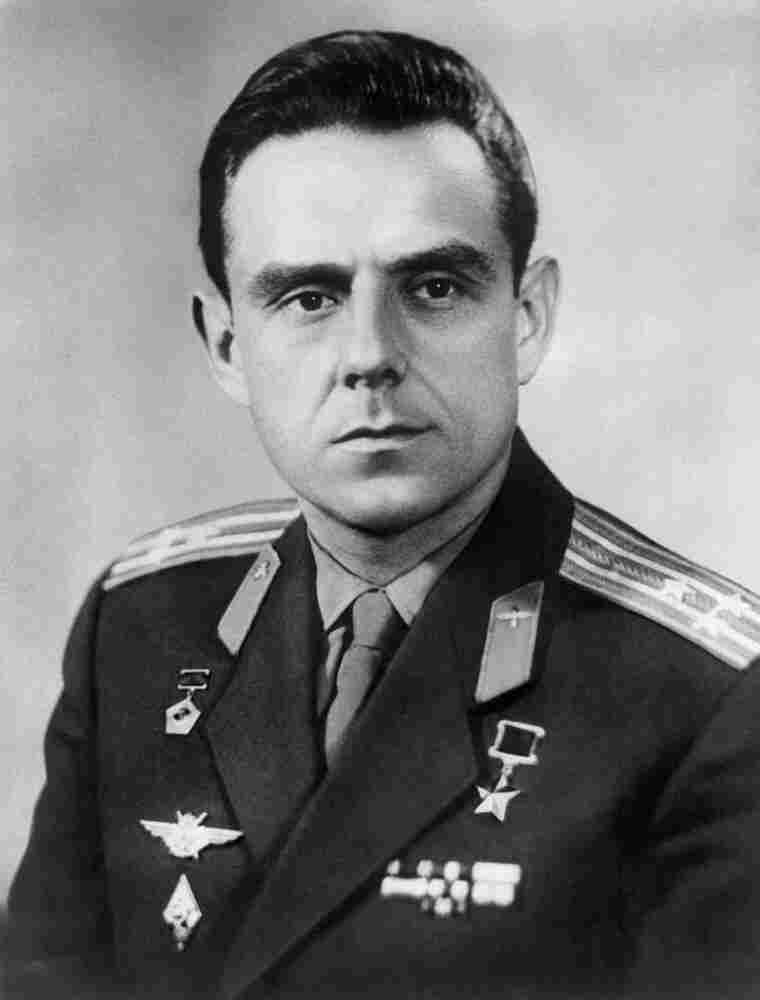 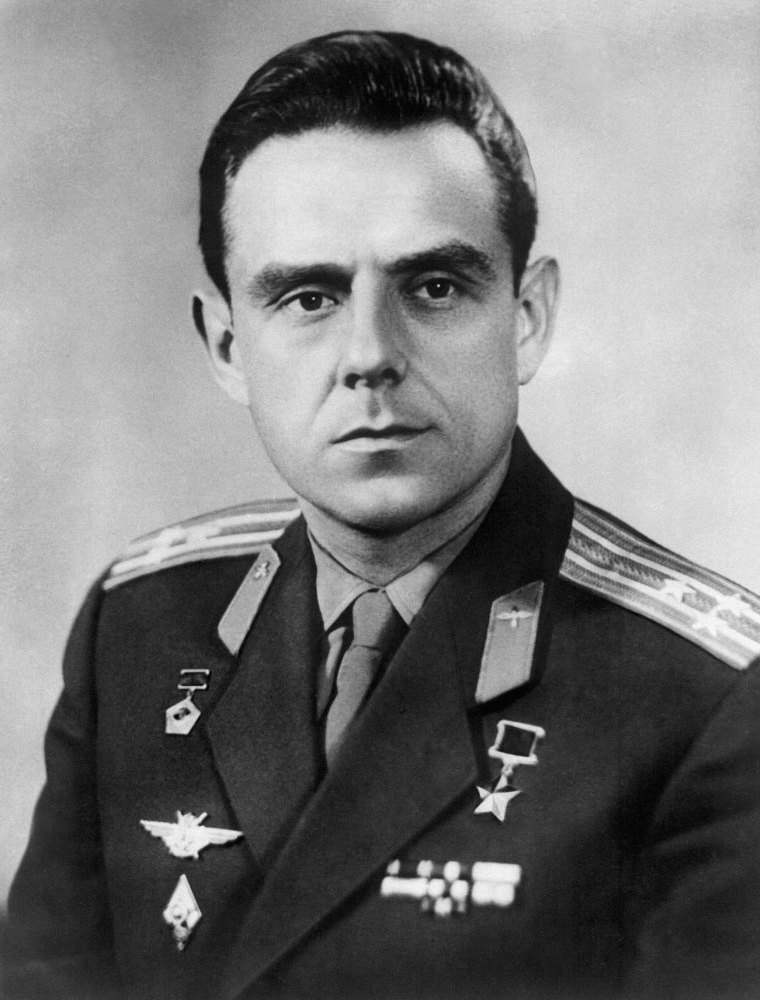 That's roughly the story I read in Starman: The Truth Behind the Legend of Yuri Gagarin, by Jamie Doran and Piers Bizony, a new edition of which was released last month in the United States. In my post, I said, "This version (of Komarov's death) — if it's true — is beyond shocking."

Well, after my post, a bunch of space historians wrote in to say that, in their view, many of the details in this book were either questionable or simply not true. So I invited some of them to send me their objections, which I shared with the authors, and I can now report that everybody agrees the story told in this book needs some revising. Parts of it hold true. Other parts remain in dispute. Some details, the authors freely concede, may be wrong. "Our book," Piers Bizony wrote recently in Space News, "no doubt contains mistakes, and we genuinely welcome corrections of factual errors."

So I'm going to repeat and then amend their riveting story. I'll do it in short chapters, this time with footnotes. It's still a doozie, but not quite the doozie they tell in their uncorrected, republished book. 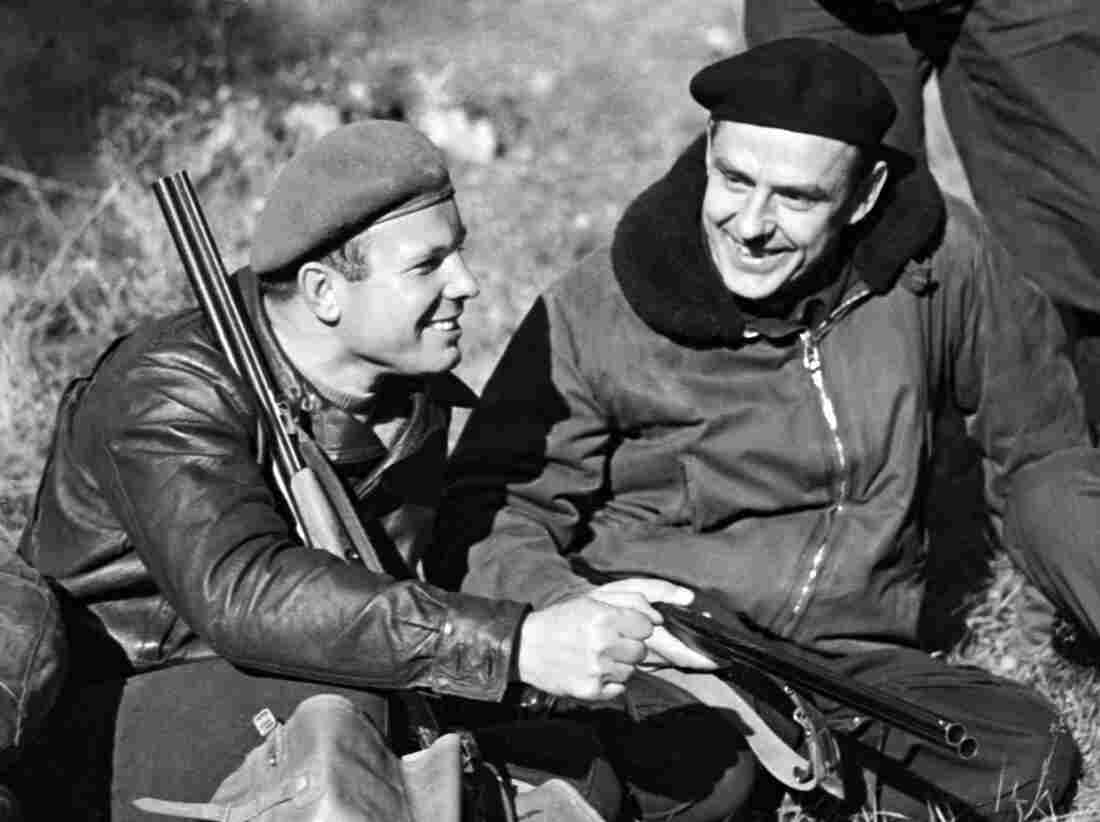 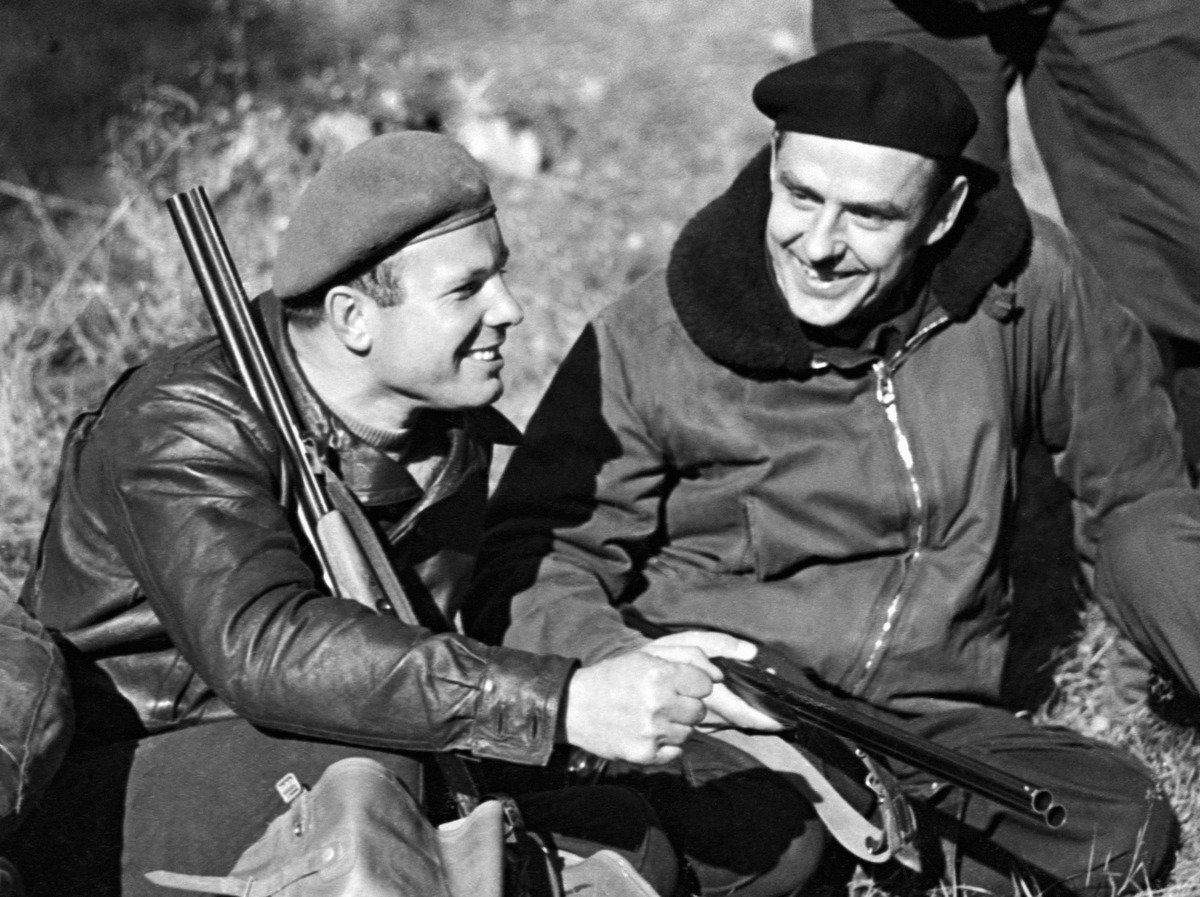 Gagarin (left) and Komarov out hunting

What the book said: We begin with a friendship: Yuri Gagarin, the first human to go into space, apparently had a warm relationship with another cosmonaut, Vladimir Komarov. In 1967, Komarov was scheduled to orbit the Earth in the first manned flight of a Soyuz space ship. Gagarin was listed as the backup pilot. If Komarov couldn't go, Gagarin would.

What we've learned: Critics say the Kremlin was not about to risk Gagarin's life in space. He was, at that point, a national treasure, too important to risk in space flight. So he was "backup" in name only.

What the book said: There was a big problem with this space mission: The Soyuz was not ready to fly. Yuri Gagarin, working with a group of engineers, found 203 structural problems — serious defects that would make the Soyuz dangerous to navigate in space. They recommended postponement. But their memo was ignored.

What we've learned: Critics aren't sure this "memo" exists. It's not mentioned in memoirs or official accounts. Spaceman's authors say in Russia, many things aren't mentioned in print. They have sources.

What the book said: The Soyuz was so unsafe, Cosmonaut Komarov expected to die. "I'm not going to make it back from this flight," he told a KGB agent, Venyamin Russayev. Russayev is one of the most important sources in Doran and Bizony's book. "If you're so convinced you're going to die," he asked Komarov, "then why don't you refuse the mission?"

Komarov answered, "If I don't make this flight they'll send the backup pilot instead. That's Yura (Gagarin), and he'll die instead of me. We've got to take care of him." And then he burst into tears, or as Russayev puts it in a BBC interview broadcast in 1997: "He cracked. Maybe he just let out all the tension, and he began to cry."

What we've learned: Critics wonder about Venyamin Russayev. He was, they say, one of several KGB agents assigned to "mind" Yuri Gagarin. There is no way to check his very personal accounts of conversations he says he had. Doran and Bizony stand by him. "Russayev told us a story that was entirely credible," says Piers Bizony. "We regarded him as a decent and reliable source." One reason they trust him, Bizony wrote me, is that "we were directed towards him by someone impeccably close to Gagarin, whom I cannot name." Others think he's a blowhard who exaggerated to become part of space history.

What the book said: Gagarin was just as anxious to save Komarov. On launch day, April 23, 1967, he showed up at the launch site and demanded to be put into a spacesuit, though no one was expecting him to fly. A Soviet journalist who was there, Yaroslav Golovanov, called this behavior "a sudden caprice." Was Gagarin trying to muscle onto the flight to save his friend?

What we've learned: Critics say this never happened. Gagarin would never demand a sophisticated "space suit" for a mission that didn't require him to walk in space, says historian Asif Siddiqi. The authors agree that the behavior was odd, but they have an eyewitness. In the BBC broadcast, Pravda journalist Golovanov says that Gagarin "demanded to be put into the protective spacesuit" and raised a fuss, "demanding this and this and this..." Was Gagarin trying to postpone the mission or sub for his friend? Golovanov doesn't say. But KGB agent Russayev does. Russayev insists "that Gagarin was trying to elbow his way onto the flight in order to save Komarov from almost certain death." 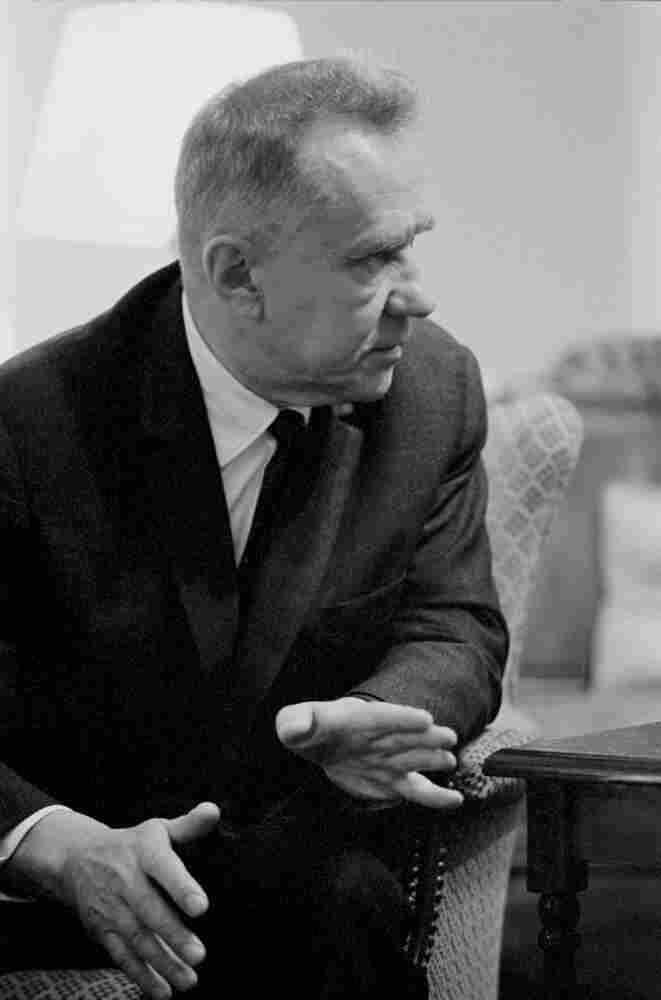 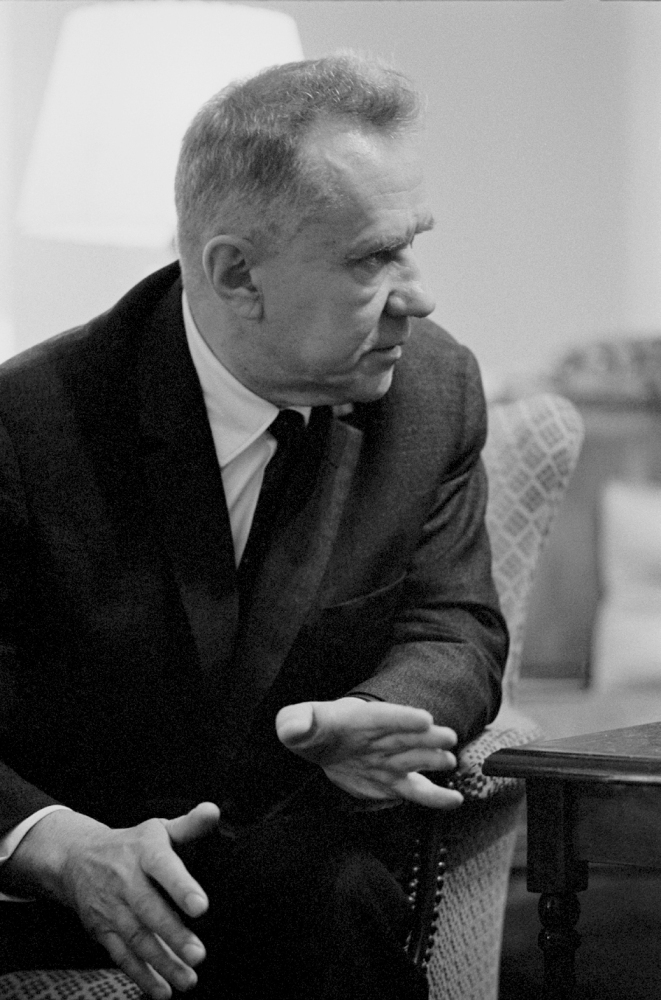 What the book said: At a listening station near Istanbul, American intelligence was monitoring the Soyuz, and according to National Security Agency analyst Perry Fellwock, "They knew they had problems for about two hours before Komarov died and were fighting to correct them. We taped (the dialogue and) Kosygin called Komarov personally. They had a video-phone conversation, and Kosygin was crying. He told him he was a hero. ... They guy's wife got on, too, and they talked for a while. He told her how to handle their affairs and what to do with the kids. It was pretty awful."

What we've learned: My historians find no evidence that Kosygin talked to Komarov in the Soyuz; there's no mention of it in the official ship-to-ground transcripts. Starman's authors seem to be backing away from this crying-on-the-phone scene and from its source, NSA agent Fellwock. "In retrospect, I wish we had downplayed Fellwock's quotations a little more," says Piers Bizony.

Chapter 6: Komarov Dies Cursing 'This Devil Ship!' Or Did He?

What the book said: Komarov was furious as he died. "This devil ship! Nothing I lay my hands on works properly," he's quoted as saying. And as he descended to Earth, the book says:

"Komarov knew he was in terrible trouble. The [U.S.] radio outposts in Turkey intercepted his cries of rage and frustration as he plunged to his death, cursing forever the people who had put him inside a botched spaceship — although his 'final screams,' mentioned later in Fellwock's account, may be an exaggeration."

What we've learned: American historian Asif Siddiqi has a transcript of Komarov's final moments in the Soyuz. He got it from the Russian State Archive. It goes like this: 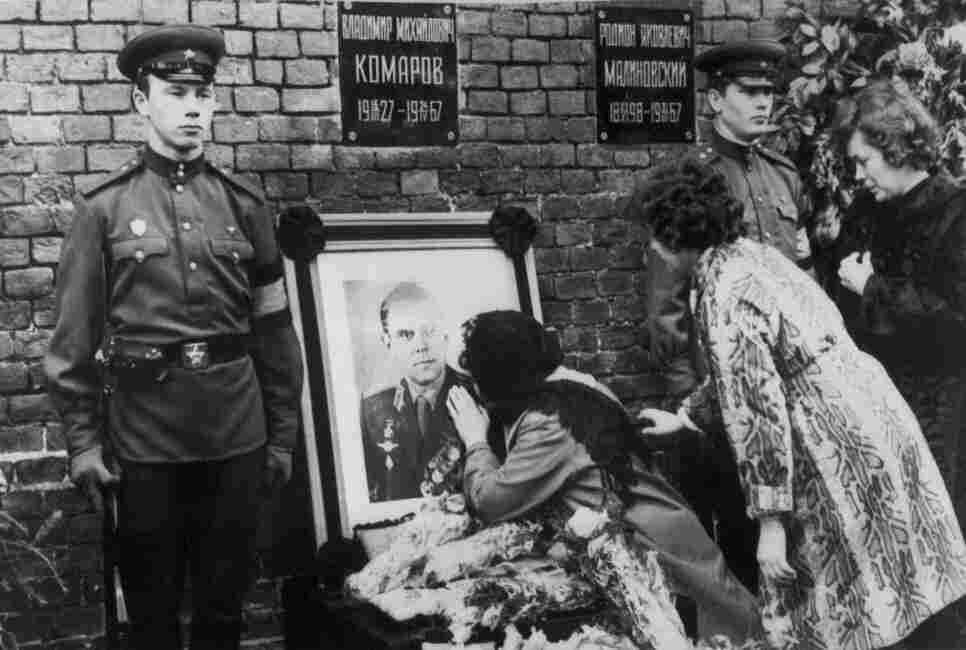 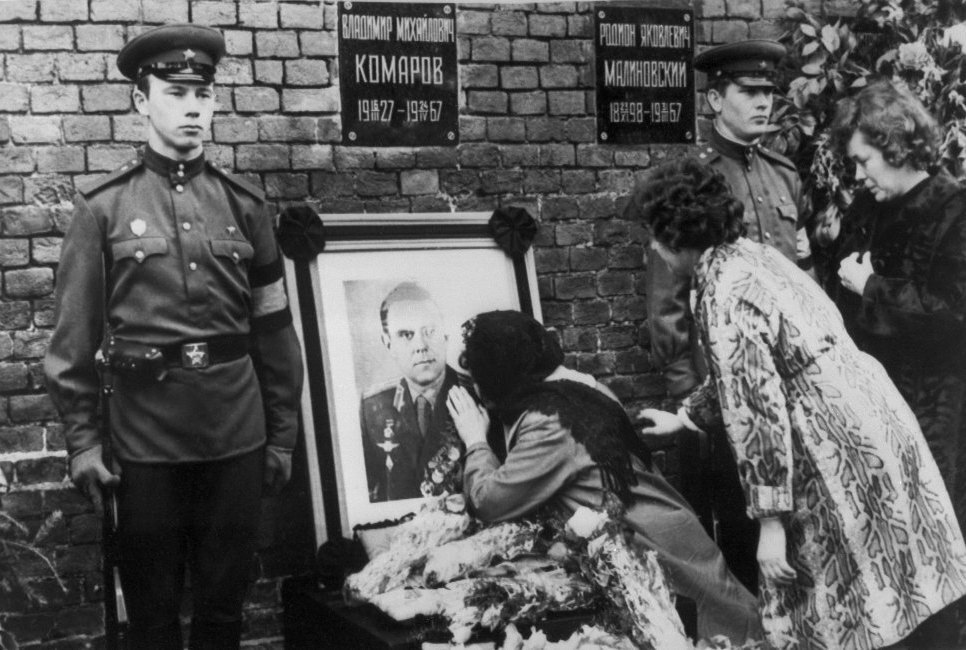 Valentina Komarov, the widow of Soviet cosmonaut Vladimir Komarov, kisses a photograph of her dead husband during his official funeral, held in Moscow's Red Square on April 26, 1967.

Both accounts say that the real cause of death was the failure of the ship's parachutes to open. The Soyuz reentered the atmosphere safely, but the descent was a catastrophe. I asked Siddiqi if he thought his transcript had been doctored. He said, "I'm 100 percent confident the transcripts are genuine," though there may be other recordings from other tracking locations.When I showed it to Bizony, he said, "An official Soviet transcript of anything, from the death of a cosmonaut to the birth of a healthy baby boy, isn't worth the paper it's written on. ... Given that we at least broadly trust Russayev's recollection of events, we are entitled to believe that Komarov, for all his discipline as a cosmonaut, would have been entitled to some spitting madness and frustration."

What the book said: Three weeks after the crash that killed Komarov, Yuri Gagarin met Russayev at his family apartment but refused to speak in any of the rooms because he was worried about bugs. The lifts and lobby areas were not safe, either, so the two men trudged up and down the apartment block's echoing stairwells. According to the book, at one point Gagarin said:

"I must go to see the main man [Leonid Brezhnev, leader of the Soviet Union] personally. ... I'll get through to him somehow, and if I ever find out he knew about the situation and still let everything happen, then I know exactly what I'm going to do." Russayev says, "I don't know exactly what Yuri had in mind. Maybe a good punch in the face." Russayev warned Gagarin to be cautious as far as Brezhnev was concerned. "I told him, 'Talk to me first before you do anything. I warn you, be very careful.'"

What we've learned: Critics agree that Gagarin suffered after Komarov died. But, once again, no one heard this conversation except Venyamin Russayev. If you believe Russayev, you can believe this happened. If not ... who knows?

We know Komarov died. We know the Soyuz crashed. We know a good friendship was interrupted. We know Yuri Gagarin was angry. But because this is a Soviet story, there is so much we don't know. "There are still deep secrets in Moscow archives that we are not allowed to see that could knock our socks off," writes James Oberg, one of America's most important space historians. He just reviewed Starman and he liked the book. "The authors bring up some new material from recently published memoirs from people who have yet to be accepted by space historians (including myself), and perhaps that reluctance is prudent — time will tell," he says.

Or perhaps time won't tell. Sometimes — and I imagine with Soviet history this happens more than sometimes — you can dig and dig, and in the end, you still don't know what really happened.