Accessibility links
Dirty Dancing, A Gallant Spider Goes All The Way : Krulwich Wonders... Male spiders (and males across the animal kingdom) will often court anything that even vaguely resembles a female. One in particular — the jumping spider — has a snazzy technique to catch their mate: dance their hearts out.

Dirty Dancing, A Gallant Spider Goes All The Way

Dirty Dancing, A Gallant Spider Goes All The Way

Before I break your heart with a magnificent demonstration of naked, forlorn, magnificent passion, I should tell you a thing or two about the male jumping spider. 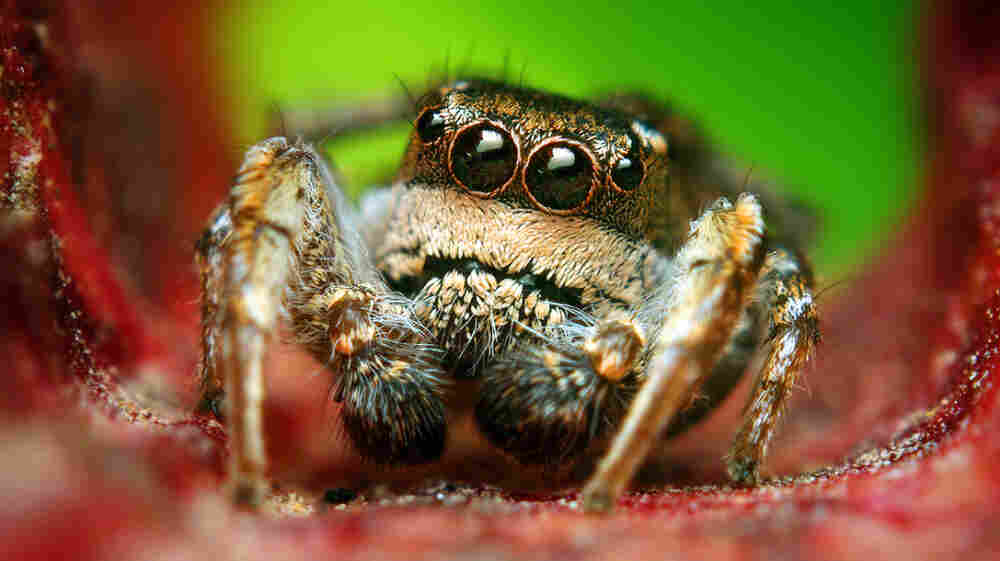 These spiders dance when they woo. Here's a quick, silent introduction showing their basic moves: We start with a flourish of side-to-side quicksteps, then two front legs are fully (and repeatedly) extended like a referee signaling "touchdown!"...

This, apparently, is what spider ladies like. The more the male spider shakes, vibrates and extends, the more the female will consent to copulate. I don't know if that "leg snap" thing is the move that gets them over the top, but males who have been "muted" (waxed so they can't dance) frequently get eaten by their intendeds. So if you're a male jumping spider, it's best to dance your heart out.

Which is exactly what our next spider is going to do. And oh my, does he do it grandly.

To inspire his dance, Professors Wayne Maddison, Damian Elias and their team found an alluring female, and with soft wax attached her to a wire so she could be released later. The study said she was anesthetized with CO2, so she's on the quiet side. But he ... he starts with some delicate taps, then some snaps, pops, then flexes that come faster and faster; then he adds this weird grinding buzz that sounds like a growl, all the while creeping closer and closer.

There is something about these male dancers you don't want to know, but let's save that for later. Right now, understand this dance is meant to be heard by the lady so the researchers have amplified the vibrations. Make sure you turn up the sound (recorded using a piezo-electric sensor placed directly underneath the female, so we're hearing what she's hearing ...) and try not to blush.

Yes, this video ends rather suddenly and Martin Brummell thinks he knows why. Brummell is a professor at the University of Saskatchewan who writes very entertainingly about biology on his blog.

Brummell says he was at a science conference and happened to hear a talk by Wayne Maddison, one of the scientists who produced the video. In that talk, Maddison apparently reported that for all his thumping and buzzing and scraping, including that splendid series leg leaps at the end, our spider was never going to get what he so ardently desired because the female in this particular scene was not, as the paper said, "unconscious and restrained." She was dead.

Not that the male spider noticed. Brummell says in the extended version of the video, our male went on to bash his head against the insect pin that had been stuck through his lady's thorax. He didn't notice the pin either.

"Guys!" I hear the ladies saying. 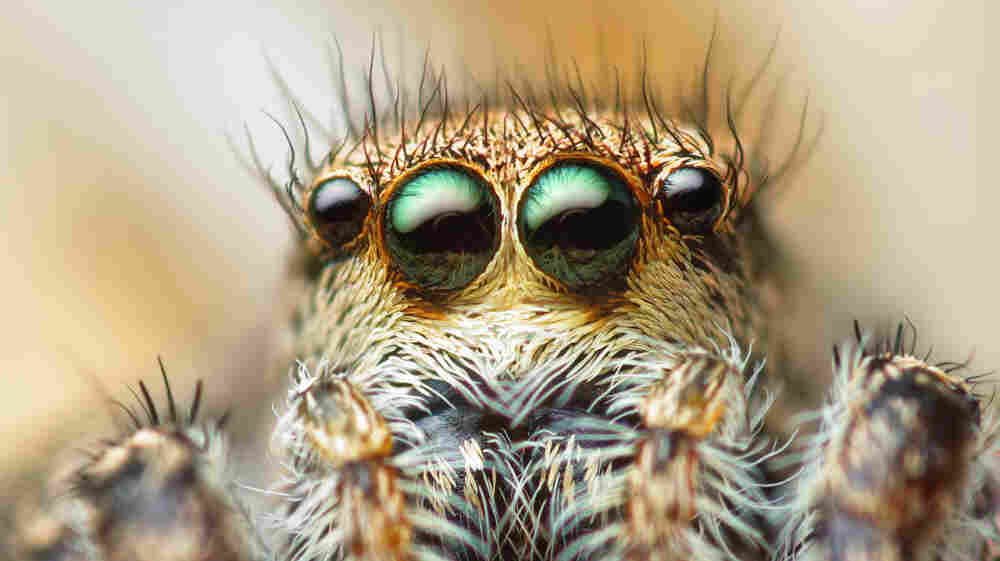 Come on! say I; can this be true? No animal is that dumb. So I called professor Wayne Maddison and professor Damian Elias (the two lead scientists on this paper and producers of the video) and they said, alas, this happens all the time. Jumping spiders will dance for dead ladies, freeze-dried ladies, ladies pickled in alcohol, cardboard versions of ladies with paper arms and legs, ladies that aren't their kind of spider, but both insisted the lady spider in our video, the video we just saw, that female was alive, (drugged, yes, but otherwise unharmed). She just didn't move much.

Here's the point. Male spiders (and males across the animal kingdom) will often court anything that even vaguely resembles a female. Jumping spider males are splendid lovers, but not careful choosers. Professor Elias says they don't see that well, but man, can they dance! And watching the male in our video, who moved with such grace, such ardor, such blind fervor, how could you not admire his ... his unbelievable confidence ... just a little?

Thump! Scrape! Buzz! How they make those sounds. 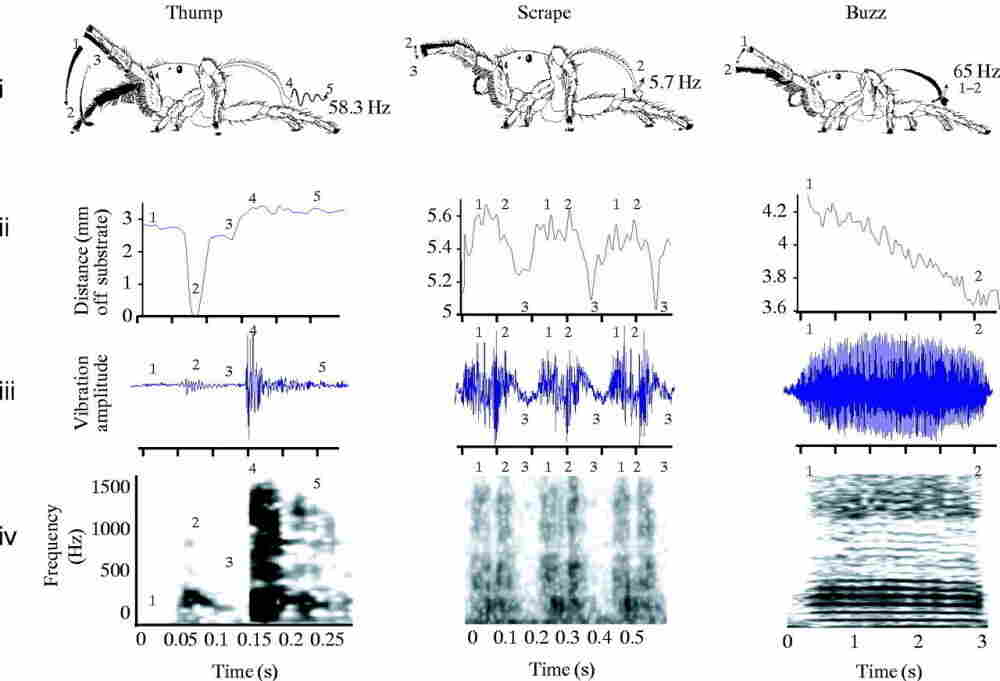 Enlarge this image
The Journal of Experimental Biology 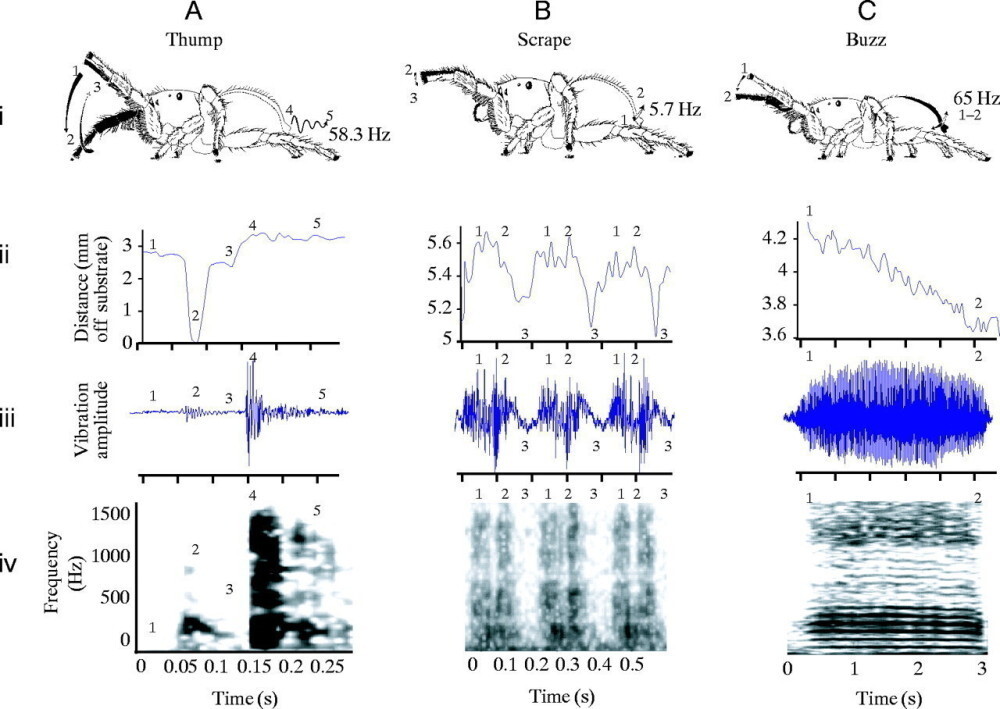 The Journal of Experimental Biology