Accessibility links
Cinderella's Ball, This Time With Pendulums : Krulwich Wonders... Fifteen free-swinging globes suspended from a board create a scientific dance that appeals first to the heart, and then to the head. Physics has never looked this beautiful.

Cinderella's Ball, This Time With Pendulums

Cinderella's Ball, This Time With Pendulums

What we have here is better, more cunning and a damn sight more beautiful than magic. It's a pendulum dance. 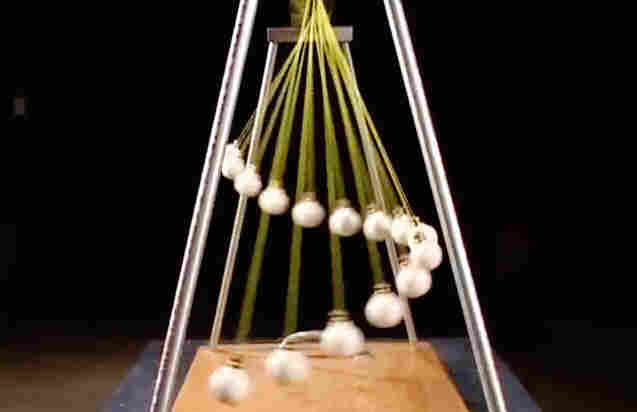 A team at Harvard built this device. It's got 15 free-swinging pendulums, each a different length.

The longest one does 51 swings a minute.

The little guy down at the end does 65 swings a minute...

Once they're set swinging, the balls form a line, then quickly fall out of sync and, as you watch, patterns emerge out of nowhere, snakes, squiggles, spirals. At the exact midpoint (57 seconds in on the video), half the pendulums are at one "amplitude maximum," the other half at the other "amplitude maximum," like ladies and gentlemen at a palace ball. You can almost see them curtsying and bowing.

But here's the sly part.

There are secret choreographers in the house: Time and Motion. The Harvard design team has built the device so the pattern repeats every 60 seconds. Precisely. This dance, like Cinderella's ball, has a fixed end point.

You can see this yourself by sliding your cursor to the 27-second mark on this video when the pendulums are released (I want to say pendulii, but spell check keeps shouting "no!"). At 1:27, exactly a minute later, all the balls are right back where they started. Exactly. Same formation. And then the dance repeats. Very cool.

The joyful team that did this (I shouldn't be squealing, because they'll be swamped with wanna-be interns) call themselves the Natural Science Lecture Demonstration team. They supply Harvard professors with razzle-dazzle show & tell machines to use in their science classes. That's really what they do.

Wolfgang Rueckner, one of the four full-time "managers," told the Harvard Crimson: "We have close to a thousand demos," some of which you can see here.

Most are simple constructions, things that ordinary folks could do at home. Mr. Rueckner has an ordinary PhD in atomic and molecular physics.

But while he may be a pretty smart guy, he's designing for the heart first, then the head. "We hope to add to the educational experience and make these scientific concepts more understandable," Rueckner says. "We're doing it visually and experimentally, hopefully with a little flair, and humor and showmanship so that it can be remembered."

I'm definitely remembering this. I might even (I'm not saying I will, I'm just saying I might) try to figure out the physics that makes it happen.

For those of you who are now intrigued, the Harvard site is chock full of ohmygod! videos, including one where a guy named Allen is placed on a bed of nails, covered with another bed of nails and someone then pounds on this nail sandwich with a huge sledge. Geez. The question posed is why isn't Allen in pain? Good question. Especially when we watch Allen get up, dust himself off and say, "That was fun."