Accessibility links
A Mouth I Can't Stop Thinking About : Krulwich Wonders... An ancestor of the elephant had a shovel-like jaw and huge front "teeth." These bizarre-looking creatures developed this mouth as they aged — but scientists haven't figured out why ... yet.

A Mouth I Can't Stop Thinking About

A Mouth I Can't Stop Thinking About

What ARE these creatures? Come on, these can't be real. 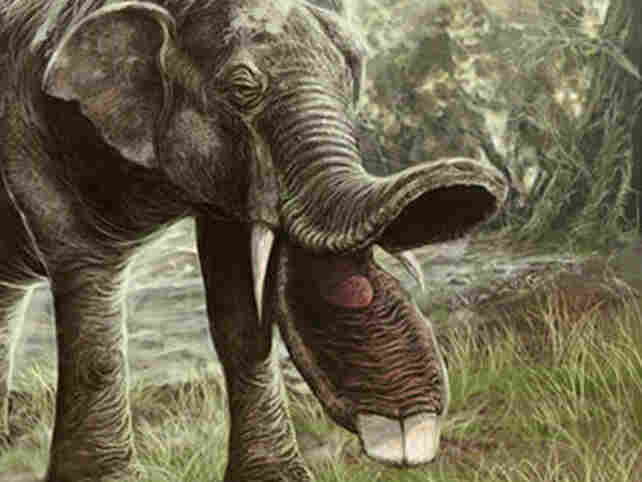 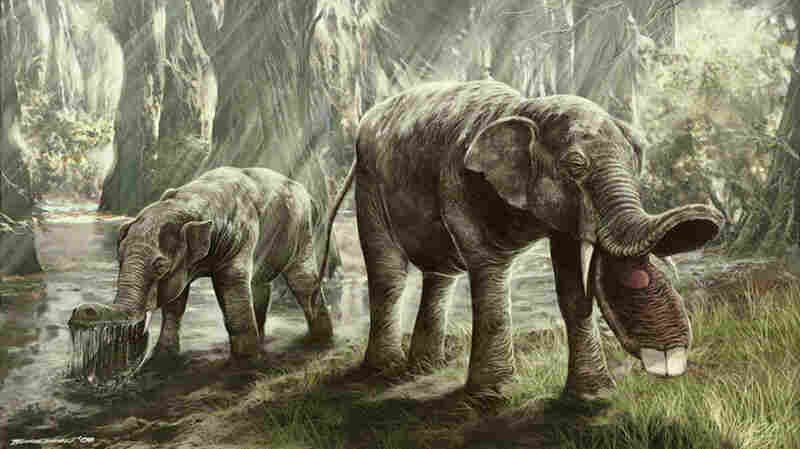 What we have here is "Sk00tie's" (also known as Polish artist Tomasz Jedrzejowski's) rendering of two Platybelodons on a sunny day about 10 million years ago doing a little "shoveling."

They've got the mouths for it. Platybelodons were a very early form of elephant (order Proboscidea) that wandered across Africa, Europe, Asia and North America doing something — we're not sure what — that caused their mouths to turn into scoops capped by two protruding looking "front teeth." They are wonderfully ridiculous looking; it's like their trunks had a bad encounter with a steam roller.

They weren't born this way. Baby Platybelodons (we have a complete set of fossils showing them at a variety of ages, all from a site in China) didn't have dramatically flat, scoopy lower mouths as infants. As they got older, their mouths changed shape.

What were they doing? Eating, presumably. But what? 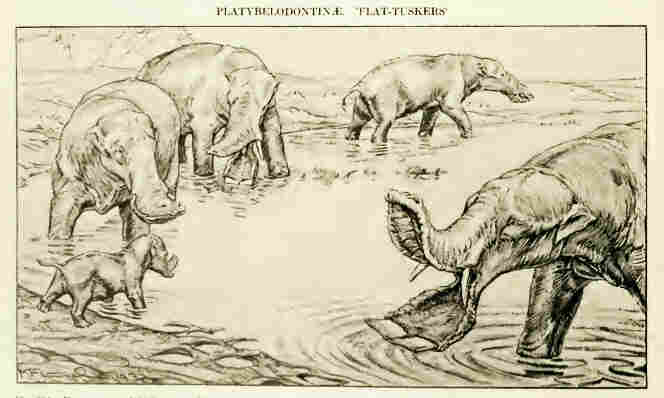 A family outing. Courtesy of The American Museum of Natural History hide caption

toggle caption
Courtesy of The American Museum of Natural History

The obvious answer, thought the American Museum of Natural History paleontologists who first described them in the 1930s, was they'd stick their lower jaws into a pond rich with juicy mud, dig down, scoop up all kinds of deee-licious water plants, throw up their heads, chew, swallow and ... burp. 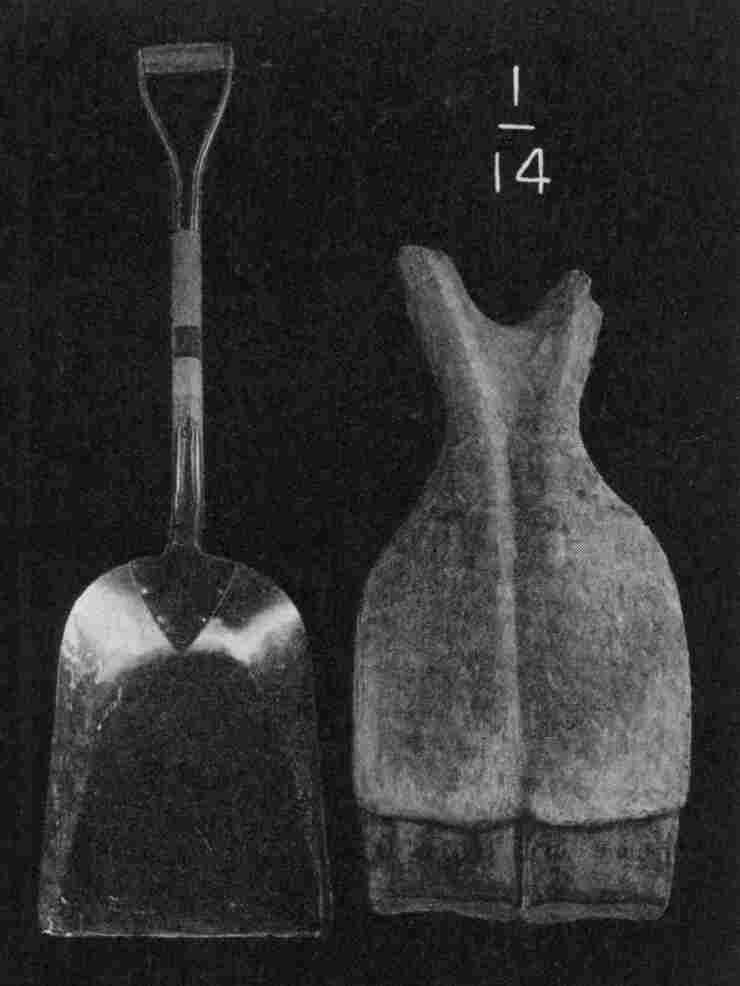 toggle caption
Courtesy of The American Museum of Natural History

That would explain the shovel-like shape. Brian Switek, who wrote about these animals on his blog Laelaps, found an early photograph that literally compares the end of a Platybelodon jaw to a shovel. The tool and the jaw start narrow, then broaden in the same way.

Plus, paleontologist Henry Fairfield Osborn found dental evidence, from those two squared-off incisor teeth at the mouth tip, that Platybelodons were very likely scooping up vegetation.

For 60 years, that's how matters rested, until a younger paleontologist, David Lambert, came up with a wild alternate explanation.

In his 1992 Paleobiology paper, Lambert looked more closely at the teeth, found what Switek calls "bevel marks" that suggested maybe Platybelodons didn't scoop food from shallow ponds (which were not all that plentiful anyway), but instead would grab onto trees with a flexible trunk, yank the branches and rub the wood onto those teeth and saw! 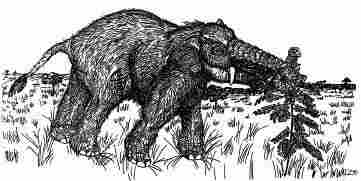 Courtesy of The Paleontological Society

If that's true, this was a lumberjack animal, sawing through tough plants with its two beveled teeth.

But no one knows for sure. There are so many ways to explain how an animal got a mouth like that, and scientists are just beginning to explore the question. So why don't I leave you alone for a minute with your own Platybelodon? The one in this video, animated by Dean Cameron Reynolds, will wink at you, then walk on air, then try to hit you with his front teeth, then leave you in a gravitationally impossible manner ... all in 32 seconds.

Ignore the fly that shows up at the end. It's got a face that looks like a squid. A subject, perhaps, for another post.