Accessibility links
Calvin, Hobbes And Comic Book Biology : Krulwich Wonders... Two artists defy the laws of Cartoon Land, and imagine a world where the stars of beloved comic strips are all grown up.

Something isn't right here. There are creatures among us — a puppy named Snoopy, a boy named Charlie Brown, a wild dagger-haired tempest called Calvin — who don't ever, ever, ever grow up. They're not allowed.

They come from a corner of the universe where puppies, boys and tigers live and dream until the day whoever created them says, "enough." After that, they don't die (at least, not in the usual way,) they get recycled and go on forever. 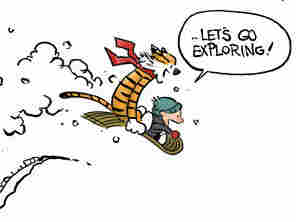 An artist's rendering of the original Calvin and Hobbes characters, which were created by Bill Watterson. Courtesy of Pants Are Overrated hide caption

There is, in Cartoon Land, a biological law that says for these creatures, there is only one season: forever puppy, forever boy. Calvin can't grow up because for him time doesn't tick in the usual way. His days follow days as ours do, but his years don't multiply. We know that, he doesn't.

Which brings me to Dan and Tom Heyerman. These guys (they are brothers) write and draw comics on their blog, Pants Are Overrated. In total violation of Everything That's Sacred, (and to the delight of many Calvin and Hobbes fans), a couple of weeks ago they, very briefly, brought Calvin back...as an adult! Their Calvin is 26 years older than his former, original self. Not only that, he has a kid, a daughter named "Bacon" (named for the Enlightenment philosopher, Francis Bacon.)

This is a dangerous, dangerous thing to try. But Tom (who draws) and Dan (who writes), come remarkably close to capturing some of the original magic...

Oh, there are a few bits I could argue with. Calvin and Hobbes' creator Bill Watterson would probably not have stuck in that Donald Trump reference. The drawings, though...my, they're good. I wondered if the woman who shares Calvin's bed might be Calvin's neighbor Susie Derkin, which makes absolutely no sense because Calvin and Susie hated (and wildly flirted with) each other, but when I looked at this second strip...It IS Susie!

The problem is not that these cartoons are badly done. On the contrary, if you look at a spate of Calvin-As-A-Grown Up drawings collected by Gerry Canavan and posted here, the Heyermans version is probably the best.

The problem is me. I just watched my youngest daughter graduate college (this past weekend) and when you sit on your folding chair watching your daughter turn into a full-fledged, strong, out-in-the-world adult, creatures who don't change, who don't remind you the world is always changing — become extra magical. They live outside the tick, tick, tick that is sending all of us into our futures.

Tom Heyerman wrote there won't be any more "Hobbes and Bacon" strips...at least not for a while, that updating Calvin and Hobbes "is just not what we do." I'm glad.

I think they realized they had perturbed the universe.