Accessibility links
Ants That Count! : Krulwich Wonders... Desert ants have a nifty way of finding their way back home after a foray out of the nest to find food — they count their steps. To prove it, some scientists devised a creative experiment that showed just how the little guys do it.

Can ants count? Not out loud they can't. Not the way you and I count. But an ingenious experiment conducted in the Sahara suggests maybe ants do count.

Harald Wolf of the University of Ulm and his assistant Matthias Whittlinger proposed that ants have "pedometer-like" cells in their brains that count the steps they take.

How Do Ants Get Home?

Most ants get around by leaving smell trails on the forest floor that show other ants how to get home or to food. They squeeze the glands that cover their bodies; those glands release a scent, and the scents in combination create trails the other ants can follow.

That works in the forest, but it doesn't work in a desert. Deserts are sandy and when the wind blows, smells scatter.

So how do desert ants find their way home?

It's already known that ants use celestial clues to establish the general direction home, but how do they know exactly the number of steps to take that will lead them right to the entrance of their nest? 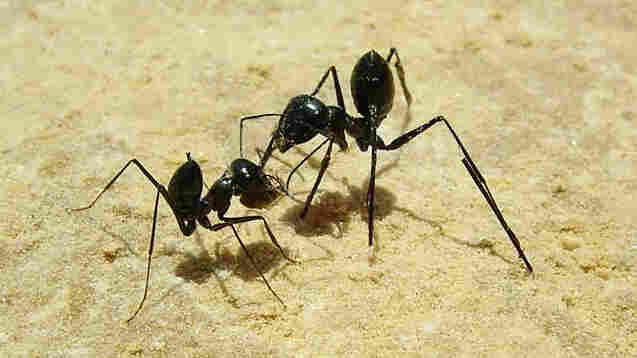 Scientists put stilts on desert ants and discovered that in time, the ants could calculate the correct number of steps it took to get home. Science hide caption

Wolf and Whittlinger trained a bunch of ants to walk across a patch of desert to some food. When the ants began eating, the scientists trapped them and divided them into three groups. They left the first group alone. With the second group, they used superglue to attach pre-cut pig bristles to each of their six legs, essentially putting them on stilts.

The third group had their legs cut off just below the "knees," making each of their six legs shorter.

After the meal and the makeover, the ants were released and all of them headed home to the nest while the scientists watched to see what would happen.

The regular ants walked right to the nest and went inside.

The ants on stilts walked right past the nest, stopped and looked around for their home.

The ants on stumps fell short of the nest, stopped and seemed to be searching for their home.

Says professor James Gould of Princeton, commenting on the experiment: "These animals are fooled exactly the way you'd expect if they were counting steps."

Gould says it's pretty clear ants don't have maps in their heads and don't recognize markers along the route. This experiment strongly suggests that ants do have internal pedometers that allow them to "count" their way home.

Special thanks to OddTodd, our animator, and to comedian Jessi Klein, who provided ant voices in our video.