Accessibility links
A Space Voyage To A Solar System's Genesis : Krulwich Wonders... Telescopes and probes send us images of stars flickering in and out of existence on a somewhat frequent basis. But Hubble has delivered something rare to the human eye: the birth of an actual solar system.

A Space Voyage To Genesis

A Space Voyage To Genesis

Listen To A Puzzler: Where Are The Earth-like Solar Systems?

This was a first for me. The images in the video below are real. They are images (many from the Hubble telescope) patched into a virtual galaxy so we can click our way across the Milky Way to seek out a very particular, very distant star. "What you see here," says author Michael Benson, "is a Genesis. Not ours, someone else's."

Video: See The Birth Of A Solar System

Michael Benson is a reporter, filmmaker and author of a number of books that feature gorgeous pictures of objects in space. He hangs out with a ragtag community of amateur astronomers including "ugordon" from Croatia, "ngunn" from Wales, "nomisn" from Melbourne, "volcanopele" from Tucson, and "floyd" from Boston. Together, they collect images. 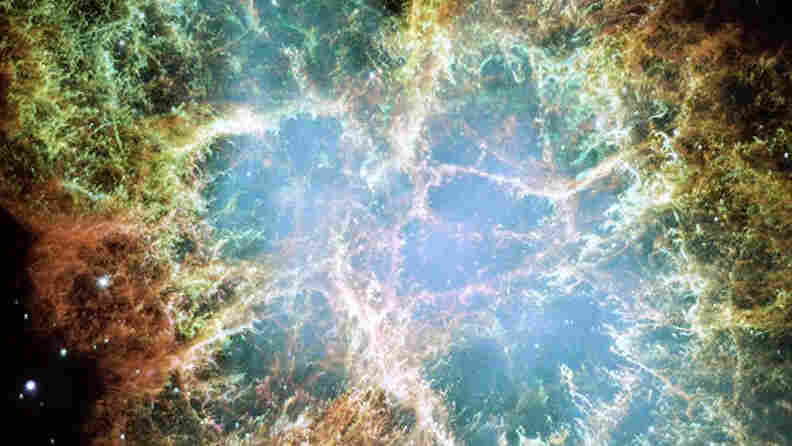 The images aren't theirs. They are mostly images taken by government space telescopes and posted on public Web sites. Benson and the others download the raw digital data, render them into black and white, then edit, colorize, and sometimes animate them. Then they swap what they've done at UnmannedSpaceflight.com and wonder at the amazing things they see.

Benson is really good at this. For example, here's his rendering of the Crab Nebula, which is about 6,500 light-years away. The image came from a space telescope; the color is Bensonl's: a baby blue cloud of gas left over from an exploding star that erupted in A.D. 1054 Earth time. 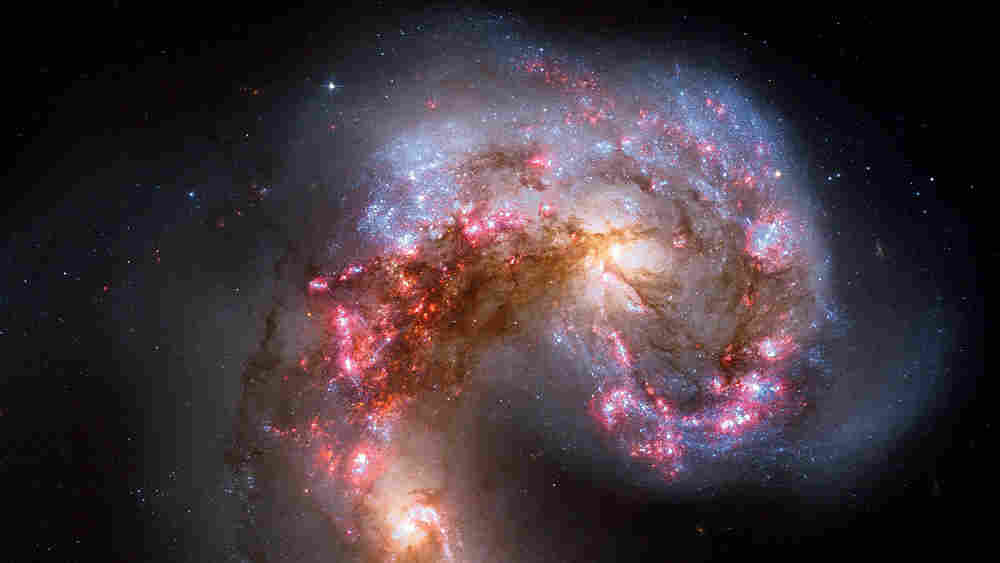 That rich aquamarine is Benson's approximation of what helium, ionized hydrogen plus a dash of carbon, oxygen and nitrogen might look like to a visiting human with slightly larger-than-life eyes.

Here's an amazing one: two galaxies, called "The Antennae," colliding. This image, says Benson, is "a preview of what will happen when the Milky Way meets Andromeda in about 2.5 billion years." 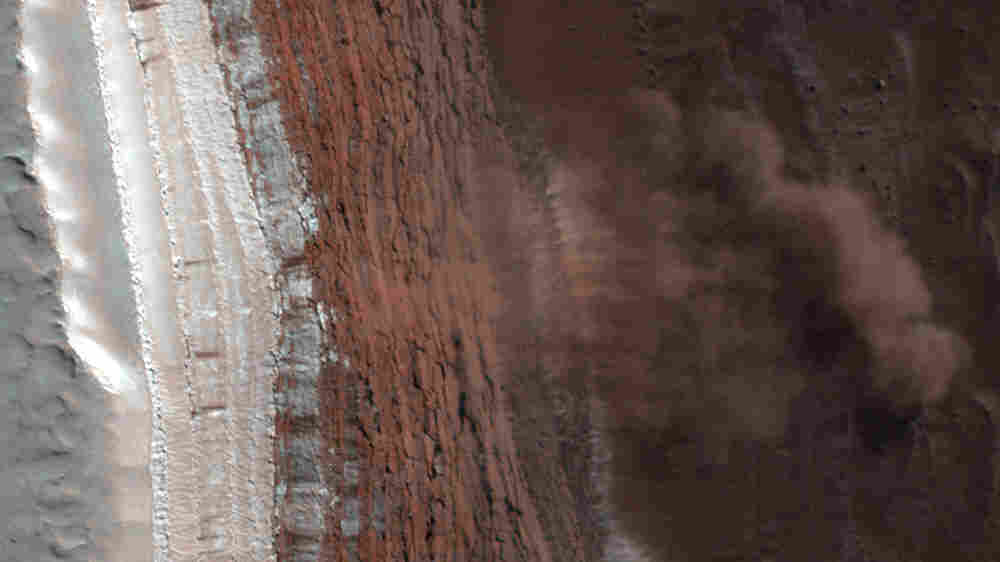 The coolest thing about these images is that they are new. As soon as governments post the data on their sites (Hubble for deep space; Magellan for Venus; Galileo and Voyager for Jupiter; NASA/ESA Hubble for Saturn; NICMOS for Titan; NASA's HiRISE for Mars), this gang of amateur astronomers grabs the images and starts trading, looking, hunting.

While it can take thousands of years for light from distant stars to reach Earth, light from Saturn and Mars gets here in minutes. Which is why solar system pictures have the immediacy of local news coverage. For example, here's a shot from Mars taken by the HiRISE on Feb. 19, 2008, that amazingly captured an avalanche on Mars as it happened! 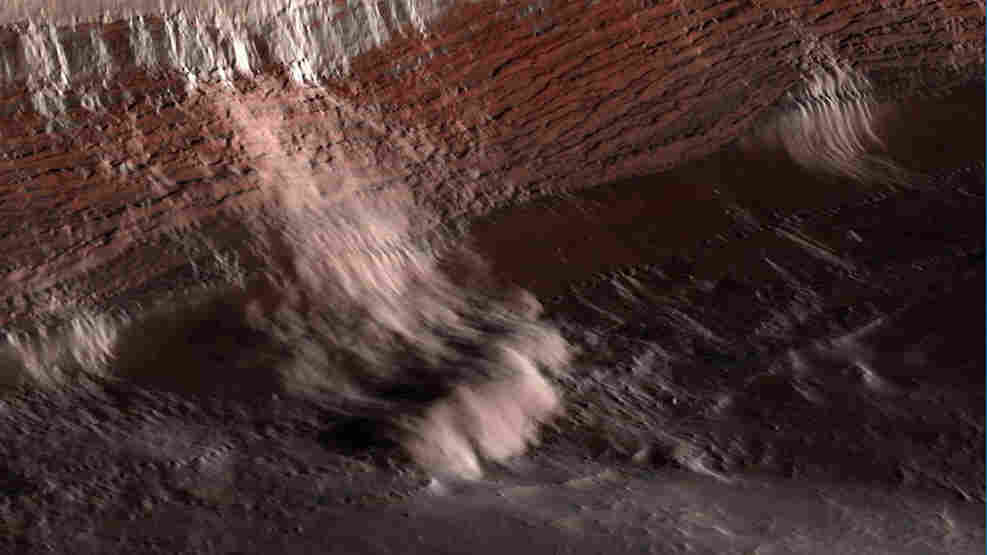 The white stuff on the left is dry ice (CO2 ice) on a Martian ridge. Where the white ends and the rocks turn red, that's actually a steep slope plunging down 2,300 feet, and the dust flying around on the right is rock literally crashing onto a canyon floor. This picture arrived on Earth just after the dust settled. 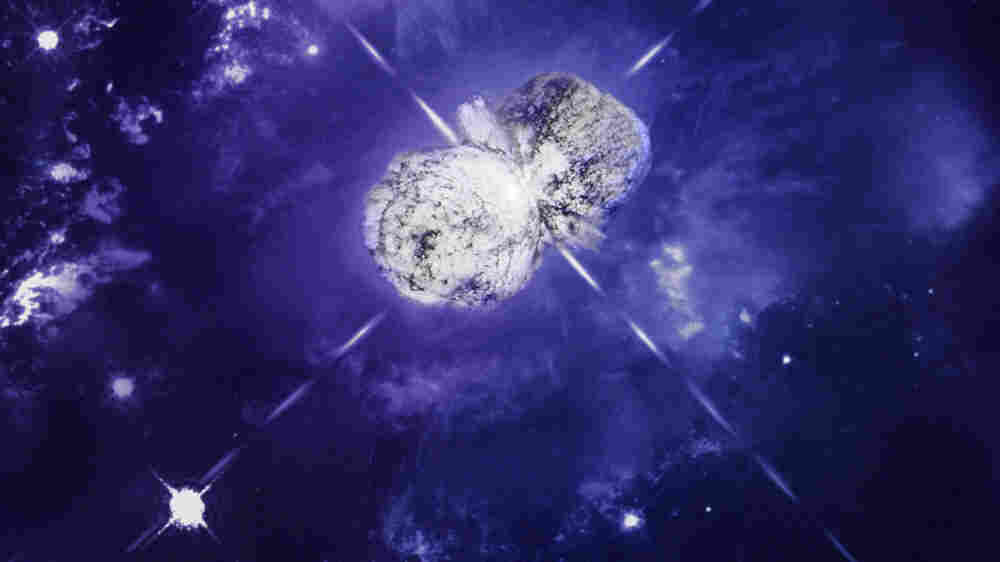 If you're having trouble figuring this image out, check out this just-released reconstruction from Bernhard Braun, one of the UmmannedSpaceflight.com regulars, who, using HiRISE data, gives you a more recognizable view from across the canyon.

The folks at UnmannedSpaceflight.com are a self-appointed, adventurous, often highly talented bunch of colorists, editors, animators, stargazers and photographers — most of them, it seems, aren't scientists — who together have become an unofficial news site, hijacking pictures so the rest of us can see beautiful or dramatic images without getting permission from the governments that took those pictures. They don't need permission. These images are for everyone to see and use as they wish, and there are lots of them. The Mars Rovers alone sent 200,000 images to Earth.

Meanwhile, some of those amateurs have become increasingly famous for their ability to turn the government's data in objects of great beauty. Michael Benson, for example, is about to exhibit some of his photographs at the Smithsonian Institution's National Air and Space Museum in Washington. The picture you see above is a star in our Milky Way, Eta Carinae, that exploded about 150 years ago, but somehow wasn't destroyed. Instead it survives as two lobes of gas precariously appearing to pull in opposite directions.

The lines are created by Hubble's lens. This picture appears in Benson's new book, Far Out (Abrams, 2009), a volume rich with spectacularly shaped galaxies, stars poised to explode and jets of gas shooting across deep space. His last one, Beyond, featured intimate close-ups of loops of flame leaping across the Sun's surface, strange dunes on Mars, and volcanoes sending plumes 86 miles into space near Jupiter.

There are, of course, people who can look at a volcano near Jupiter or a rockslide on Mars and remain, well, unmoved. Why get all excited about rocks falling down a cliff? But when that cliff is 34 million miles away and the image jumps onto your computer so quickly it feels like this happened down the block, suddenly the solar system feels more like a neighborhood. And for a lot of folks, that is a very new, very special, very good feeling.

(If you are a self-styled space adventurer or just curious, you might want to click on the All Things Considered radio story above. It explores the newest quandary in local astronomy: How come the new solar systems we are discovering don't look like they're supposed to? It's a puzzler from CalTech astronomer Mike Brown.)

Special thanks to John Pavlus for the video, Danny Madorsky for his musical score, and to young Brian for his performance of "The planets, the planets..." on the radio broadcast.