Accessibility links
A Mystery: Why Can't We Walk Straight? : Krulwich Wonders... Try as you might, you can't walk in a straight line without a visible guide point, like the sun or a star. You might think you're walking straight, but a map of your route would reveal you are doomed to walk in circles.

Listen To People Attempt The Impossible

A Mystery: Why Can't We Walk Straight?

Listen To People Attempt The Impossible

Try this: Put a blindfold on someone, take them to a park or a beach or a meadow and ask them to walk for as long as they can in a straight line. Then watch what happens:

So why, when blindfolded, can't we walk straight? There is still no good answer. Jan Souman, a research scientist in Germany, co-wrote a paper last year about this human tendency to walk in circles. 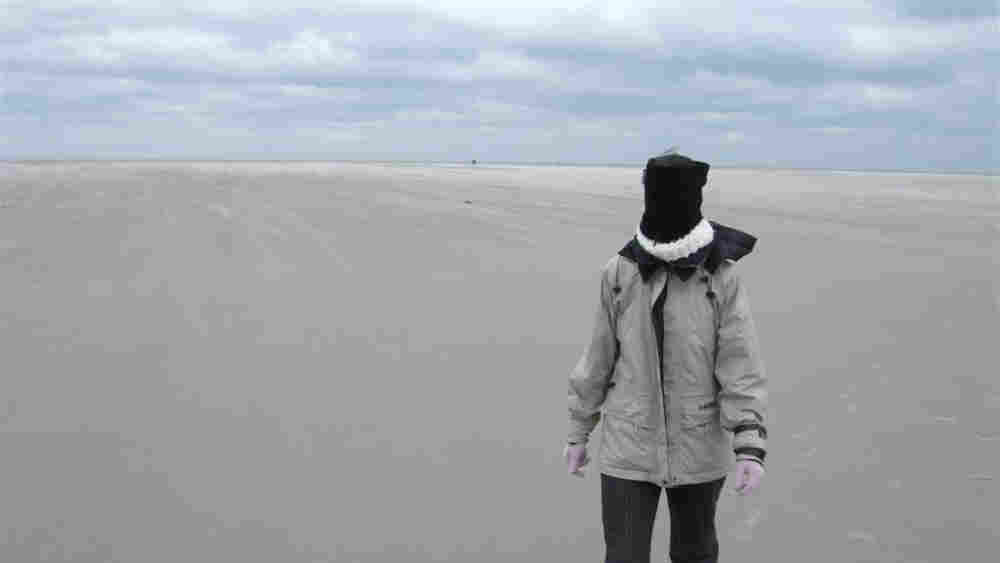 Like Asa Schaeffer in our animation, he blindfolded his subjects (if you can call what he did to them "blindfolding;" it's more like head wrapping) and told them to try to walk straight for up to an hour. 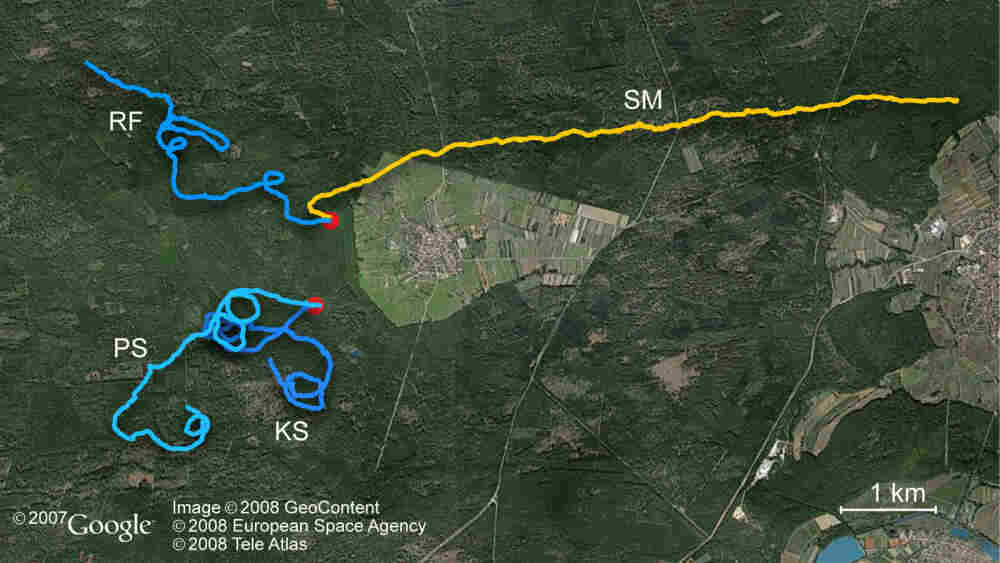 They did this in the Sahara Desert. They did it on a beach. As usual, the blindfolded subjects could not keep to a straight line.

Souman also ran the experiment in Bienwald forest in Germany, apparently without blindfolds. As the subjects walked, Jan mapped where they went. Here's a sample of his results.

Those two red dots mark the start of several walks. He ran these experiments over a series of days.

When the sky was cloudy and visibility low (blue lines), the walkers (labeled KS, PS and RF) were unable to stay straight and began to turn.

When it was sunny (yellow lines), the walker (labeled SM) was able to keep a steady and rather lengthy straight line.

Humans, apparently, slip into circles when we can't see an external focal point, like a mountain top, a sun, a moon. Without a corrective, our insides take over and there's something inside us that won't stay straight.

In our radio broadcast, Jan and I explore (just hit the "Listen" button on this page) possible explanations for this tendency to slip into turns. Maybe, I suggest, this is a form of left or right handedness where one side dominates the other? Or maybe this is a reflection of our left and right brains spitting out different levels of dopamine? Or maybe it's stupidly simple: Most of us have slightly different sized legs or slightly stronger appendages on one side and this little difference, over enough steps, mounts up?

Wrong, wrong and wrong, Jan says. He's tested all three propositions (the radio story describes the details) and didn't get the predicted results. There is, apparently, no single explanation for this phenomenon. He is working on a multi-causal theory.

So like walking in circles, we finish where we started: with Asa Schaeffer's very simple field studies, his graceful pencil lines (especially when our animator Benjamin Arthur gives them beautiful motion) posing the puzzle: How can we be turning and turning and not know it?

These "Turning" field studies appear in Chris McManus' book, Right Hand, Left Hand, The Origins of Asymmetry in Brains, Bodies, Atoms and Cultures (Phoenix, 2002). If you want to check out the extraordinary Benjamin Arthur's animations and drawings, he has a web site at vocaleyes.com/benarthur.