Accessibility links
The Hardest-Working Mom On The Planet : Krulwich Wonders... The giant Pacific octopus can have over 50,000 babies at one time, and spends months guarding those eggs — only to die soon after they are born.

The Hardest-Working Mom On The Planet

The Hardest-Working Mom On The Planet

This is egg laying season, if you're a bird. 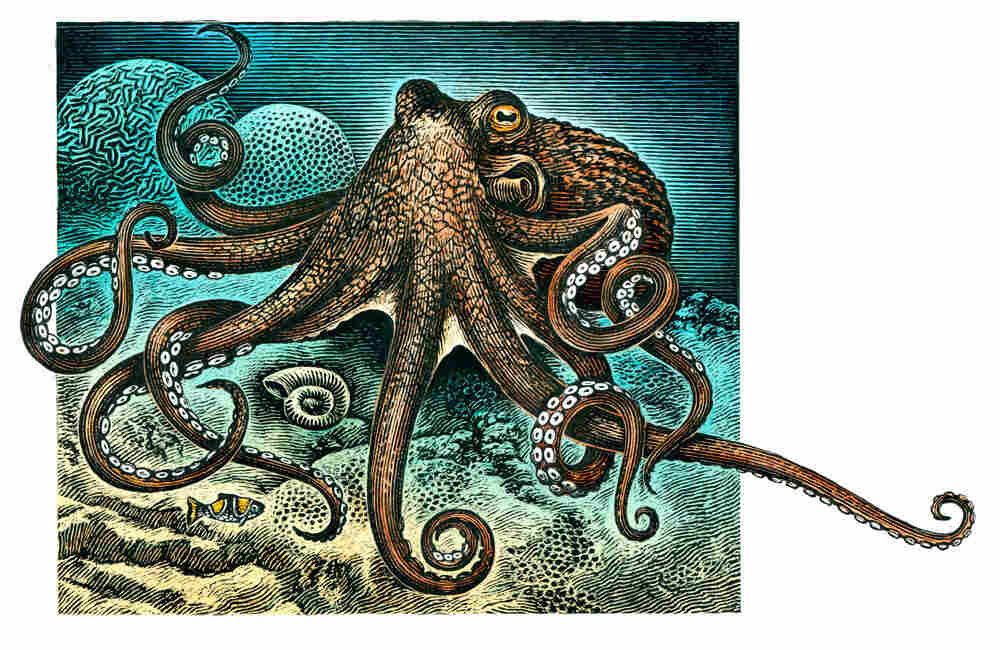 If you're an octopus, particularly a giant Pacific octopus, you've been there, done that. In fact, you died doing it, in what is the saddest mommy story I've heard in a long while. It comes from biologist Jim Cosgrove who describes it all in a lecture he calls, "No Mother Could Give More."

We begin with a pregnant octopus. She's been that way for four or five months, carrying the eggs inside her body until one day, in mid winter, when the water temperature is right, she starts expelling her eggs, one by one, into the water. She will produce (and this will take her a month or so) about 56,000 individuals, who float free until she gathers them into groups, then stitches them into hanging braids, like a bead curtain in a Chinese restaurant. 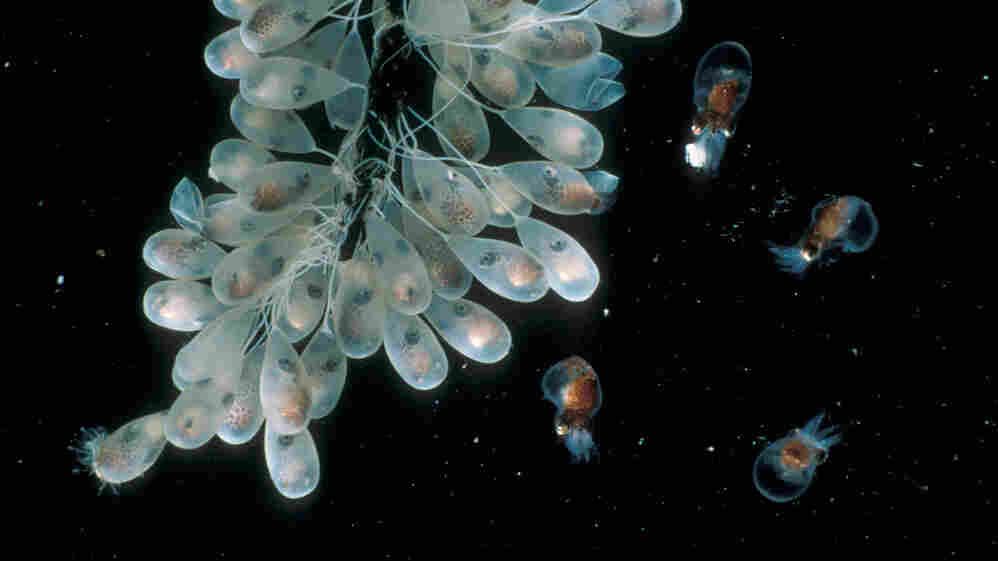 This is her octopus "den." It's usually an underwater cave, protected by rocks that she's put at the entrance to keep hungry crabs, sea stars and fish from getting too close. She's glued about 170 braids to the roof and there she sits, often right under the babies. "Each egg," says Cosgrove, "is a gleaming white tear-drop about the size of a grain of rice." Months pass. All this time, the mother is constantly on guard. 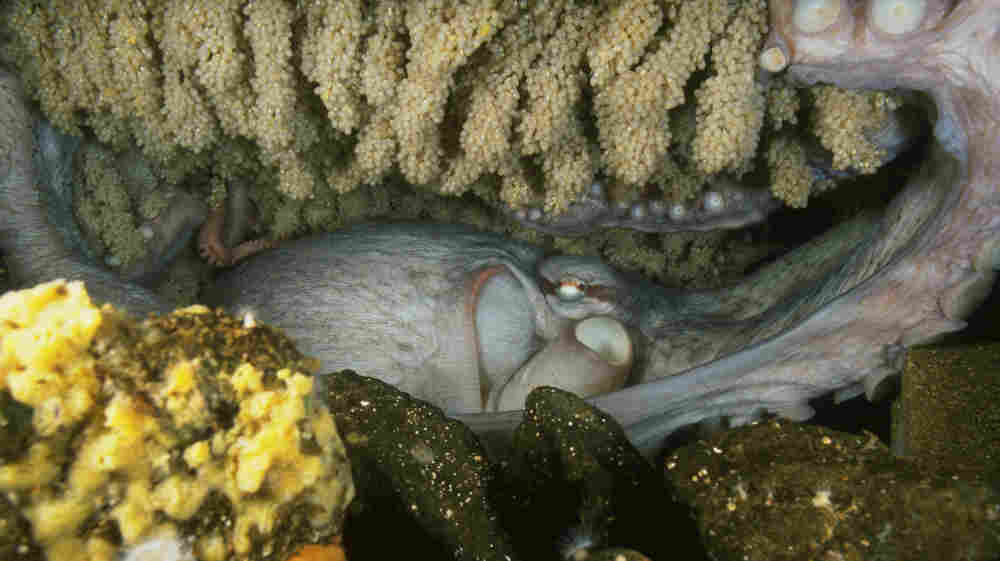 As described by Wendy Williams in her new book Kraken, the mother spends five, six months protecting her 56,000 children:

Throughout this whole period of more than half a year, she never eats...All of the energy in her body is slowly consumed by her work until, by the time the offspring emerge, she has nearly starved to death.

Then one night, though she is weaker, smaller, and says Cosgrove, "her once brick-red color is now a deathly gray and her skin shows signs of decay," her breath now coming in "sporadic gasps," she repositions herself and blows all of her babies out of the den into the open water. It's essential that she use her siphon to blow them free, and once they detach, the babies know exactly what do to, says Cosgrove:

The babies are spectacular. Measuring 6 mm and weighing just 0.029 grams, they are perfect miniatures of their parents. They have 8 tiny arms adorned with suckers. They can change colors instantly and can even produce a miniature puff of ink when they are disturbed. 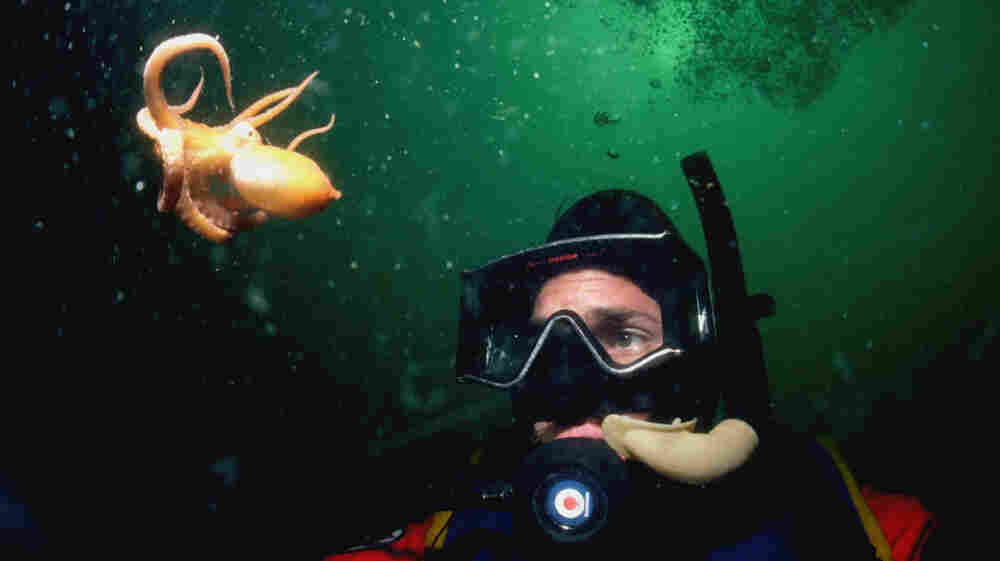 But the mom is near exhaustion. She hasn't eaten for so long (probably because food could attract predators, or because debris from eating could bring parasites near the eggs), she keeps gently blowing water over the babies, pushing them from the den for as long as she can until she herself floats free and sometimes, only two or three meters from the den opening, she stops breathing...and dies.

Her babies? They go straight to the ocean surface, feed there, grow; some will descend deeper into the ocean where they will dodge jelly fish, sharks, blue whales and hope to survive. How many of 56,000 babies make it to adulthood, where they become the largest octopuses in the world?

It took two octopuses, a male and a female, to make the 56,000 eggs. On average, says Cosgrove, the yield is "stable," meaning that the two parents will be replaced by two children. Out of 56,000, after so many months, so much sacrifice, so much care, after all that, mom's "yield" is...just two.

Jim Cosgrove has written a book about octopuses, Super Suckers: The Giant Pacific Octopus and Other Cephalopods of the Pacific Coast (Harbour Publishing); you can read more about his work at the Royal BC Museum here. Wendy Williams' book is called Kraken: The Curious, Exciting, and Slightly Disturbing Science of Squid,(Abrams, 2010).