Accessibility links
Isn't That A ...? Clouded By Imagination : Krulwich Wonders... Look up at the clouds, and many of you will see nothing — while others see amazing images emerge from the sky. Find out where you sit on the bell curve of cloud imagining. 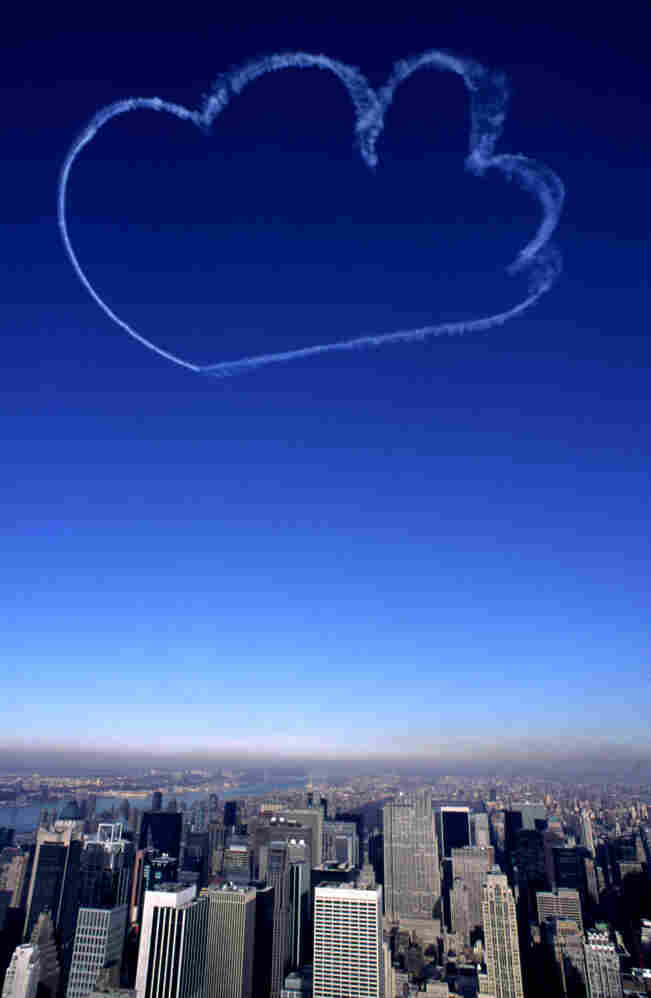 It's getting warm enough now to climb a hill, lay down in the grass, look up at the clouds, and, as Shakespeare once said, "mock our eyes with air." Which you can do ... like in this image by Brazilian artist Vik Muniz.

The cloud, uncannily shaped like a man rowing a boat across the sky, is an accident of time, angle and brain. There is nobody up there, of course. Finding shapes in clouds is something our brains do, and we do it all the time; we have a talent for it. But, in this case, what looks like a man in a rowboat, is not only not a man in a rowboat, it's not even a cloud. It's a photograph of cotton balls fixed to a surface made to look like a cloud, by Muniz, who a few years ago played merry pranks with what we see in the sky. 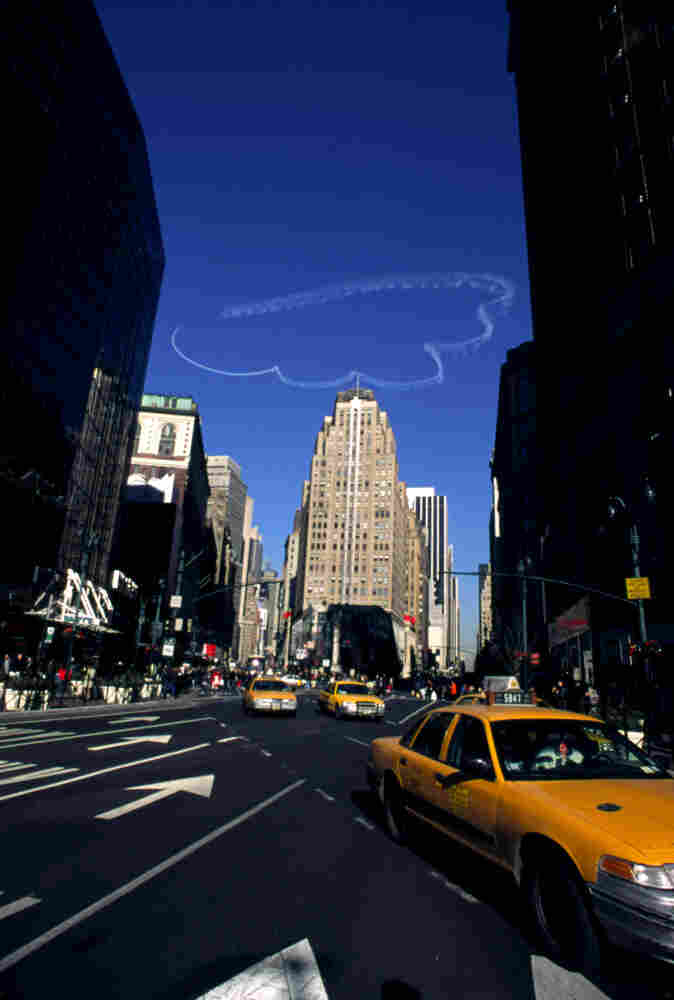 One time he hired a crop duster to fly over Manhattan to draw a cartoon cloud up where the real ones are, so people could glance up and see a fake hanging out with the real guys.

Why We See What Isn't There

Evolution has designed us that way. When our hunter-gatherer ancestors walked through dense forests with random noises and shapes everywhere, it was important to spot a lion, see a snake as quickly as possible. Same for people's faces. A glimpse of eye, a snatch of mouth, (smiling? threatening? friend? foe?), you want to know right away if you want to live.

There's a corner of our brain, the ventral fusiform cortex, where neurons flash information at higher than normal speeds, and where the triggers aren't always precise. We once used these neurons when we were in danger. Now we can use them to play. These neurons survived because if the "face" you saw wasn't really a face but just shadows on the grass, you didn't die, your brain wasn't punished for seeing something that wasn't there. But if there WAS a face, and you didn't see it on time? Then you could be lion food, or have an ax in your head. Your genes didn't make it past that point.

So our brains got used to jumping quickly to conclusions, even if they weren't the right conclusions.

Can You See What Isn't Here? A Cloud Imagination Quiz

That explains why we're so good at seeing things that aren't there. Though some of us, I've noticed, seem to really good at it — athletes of imagination. To see where you sit on the bell-curve of Cloud Imagining, take a look at these clouds. They come from the Cloud Appreciation Society which publishes cloud pictures submitted by photographer/cloud fanciers from all over the world. Each cloud looks like something. Or so thinks the photographer. So look at these images — I've chosen some of the harder ones on their site — this is an AP Course, Higher Level of Cloud Imagining – and see if you can spot what they saw; If you're puzzled, roll over the images below and we tell you the answers ...

Here's my favorite. I couldn't see it at all until I read the clue. It comes from photographer Stephen J.Gledhill.

Once you get told what to see, it's much easier to see it. The real talent here, I think, is to be the first to notice a shape in the sky. And even if you think you're really good at, even if you aced our quiz, there's going to be someone out there better than you. There always is. And we know his name. He was caught cloud-watching maybe forty years ago, when he sat on his own hill with his sister and her slow witted friend. This boy is the LeBron James, the Mozart of Metaphor: He is, of course, Linus. 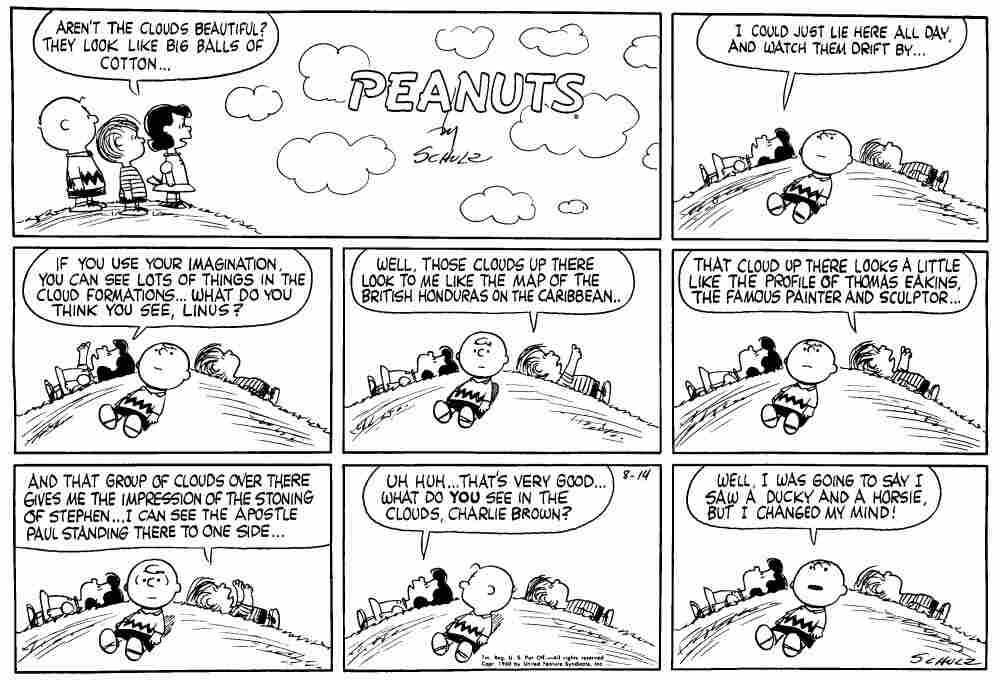 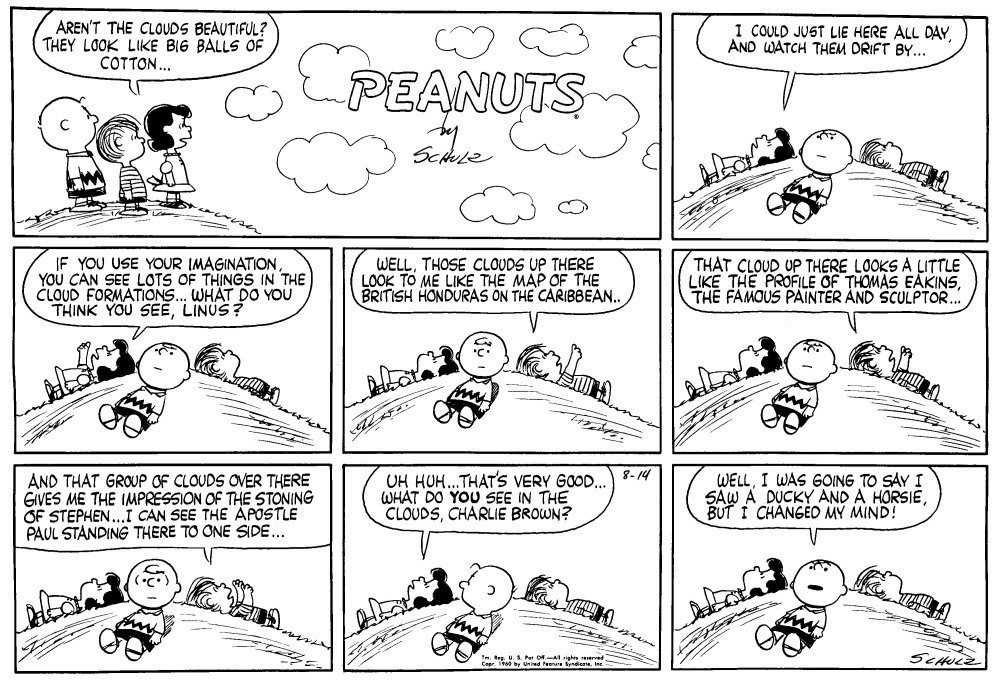 Artist Vik Muniz has moved on from clouds. If you want to see what he's up to ... check his site here. If, by some chance, you have cloud photos of your own to share, please post them to our flickr site here. We'd be happy to post them on this page ... If you've got the clouds, we've got the space.