Accessibility links
Living Very, Very Narrowly : Krulwich Wonders... Just 28 inches at its narrowest point (and four feet at the widest), Etgar Keret's home in Warsaw might be the skinniest home in the world.

There are two apartment buildings in my Manhattan neighborhood that share a block. They sit very close. One is about nine inches from the other. In the small vertical space between them, a horde of finches have built themselves nest upon nest upon nest rising for nine human floors. It's a finch skyscraper. In March and April you can see finches busily flying in and out of this vertical crack, bearing twigs, grasses and nest-building material. By my estimate, at roughly 12 nests per human floor, these birds have created a tower that's 108 nests high — more levels than the Empire State Building.

Finches can do this because they're small.

Now a person has decided to imitate a finch. 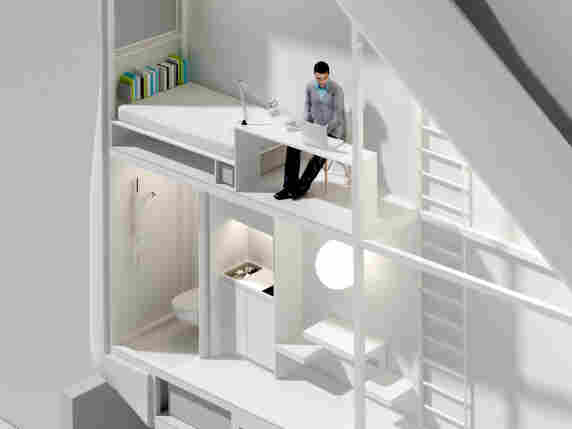 Etgar Keret, a writer from Israel, has commissioned what looks to be the narrowest house in the world. Like the finch skyscraper, it will be wedged between two buildings on Chlodna Street and Zelazna Street in Warsaw, Poland. At its widest point it's four feet across. At its narrowest, it's just 28 inches, that's the width of a front door. The bedroom is, by my count (I'm counting books at the head of the bed) 17 books wide: a trip from bed to toilet will require crawling down the mattress, over a chair, down a ladder and then sideways through the dining and kitchen area. Opening a refrigerator will require stepping into a different room, but hey, some people might find this charming. 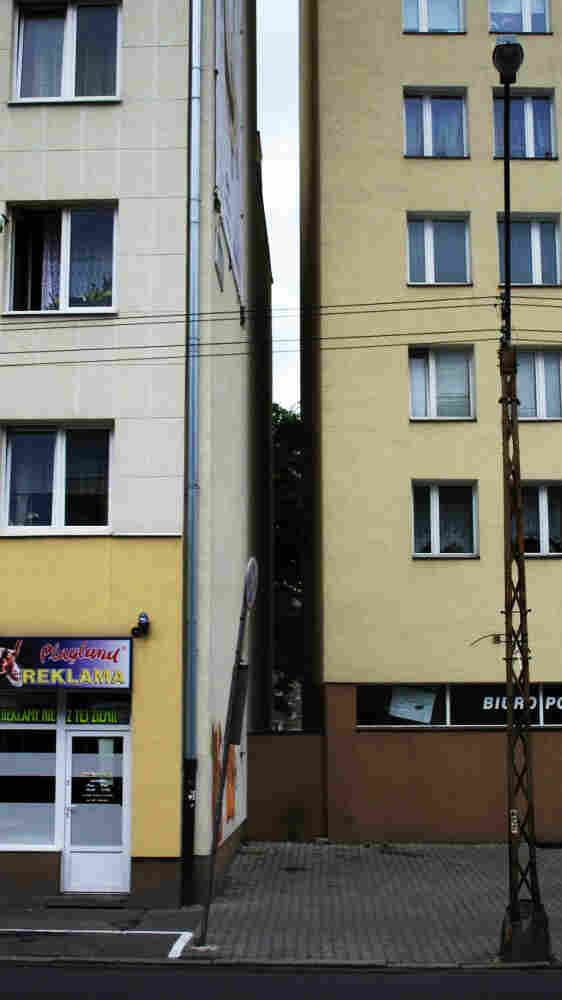 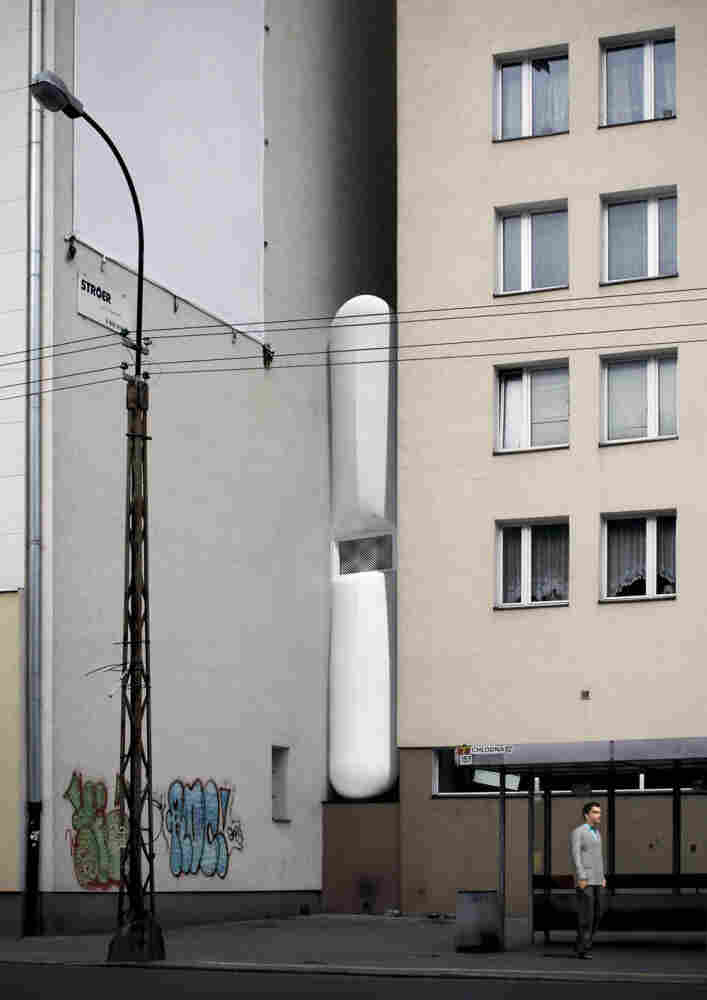 According to Suzanne LaBarre, senior editor at the journal Co.Design:

When construction's finished in December, it'll be the thinnest house in Warsaw and possibly the whole world....[Polish Architect Jakub] Szczesny designed the house to be a work space and home for [Keret]. It'll also be a "studio for invited guests — young creators and intellectualists from all over the world." If, that is, they're willing to drop half their body weight to fit inside.

Kidding, kidding. In all seriousness, though, the house is a pretty remarkable feat of architecture. If everything goes according to plan, Szczesny will manage to squeeze in designated rooms for sleeping, eating, and working. The place will have off-grid plumbing inspired by boat sewage technology and electricity lifted from a neighbor. To save space, the entry stairs will fold up at the press of a button and become part of the first floor."

Here's what it looks like when the first floor is folded up from street level. 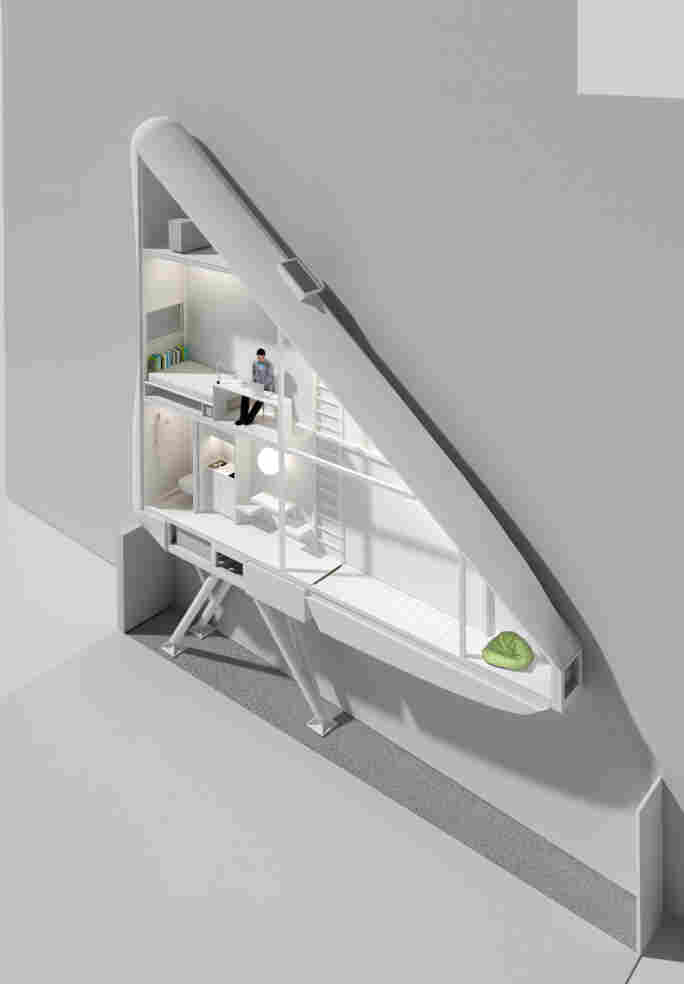 I'm not sure why Mr. Keret wants to live so narrowly. It might be a money thing.

He's certainly not following one of the basic rules of ecology, called the "Size/Abundance Rule", which says bigger animals live farther apart, smaller animals live closer together. Mr. Keret is hundreds (maybe thousands) of times bigger than a finch. His home territory should reflect that. Midsize mammals shouldn't live like midsize avians.

Plus, says editor Suzanne LaBarre, the place is not all that beautiful.

It's been compared to everything from a pregnancy test to a sanitary napkin. (Our vote is for "pregnancy test.") Our biggest concern, though, is that it's hardly got any windows. How's it going to..."become a significant platform for world intellectual exchange," if it feels like a sensory deprivation chamber? Won't Keret go insane? But maybe that's the point. It's not like he'd be the first artist to benefit from going [totally] crazy.

The building will be completed in December. Mr. Keret will move in sometime after that. His admirers will be watching, anxiously.