Accessibility links
Lucy's Laugh Enlivens the Solar System : Krulwich Wonders... We make a lot of noise here on Earth with our TV and radio broadcasts, and some of that sound escapes into space. But how far will our signals travel? Can Lucille Ball's laugh be heard across the universe? 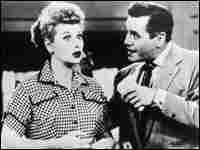 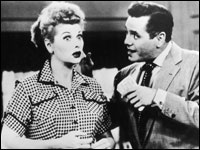 In 1951, when CBS first broadcast the I Love Lucy show, Ricky, Lucy, Fred and Ethel became electromagnetic signals traveling at nearly the speed of light to receivers all over America, where they got bounced on to our living rooms and into our lives.

But not all those signals stayed on Earth.

A few signals bounced off the surface of our planet or shot straight up into the sky and continued onward. Traveling at light speed in empty space, the signals arrived at the moon after a second and a half, says astronomer Chris Impey of the University of Arizona. An hour later, Lucy passed Jupiter. Five hours later, she was at the edge of our solar system. So where is her signal today? "It's traveled for 57 years," says Impey, "and a light year is about 4 trillion miles, so 57 light years is about 200 trillion miles."

That's a long voyage. I Love Lucy passed Proxima Centauri, the nearest star to our sun, around 1955 and has now moved past about 200 stars and who knows how many planets. This raises the question: If there's intelligent life out there, could it hear Lucy?

It turns out that, noise-wise, Lucy has competition.

How Far Does She Go?

In our Morning Edition program (to hear it, just push the "listen" button at the top of this page), Impey reminds us that while the universe may seem silent, it is filled with an ancient form of electromagnetic radiation. Apparently an echo of the Big Bang that many scientists think spawned our universe, this radiation, says Impey, is "everywhere in space. You can't get away from it. You can't get around it. You can't suppress it."

When Lucy's signal first left Earth in 1951, it was much, much louder than the hum of background radiation. But the farther waves go, the weaker they become. So while the signal may travel forever outward, Impey says, it eventually will become impossible to detect. Impey can't imagine an intelligence so subtle, so technologically savvy, that it could pluck an electromagnetic wave from the hum of the universe itself. So at some point, Lucy will disappear.

So how far has she gotten? Impey does some back-of-the-hand calculations and guesses she becomes undetectable "not too far beyond the edge of our solar system."

Which means an intelligent alien would have to be hovering pretty close to catch all the noises we've been making on radio and TV for the last century.

And because broadcasters more recently have been using sophisticated, point-to-point beam-like transmissions from Earth to satellites and back down again, there has been less and less leakage of TV and radio signals into deep space. So much of our chatter is now captured in fiber optic cables or very narrow beams, "we have become probably orders of magnitude quieter in terms of radio leakage than 20 or 30 years ago," Impey guesses.

Frank Drake is a famous Cornell astronomer who now works with the SETI (Search for Extra-Terrestrial Intelligence) project. In a workshop at Harvard University, he says so little sound escapes Earth that, from the "alien" point of view, soon "the Earth is going to disappear."

So if we on Earth are interested in being discovered by other civilizations (and not everyone thinks that would be a good thing), that probably won't happen by accident. It turns out we aren't noisy enough to be noticeable.