This Can't Be Happening

This Can't Be Happening

OK, if you've got nothing else to do for one minute, let me mess with your head.

Below, you will see two circles composed of parallelograms. There's a dot in the middle of the image. Focus on the dot. Move your head in, then move it out. 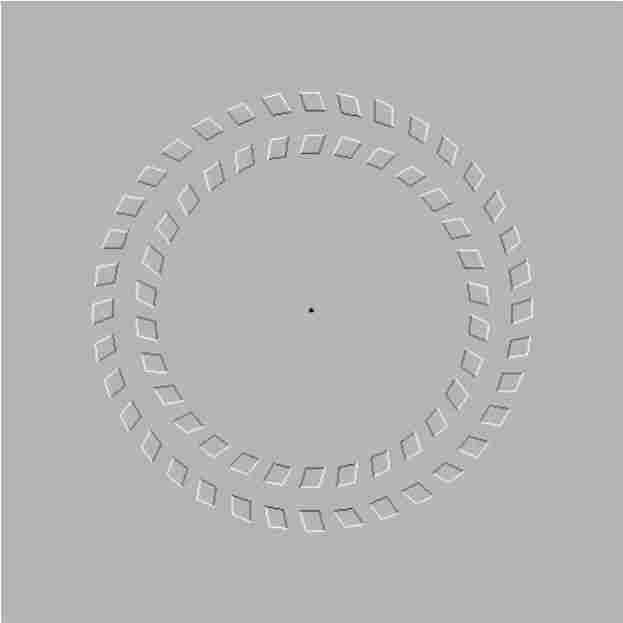 Enlarge this image
B. Pinna 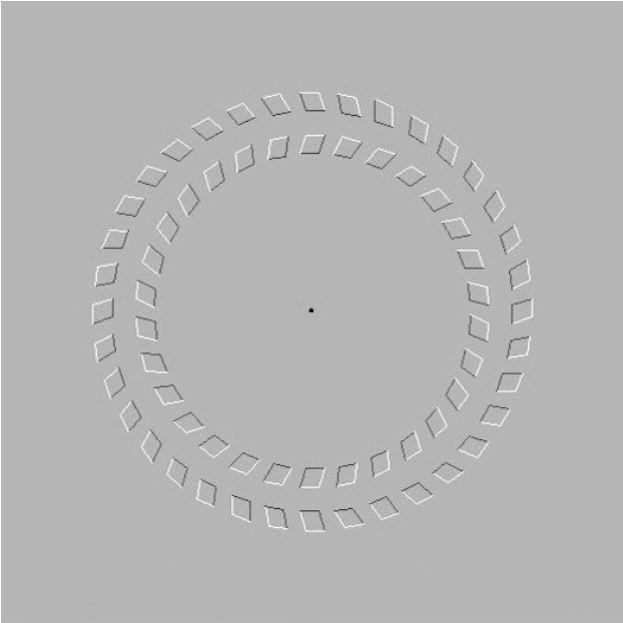 The circles seem to rotate.

(Of course, they don't really rotate; if you focus on a single parallelogram, you can move your head in and out all day and that sucker won't move at all.)

Something curious is going on.

So I went to see an eye doctor (technically, he's a "visual science" professor, Ben Backus, at the State University of New York's College of Optometry) who agreed to explain to me why the circles seem to move.

"We don't see motion directly," he told me. You can have the best eyes in the world, but without a brain, you wouldn't see a thing. These circles in the computer, designed by Dr. Baingio Pinna, are playing tricks on some specialized cells in your brain.

Good luck convincing your visual system to change its mind.

Here's how. Remember how you moved your head toward the computer screen to create the illusion? When you moved, the circles on the screen appeared to get bigger. Your brain should have said "Those circles are moving closer!"

There are cells in your brain that specialize in motion detection. They're supposed to notice the circle expanding. The problem is, each individual cell can't see much. They are kind of like portholes: they can only "see" a small bit of what's out there.

Put the portholes together, you can see the world. But Dr. Pinna is a very clever man. He figured out how to get these cells to tell a lie.

You can do this yourself.

Below you will find an expanding circle.

(Don't look too long, it will make you seasick.)

When you do, the expanding circle will be covered by a series of portholes, the equivalent of your "local" motion detection cells. These little portholes show you what those cells see, but when you step back and view all the portholes together, it gives you the feeling the image is not expanding, but rotating.

Can You See The Trick?

Run your eye across the portholes. Don't you think the thing moving underneath is rotating?

(Dr. Pinna's secret weapon, I was told, is his precise diagonal line. His parallelograms have sharply shaded diagonals. For reasons too complicated to explain here, those angles produce rotation at higher levels in the brain.)

I think it's cool that neuroscientists can understand optics so well they can trick savvy neurons to "see" something that isn't there. This trick really works. No matter how many times you tell your brain "this isn't happening," it still happens.

Well, they are, if they don't make you seasick. So here, very quickly, are three more doozies, all of them from the same Dr. Pinna. Focus your eyes on the moving dot, and the other objects on the screen will appear to shift, slide, and wiggle. They aren't really moving. But your lying brain makes them move.

For a more sophisticated take on these matters, see David Burr and Peter Thompson's paper, Motion Psychophysics 1985-2010 in Vision Research (2011)