Accessibility links
Lord, Save Me From The Krebs Cycle : Krulwich Wonders... Rap songs and colorful videos try to make science accessible to kids, but a dynamic school teacher could be more effective.

Little kids love dinosaurs, bugs and exploring the woods. Science doesn't scare them; they find it fun — until 9th grade. That's when most of us take our first biology class and everything changes. That's when we learn, not because we choose to, but because we know it might be on The Test, and too often, curiosity gets replaced by fear.

For me, of all the fear-inducing horrors of 9th grade biology, the monster in the pack, the highest mountain of meaningless memorization is — do you remember this? — the Krebs cycle.

Oooh, the Krebs cycle. If there were a single moment in high school when kids all over the country lose interest in the life sciences, it's right here: when their teacher shows them a diagram covered with mysterious acronyms, little dots and squiggly arrows pointing in different directions, and says, "This will be on the test." 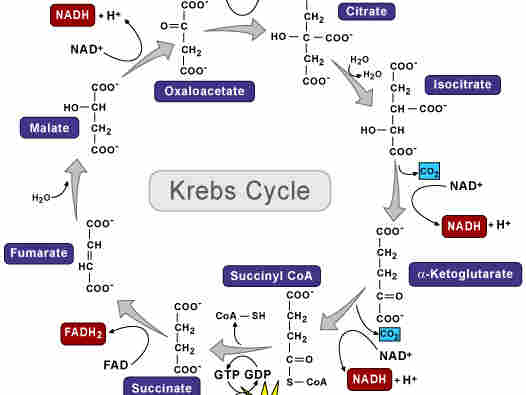 What is the Krebs cycle? It was created by a German chemist, Hans Adolf Krebs (of course, he would have that middle name ... though, truth to tell, he was Jewish and got kicked out of Germany) and it describes, in excruciating detail, how, say, a hamburger (rich with protein and fat) gets broken down chemically in a series of repeating steps, till it releases the energy that fuels the teeny batteries (or mitochondria) in your cells.

How food becomes energy, is, obviously, a very important thing to know, but when it's dumped on you in Learn-All-This-Or-Else form, a lot of 9th graders just get scared. For some people, fear will push them through, but for many more, this is the beginning of the end. This is when you decide you don't want to learn any more science and that the science you're learning is being shoved down your throat like an uninvited hamburger.

But now comes the news.

We are living, you and I (and every 14-15-year-old taking biology this year), in a new world, a world that feels our pain. These days, if you want to, you can zip over to Google, or your favorite browser, write in Krebs, and up will pop any number of alternate guides to the Terrible Cycle.

And many of them will be deliberately, almost giddily friendly. Take this hip hop version, "Oxidate It Or Love It," performed by Derrick Davis, a student at Stanford, and Tom McFadden, a biology instructor there. It's a riff on "Hate It or Love It" by 50 Cent, and "On to the Next One" by Jay Z. It's totally fun to watch, and very catchy ...

But did you understand what they were singing? In its friendly, unscary way, it's just as dense as the diagram at the top of this post. Instead of being frightened and mystified, this song leaves me giddy and mystified.

But we also live in an era of extraordinary popular science writing. So here are two sample paragraphs, just as brilliant in their way as the hip hop song, from Pulitzer Prize science writer Jonathan Weiner. Here's his description of the Cycle:

To power all of its molecular machinery ... each cell contains anywhere from a few hundred to a few thousand mitochondria. And every one of those mitochondria contains a large collection of rotary motors. With every breath you take, you set off a long series of actions and chemical reactions that make those rotary motors spin around and around in every living cell of your body like zillions of turbines, windmill vanes, or airplane propellers. These rotary motors turn out a concentrated energy food, an energy-rich molecule called adenosine triphosphate, or ATP.

And this ATP, more than any other molecule in the cellular inventory, makes all the rest of the machines go. This is the fuel of all our mortal engines. Without ATP it would be useless for us to breathe in air, to drink and to eat. Without ATP, even the smallest piece of action in our bodies would slow down and stop.

You can see why Jonathan gets the big prizes. But as easy as this one is to read, it doesn't give you the details; it isn't meant to, it's a beautiful summary.

So where do you go if you want to explore the Krebs cycle in a dense-but-friendly environment? Is there any realm where Krebs can be digested by a not very sciency 9th grader?

Yes, yes and yes, I say. And here I quote the 19th century educator John Dewey: "Understanding derives from activity." Kids learn when they want to know the answer, when they care. The place to learn the Krebs cycle is any classroom where the teacher knows how to make you want to know. Teachers who teach to the test are failing their students. The videos can help. Popular science can whet the appetite, but when all is said and done, it's the teacher who shows you a hamburger and then shows you a human cell with an impossibly small battery part inside spinning a ridiculously small motor, who says "How can we break this burger down into bite size chemicals and power this motor?" If the 15 year old looks up, and says, "I don't know. How?" That's how you begin: with wonder.

A young teacher, Dan Meyer, who taught high school math for five years, has a similar critique of classroom learning (which is now a TED Talk) that he calls "Math Class Needs A Makeover." If you like, check him out. The extended quotation from Jonathan Weiner comes from his eloquent and moving book Long For This World, The Strange Science of Immortality (Harper Collins, 2010). If you want to see and hear more from Stanford's "Science Rappers," in 2009 they had a web hit with Regulatin' Genes; and for football fans, the Ohio State marching band does a Krebs cycle demo on its 50-yard line that is, in its high steppin' way, incomprehensible.