Accessibility links
The Toughest Little Bird You've Never Heard Of : Krulwich Wonders... The ultimate long distance traveler weighs under 20 ounces, and flies over 7,000 miles to get to its winter home, without making one stop. 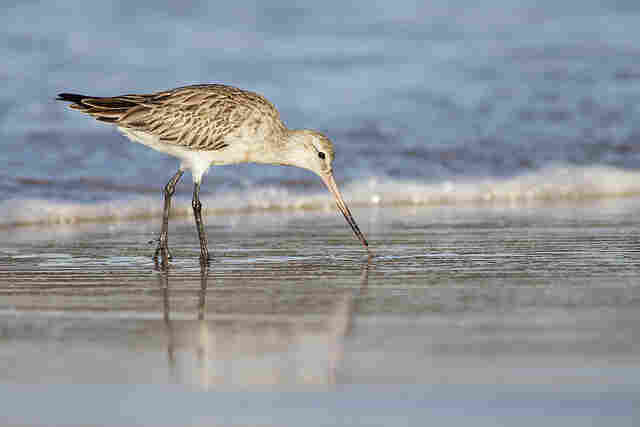 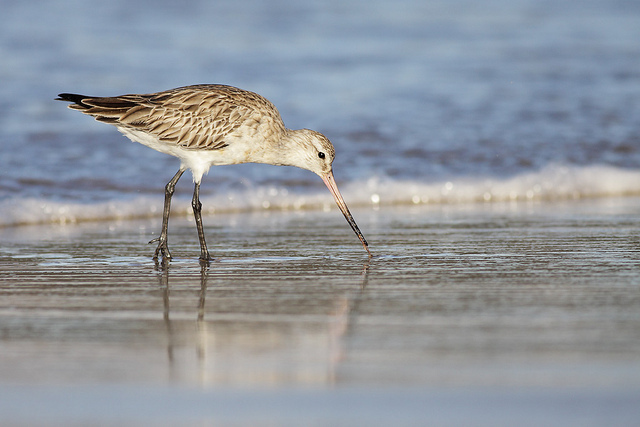 They're nothing to look at. They're not colorful. They seem so ordinary, in mottled brown, black and gray, if you noticed them at all, you'd think, "ah, just another shore bird, pecking at something in the water." But you'd be so wrong. Bar-tailed Godwits are special. So special, they deserve special attention. 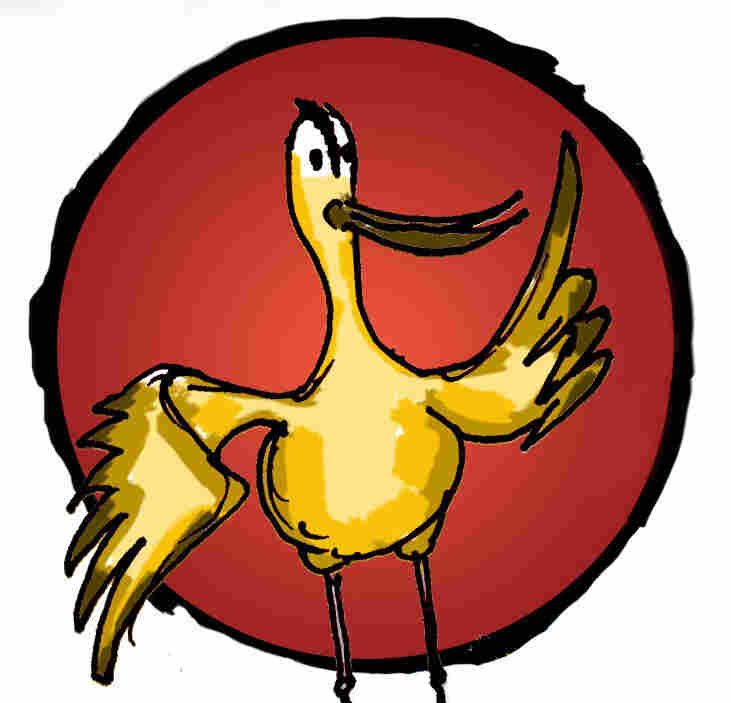 They are the only birds known to fly more than 7,000 miles nonstop, that means no food breaks, no water breaks, no sleep breaks, no pausing, just pushing through cyclones, storms, headwinds, flappity flap, flap for days and nights — and this is their championship season. In September and October, they leave Alaska, head straight for the ocean. Though they are land birds, and cannot fish or rest on the sea, they will cross most of the Pacific Ocean, and fly all the way to New Zealand. Many of them are young, and have never done this before. No other bird can do what they do, and they're doing it right now. 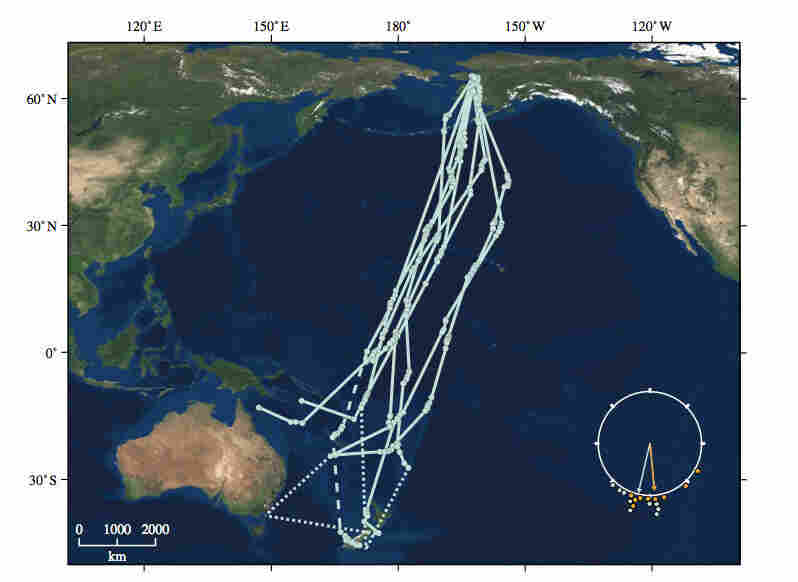 As you read this, a bunch of Bar-tailed Godwits or Kuakas, as they're called in New Zealand, are hanging out in western Alaska, eating a rich medley of clams, worms, seeds and berries, guaranteed to add ounces to their slight frames (check our exclusive Kuaka Workout Program below). They eat so much, they double their body weight. To do that, their intestines and gizzard, not much needed in flight, literally shrink, making space for more fat.

Then they wait. What they want is a good wind to help them south. This time of year, at the Yukon-Kuskokwim Delta in Alaska, the weather often obliges.

According to wildlife biologist Bob Gill and his colleagues at the U.S. Geological Survey Science Center, between late August to early November, roughly "two and five cyclones track into the Gulf of Alaska each month that generate winds favorable for southward departure." So when a storm system comes their way, they somehow know it's time, and off they go, up into the sky, riding the winds, which keep them moving at, Gill figures, an average speed of 35 miles an hour, with storms, gusts and cyclones boosting them south.

Pacific winds will constantly change; both for them and against them. Once they hit mid-passage, equatorial breezes slow, and the bird has to beat his or her way south without much help. They burn half their body weight as they fly, and sleep, bird-style, by shutting down one side of the brain at a time. Past the equator, they bump into the southeasterly trades, which is the runner's equivalent of an uphill slog, pushing them west, so they have to navigate to keep on course.

How they do that, many of them never having been in the southern hemisphere, never having seen the southern stars, nobody seems to know. But they manage. One female, dubbed E7, because that was the code on her wireless transmitter, is the current world champion: she flew 11,680 kilometers (7,369 miles) in 8.1 days. Non-stop. (Gill knows that because the transmitter told him so.)

Nobody Does It Better

What a bird! There are 70,000 of them, but they seem to be losing population. The trek back north in the spring takes them west, to Asia, where they stop and feed. Wetlands are being drained in that part of the world, which may make it hard for them to make the last leg home to Alaska. It would be a terrible thing to have these fierce, athletic birds wink out.

So while they're with us, performing their unmatched Kuaka feats of flight, I think it's only right that we go to bat for them, pr-wise, get them a show on Bravo ("The Real Kuakas of New Zealand"), get them booked on Leno and Letterman, get Mario Batali to reproduce their miracle diet, and — why not? — reach out to other birds who might want to know a little more about the "Kuaka lifestyle."

I asked my friend Josh Kurz to work on a few ideas — he has dabbled in advertising — and he came up with an ad that celebrates these birds so much, you're going to have to click on it two times to read it all. It's aimed, strangely, at owls and turkeys — who don't share the Kuaka's migratory urge, but hey, Josh is just publicizing what the rest of us — human, bird, whatever — really ought to know: that these birds may look puny, but under those plain brown feathers lies a mighty heart.

Illustrator (and reporter/producer) Josh Kurz regularly contributes to this blog. He recently illustrated a story about the last living wild cycad and before that produced an enormous stack of fish cans to illustrate acceptable ways to spell the word mackerel.